Behind skyscrapers and modern fashionable downtown areas hides the world of shitamachi. “Shitamachi” literally means “lower town” and refers to downtown Tokyo, the areas located on the east side. These areas surrounded “higher” Edo (the old name for Tokyo) castle and along the Sumida River, where Tokyo’s original center started developing. The lower city was inhabited mainly by lower working classes as opposed to the higher classes who lived on the western side of the city.

According to Western imagery, we define a downtown as a specific area usually connected to the idea of a modern financial and economic hub of a metropolis. However, the Japanese “shitamachi” is completely different and encloses the quintessence of a traditional and authentic Japanese atmosphere almost lost in districts such as Shinjuku, Ginza, or Akihabara.

It is impossible to pinpoint one particular “shitamachi” area in the whole city since Tokyo has developed many different “downtown areas” due to its huge urban landscape.

Let’s discover the five shitamachi areas in Tokyo you need to visit to dive deep into the nostalgic atmosphere of an untouched old Edo. 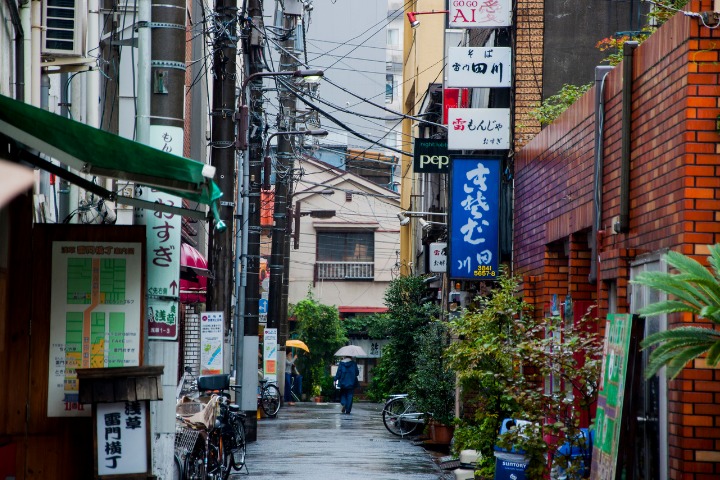 Probably the most widely known shitamachi area in the city, Asakusa’s origins date back to when the famous Sensoji temple was founded in the 7th century and has been a leading entertainment district for many centuries.

Around the landmark of Sensoji Temple, Asakusa Shrine, and Nakamise Dori—a long shopping street that connects the temple’s main gate to the main building and dates back to the 18th century—dozens of small shops surround the area. Head out further west towards Kappabashi or Kagurazaka, or cross the Sumida river to get to the Mukojima district.

Mukojima is another shitamachi area, but since it’s not usually covered by tourist guides, it holds a more authentic atmosphere than Asakusa.

The areas of Yanaka, Nezu, and Sendagi are quiet neighborhoods just north of the Ueno area and probably one of the most well-known shitamachi areas in Tokyo after Asakusa. Yanaka Ginza (the word “ginza” meaning “shopping street”) is the center of this area where activities are concentrated—the locals gather together in the lively 200m-long shopping street.

Thanks to the nostalgic and peculiar environment, the influx of tourists is getting bigger and bigger, but nonetheless, the area still retains its local and authentic atmosphere, and it feels like traveling back in time to the Showa Era (the 1980s). Enjoy local street food such as “menchi katsu” (ground meat cutlet) or “korokke” (potato croquettes) or sit down on a stool and taste some locally brewed nihonshu at the sake shop at the end of the street. 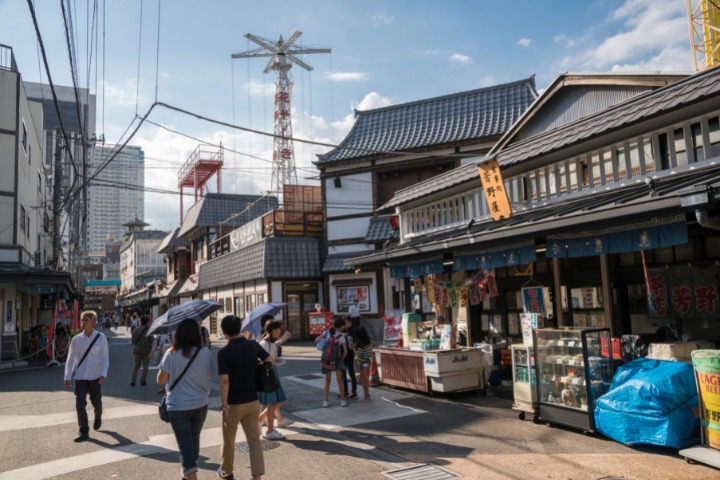 Affectionately known as the “Harajuku for old people” in reference to the district’s average consumer age (which is indeed quite high), Sugamo is a neighborhood on the Yamanote line in the northeast area of Tokyo where the older generations of Tokyoites come together. Strolling around the long Jizodori street packed with small shops, you can witness the daily life of locals running around on errands. Buy some red underwear for good luck—which is a must-do in Sugamo, or indulge in some wagashi (和菓子, traditional Japanese sweets) sold widely around the area.

Ameyoko shopping street is located between Okachimachi and Ueno stations. The history of the area goes back to World War II, when the shopping street developed into a black market. Today it is an open-air market with a diverse variety of shops (ranging from clothes to cosmetics) and food stalls ranging from traditional Japanese dishes such as soba to other Asian cuisines.

If you are looking to get your fabric fix for your next sewing project, Nippori is the place to go.

Nippori is widely known as the largest fabric district in the whole metropolitan area of Tokyo. It retains a cozy local atmosphere since most of the shops have not been renovated, and they still seem to be run by energetic “obaachan” and “ojiichan” (old ladies and old men).

Why Downtown Tokyo is a Must Visit

Tokyo’s shitamachi retain all the traditional Japanese charm and are some of the most laid-back areas of the city—the tranquil local setting is striking as opposed to the chaotic and fast-paced western side of the city. These five shitamachi, which are a must-visit if you are in Tokyo, are the perfect representation of the coexistence of old and new and traditional and modern within the Tokyo metropolis.