Things To Do in Kamakura: A Weekend Guide | Guidable

Things To Do in Kamakura: A Weekend Guide

Located an hour south of the hustle and bustle of Tokyo, this small county on the ocean is a welcome reprise. Beaches are beautiful here, and during the summer, their warm sands are a popular pilgrimage for tourists and locals alike. The streets are full of culture, traditional shops and delicious street food, there’re lots of things to do in Kamakura!

A Guide To the Best Things To Do in Kamakura

A great bronzed buddha sits patiently above the shore awaiting your arrival. Take the hiking trails that link up the many temples. A train heading Southward takes you to Kamakura station to the beaches, hiking paths, and temples. Kamakura is soaked in history, sun, and tradition. Sometimes it’s called the Kyoto of the East. Today, we’ll focus on the history, locations, things to do, and why it’s one of the hottest areas.

To start we’ll have to go way back in time. 10,000+ years ago, the first Neolithic tribes settled there. They used stone and obsidian tools. Back then, in the Jomon period, most of Kamakura lay under the waves, when the sea levels were higher than they are now. Settlers lived in the hillsides that surround the bay. Kamakura is located within a valley that opens to Sagami Bay.

Notoriously hard to access, Kamakura in ancient times could only be entered through seven manmade passages. So-called the Seven Entrances (Nana-guchi), these “mouths” into Kamakura were first recorded in 1450. At the beginning of the Kamakura period, it is said that Minamoto no Yoritomo (the first Kamakura shogun) chose the area for its difficulty to enter. These were vital to the area’s defense and were modified to this end; fortifications and traps were added along the roads to stop invaders. 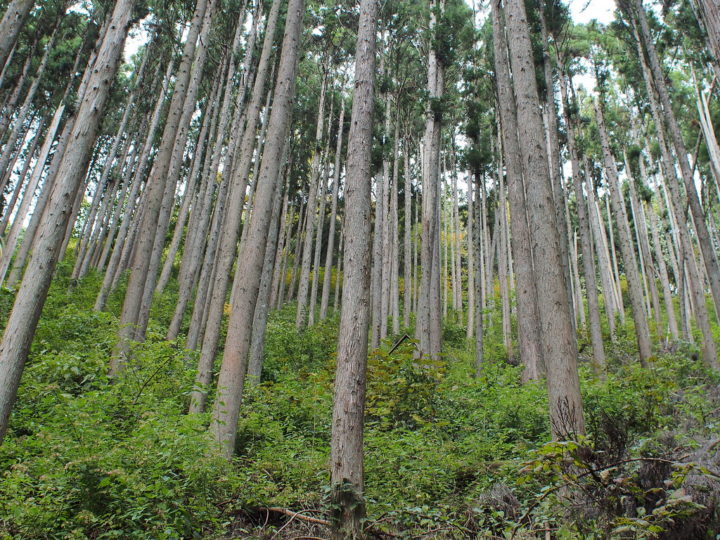 Kamakura is a rainy and temperate city. Even during January, the driest month, rainfall averages at 57 mm; June is the wettest month with an average of 216 mm of rainfall. Compare this to the national average rainfall of nearby Tokyo. 43 mm of rainfall is Tokyo’s average for January. Just 60 km from each other, Kamakura’s average rainfall is just over 32% higher. Average temperatures are relatively similar. The two cities hottest month (August) has the same average high of 29 centigrade and a low of 23 centigrade. Humidity in Kamakura is the same as in Tokyo if not lower. All and all Kamakura’s climate is mild and comfortable, but expect lots of rain.

What To Do in Kamakura

Asaina, Daibutsu, Gokuraku, Kamegayatsu, Kewaizaka, Kubukurozaka, and Nagoe are the names of the seven entrances. Connecting West to East, Asaina pass was constructed in 1241 to connect Yokohama to Kamakura. Legend has it that the man responsible for the trail’s namesake (Asaina) cut the path through the hills in one night. Today, it’s a well-walked historical landmark that features terrific forest views, impressive rock faces, and Kumano shrine along the way. Asaina pass’ hike should start at in Yokohama as traffic to Kamakura can congest the roads. Expect a muddy trail even during the dry summer.

Daibutsu moves through Yamazaki and Kajiwara to connect Kamakura with Fujisawa to the West. Not much is known about the origins of this historic past, and its reputation is eclipsed by the Asaina pass. Nonetheless, Daibutsu is renowned as one of the best hiking trails in Kamakura. Spanning the Western hills, Daibutsu is short at just 3 kilometres. Taking roughly an hour and a half, you’ll start at the Jochi-ji Buddhist temple and end at the Daibutsu Temple (where the great bronzed buddha sits). Along the way, you can make a detour to Zaniarai Benten Shrine. Under Benten’s watch—the goddess of everything that flows—wash your money here in natural spring. According to legend doing so will make your money flow. 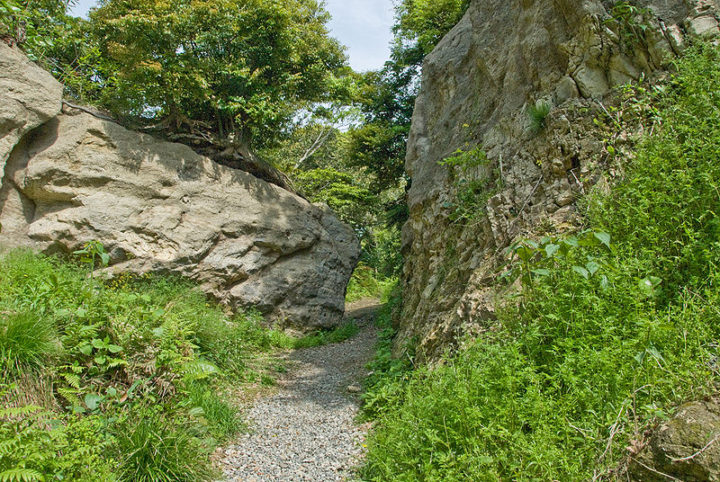 A flattened hill, Gokuraku pass is now just a road in front of Gokuaku-ji (another one of Kamakura’s many famous temples). It follows the coast down the cape of Inamuragasaki—South West of Kamakura. Plainly, Gokuraku comes to the sea. Along the way, however, the road meets up with the Tokaido (Eastern Sea Route) road—used famously during the Edo Period 1603-1868 as a trade route. Most notable in Gokuraku’s history is the year 1333. That year the head of the Nitta clan, Nitta Yoshisada, laid siege to Kamakura by way of Gokuraku. In support of Emporer Go-Daigo in Kyoto, he won a decisive victory against the Hojo clan (then holders of governmental power in Japan) by capturing Kamakura. 1333 was the end of the Kamakura period.

Kamegayatsu is Kamakura’s Northern connection. Between Ogigiayatsu and Choju-ji temple. Its most notable feature is its Incline; owing its name to this, the road is sometimes called Kamegaeri-zaka. The pass was given its name because turtles were said to flip whenever trying to climb it.

The most militarily contested of all routes into Kamakura, Kewaizaka Pass was the battlegound for several from 1333 onward. The first of these was Nitta Yoshisada’s famous invasion that was also felt on multiple other passes (including Gokuraku). Unlike Gokuraku, this pass was central to that invasion. There are two main theories to how the pass got its name; A shogun of the Taira clan was said to have been beheaded in decorated with makeup, so they named the pass after it. The other theory is that a brothel existed nearby that gave its name to Kewaizaka Pass. To hike it the pass, walk a kilometre from the JR Kamakura station towards Kaizo-ji temple. Beginning on the path will lead you on a steep zig-zag path toward Genjiyama Park. You’ll know you’re at the park when a statue of Minamoto no Yoritomo greets you

Dated to at least 1235, Kobukurozaka lies in the North-Eastern part of Kamakura. It connects to Yamanouchi (Kita-Kamakura). At the pass’ end is the current road to Yamanouchi. Along the way, you’ll meet up with the Kencho-ji temple and walk the same path that Nitta Yoshisada’s troops did in 1333.

The final pass, Nagoe, is just 2 meters wide in some places and very steep. Connecting Eastern Kamakura to the Miura Peninsula, the pass got its name for its notorious difficulty to cross. Of all the passes, it is one of the most well-kept. A hike through the area features high rock cliffs on all sides. During the Kamakura period, Nagoe pass was said to be the most crucial of all passes militarily. Marching through the pass would allow access to Yokohama and Tokyo (Edo) to the North. 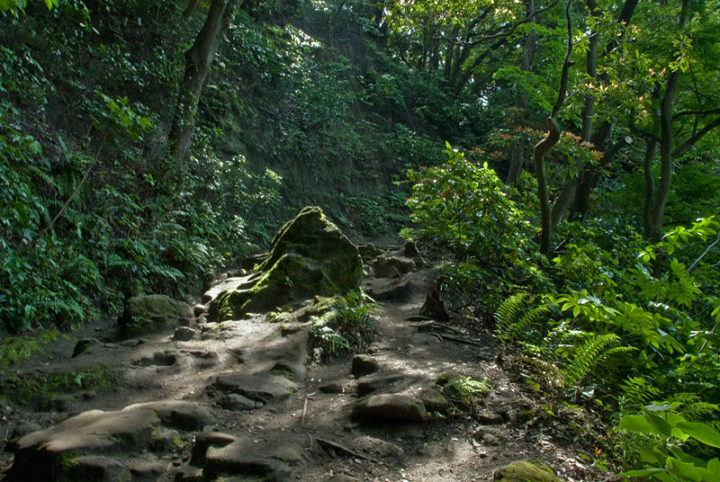 There are so many temples and shrines throughout most of the area in Kamakura. During the rule of the Kamakura Shogun, Buddhism had an especially strong hold on Japan. Hiking in the area will give you a scenic overview of the religious offerings across Kamakura, but a more involved approach is needed.

Of all the Buddhist temples in Kamakura Kotoku-in is the most famous. There are two good approaches to the temple. Either by leaving Hase station you walk North a short distance, or when leaving the Daibutsu trail walk East. What the temple is most known for its massive Amida Buddha statue. The statue is thin-cast from copper giving Buddha a green patina. He once lived indoors, but in the 15th century, a tsunami destroyed the entire temple around him. Since then, no new housing has been constructed. You can even enter the statue for an extra charge. One of my favorite features of Kotou-in is Buddha’s sandals; on display is a massive pair of sandals. 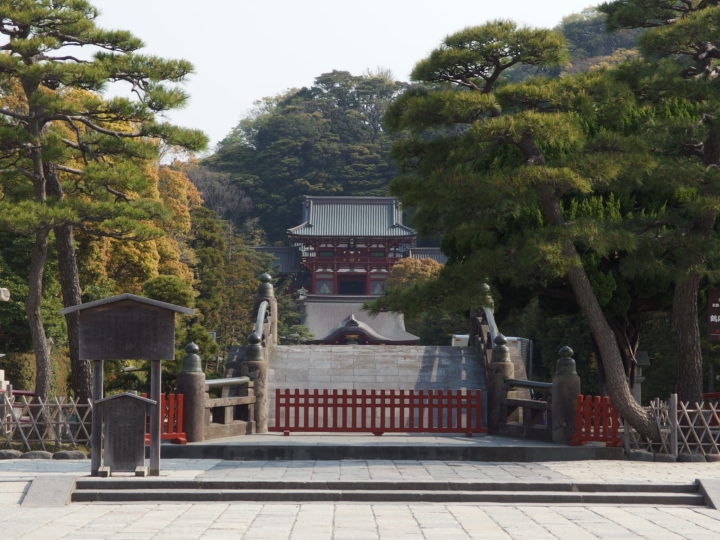 Nearby to Kotoku-in and the Daibutsu trail entrance is the Hase-dera Temple. Home to another massive figure, within the temple compound, is a gilded camphor wood statue of Kannon. Hase-dera’s statue is smaller but still stands at 9.18 meters making it one of the largest wooden statues in all of Japan. Of note too is the legend around the temple. Supposedly, Hase-dera was completed in 736 which would make it over a millennium old. Hase-dera features also a network of caves devoted to Benten (the sea goddess) and beautiful views of Kamakura.

The oldest Zen training monastery in Japan, Kencho-ji is one of the Five Great Zen Temples across the hilltops of Kamakura. In history, the Hojo regents formed its principal patrons. Tangentially, Kamakura’s 5 great Buddhist temples gave the area great influence in both religion and politics.

Kencho-ji is structurally massive. Before a wealth of fires burned down several of the buildings, there was a full shichido garan and 49 subtemples; shichido garan refers to the ideal format for a Zen temple compound. Highlights include several national treasures including the centuries-old temple bell (Bonsho), a massive Buddha hall (Butsuden) moved from Tokyo in 1647, a grand gate (Karamon) brought with the Butsuden, and a large Zen garden.

Taking a step away from Buddhist temples, Shinto shrines play a large part in Kamakura’s history. Particularly, Tsurugaoka Hachimangu was founded in 1063 then expanded and moved in 1180 by the first shogun of Kamakura (Minamoto no Yoritomo). By no coincidence, the shrine is attached to Hachiman who is the patron god of the Minamoto family and samurai on the whole.

Located in the center of Kamakura, throughout the town a path leads up to the main complex with accompanying torii gates. It’s an impressively large shrine alone but has a number of most interesting features. For instance, upon entering the compound there are two opposing ponds on left and right. One, with three islands, symbolizes the Minamoto clan. The other, with four islands, represents the Taira clan. These ponds are named the Genpei Ponds. There are red lotuses in the four-island pond to symbolize the spoiled blood of the Taira clan. On the other hand, is the Minamoto’s three-island pond with white lotuses to symbolize prosperity. 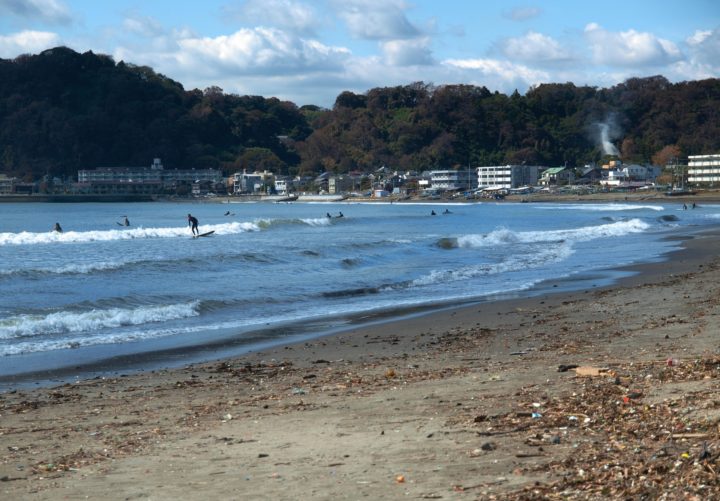 Going to the Beach

There are two primary beaches on Sagami bay: Yuigamahama and Zaimokuza. Swimming and sunbathing here have been a loved pastime since the Meiji period (1868-1912). At close to one kilometer in length, there’s enough room along the shores for a large number of people. If you’d like, surfing and bodyboarding lessons can be had here. Throughout the official beach season from July to August a lifeguard watches the beach from 9:00 to 17:00.

Find More Things To Do in Kamakura

Getting to Kamakura is as easy as an hour-long train from Tokyo. Prices vary, but you’ll most likely spend less than 2,000 JPY getting there. Really there’s no excuse to miss this cultural and historical landmark in Eastern Japan. Whenever you have a long weekend, grab a train and explore the many hiking paths, temples, and beaches at home in Kamakura. 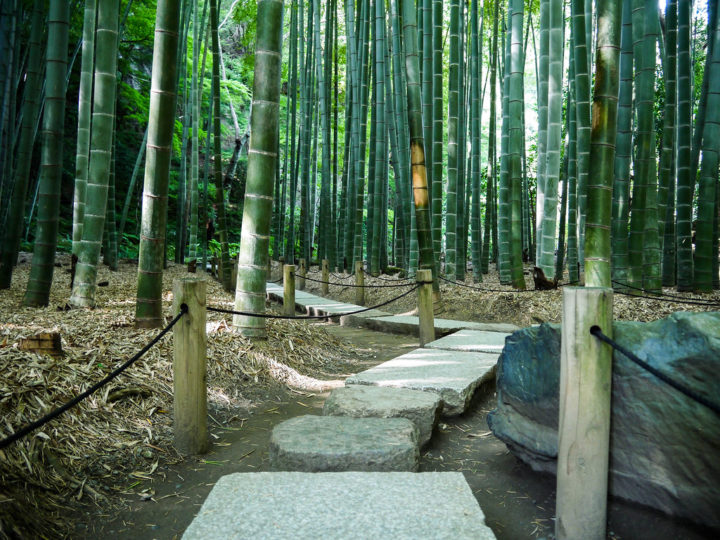 Read more about Kamakura on the official site (Japanese only): https://www.city.kamakura.kanagawa.jp/