A Visit to the World of Japanese Artwork | Guidable

Japanese artists whose artwork have attracted attention across the world of arts include; Katsushika Hokusai’s “The Great Wave off the Coast of Kanagawa”, Kitagawa Utamaro’s “Three Beauties of the Present Day”, Utagawa Hiroshige’s “Clear Weather after Snow at Nihombashi Bridge”, Suzuki Harunobu’s “Young lovers under an Umbrella in a Snow Storm”, and many more… In this article, I would take you on a visit to the world of Japanese arts. We will travel in time to look at some Japanese works of art like Suibokuga 水墨画 which was imported from China during the Kamakura period, and traditional Japanese works of art Ukiyo-e 浮世絵 from the Edo period.

Suibokuga is Japanese water and ink painting, also known as sumi-e. This style of painting came into Japan along with the Zen Buddhism during the Kamakura period. A prominent artist of this type of painting is Sesshū Tōyō (雪舟 等楊). His works include; “Landscape of the Four Seasons, four landscape scrolls”, the “Broken Ink Landscape Scroll” (Haboku sansui-zu 破墨山水図) and so on. Last year in June when I participated in a class excursion, I had an opportunity to see some of these artworks (suibokuga) at Idemitsu Museum of Art (出光美術館, located in the Marunouchi area of Chiyoda, Tokyo (東京都千代田区丸の内) . The Exhibition (2017/06/10―2017/7/17) showed the works of Sesshū and Hasegawa Tōhaku, two Japanese artists who are very important when considering the styles of suibokuga. Two representative works from Idemitsu Museum’s collection, Sesshū’s “Haboku (Broken Ink) landscape” and Hasegawa Tōhaku’s “ Crows on Pine and Egrets on Willow” were displayed together with a selection of masterpieces from Chinese and Japanese paintings. If you are interested in exhibitions like this, Idemistu Museum of Arts has several exhibitions from time to time all year round. You can check out museum’s exhibition calendar here: http://s-idemitsu-mm.or.jp/en/exhibition/

This literally translates to pictures of the floating world. It is a typical Japanese genre of woodblock painting from the Edo period circa late 17th century. Ukiyo-e firstly became popular through Hishikawa Marunobu’s paintings and monochromatic prints of beautiful women. Generally speaking artists of Ukiyo-e painted female beauties, kabuki actors, sumo wrestlers, scenes from history and folk tales, landscapes of Mount Fuji and so on. Ukiyo-e illustrates the richness of Japanese culture. It inspired many artists around the world. One of them is the famous Dutch artist Vincent Van Gogh, Van Gogh did some works already done by Japanese artist Utagawa Hiroshige; for example; Bridge in the rain after Hiroshige.

Let us look at some Japanese artists renowned for Ukiyo-e style.

Katsushika Hokusai “The Great Wave off the Coast of Kanagawa” 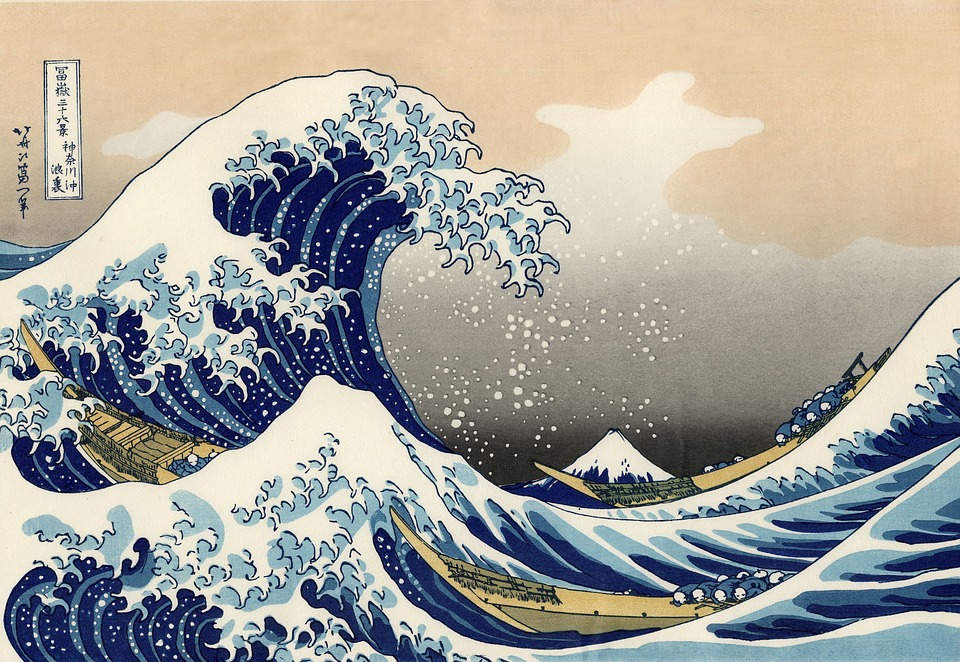 Hokusai was a Japanese artist of Ukiyo-e style. He has been very famous for over three centuries and it seems impossible to talk about Japanese art without referring to some of his works. The most famous of his works is “Great Wave off the Coast of Kanagawa”, this print is from Hokusai’s series of 36 views of Mountain Fuji. It is the most recognized Japanese art piece all over the world. It illustrates a stupendous wave threatening boats off the coast of Kanagawa. Among other features in the background, there is also the image of the renowned Mountain Fuji. This famous work of Hokusai can be found in Tokyo National Museum. It is admired and appreciated by many people due to its uniqueness since its creation in c.1831. The French composer Claude Debussy had this print hanged on his wall. It is said that the print was identified as one of his inspirations for the composition of the song La mer. I  recommend everyone in Tokyo to visit Tokyo National Museum to see this and many other works from the museum’s collection. 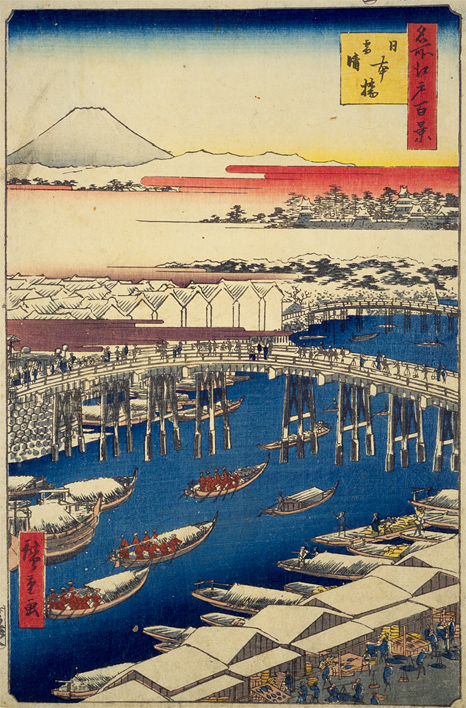 Utagawa Hiroshige (1797–1858) was also known as Ando Hiroshige, one of his prominent works still well known today is the “Clear Weather After Snow at Nihonbashi Bridge”, This is a print from his series of three views of famous places in Edo. (Edo eisho mittsu no nagame) Clear Weather After Snow at Nihonbashi Bridge known in Japanese as 日本橋雪晴 (nihonbashi yuki bare). It depicts a snowy scene at Nihonbashi Bridge (日本橋) in the ancient city of Edo, today is known as Tokyo. The features in the background include Mount Fuji on the left extreme, a public square, and a market, with people selling seafood and other products. There are some people crossing from one end to the other on the Nihonbashi bridge, fishermen are also seen in the river in several boats. 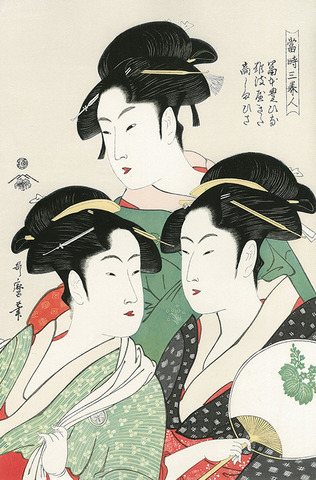 Utamaro was a renowned Ukiyo-e artist of c. 1753– 1806. One of his prominent works still admired today is the “Three beauties of the present day” (当時三美人 Tōji San Bijin) a woodblock print.The title of this print is sometimes referred to as “Three Beauties of the Kansei Era” (寛政三美人 Kansei San Bijin) or “Three Famous Beauties” (高名三美人 Kōmei San Bijin). The trio character print illustrates the profiles of three celebrity beauties of the time; geisha Tomimoto Toyohina, and teahouse waitresses Naniwaya Kita and Takashima Hisa.

Suzuki Harunobu, “Young Lovers Walking Together under an Umbrella in a Snow Storm” 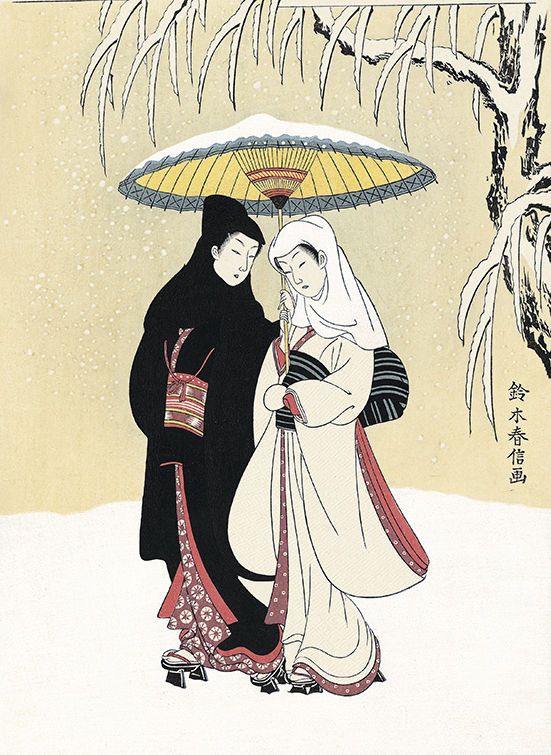 Suzuki Harunobu was a Japanese Ukiyo-e style artist c. 1725- 1770. One of his famous work still renowned today is “Young Lovers walking together under an Umbrella in a Snow Storm”(雪中相合傘  sechu ai aigasa). It illustrates two lovers under an umbrella, on the right is a branch of a tree that appears just a bit but evidently covered with snow just like the entire background.

Besides being able to see Japanese paintings and prints in Japanese museums there are many reprinted copies of these works I have discussed here and could be seen in Museums across the world in several cities in America, Europe and so on. If you are in Japan I recommend you to try the Japan Ukiyo-e Museum in Matsumoto Nagano Prefecture. Address: The Japan Ukiyo-e Museum: 2206-1, Shimadachi, Matsumoto, 390-0852, JAPAN. Open: 10:00 a.m.—5:00 p.m. Closed on Monday.

I hope you have a wonderful time seeing wonderful images from history.