Architecture in Tokyo: The Most Awe-Inspiring Buildings | Guidable

Architecture in Tokyo: The Most Awe-Inspiring Buildings

Tokyo is a hub for modern and contemporary architecture. The rich history of Japan influences the design, while innovation and technology allow for architects to push the boundaries of what is possible. Throughout Tokyo you can find some of the most remarkable feats of architecture in the world. Keep reading to find out more about the history of Tokyo’s architecture and learn about some of Asia’s most iconic buildings .

In the last 100 years Tokyo has been tragically devastated on two separate occasions. First, in 1923, the Great Kantō Earthquake left the city in ruins. The magnitude 7.9 earthquake and the subsequent fires caused by the earthquake destroyed much of city. In the aftermath of the earthquake, the mayor at the time, Gotō Shinpei, looked at the destruction as an opportunity to transform the city. New plans for the city were constructed and modern, more structurally sound buildings were erected.

Less than a quarter-century later, Tokyo was once again decimated. This time by the firebombing in World War II. With the city in ruins, and millions homeless, Tokyo showed its resiliency. The city would rapidly rise from the ashes to form a modern metropolis. With a highly advanced rail system, large spaces for public parks, and rapidly emerging skyscrapers, from ruins ravaged by war, Tokyo has become one of the most impressive cities in the World.

With a brief history of modern Tokyo in mind, we can now explore some of its most famous buildings.

One of the most iconic and most easily viewable buildings in Tokyo, isn’t actually a building. It’s a tower, the Tokyo Tower to be exact. It was designed by architect and professor, Tachū Naitō. Built in 1958, the tower was constructed to serve as a broadcasting antenna for the entire Kantō region. Additionally, it served as a monument demonstrating Japan’s status as a global leader. This was especially important at the time as Japan was looking to reassert themselves after their postwar reconstruction. 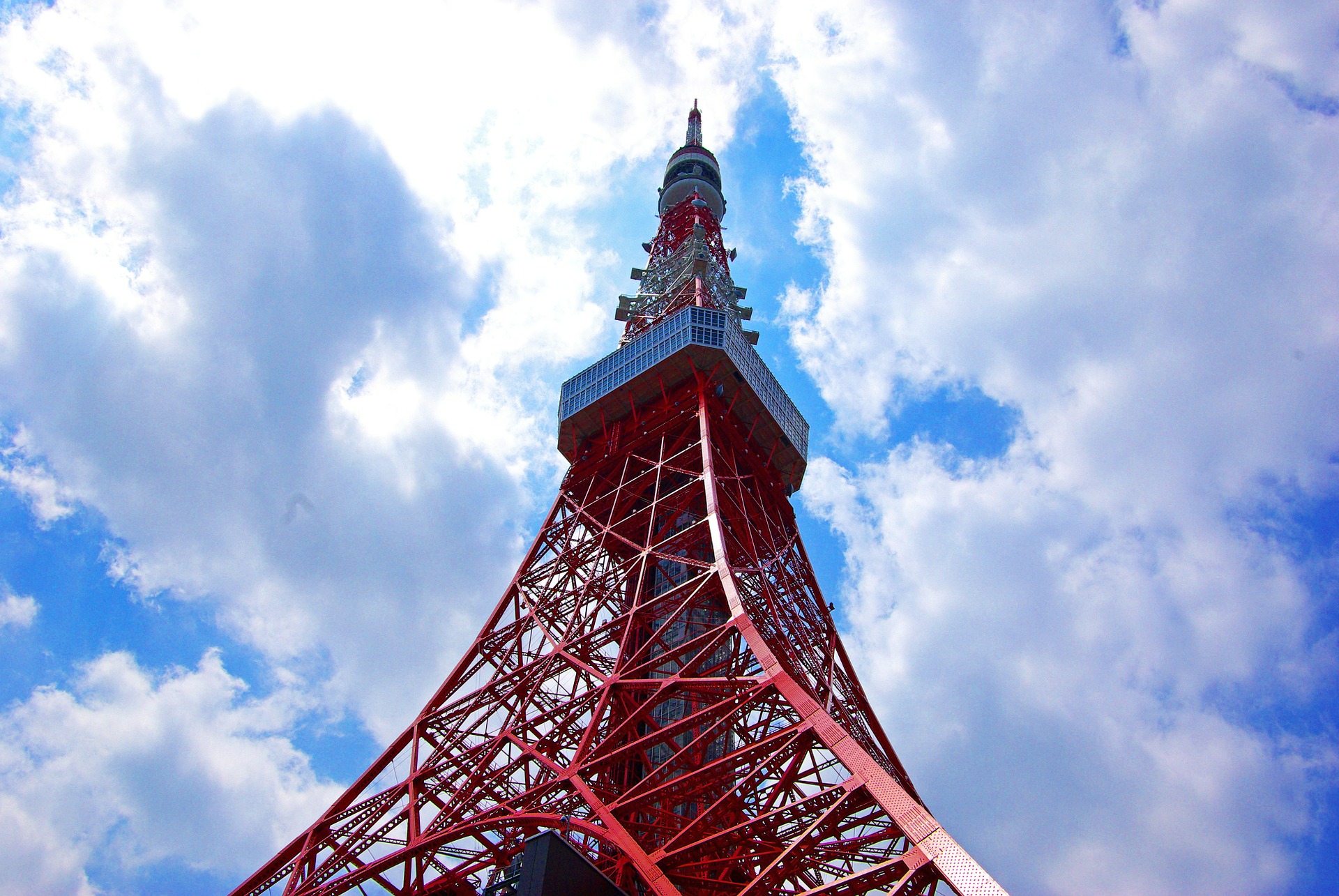 At 333m meters tall, the Tokyo Tower was the tallest freestanding tower in the world at the time of its completion, succeeding the Eiffel Tower by 9m. For 9 years it held onto the title. Entirely made of steel (a third of which came from damaged US tanks), the tower weighs 4,000 tons. The tower is painted in iconic orange and white segments. Every 9 years the tower is repainted and requires over 28,000 litres of paint.

In 1989, the tower received a lighting overhaul by designer Motoko Ishii. Prior to her work, the tower was lit by lightbulbs attached to the tower’s contours. Her design removed this attached lighting and instead choose to illuminate the tower with over 100 surrounding floodlights. Now from dusk to dawn the tower is fully illuminated, standing as a triumphant monument in the Tokyo night.

Today, the Tokyo Tower stands as an iconic landmark of Tokyo. It is often portrayed in media and culture to signify Tokyo. The tower even has its own mascots and emoji. Up until 2010 it stood as the tallest structure in Japan until it was upended by the Tokyo Skytree. 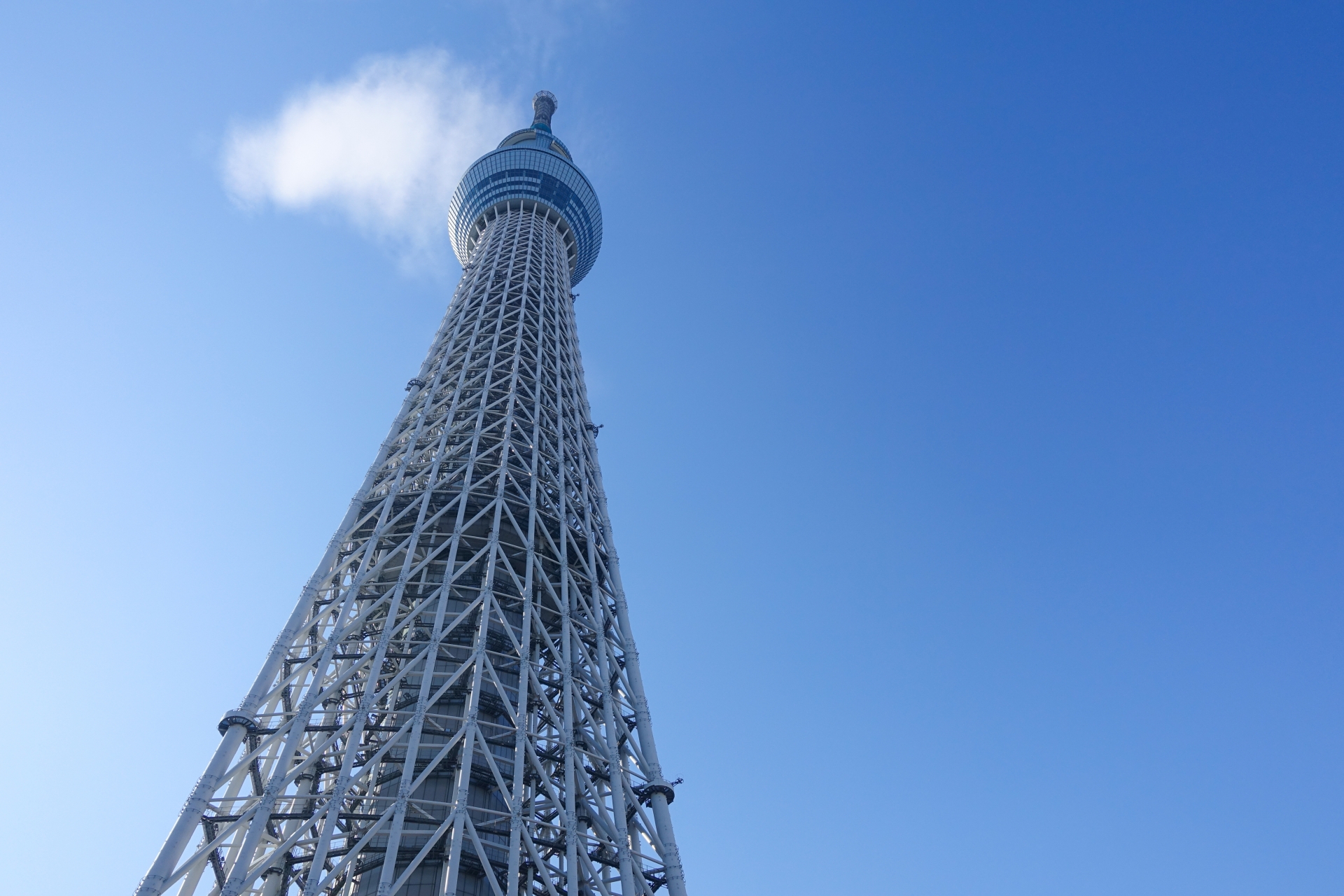 Built in 2010, the Tokyo Skytree is an iconic symbol of Tokyo in the 21stcentury. At 634m tall it is the tallest structure in Japan and the 2nd tallest in the world. Its primary function is as a broadcasting tower, but it is also very popular for its observation decks, it’s sky-high restaurants and it’s mall in the lower floors. The circular design of the tower allows for panoramic views of Tokyo.

While the tower’s design is neo-futurististic, it also pays homage to traditional Japanese design. The form is meant to mimic a 5-story pagoda. Much consideration was put into the stability of its design and it has several precautions made to make it really resistant to earthquakes.

The Skytree and surrounding neighborhood have become a popular tourist destination. At the base of the Skytree is a shopping complex and aquarium. In its first year, the Skytree gathered over 50 million visitors. It is expecting a surge of new visitors in the upcoming year as the Olympics draws near.

One of the most impressive features of the Skytree is the LED lights that illuminate it at night. Alternating days, the lights either shine blue or purple. These lights can be seen throughout the city shining bright upon the new landmark of the Tokyo night. 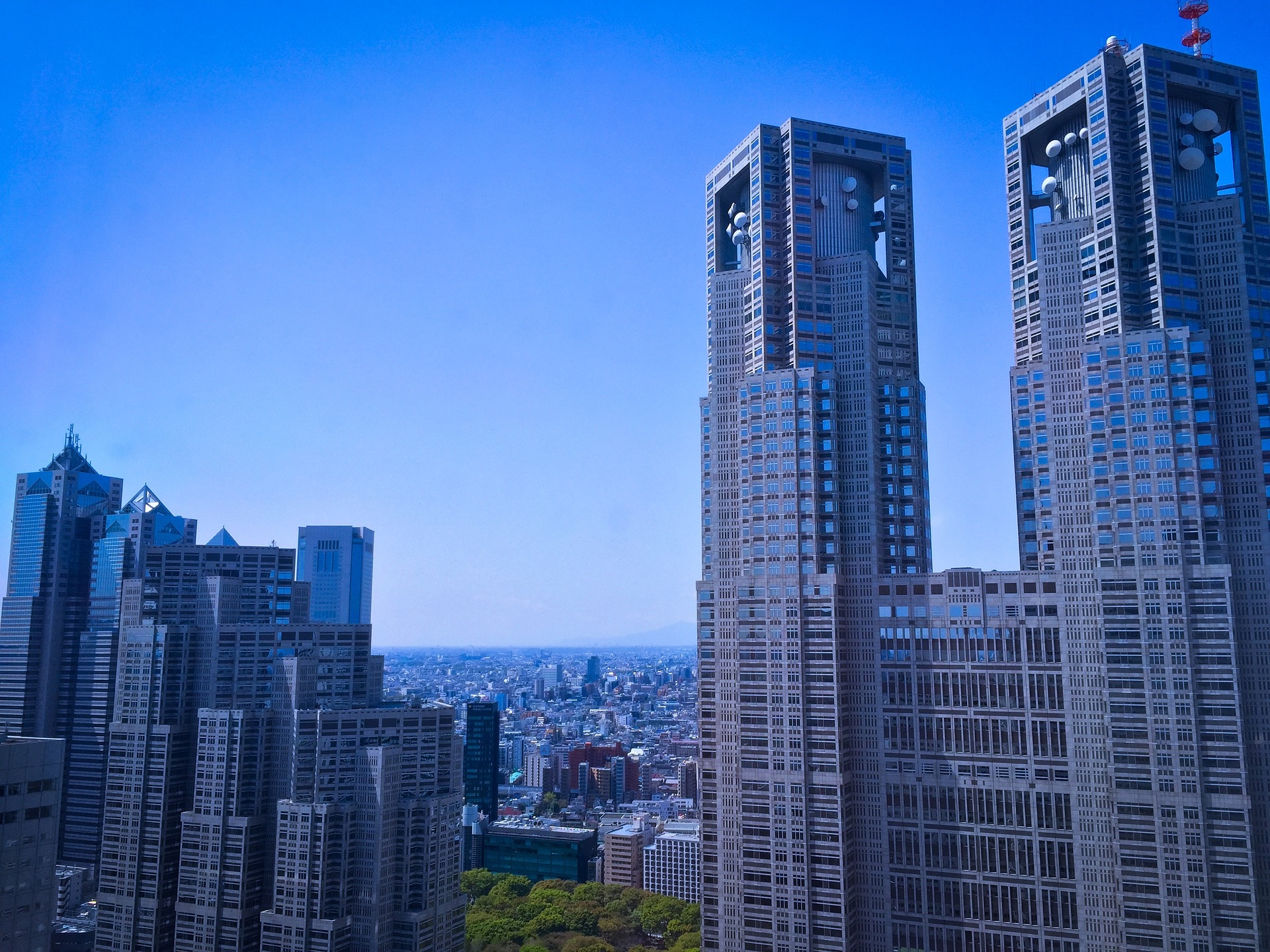 For more great city views make sure to check out the Tokyo Metropolitan Government Building. Designed by iconic Japanese architect, Kenzo Tange, the building is his post-modern interpretation of the Notre Dame Cathedral. The building is also meant to look like a computer chip, referencing Tokyo’s technological prowess.

One of the best parts of the building is its observation deck on the 45thfloor. Unlike many observation decks, visiting this one is free! There is also a café and gift shop available. If you are in Shinjuku, make sure to take the time to stop by.

Another must see architectural feat is the National Museum of Western Art. It was designed by the famous Swiss/French architect, Le Corbusier. It is the only building of his in East Asia. The museum, which was completed in 1959, serves as a symbol of the relationship between France and Japan.

The museum is an example of Le Corbusier’s modern style. The concrete building is very geometric in form. The main galleries of the museum sit upon large concrete columns. The design of the building implements Le Corbusier’s modular system. This system takes into account the human body and designs architectural proportions to fit a human scale.

Inside the museum you will find many renowned works of art from the western world. Coming up this year, the museum will begin receiving loans of paintings from the National Gallery in London. Among this collection is Vincent van Gogh’s famous Sunflower series. This will mark the works first time in Japan.

In Ginza you can find Kisho Kurokawa’s Nagakin Capsule Tower. This building, with its modular pods is a prime example of the Japanese architectural movement called Metabolism. Metabolism took inspiration from organic biology and applied it towards large scale architecture. In the Capsule Tower 140 modular pods are stacked together to form this unique building.

Each pod was meant to serve as a small individual apartment for Japanese bachelors. The dimensions of the pods are 2.5m x 4m. With such a tiny space for living, the Capsule Tower is now seen as a failed development.

Since its construction in 1972 the Nagakin Capsule Tower has faced much scrutiny. In 2011 due to deteriorating conditions, tenants voted to have the building demolished. However, due to the architectural significance of the building, the decision was to preserve it . Over half of the units now lack permanent tenants and are used for business or as storage space.

Tours of the building are available if you would like to see the interior. Over the 45-minute guided tour you will learn about the history of the building and be given a chance to step into a capsule that is preserved to appear as it did in the 70’s.

While in Ginza, go pay a visit to Mikimoto’s Ginza Hoten. This building houses the Japanese pearl cultivator Mikimoto’s headquarters. The building is best known for its unique façade. The concrete exterior has irregular placement of organic windows. This form strongly contrasts the uniform geometry of the surrounding buildings. Definitely worth a visit if you are in Ginza.

Some of Tokyo’s greatest architectural achievements are the many temples and other religious establishments throughout the city. Visiting these spots are great as you get to enrich yourself in the various religious cultures within Tokyo while also getting to appreciate some of the city’s finest architecture. 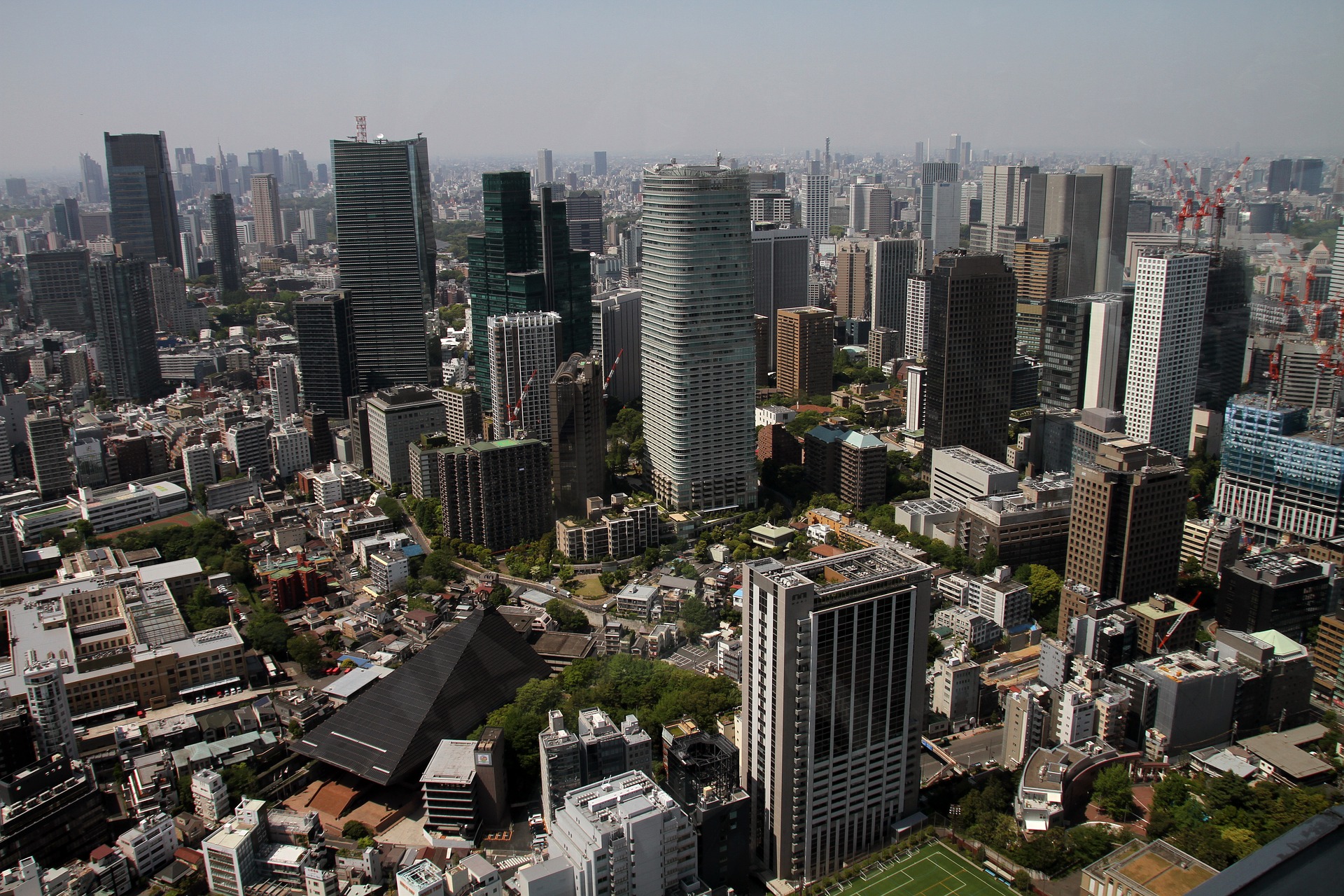 One of my favorite building in Tokyo is the Reiyukai Shakaden Temple. The temple looks like something between an ancient Aztec temple and a spaceship. It was constructed in 1975 and designed by Reiyukai Shakaden. Of all the interesting design elements of the temple, the most unique is the giant reservoir holding over 400 tons of water.

While the architecture of the temple may be intimidating, don’t be afraid to enter the temple. The monks inside are very friendly and welcoming. The temple even offers free Japanese lessons.

Famed architect Kenzō Tange has left an undoubtable mark on the architecture of Tokyo. As mentioned before, he designed the Tokyo Metropolitan Government Building. Another one of his crowning achievements in Tokyo is the Yoyogi National Gymnasium.

The gymnasium was built in preparation for the 1964 Tokyo Olympics. Made up of steel and concrete, the design takes inspiration from the west and reinterprets it towards a distinctively Japanese style. The design won Tange the prestigious Prtizker Architecture Prize.

A personal favourite of mine among Tange’s works in Tokyo is the St. Mary’s Cathedral. The building is Tange’s modern interpretation of what a cathedral could be. The temple is built up of 8 concrete walls spaced apart so light can enter through the large windows. As the day goes by, the light inside the cathedral is constantly changing, creating a beautifully dynamic element. One of my favorite features is the contrast between the exterior and interior of the building. The exterior is a bright polished metal while the interior is darker and features concrete. The form of the building is meant to imitate the lightness of a bird. 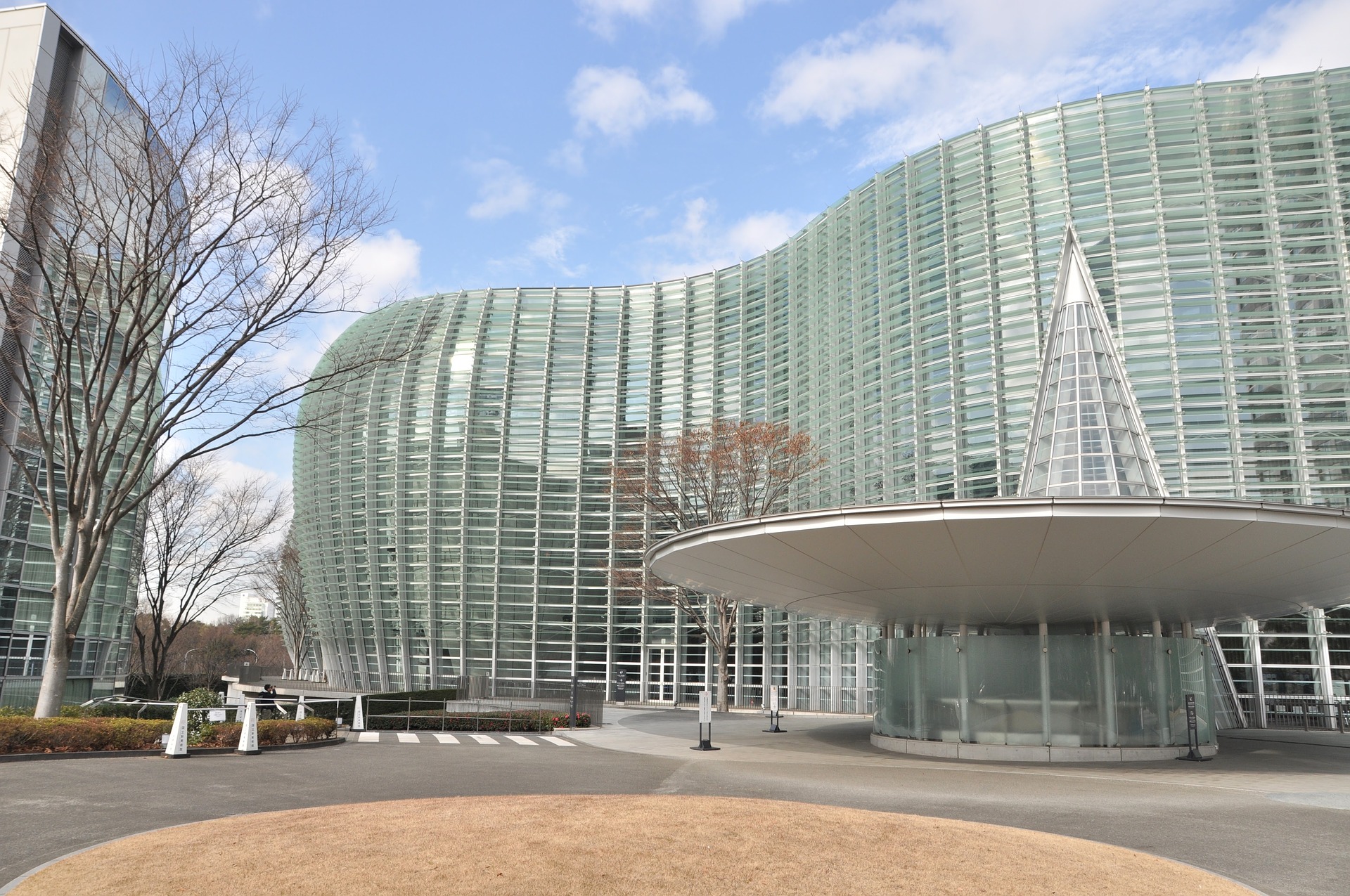 Another one of Japan’s most famous architects is Kengo Kuma. Many of Kuma’s most accomplished works can be found in Tokyo. One of his most famous is the Asakusa Culture and Tourism Center. This building is most recognizable by its unique form. Each one of its 7 stories have a different shaped roof. This results in an interesting appearance unlike any of its surrounding buildings. Also, its unique structure makes each floor you visit posses a unique and new feeling. The spaces created between the roofs and the next floors are used as storage, making the unique style also highly functional.

Sunny Hills in Tokyo is another popular design of Kuma’s. It can be best recognized by the crossing wooden supports that make up its structure. This support system is called Jigokugumi and is a part of traditional Japanese architecture. The use of wood is a consistent element within most of Kuma’s designs. The intricate design and use of natural material make Sunny Hills stand out amongst the mostly concrete and metal buildings in Tokyo.

Kuma’s most recent project is the New National Stadium which will be finished in November of 2019. This stadium will serve as the venue for the opening and closing ceremonies of the 2020 Summer Olympics. With a 153 billion yen budget this will be Kuma’s grandest project to date.

While this list highlights some of the top buildings and feats of architecture in Tokyo, it only scratches the surface of what Tokyo has to offer. Throughout the city, everywhere you go you can find a building that is interesting and impressive.

My best recommendation to explore the architecture of Tokyo is to allow yourself time to just walk around and explore the city. Keep your head up and marvel at the buildings built around you. Tokyo’s stunning modern architecture provides a glimpse into the future.

Now that you know a little more about the architecture of Tokyo, do you have a building you are most excited to see? Did you already have a favorite building in Tokyo? Let us know in the comments below!