EDO WAVE is a music festival that exceeds genre, country, and all expectations! The one-day festival is a gathering of artists from different genres, playing over two stages. It’s the start of a new wave of music and culture in Japan, ready to take the world by storm.

Not only will a multitude of Japanese bands and DJs perform, but performances of International bands will also show on the stage’s big screen! During times of lockdown and travel restrictions, it’s difficult for overseas artists to play in Japan. But that doesn’t mean we cannot connect internationally! With the big screen, it will seem just like a live performance, enjoyed from the other side of the globe!

The Idea Behind The Music Festival

Would you like to witness the start of something new? The organizers believe that this festival, the connection of artists all over the world, will create a new wave, a new culture/mindset! Organizer KEN from Vaiwatt, was inspired by the Edo period, a peaceful time in Japan’s history where new culture grew and flourished and a cultural wave was created. These creations from the Edo period such as Ukiyo-E (浮世絵),  Kabuki (歌舞伎）Yokai(妖怪), Sumo Wrestling (相撲), and even Sushi (寿司) are still prevalent in Japanese culture today. KEN builds on this idea for the EDO WAVE festival. The festival is a marriage of Japanese culture and a “free-spirit” atmosphere, felt when Vaiwatt played a show in Russia and were inspired to make a similar festival in Japan with artists from all over the world. 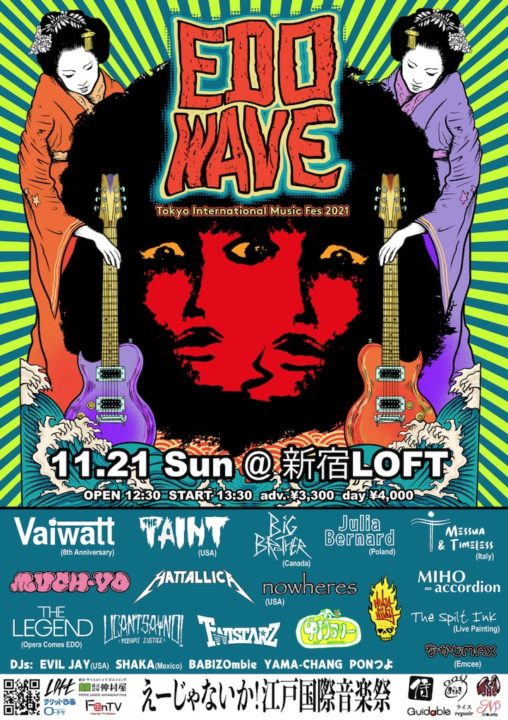 You can order tickets from Lawson Ticket or Ticket Pia web services. You can buy the tickets online or from the handy multi-functional machine in the Convenience Store (Lawson for Lawson Ticket and Seven Eleven or Family Mart for Ticket Pia). Choose to pay online or at the conbini, and you can even pick the tickets up at the said conbini or choose to have them delivered.

Have you ever been to a festival in Japan before? Often they have two (or more) stages where the artists play in alternation, allowing you to move between stages after each act.

Check out the EDO WAVE timetable to see who is playing and when!

Vaiwatt are considered “The Extremely Unpredictable Digital Chaos Duo”. Their music breaks all barriers between genres and can go between punk and “hallelujah pop” in an instant. They will celebrate their 8th anniversary on the day of EDO Wave!

These rock ladies mix a heavy grunge sound with dual anime-like vocals. Their lyrics are addicting and their skills are awe-inspiring.

A Metallica tribute band, in fact HATTALLICA are the only tribute band in Asia to be officially recognized by Metallica. After touring in the UK and playing at Japanese festival SUMMERSONIC, they’ve become very popular!

A new type of J-Rock band who put all their energy into their live performances. Their name “TWISTARZ” is a coined word meaning “tornado / shining star”.

80s style hardcore, skate trash band U CAN’T SAY NO! use a horn in their music, making them stand out with their unusual new sound.

A solo act with a guitar who performs over 100 shows a year all over Japan! Her impressive voice stuns every crowd and she is popular with both guys and gals.

A Reggae based Junk Rock Band.

NEW WAVE – DUO from America! If you are fans of “The Cure” and “New Order” you’ll definitely love them!

MIHO plays hard rock and Eastern European gypsy music mixed with the sounds of an accordion!

An opera unit that performs UK ROCK through opera singing.

These performers will join from overseas, shown on the Shinjuku LOFT big screen!

Julia sings Showa-Kayo and made her first appearance on Japanese TV show “Nodojiman The! World”. She hopes to “carry out activities that will serve as a bridge between Japan and Poland through images and songs.”

The Taint from USA

A Hard rock punk trio with a unique sound from Southern California who originally formed as a Misfits cover band.

A DIY Ska Punk band Toronto, Canada with a fast paced social/political punk sound. This will be their second show in Japan.

This Venice born rockband has the dream of making music that has no limits of age, sex or race, timeless music for everybody.

These DJs will be spinning the decks!

A DJ artist who spins in all genres, but mainly rock music!

Originally from Raleigh, NC Evil Jay has been a resident in Japan since 2003, and performs often in Tokyo.

A DJ from Mexico who loves gangsta rap.

This zombie DJ from Nakano specialises in Industrial Industrial, EBM and more.

Johnny or “The Spilt Ink” currently lives in Tokyo where he works on commissioned art in his studio or paints live at nightclubs.

How to Get There

The festival will be held at the live house Shinjuku LOFT, located in Kabukicho, Shinjuku.

To get there use Shinjuku’s East Exit and make your way to the Kabukicho and TOHO CINEMA SHINJUKU. Shinjuku LOFT is in the basement of the TATEHANA building.

Shinjuku LOFT and the EDO WAVE organizers have put in place several measures against the spread of COVID-19. These measure include social distancing, body temperature checks on arrival, a strict mask wearing policy, and the ventilation of the room at several points during the festival. You can find more information here.

If you are ready to witness a new type of music festival and culture take the world by storm, you can’t miss it! The tickets are on sale now, and the countdown to 21st November begins!