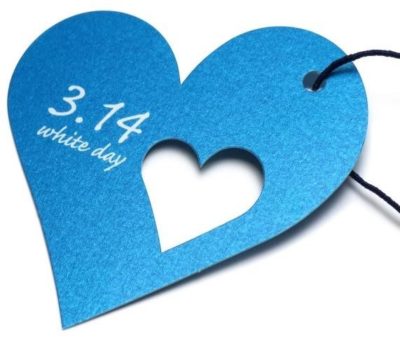 In Japan, we have an annual event called “White Day” on March 14th – just one month after Saint Valentine’s Day. ( February 14th). In Western countries such as the U.S., this day is called Cookie Day, Flower Day, Marshmallow Day and so on. Why do Japanese people call the day “White Day” unlike the Western do? In fact, we have so many origins that we cannot really tell which one is correct. However, there are some examples as follows:

– “White” comes from the color of sugar, which is used as one of the ingredients for candy.

– In 1978, the national confectionery association decided the day to be called “White Day” for candy promotion and distribution like chocolate ones on Valentine’s Day.

Even though we are not sure which origin is genuine, the day definetly exists in the Japanese calendar. On the day, those who got presents from females including co-workers, friends, relatives or their lovers on Valentine’s Day, need to give them some gifts in return!

Shops, Items, Cost and Notices for the “White Day”

Surprisingly, we can buy some presents or memento for the day from department stores or supermarkets around mid-February, throughout the day (until stores and shops close). We even can purchase them at convenience stores such as Seven-Eleven and tenant-like event shops around stations.

Including typical presents like cookies or marshmallow, other kinds of gifts are also popular such as cosmetic products, small postcards or flowers. If the exchange of the gifts is done between lovers, I hear that men sometimes give luxury underwear as a gift in return, to their girlfriends!

As we may already know, some gifts have different meanings : 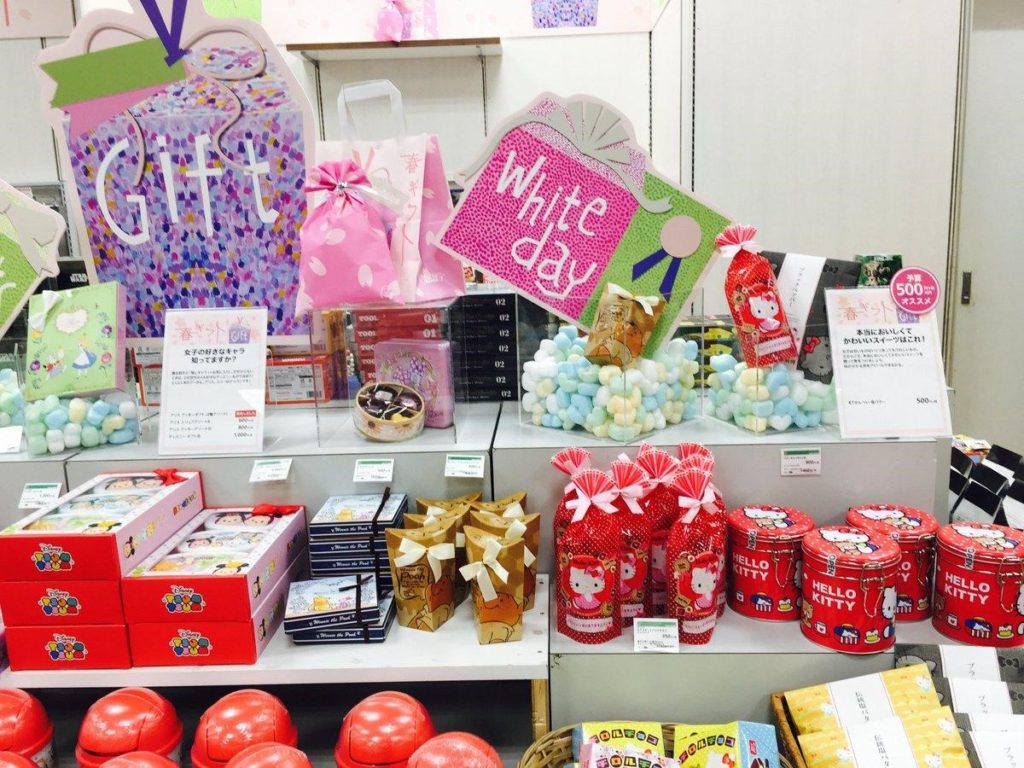 Regarding the cost, it’s said that men are likely to pay double or triple the price for gifts on that day. As far as we can see, the reasons why men in Japan do so on that day is their pride, social status, and peer pressure, which don’t allow them to pay less or look for cheaper stuff. Therefore, men sometimes go through disadvantages spending more money than women on Valentine’s Day.

In Japan, unlike between the Western couples, women give some gifts not only to their lovers or someone special but also their male friends and relatives. Thus, even men understand some of the gifts are obligatory or only to keep social relationship with women, that’s why they should give-away some presents as well. If gifts are for a social relationship, we also consider that the present should not be very expensive or not very cheap. As for the postcards or message cards, we need to write a friendly and simple ( not passionate) words for women who gave some presents on Feb.14th in order to keep the relationship between them.

Men’s Opinion about the “White Day”

If a man has a girlfriend and he gets something from her on the Valentine’s Day, he is full of happiness or excitement on the “White Day”; on the other hand, most of the men who get “social relationship presents” are a little terrified on the White day, since they lose some money and time on the obligatory gifts. I have an elder brother, who is always complaining about the event whenever the day comes because he says that he loses his money and time. Even though men have to make some sacrifices on the White day, they feel very sad when they do not get any “offerings” from ladies on the Valentine’s Day! Consequently, it seems that men also expect to get some obligatory gifts from females.

When we see this event, we may notice how unique this day is. Sometimes, Japanese come up with the idea, which is distinctive, such as Yama-no-hi (the day is a national holiday around the 2nd Saturday in August. The Japanese government designated the day in 2015/6 since there has been no holiday in August).

In addition, Japanese put emphasis on “obligation”. Even if women just give some presents to men for the social relationship, men reluctantly pay for the return gift for Valentine’s Day. This is because Japanese people cherish showing their gratitude instead of showing their true feelings towards the day or the gift they get on the Valentine’s Day. Even if the event is not traditional ‘Japanese-culture like’, the root definitely includes Japanese culture.

If you have an opportunity to experience “White day”, you will probably notice some parts of the Japanese culture.

My profile: Besides English, I have studied Japan and it’s culture to tell international visitors about “Real Japan” and to pass the tour guide test.