Get to Know Japanese Calligraphy | Guidable

Get to Know Japanese Calligraphy

By writing letters on paper using a brush and ink, experimenting with characters, style, and form, calligraphy is not only “writing” but becomes a means for self-expression and is fully considered an art form.

Japanese calligraphy is called shodo, and it’s written with two characters: one meaning “writing” (書) and the second meaning “way” (道), i.e., “the way of writing.”

A Brief History of Japanese Calligraphy

With the arrival of Buddhism in the Asuka (538-710 AD) and Nara periods (710-794 AD), many people began to practice sutra (aka Buddhist scriptures) copying, a practice known as shakyo (写経), which literally translates to “transcribing.”

Even today, transcribing sutras is still used by both men and women of all ages as a way to calm the mind and concentrate, even though the original purpose was to help spread the sutras introduced from China.

Therefore, there is no doubt that it is most likely only thanks to the introduction of Buddhism from China that calligraphy began and spread within Japan as well.

The Introduction of Kana

Japanese calligraphy today, in fact, can be broadly divided into two categories: kanji (Chinese characters) and kana (Japanese characters), but it is not uncommon to see both kanji and kana mixed in the same composition.

Of all the Buddhist schools, calligraphy has a close relation, in particular with Zen Buddhism. Zen sees the activity of copying and writing down characters with precision and commitment as a form of meditation to the extent that there is a specific term, hitsuzendō (筆禅道), that describes the practice of zen brush painting. 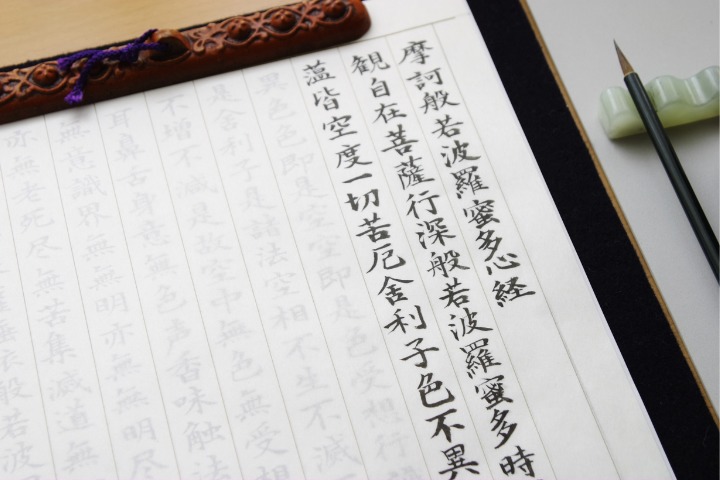 There are three main styles of Japanese calligraphy:

Kaisho was perfected during the Three Kingdoms period (220-280 AD) in China and reached its golden age during the Tang dynasty (618 to 907 AD). It has been the official writing style for the longest because of its clear, well-rounded, and easy-to-learn brush strokes. The fact that kaisho has been used as a standard typeface for 1,800 years shows how sophisticated but easy to use and understand it is.

Each stroke is carefully written, and all of them are separate from each other. This is the standard style and the starting point for all the other writing styles—one must master kaisho before moving to the other, more complex and “subjective” styles of calligraphy.

Gyosho seems to be an abbreviated form of kaisho, but it is actually older than kaisho and was derived from the clerical script during the later Han dynasty (25–220 AD). It has the advantage of being written like a single stroke yet is still easy to read.

Using small dotted strokes, which are clearly defined and separated like those seen with kaisho, gyosho can also be connected using a fluid stroke, so this leaves more creative space for the calligrapher to express their own individuality and style.

Gyosho is the style often found on signboards and on noren, the typical short curtains hung at shop or restaurant entrances you see very often in Japan.

The sosho-style cursive script was developed during the Qian-Han (202 BC–9 AD) and later Han periods). The most striking characteristic is that the dots are largely omitted, and preference is given to the fluidity of strokes than to the rigid structure of lines and dots. 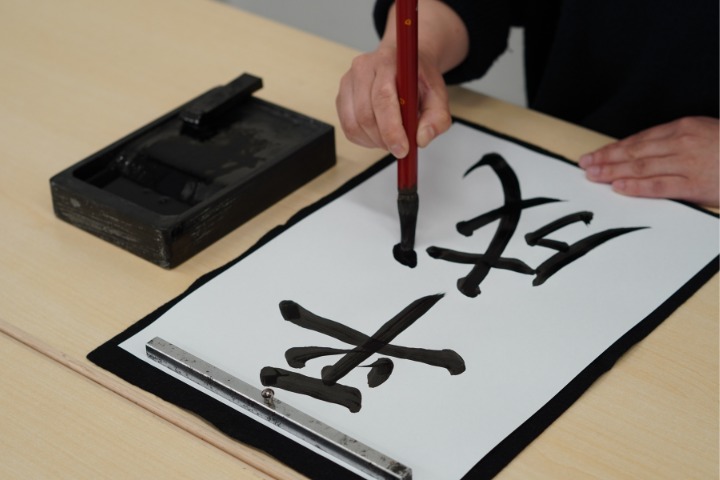 What You Need for Japanese Calligraphy

Have a Hand at Japanese Calligraphy

Starting shodo from scratch does not have to be expensive in terms of materials and equipment needed, but it is quite vital to follow lessons and have the guidance of a calligrapher to grasp the basics, such as how to hold the brush and the different types of strokes and lines.

Now you have an idea of how Japanese calligraphy was born and came to be the art form it is today, as well as the close relationship between the Japanese writing system and the Chinese one.