From the iconic torii gates off the shore of Miyajima island to the towering stone torii that guards the entrance to Tokyo’s famous Meiji Jingu shrine, torii are a well-known symbol of Japan’s historical and architectural tradition. In recent years, however, temples and shrines around Japan have begun taking the simplistic design of torii even further and creating beautiful gates that bring a whole new dimension to Japan’s religious architectural design.

Traditionally, Japan’s temple and shrine gates were made using stone or wood (which was traditionally left bare or painted red). However, with the growing exposure to outside influences and a greater demand for creativity, some temples have begun experimenting with various colours and materials. Discover some of Japan’s most unique and interesting torii designs! 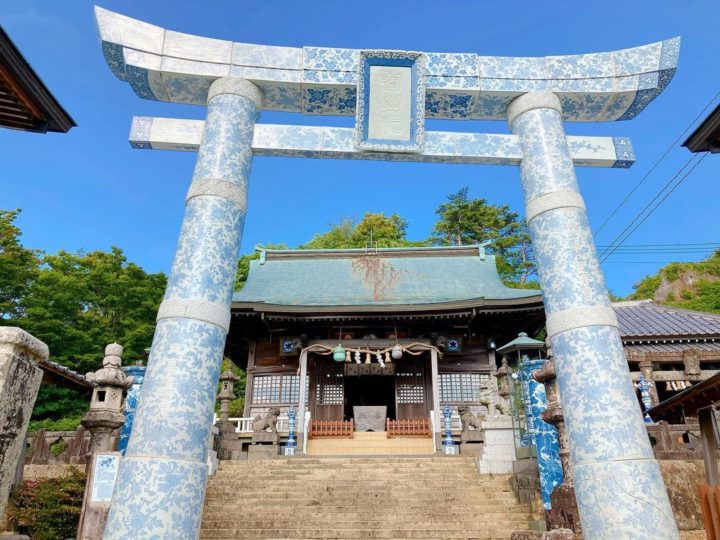 Sueyama Shrine (also known as Tozan Shrine) was built in 1658 and dedicated to Emperor Ojin, Nabeshima Naoshige (a 15th-century warlord) and Yi Sam-pyeong, who is considered to be the father of the world-famous Arita ware porcelain.

The unique torii at Sueyama Shrine was built in 1917 to commemorate Yi Sam-pyeong, and so was fittingly decorated using porcelain, creating a beautifully unique blue and white torii that is protected by two porcelain guard dogs that stand watch at the entrance to the shrine.

Stand under the porcelain shrine and look out over Arita town before heading down to check out some handmade Arita porcelain at the nearby Arita Ceramic Musem or the Baroque-style Arita Porcelain Park. 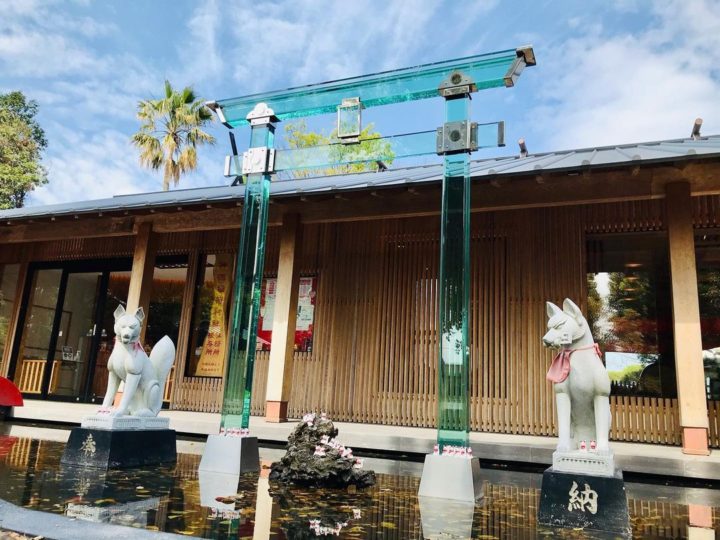 Known for its modern style, Jintoku Inari Shrine in Kagoshima has begun gaining popularity for its glass torii gates. With one placed in front of its rather contemporary main hall and another in front of a path of traditional red wooden torii, the two glass structures stand as a symbol of Japan’s changing religious architecture.

If you appreciate the twisting aesthetic of Fushimi Inari’s endless red torii, why not take a walk through the torii path at Jintoku Inari Shrine, where you can enjoy similar surroundings without the crowds?

If you’ve ever visited Kyoto’s Fushimi Inari Shrine and walked through the impressive trail of red torii, you have probably felt the remarkable sense of being surrounded by a forest of red. While Saidoji temple’s trail of torii gates is nowhere near as long as the trail at Fushimi Inari Shrine, it’s unique in the fact that every one of its one hundred gates are white.

Visit during June to enjoy the flowering hydrangea flowering along the trail as you walk through the path of white torii before stopping off at the nearby Ifurai Museum, where you can learn all about Jomon-era pottery and witness the making of several pieces first-hand! 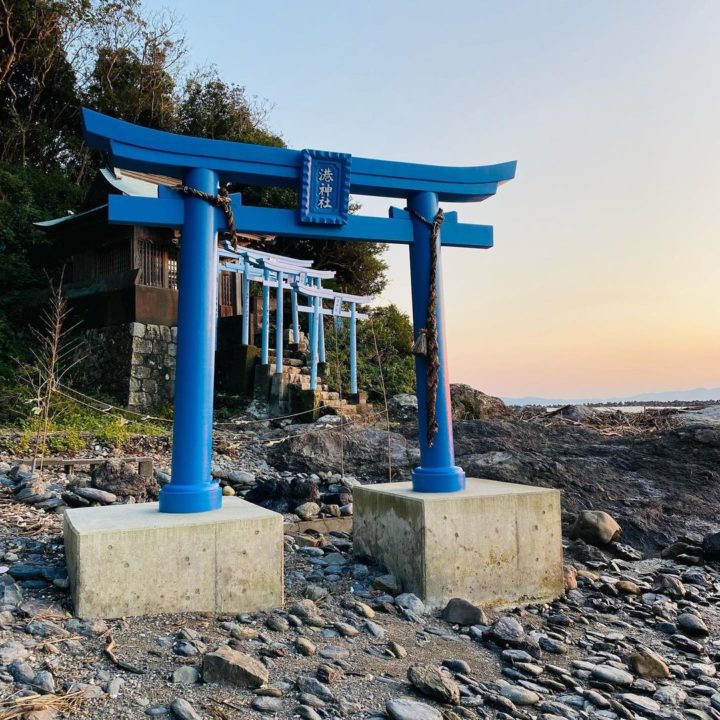 Located close to the edge of Nobeoka city’s expansive shoreline, Minato Shrine is a small shrine tucked away to the north of Miyazaki prefecture. While the shrine is relatively small and mostly unassuming, it’s home to a small set of bright blue torii gates that perfectly suit the coastal environment.

If you’re lucky enough to visit on a sunny day, you’ll be treated to the sight of the sun shining off the sea all right next to these bright blue torii gates! 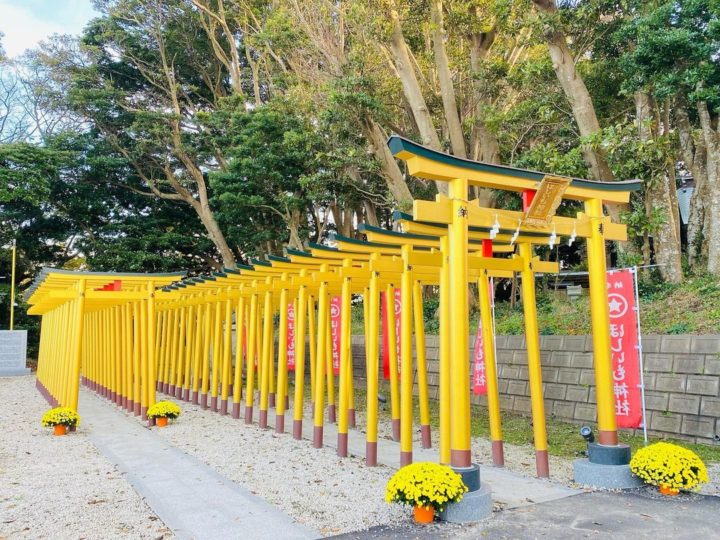 Literally named “dried sweet potato shrine”, Hoshiimo Shrine certainly stands out. Since it was renovated at the start of 2022, it’s been given a gleaming make-over and now features two rows of small gold torii that mark the entrance to the small shrine—a feature that has recently made it popular among influencers and photographers.

Enjoy taking a few photos under the gold-themed torii gates before making an offering at the small shrine. While you’re there, why not also checking out the affiliated Horide Shrine next door before trying some of their in-house dried sweet potatoes?

While Kanadorii gate itself may not get many points for individuality, its size and location might! Stood towering over a busy main road, Kanadorii gate is placed close to the foot of mount Fuji, which provides a beautiful backdrop to those who approach the gate from the front.

Originally built by worshippers of the mountain in 1788, for believers in Japanese folklore, the gate marks the border between earth and the spirit world that can be found at the base of Mount Fuji. Although this gate is not the original (it was rebuilt in 1957), it has become a symbol of Fujiyoshida city, attracting thousands of tourists every year who come to admire the close-up view of Mount Fuji.

Visit during the colder months to catch a glimpse of the iconic view of Mount Fuji covered in snow! 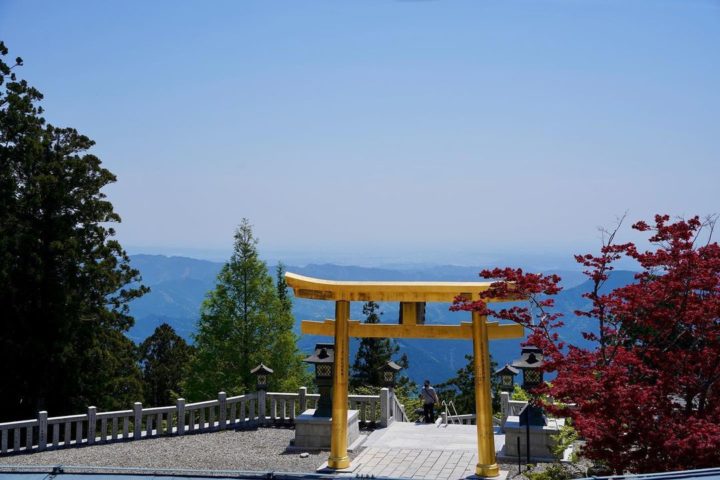 A 1,300-year-old shrine dedicated to the God of Fire, Akihasan Hongu Akiha Shrine is home to what is probably the most beautiful torii on this list. While the large, gold torii itself isn’t the most unique, its position at the edge of a mountain and the view it offers are.

On a cloudy day, Akihasan Hongu Shrine’s large gold torii gate looks out over a sea of clouds, and visitors can stand at what feels like the edge of the world.

And on a sunny day, you can stand at the top of the stairs leading to the shrine and look out over Hamamatsu city and, if you’re lucky, all the way out to the Pacific ocean.

Since the shrine is hidden deep in the mountains of Shizuoka, would-be visitors to this shrine must either go by car from the lower shrine that sits closer to the base of Mt. Akiha or brave the hike up the ancient walking path that stretches between both parts of the shrine.

If you are able to, it’s better to attempt the hike up the mountain, as the surrounding forest is full of ancient Japanese cypress and cedar—perfect for a spot of ‘forest bathing’.

Along with changing times and tastes, Japanese temples and shrines have begun adapting traditional symbols and designs in a fight to remain relevant in modern Japan, and torii are just one way these changes have manifested.

What do you think about Japan’s changing traditions? Leave a comment and let us know!