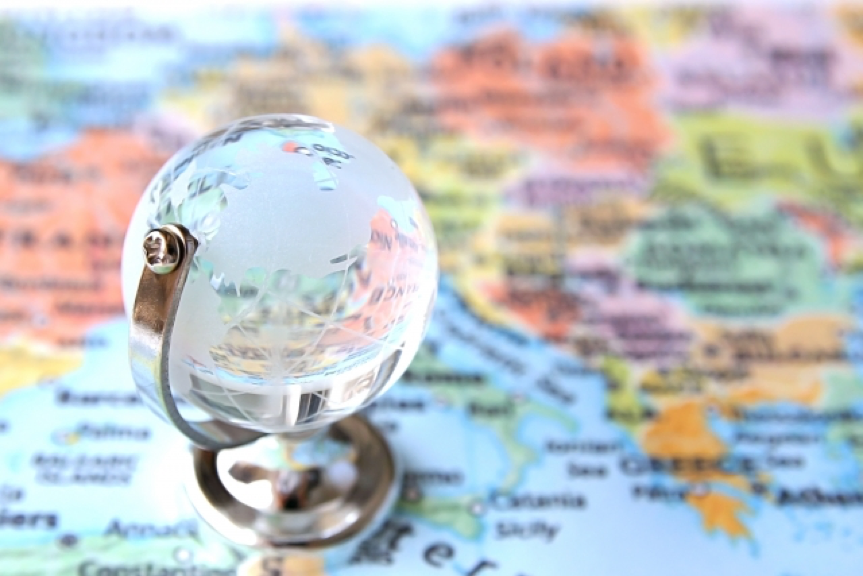 Studying abroad enriches your life.  It might be a cliché but it is true.  It offers you not only the opportunity to gain knowledge of the subject you are interested in but also the opportunity to see the world, to understand people and discover something you can only do by immersing yourself in the culture unique to that particular country.

Despite advancing globalization and an abundance of information in cyber space, Japan is still a magical place full of old traditions and customs attracting many visitors from all over the world.

What etiquette rules should I follow when studying in Japan?

Whether you are currently planning to study in Japan or have just arrived, you are probably feeling excited and overwhelmed at the same time.  Leaving home on your own to live and study in a country where the culture, language and traditions are very different and new to you may be a daunting prospect.  There are many rules and etiquette you might not be familiar with but don’t worry; most Japanese people don’t get it right either!  However, you might find the following tips useful.

There is no need to remember them.  Just keep this information somewhere in your memory.  If you forget or get it wrong, that’s ok; most of Japanese people get it wrong all the time.  As the day goes by, these things become second nature to you.

Be prepared to take your shoes off and put on a lot in Japan.  Entering certain buildings while wearing shoes is prohibited in many places such as private residence, ryokan (Japanese traditional hotel), temples and shrines.  Some restaurants and izakaya (pubs) still have rooms with tatami mats which you enter without shoes. 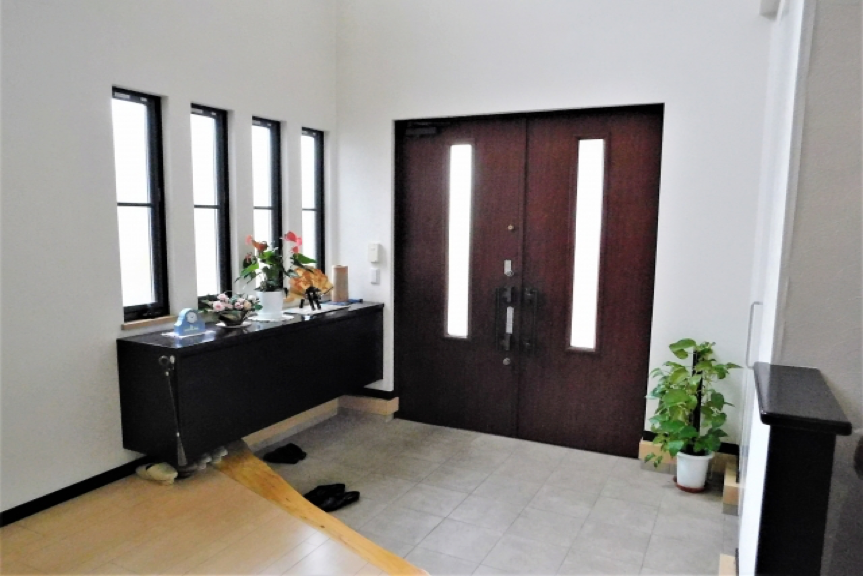 When you become friends with local people, they might invite you to their house or flat.  This is a great opportunity to witness how people live in this country.

As the front door opens, you’ll see a small recessed area covered with tiles or concrete.  This is called “tataki (たたき)”, and is where you take your shoes off before stepping onto a usually wooden or tiled area, which leads onto a corridor.  Once you have taken your shoes off, you can turn your shoes around so that the toes are facing the front door.  It’s not rude if you forget to do this is seen as good manners.  Your host may offer you a pair of slippers for you to use during your visit until you put your shoes back on.

It is not considered good manners to visit someone’s house in bare feet.  Especially if you are visiting someone who is senior to you, for example, your friend’s family or your teacher, make sure to wear socks or tights. In summer, if it is too hot to wear socks, you can take a spare pair to put on when you take your sandals or flip-flops off. 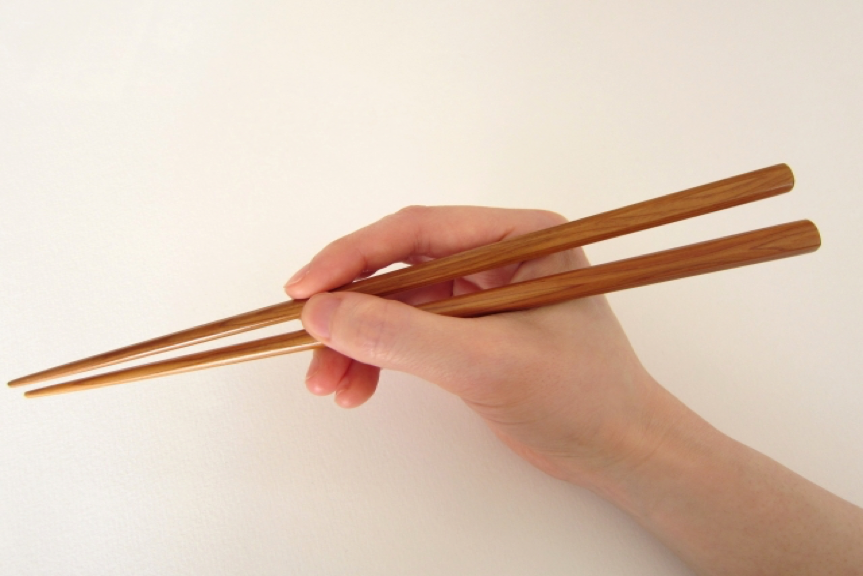 Avoiding chopsticks in Japan is not easy.  If you find yourself utterly useless with them, it is ok to ask for a fork or a spoon, however, since you are here to experience the Japanese way of living, why not give it a go and practice using them.  There are plenty of videos available on the Internet you can refer to, so pop down to your local “Hyaku-kin (hundred yen shop)”, pick up a pair of chopsticks (they have quite a range) and start practicing.  Even if you can’t quite get the hang of it and let a slice of slippery cucumber fly across the table, don’t panic, because we Japanese aren’t quite the masters of chopsticks as the rest of the world might see us.

Children in Japan start practicing using them very early – as early as 3 or 4 years old.  They learn how to hold them correctly but some develop their own unique way of holding them and this often stays with them even into their adulthood – most of us actually, including Prime Minister, Shinzo Abe.

Even when you have perfected the way you hold your chopsticks, there are nearly 40 rules you should not break when you are using them.  This knowledge is passed onto children from their parents and grandparents but, again, you don’t need to be alarmed, because not many Japanese adults can say they know them all either.

Having said that, there aren’t many Japanese who do not know that the following use of chopsticks is considered more taboo than bad manners. 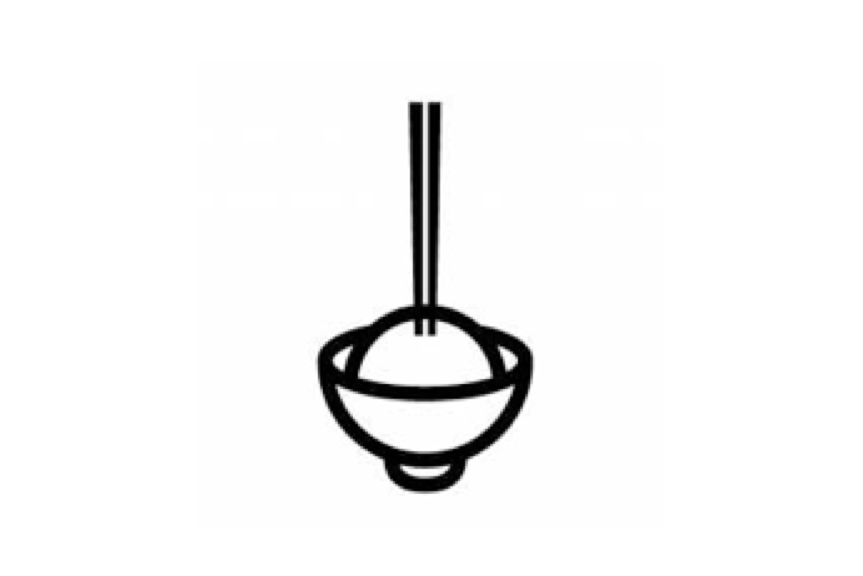 During Buddhist funeral, a bowl of rice is placed at the feet of the deceased, with chopsticks stuck in it as the last meal in this life.  Because of this, it is considered taboo to stick chopsticks in a bowl of rice at any other time. 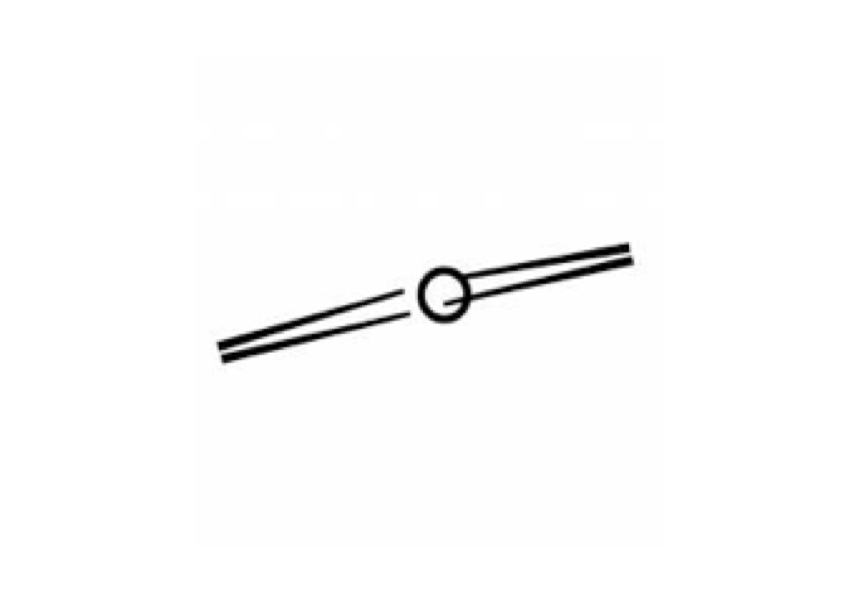 If, for example, you want to give something from your plate to someone else at the table, pick it up with your chopsticks and place it on the other person’s plate. 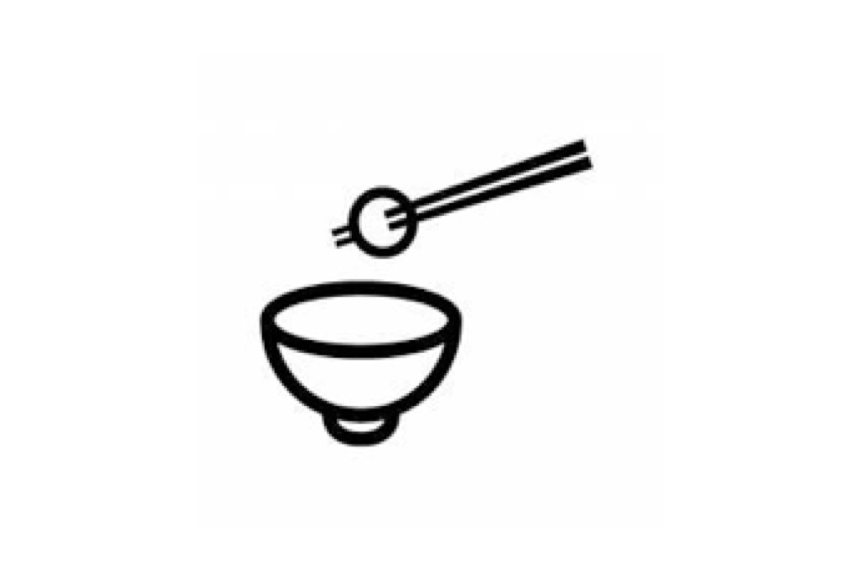 Some food is slippery or awkwardly shaped and impossible to grab hold of with chopsticks.  You might be tempted to stab it with your chopsticks, however, this is an impolite use of chopsticks as it is what Japanese people do to test if the food is cooked or not.

This is associated with the practice of picking up cremated bones at a funeral.  When picking up a piece of cremated bone, sometimes it is done by one person or sometimes two people at the same time.  Picking up the same piece of food with another person reminds us of this so it is seen as bad manners.

This is because it just doesn’t look very pleasant for fellow diners to see.

It looks like you are returning it because that particular piece of food was bad.

Dithering is not seen as a graceful attitude and this use of chopstick displays indecisiveness.  Make up your mind which piece of food you want first before you reach for the plate.

This is not the correct way to hold chopsticks.  Also, it can look as if you are about to stab someone so you are seen as threatening.

This is probably rude outside Japan also.  The gesture of pointing to someone itself, even with a finger, is not very polite.

Lining up in a queue

When you live in Japan, you see people queuing everywhere: a queue on the platform of the train station, a queue outside a tiny noodle shop or a queue outside an ATM machine.  I once queued for two hours to get a ticket for a very popular art exhibition and two more hours to actually enter the building.  Often long queues mean popularity, and it attracts even more people.

The Japanese seem to have a reputation for liking queues, but this is not actually true.  None of us like queuing, but if we have to wait for something, we would rather do it in an orderly fashion.  That’s why you see queues everywhere and people who see it reach a conclusion that “Japanese people love queuing!”

When you see a queue outside a ramen shop you want to try, make sure to join the queue.

Manners you acquired as a child are difficult to stop so you might find it hard not to blow your nose in public.  If you need to, try and do it discretely in the corner.

Quiet on the public transport 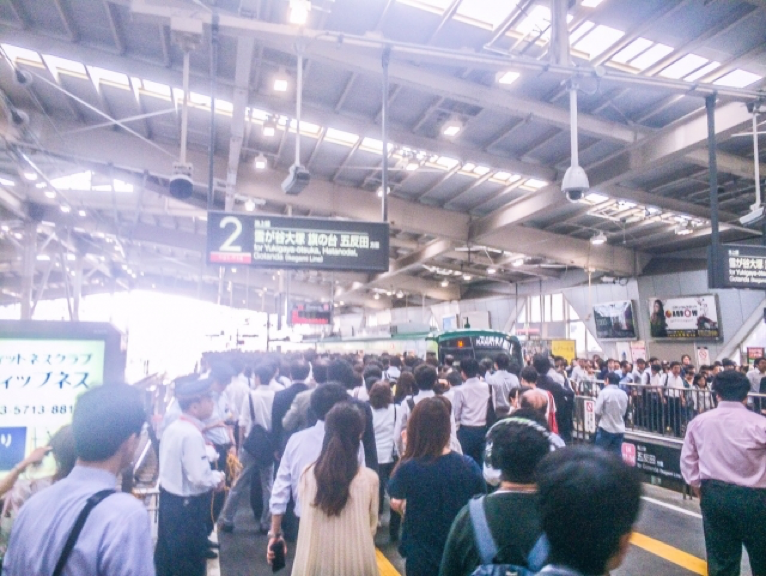 Trains in large cities run every few minutes, carrying hundreds of people every day.  You might have seen an image of station staff pushing passengers into an already overflowing carriage during the commuting hour.  This actually happens, and it shows how busy it can be but surprisingly it is very quiet inside the carriage.  Although most of the passengers carry Smartphones, they are not allowed to speak on them.  Sometimes you might hear a group of students chatting excitedly but most of the time the only sound you hear is the recorded message announcing the name of next train station.

Whether you are on a bus or train, in a big city or a tiny village, remember to put your phone on “manner mode” or set it so that it vibrates rather than rings.

No tips at restaurants 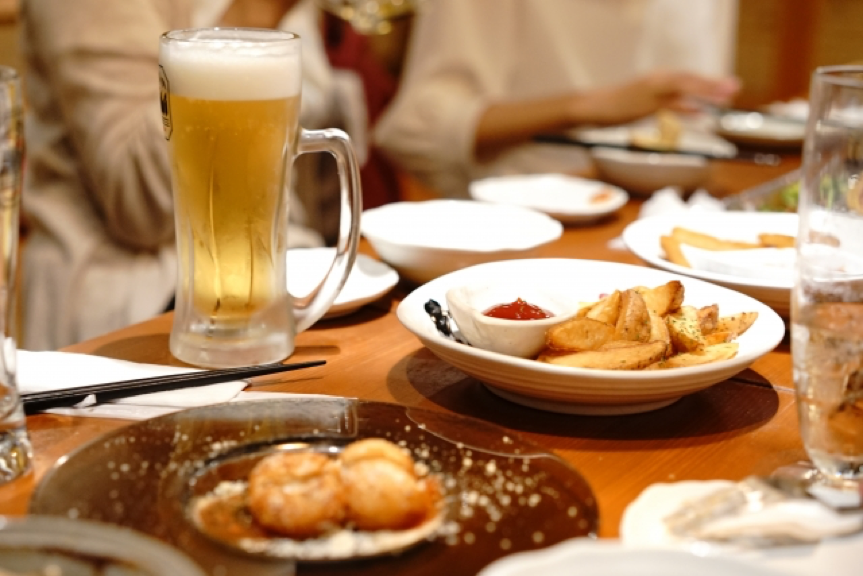 When you dine at restaurants or izakaya (pub) in Japan, there is no need to tip.  This is because it is included in the bill.  It’s usually 10 to 15 % and it usually tells you this on the table or somewhere on the menu.

While we are on the subject of dining, there are few things you might also find useful.

Instead of asking for the bill, the staff will bring it to the table as soon as all the dishes you have ordered have been served.  The waiting staff will ask if everything is ok.  If you say “Hai (はい)”, then he/she will leave the bill on the table or in a holder placed on the table.

Because you’ve got your bill, it doesn’t mean you cannot order any more.  You just ask the staff what you want and once that’s been served, they’ll bring another bill just for that.

When you have finished your meal and are ready to leave, you take it to the till by the entrance and pay.  Don’t forget to say “Gochisou sama deshita (ごちそうさまでした)” or “Thank you” when you leave.

Eat all your rice

In some countries, it is polite to leave some food on the plate at the end of the meal, but in Japan, we like to see a clean plate, especially when it comes to rice.

From an early age, we are taught not to leave any rice – not even a grain – in the rice bowl or plate.  Leaving dishes with rice grains stuck in them is bad manners.  The reason behind this is unclear but most people are told it is because it takes time and effort to produce rice thus we must show our appreciation by not wasting even a single grain of it.  It probably came from a time when rice was scarce and valuable.

Sometimes we just cannot eat another mouthful and that’s ok but it looks better if all the rice is pushed to one corner.

There are plenty of books and websites with information about Japan out there.  It’s an excellent way to prepare yourself for life in Japan.

Following these etiquette guidelines when studying in Japan will help you integrate!

Knowing what to do and how to use certain things helps to reduce some of the anxiety you might be feeling.  Also, Japanese people appreciate that you take an interest in their country.

I hope you find this article useful.  Have a great time in Japan.  Good luck and enjoy!