Japan has long had a huge love of snacks, and since Japan is an island nation, it’s not unusual to see a lot of seafood-based items available to try for the curious seafood-lover. But when it comes to fishy snacks in particular, however, Japan is definitely an expert!

There are still many traditional Japanese snacks, however, that many outside of Japan have never heard of or wouldn’t think of trying!

Explore the Weird and Wonderful Side of Traditional Japanese Snacks

While most of us have heard of ‘weird’ Japanese foods like umeboshi (pickled plum) and natto (fermented soybeans), there is a whole host of snacks and side dishes that may get the side-eye in other countries but are completely normal (and mostly very tasty!) in Japan.

Below are just a few of the most popular fishy snacks available in Japan for all the seafood lovers out there. Maybe you’ve even tried some of them already!

Made using surimi (a fish or meat paste commonly used to make crab sticks) gyoniku soseji, or ‘fish meat sausage’ in English, is perhaps the most popular of all the snacks on this list.

Although I’m not the biggest fan of the fish sausage, I think it’s great for both kids and adults as it’s an easy way to increase your fish intake without the hassle and cost of preparing it from scratch!

As it’s so versatile, it makes a great addition to salads or as an extra ingredient in your pasta, and if you’re trying to reduce your meat intake, it’s the perfect replacement for a meat-based sausage. Why not try using this fishy snack in your next meal or trying as is? 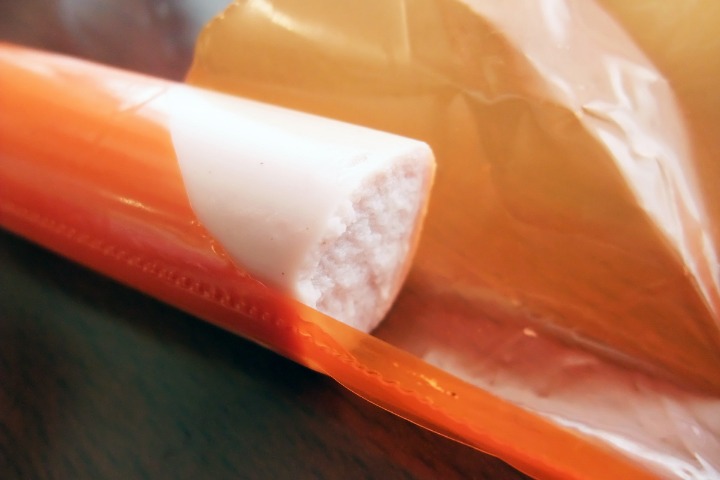 Traditionally made as one of the dishes making up Osechi Ryori, tazukuri are infant whole sardines cooked in a sweet soy sauce and honey glaze.

The sweetness of the honey perfectly complements the salty umami flavour of the soy sauce, making for a sweet and savoury snack that goes perfectly with beer!

If you’re not a fan of the mix of sweet and savoury, I wouldn’t recommend tazukuri, but if you’re a lover of things like sweet potato and honey-glazed sesame snacks, this might be the snack for you! 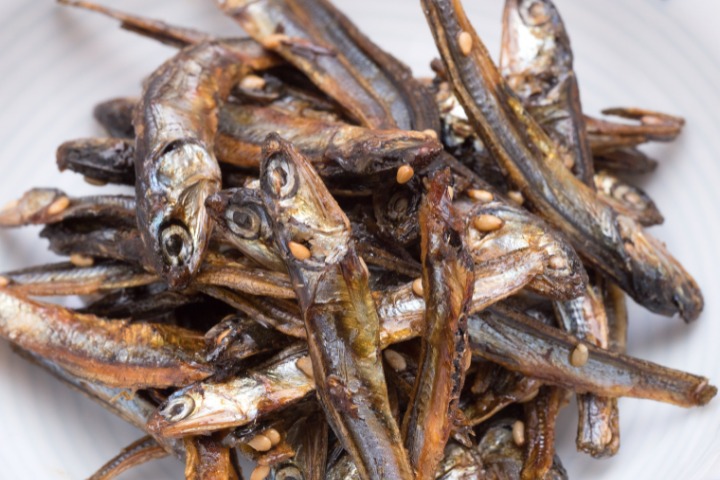 Similar to tazukuri, niboshi or iriko (炒り子), as they are known in Western Japan, are dried whole infant sardines usually used for making dashi stock that can also be eaten as a snack.

However, whereas tazukuri is known for being both sweet and savoury, niboshi is known for its umami flavour, complimented by the saltiness of the fish.

If you want to try niboshi, I would recommend going for taberu niboshi, which are made with the purpose of eating specifically as a snack rather than for dashi, so it’s usually lower in sodium content.

Not only is niboshi is great for kids because of its high fatty acid content along with the large amounts of calcium and protein, but it’s also very tasty too! 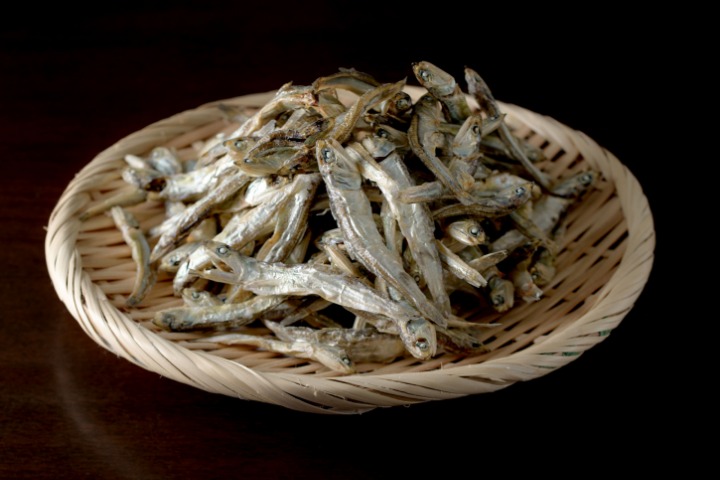 Surume, or dried shredded squid, is a staple of the traditional Japanese snack world. Made by shredding whole dried squid, it is commonly served as an otsumami (a snack served with alcohol) in izakaya across Japan.

Many coastal Asian countries also eat variations of surume, so you can find it all over Asia, but in Japan, it’s usually eaten as is and without sauces or seasonings.

Surume has a strong sea flavour, so if you enjoy delicacies such as sea urchin and oyster, then I’m sure you’ll enjoy this seafood snack! 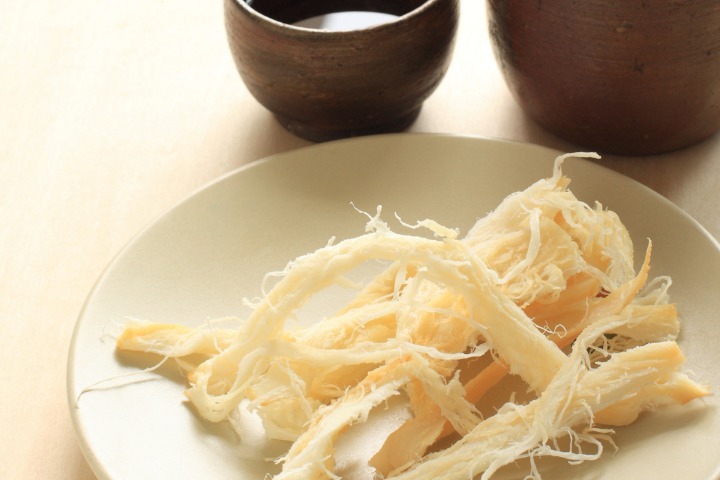 Shirasu is one of the more interesting side dishes on this list. Not because it is unique in itself, but because of where you can find it. Whilst shirasu can be eaten alone as a snack (and is, in fact very easy to eat because there’s no need to remove any bones), it’s also recently become a popular topping on foods from ramen and pizza to even ice cream!

Why not try a shirasu hot dog in Kamakura? Or, if you’re feeling more adventurous, why not go for a famous shirasu soft-serve ice cream in Enoshima? Yum! 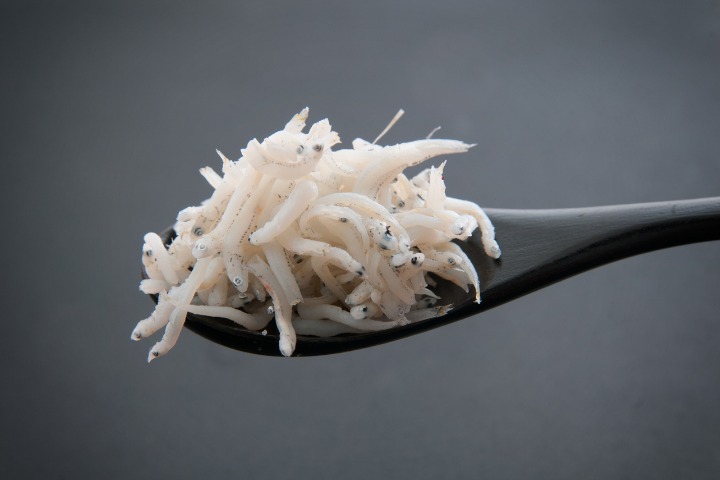 Kuki wakame can be found individually packaged in most supermarkets in Japan, making it a great option to take to work or school as a healthy snack.

Like most seaweeds, wakame is full of health benefits. Not only is it high in iodine (which is good for your thyroid), but it’s also low in calories with a high nutritional value!

This makes it a great option for those who are watching what they eat but want something to avoid that kuchisabishii (口寂しい lonely mouth) feeling. In other words, it is a great snack to keep your mouth busy!

On the other hand, since seaweed, and wakame in particular is so high in iodine, consuming too much can also lead to problems like nausea and diarrhoea if a lot is eaten over a long period of time, so watch out! 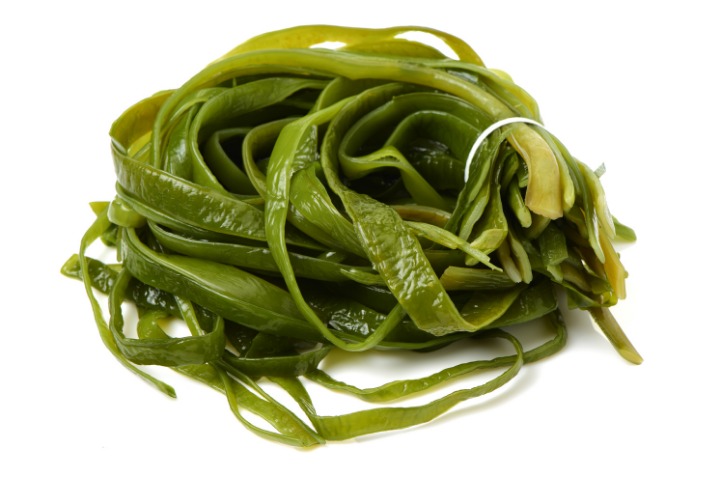 Japan has a rich culinary tradition that extends beyond the dishes known outside of Japan.

And while not everything on this list will tickle your fancy, I’m sure you’ll appreciate the variety of flavours and health benefits offered by them!

Why not try one of these traditional Japanese snack foods the next time you’re after something a little more adventurous?