You’ve heard of Romeo and Juliet, but do you know about Orihime and Hikoboshi? Starting on July 7th Tanabata, the summer festival celebrating these star-crossed lovers begins.

Across Japan, there are decorations, food vendors, parades and yukata-clad festival-goers. You might be asking, what are we celebrating?

The two were soulmates and instantly fell in love. They married soon after meeting. They were so happy to be together that they spent all their time together and neglected their jobs. Princess Orihime no longer wove the beautiful clothes that her father loved and Hikoboshi allowed his cows to wander freely across the heavens.

This angered Tentei and to punish the lovers he separated them across the Amanogawa (heavenly river), which we know as the Milky Way; galaxy. Princess Orihime was devastated by the separation from her soulmate. She spent her days wishing across the stars that they could one day be reunited. Her tears of loneliness created the summer rainy season. Taking pity on his daughter, Tentei gave Orihime and Hikoboshi permission to meet once a year on the 7th day of the 7th month if they both worked hard throughout the year.

When Orihime and Hikobohsi first tried to meet they realized there is no bridge across the river. Orihime sat on the banks of the Amanogawa and cried until a flock of magpies came to her rescue. The Magpies created a bridge with their wings which allowed Princess Orihime to finally cross the river and meet her love, Hikoboshi.

On Tanabata, we celebrate the reunion of these two star-crossed lovers. However, it is said that if it rains on Tanabata the river is too vast to cross and the two must wait until the next year to meet again. The rain on Tanabata is known as “the tears of Orihime and Hikoboshi”.

How to Celebrate Tanabata 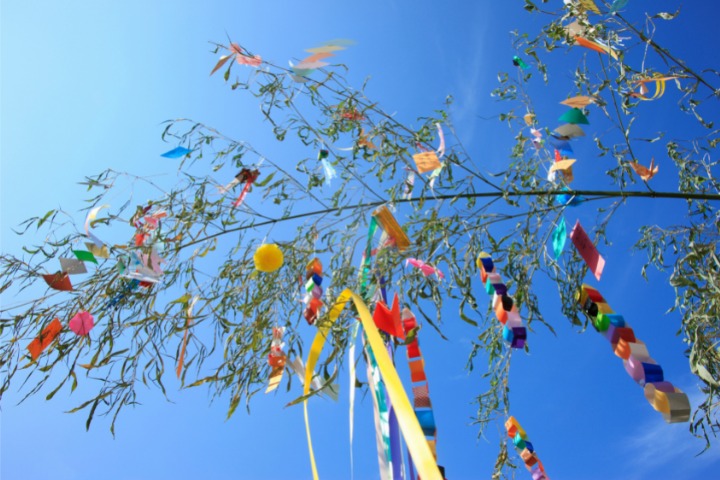 There are many ways to celebrate Tanabata across Japan. The most common practice is to hang up a colored piece of paper (Tanzaku) with a wish written upon it. Many choose to write their wish in the form of poetry such as a haiku. These pieces of paper are then hung upon bamboo. As the bamboo reaches towards the heavens, we hope that like Princess Orihime, our wishes can one day come true.

Often, other decorations and ornaments will be hung alongside one’s wish. Traditionally, there are 7 different types of decorations used, each of which brings along a unique significance:

Typically, at midnight or sometime the next day, the wishes, decorations and bamboo will either be set afloat on a nearby river or they will be burned. This is similar to the soon after Obon festival tradition of lighting candles and sending paper boats down the river.

If all the festivities get you in the mood for some singing, there is a traditional Tanabata song:

The bamboo leaves rustle,
shaking away in the leaves.
The stars twinkle
on the gold and silver grains of sand.
The five-color paper strips
I have already written.
The stars twinkle,
and there they will watch us.

Depending on the region there are different ways to celebrate Tanabata. From food vendors and carnival games to parades and a prestigious Miss Tanabata pageant.

Wondering where the best locations are to celebrate Tanabata? Look no further.

Where to Celebrate Tanabata 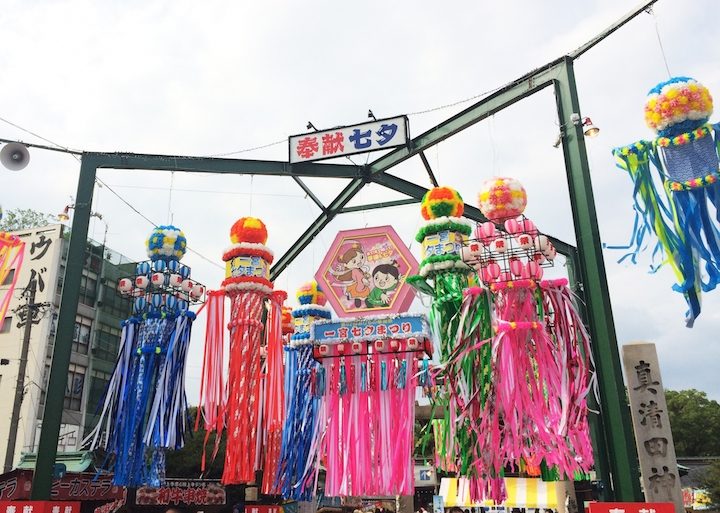 The most famous Tanabata celebration occurs in Sendai. Sendai is the capital city of the Miyagi Prefecture and is the second-largest city north of Japan. It is important to note that the Sendai Tanabata festival occurs from the 6-8th of August. This is because they base the date of the festival off of the original Japanese lunisolar calendar rather than the Gregorian calendar which Japan officially adapted to in 1876.

The downtown area of Sendai goes all out with their decorations. Thousands of colorful streamers fill the streets creating a breathtaking rainbow canopy. Along with decorations, there are live performances and delicious local food. In the evenings there is an amazing firework display. Be prepared for crowds as Sendai gets more than 2 million visitors for the festival each year.

If you are planning on being in Tokyo for the festival, there are several different locations you can go to partake in the festivities. In Shitamachi, Tokyo’s historic downtown district, the famous Kappabashi street is lined with decorations. Enjoy the local shopping and food vendors while the parade passes by.

At the Asagaya Pearl Center in the Suginami Ward, the mall is filled with decorations. This particular festival is known for its giant paper-mache characters. Look to find your favorite mascot or Ghibli character hanging above.

At the Zojoji Temple in the shadow of the Tokyo Tower, they hold an annual candle night for Tanabata. Over 3000 candles are placed in bags with a unique wish written by local school children. The candles are then placed in front of the temple to mimic the Amanogawa.

On the outskirts of Tokyo, there is the Irumagawa Tanabata festival. Over 300 vendors fill the streets with food and carnival-like games. Make sure to check out the “fishing game” where you can bring home any goldfish that you can catch with a small net. It is worthwhile to stay through to the evening as they put on an impressive firework display.

A little outside of Tokyo in the city of Hiratsuka there is a large Tanabata festival which gathers over 1.5 million visitors a year. Throughout the city around 3000 large bamboo ornaments are placed. Over 80 are congregated in the Shonan Star Mall making for a spectacular display. The city also puts on a pageant where young women compete for who is that year’s Princess Orihime. 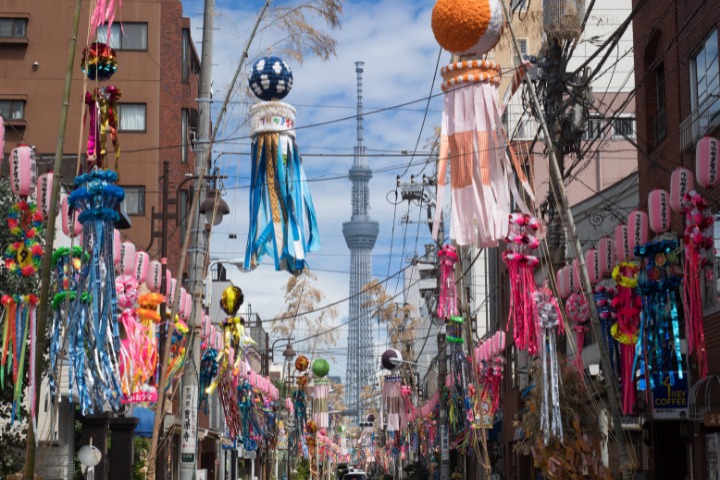 In another city a little outside of Tokyo, Ogawamachi, there is a smaller yet no less fascinating Tanabata festival. With events from a float parade, drum and dance performance and epic firework display, this festival is sure to excite. Consider wearing a yukata to fit in with the other local festival-goers.

The city of Ichinomiya in the Aichi Prefecture is known for its textiles, so it comes as no surprise that they love to celebrate the weaving Princess Orihime. The cities Tanabata festival is one of the country’s largest bringing in over a million visitors on the festival weekend. Typical decorations are displayed, and food vendors are plentiful. Make sure to check out the Masumida Shrine dedicated to Amenoho no Akari no Mikoto, son of the goddess of fabric and weaving. The shrine is filled with decorations and features ongoing performances of music and dance.

Anjō, a city in the Aichi Prefecture, hosts a large Tanabata festival which brings in around a million visitors. Similar to the festival in Sendai, the Anjō Tanabata festival takes place in early August. The festival’s specialty is their wish balloons. Over 3000 balloons with wishes attached are released simultaneously, creating a one of a kind spectacle. Consider staying until the evening as they light up the streets, causing the paper decorations to glow a colorful aura.

In Osaka, there is a truly magical celebration of Tanabata in the evening. The festivities begin with a concert followed by a boat parade. Then, over 3000 LED lanterns are set afloat on the Ogawa river. The glowing lanterns turn the river into the Milky Way. Make sure to find a location near the river to take in the view. For a special viewing experience consider booking a ticket on a cruise ship. There, you can float among the stars while enjoying food and drinks.

No matter where or how you choose to spend Tanabata, you are sure to have a special time. The colorfully decorated streets create for a unique photo-op. Food vendors allow you to enjoy the best of Japanese cuisine on a budget (make sure to bring cash as most vendors are cash only). Other street vendors will allow you to purchase one of a kind Japanese crafts guaranteed to make your friends and family at home jealous. 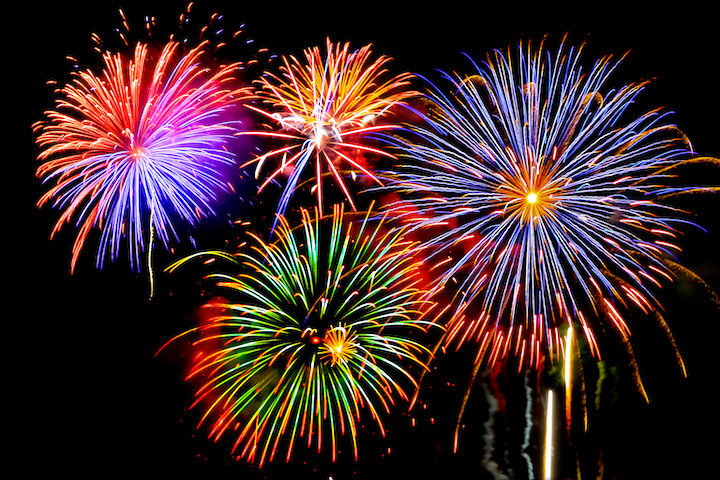 The evenings of Tanabata are some of the most magical summer nights. World-class firework displays light up the night sky. With love in the air, you could find your soulmate standing next to the heavenly river. Best of all Tanabata is a time for your dreams to come true. So, write a wish on a tanzaku and look upon the stars. No matter what, celebrating Tanabata in Japan is a dream in itself.

What Are Your Plans for Tanabata This Year?

Send us a message and let us know what your plans are this year.

Check out our other summer article:

Yukata in Summer – Where Can I Buy a Yukata in Tokyo?