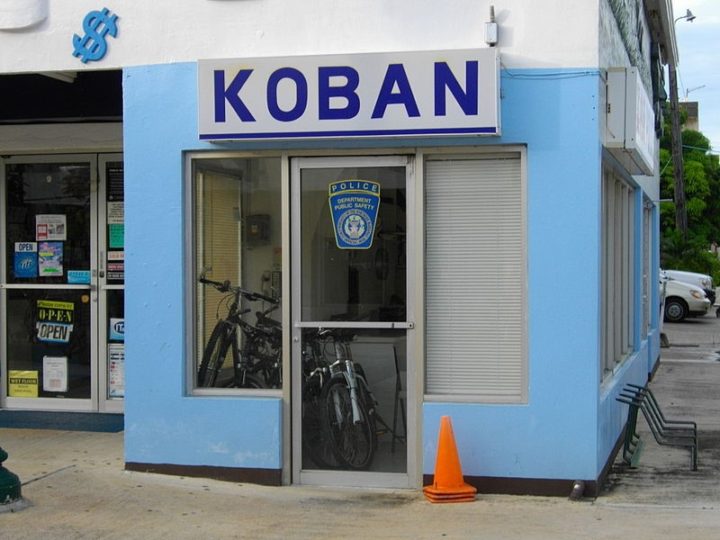 A koban (交番) is like a police sub-station with polices stationed there, and within a certain police station (警察署) jurisdiction (管轄), there are usually a bunch of these boxes . These kobans are often located in close proximity to train stations, major roads, and are otherwise strategically located so that officers stationed there can readily access areas within their jurisdiction.

My daily trail usually revolves around the hubs of Tokyo. I live in Shimokitazawa, Setagaya ward and work in both Shinjuku and Shibuya . Since I enjoy running  and I often run or bike to my office, I know the roads from Setagaya to Shinjuku like the back of my hand, thus I also know where almost every koban falling under the jurisdiction of Yoyogi Keisatsu Sho, Shinjuku Keisatsu Sho, Daita Keisatsu Sho are.

Trust me when I say, it is impossible to make the three mile trip from Shimokitazawa to Shinjuku without passing at least two or three of these kobans, this decentralised system has worked pretty much seamlessly in safeguarding Japan. Additional purposes of these sub-stations include: helping people who are lost and collecting lost items passerby people bring in. In addition, in Tokyo, pretty much every koban lists traffic accident statistics from the previous day (in other jurisdictions, these figures are not listed).

However these features of the koban are not what we are going to talk about today,  as you might have probably guessed we are going to dive into the wanted posters that are plastered at every koban all over Japan.

On many of these wanted posters, the miscreants committed their various felonies years and sometimes even decades ago. They are Japan’s “Most Wanted”. 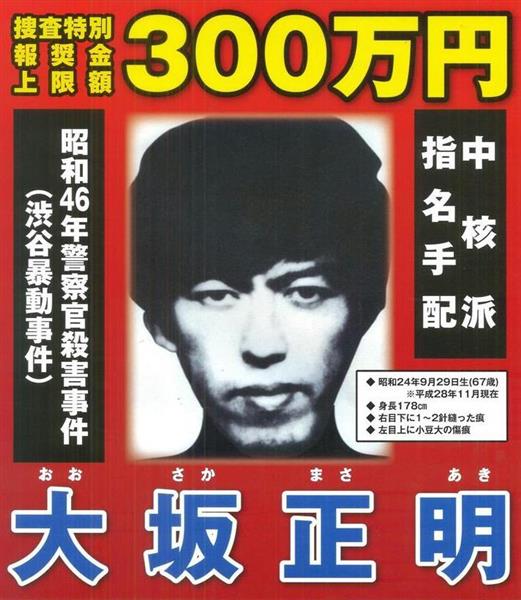 This guy is an extreme left-wing radical who, in 1971 along with several other miscreants, murdered a police office in Shibuya during a protest against the decision to return Okinawa Prefecture to the Japanese government because, as per the agreement, the US would be able to maintain a military presence in Okinawa. He was on the run for nearly half a century before he was finally arrested in 2017 in a hideout in Hiroshima, and he was promptly charged with the murder of said police officer. When I heard about this case, I was perplexed. Until 2010, there was a statute of limitations for murder of 15 years in Japan (in other words if the crime was committed 15 years ago and hasn’t been solved then any charges is then dropped), and as this murder occurred in 1971, he should have already been in the clear.

The only (legal) exception to this rule is when a fugitive flees abroad, in which case, the 15 year stop clock is stopped, but Osaka never left Japan. From my research, the reason this guy was still prosecutable was because a co-defendant, due to mental illness, had the legal proceedings against him dismissed in 1981, and in cases where co-defendants have not been arrested, the case remains open. So, from 1981, the case remained open and then, in any event, the statute of limitations for murder was abolished in 2010, so this lefty wingnut was arrestable in 2017 and as he was, in fact, arrested. 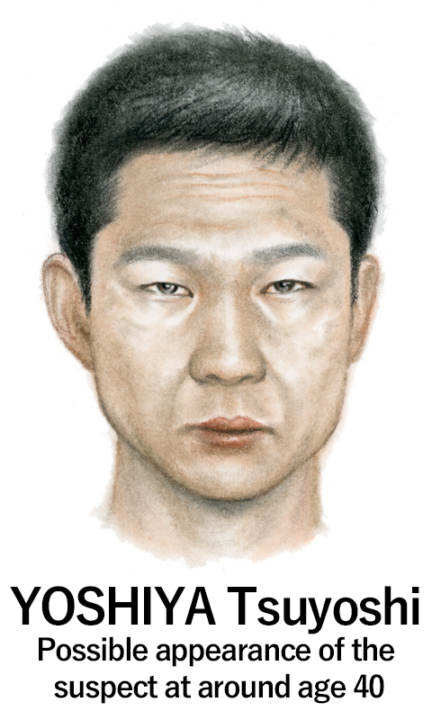 The following is my translation from the Keishicho website: “This man is the main suspect in an incident when he attacked a group of two men, resulting in the death of one of said men from stabbing (the victim was 19 at the time). The conflict arose from a dispute in their motorcycle gang in a condominium in Tokyo-To, Adachi-Ku, Ayase 5 or the vicinity therein on Friday June 04, 1999. In a series of incidents, while 15 people have been apprehended, this man remains at large.” The drawing above depicts an artist’s rendition of what he may look like now. 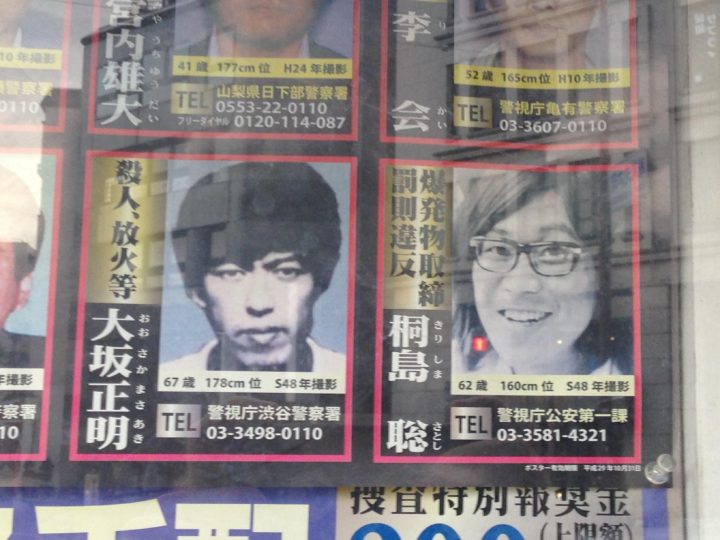 This guy belonged to the same radical left-wing group as Masaaki OSAKA, and he planted a home-made bomb at the Korean Institute of Industry and Economy located in Ginza in Tokyo. The following day, said bomb caused damage to the building and, following mass arrests of lefties in this group, this KIRISHIMA beat feet, and to this day remains at large, his whereabouts, and whether he is even alive or dead, are not known. 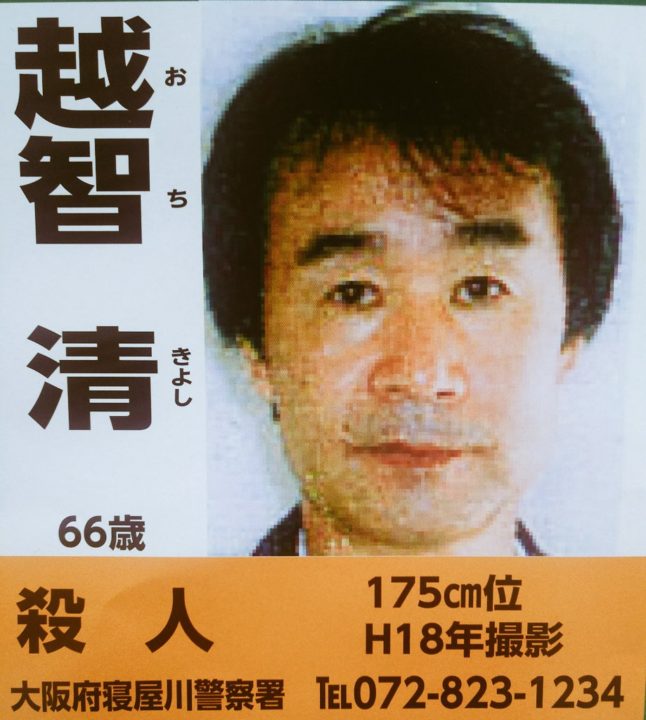 This guy is wanted for the murder and dismemberment of his wife back in 2006. The police suspect the motive for the crime was money problems that arose between the two (to wit, this guy owed his wife a lot of money). He was suspected of hiding out on a remote island in Kagoshima Prefecture. He was last seen heading into the mountains on this island and the police suspects that he died in the wilderness. 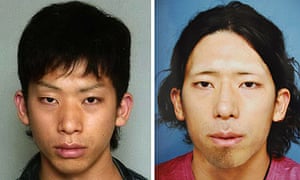 This was a guy on a wanted poster I actually remember. I came to Japan in 2006 as an English teacher, and in 2007, this miscreant raped and murdered a female English teacher in Chiba Prefecture. He beat feet and was on the run for several years. He was captured in 2009, and in his two years on the run, he worked as a day laborer, saved up a substantial amount of money, and even had plastic surgery. He was subsequently convicted and, according to WIKI, sentenced to life in prison. It should be noted that in Japan, as far as I know, there is no real “life in prison” as per American standards. In America, when someone is sentenced to life in prison, he will quite literally die in prison. In Japan, and in many other countries, a life sentence is anywhere between 15 to 25 years. In Japan, while these laws have become stricter in recent years, a life sentence does not literally mean a “life sentence.”

While we’re talking about all these miscreants, let us also touch briefly on crime, safety, and the like in Japan. Japan is one of the safest countries in the world. According to statistics from Keisatsucho, there were 915 murders in Japan in 2018. By way of comparison, my hometown of Baltimore Maryland in the United States of America clocks in over 300 murders a year (Baltimore is a city of roughly 620,000 people, and yet it produces one third of the murdered bodies that Japan (population of roughly 120 million) produces in a year). Of these 915, 886 people were arrested, leading to a clearance rate of 96.8%. In Baltimore, by way of comparison, almost half of all murders remain unsolved. Suffice it to say, Japan is a very safe country. Having said that, however, crime does happen in Japan, and in particular, there are several areas you should be careful about.

In Japan, unlike America, there is no private gun ownership. One of the reasons burglaries in America are actually quite rare is because so many people privately own guns. In Japan, however, burglars do not need to worry about facing armed occupants, so burglaries do happen. Where I live in Saitama Prefecture (I moved while writing this article), burglaries are so common that private security companies regularly patrol the neighborhood, issuing warnings. Here, commonsensical measures such as always locking your doors and windows should suffice. I lived in Shimokitazawa (Setagaya Ward, Tokyo) until a few days ago, and I often would go shopping in the neighborhood for an hour or so without locking my door. It is common to get a false sense of security in Japan, and I have been known to do so, but to be on the safe side, you should always lock your doors and windows.

Here again, these do happen. My bike was stolen a few years ago in Tokyo. Granted, the lock was broken and I had left it as such, but even without presenting such an obvious target, professional or semi-professional thieves who have the tools to break a bicycle lock without any real effort do operate all over Japan. A simple lock will deter most, but other measures such as an additional lock and only using well-lit parking areas around train stations (equipped with security cameras) will deter even the more hardened bike thieves out there.

A common problem, especially in Tokyo and its more urban environs, is the groping of women by sexual deviants on (extremely) crowded commuter trains. If you have never been on a rush hour Tokyo train, this may seem weird to you, but google search “crowded Tokyo train,” and you will see what I mean. These trains are so unbelievably crowded, with passengers literally stacked up against one another, that groping a fellow passenger is not only possible, it’s also very hard to prove. Your best bet, as a woman (women are generally the victim of this crime) is to ride the “ladies’ car” during rush hour. I cannot speak for all train lines, but many have special “ladies’ cars” during the rush hours in the early morning and early evening. Only women and young children can ride these cars. While there is no concern of encountering a groper on these trains, the passengers are all women and many of them tend to fall and smash into fellow passengers with the jostling of the train. Take the good with the bad, I suppose.

A similar issue, for the fellas, is the issue of enzai (false accusation). When you are on a very crowded train, if it is possible, keep your hands up holding the straps or bars of the luggage rack so that, God forbid, someone should take the train jostling the wrong way, your hands are visible and you can say with certainty that you did not grope, grab, or touch anyone.

This is actually quite common in Tokyo, especially in areas like Shinjuku, Shibuya, and other major hubs. In many of these major hubs, kyakuhiki (people whose job it is to attract customers to certain establishments) will approach you and recommend their establishment. Those who are doing this for an izakaya are usually legitimate and are also usually pretty helpful. The problem is dealing with the kyakuhiki for bars, and especially for more….red-lightish type establishments. It is very common to be offered unlimited drinks (nomihodai) for a set price (usually reasonable), but once you actually get to said establishment, you’re told you owe 100 USD to the kyakuhiki for this introduction, and all kinds of other fees you didn’t know about. You go in thinking it might cost you 30-50 USD, and end up spending ten times as much. Also, many of these establishments are mobbed (Yakuza) up, so you can’t really refuse payment. Especially in Shinjuku, the shadiest kyakuhiki are all Africans who can speak English, which is the reason they’re employed. They will offer you a pie in the sky, such as cheap drinks and the prettiest girls, but in reality, you will end up paying through the nose. Do not go to any of these places.

I hope this has given you some insight into crime and punishment in Japan.