Since their arrival to Japan in the 1970s, konbini (convenient stores) have dominated the world of convenient living.

So much so that whether you’re a short-term visitor or a seasoned resident, it’s impossible to miss the cultural significance konbini have come to hold in Japan.

The Humble Origins of the Konbini in Japan

The convenience store found its way to Japan in the early 1970s when Japanese supermarket chain Ito-Yokado bought the Japanese franchise rights to American convenience store giant 7-Eleven. From there, the growth of similar chains, including the iconic chains FamilyMart and Lawson, helped increase the pervasion of konbini in Japan.

However, what konbini owners had to learn quickly was that what was popular and convenient for American customers wasn’t among their new Japanese market, giving rise to the entirely Japanified convenience store we see across Japan today.

Currently, there are over 55,000 konbini across Japan that not only offer products but also several services, including ATMs, printers, and even the ability to pay your taxes!

Of course, however, in the cut-throat world of konbini, if you don’t have a unique selling point, you will quickly lose your place in the convenience store rankings.

From Pringle’s flasks to ice cream floats, find out what makes each konbini chain unique! 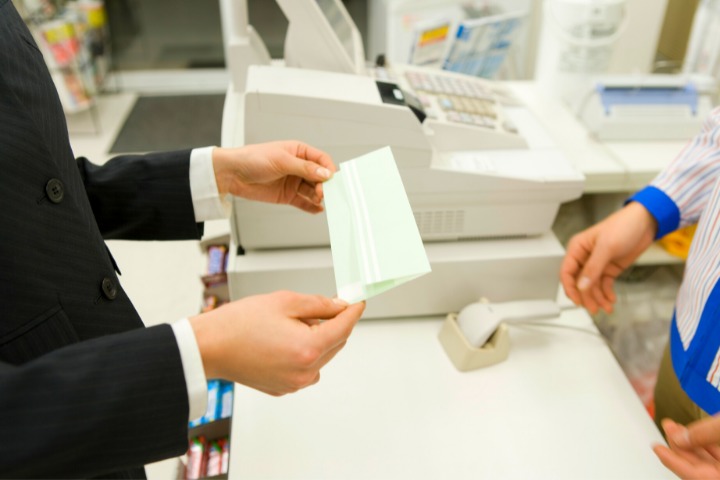 By far the biggest convenience store chain in Japan, Japan is home to a whopping thirty percent of 7-Eleven’s 71,000 worldwide stores.

Although at its core, 7-Eleven is an American brand, since it was brought over to Japan in the seventies, it has evolved within Japan to become a symbol of convenient Japanese living.

A few years after its arrival in Japan and understanding the need to adapt to survive, 7-Eleven began to replace the standard hotdogs found in American stores with onigiri (rice balls), a staple of Japanese food culture, giving rise to the product that would put 7-Eleven on konbini map. Since then, 7-Eleven has continued to release a torrent of delicious food products, leading to the chain being seen as the cold food king of the konbini world.

But, if you’re looking for something a bit warmer, 7-Eleven also has a range of premium Ramen created in collaboration with some of Japan’s top ramen shops (including Michelin star restaurant Nakiryu)! 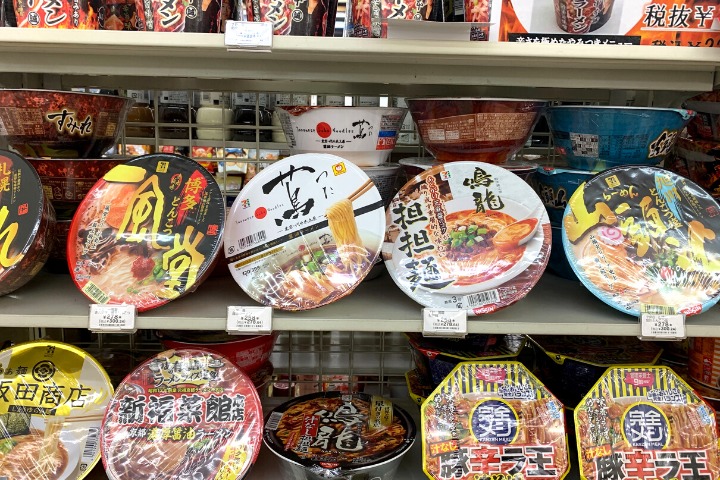 Coming in close behind 7-Eleven in terms of store numbers, FamilyMart is one of the top konbini chains alongside 7-Eleven and Lawson, with a huge 17,000 stores across Japan.

Famous for its range of hot foods, including yakitori (chicken skewers) and korokke (croquette), FamilyMart is arguably best known for fami-chicken (fami-chiki)—a tasty fried chicken snack that can also be found in other konbini under different names. Similar in taste to KFC chicken, fami-chiki is softer and cheaper, making it the perfect late-night snack after a long day.

It doesn’t end there, however. Last year, FamilyMart came up with the simple but ingenious idea of selling buns set with tartare sauce to be eaten in combination with fami-chiki (or korokke for the more adventurous), which made for the perfect addition to a great product.

Making up the last of the holy trinity of konbini is Lawson. Lawson, while not the most popular of the larger konbini chains, has made a name for itself by collaborating with other large brands and expanding into the realm of healthy living through its Natural Lawson stores, which offer a variety of vegetarian options and non-process foods.

From Doraemon-shaped wagashi (和菓子, traditional Japanese sweets) to Yukimi Daifuku pouches, Lawson is no stranger to collaborations that seem to work (mostly). Most notable of Lawson’s recent collaborations include the much-discussed Pringles-themed thermal bottles, which drew a lot of media attention from Pringle fans both within and outside Japan.

Going beyond product collaborations, however, Lawson has even started a store collaboration with the design giant, Muji (無印良品), meaning Lawson customers can buy their favourite products from even the most remote Lawson, which is great news for those in more rural areas of Japan!

Whilst the larger chain stores such as Family Mart and 7-Eleven reign supreme in the world of convenience, it would be impossible to overlook several smaller stores, including Ministop. Ministop, owned by mega-store AEON, is a smaller konbini chain with close to 2,000 stores across Japan’s main island plus a few stores in Vietnam.

Like other konbini chains in Japan, Ministop stocks all kinds of products, including socks, stationary and snacks, while also offering access to ATMs and other services.

What sets Ministop apart from other konbini, however, is its kitchen. Set behind the counter of Ministop’s stores is usually an extensive menu offering a host of fresh food items, including ice cream floats and french fries. Once you have ordered, just keep your receipt with your order number, and wait as the staff head into the kitchen to make your order fresh!

One of the best things, however—or worst things depending on how you look at it—about their menu is the constant influx of new and exciting seasonal items on sale (which currently includes several tasty melon-flavoured options). This means that you never get bored and has made Ministop one of my favourite konbini in Japan. 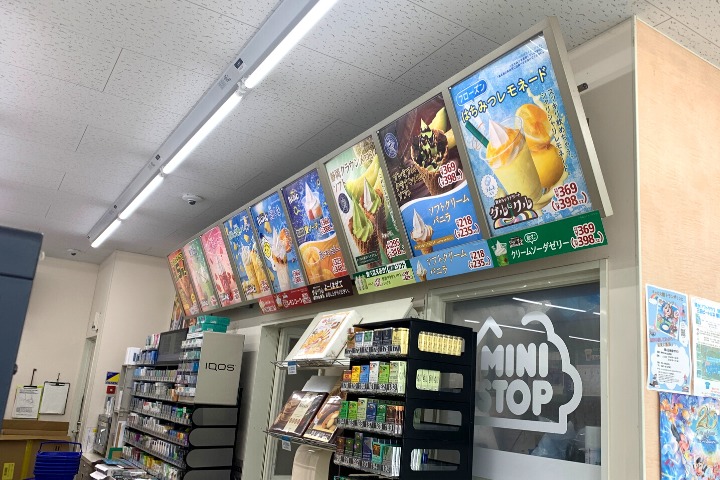 Owned by Yamazaki Baking co. Ltd, Daily Yamazaki is the baking king of the konbini world. While Daily Yamazaki isn’t as well known as other konbini chains amongst visitors to Japan, it’s well-known among those who have lived here for a while for its tasty bread.

Daily Yamazaki offers up freshly baked bread to its customers daily via its in-store bakery, Daily Hot. The bakery is self-serve, so all you need to do is grab a pair of tongs and a tray and load it up.

A happy medium between pre-baked convenience store bread and the higher prices of a specialist bakery and home to a variety of Western and Japanese-style bread, Daily Yamazaki’s bakery offerings are the perfect accompaniment to a steaming hot cup of coffee in the morning.

NewDays is a smaller chain that can only be found in JR train stations around Japan. While the chain itself isn’t as prominent as some others, it has everything you could ask for of a train station convenience store.

NewDays’ stores usually stock several options for souvenirs as well as a few bento (lunch box) options, which are perfect for travellers who have perhaps forgotten to buy a souvenir or need something to eat on the long train journey home!

From early morning underwear to late-night taxes, Japan’s konbini really do make living convenient. And while all convenience stores share the same essential services and products on the surface, it’s truly the small details that make the difference.