There are many unique dishes in Japan that are enjoyed to commemorate seasonal moments, such as the end of the year and New Year’s Eve, and wish for their health and happiness.

What are those Japanese New Year’s foods that are often called gyoji shoku (observance meals)? Let’s find out!

When the new year comes, the Japanese enjoy extravagant dishes called osechi. Traditionally, multicolored meals that show different wishes for the year’s harvest and happiness are served beautifully in stacks of jyubako boxes to “stack up the happiness.” 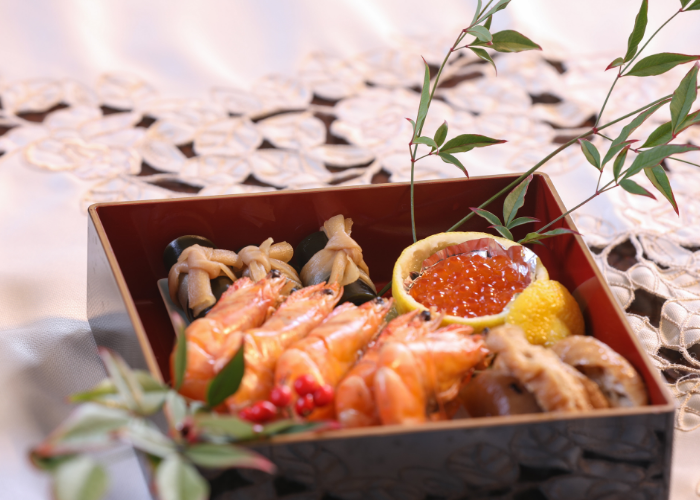 The ingredients vary by region, but a common one is kazunoko (salted herring roe), which shows a desire for long-term wealth in the family because of the many salmon eggs. Packaged osechi goods can be found in department stores and supermarkets. 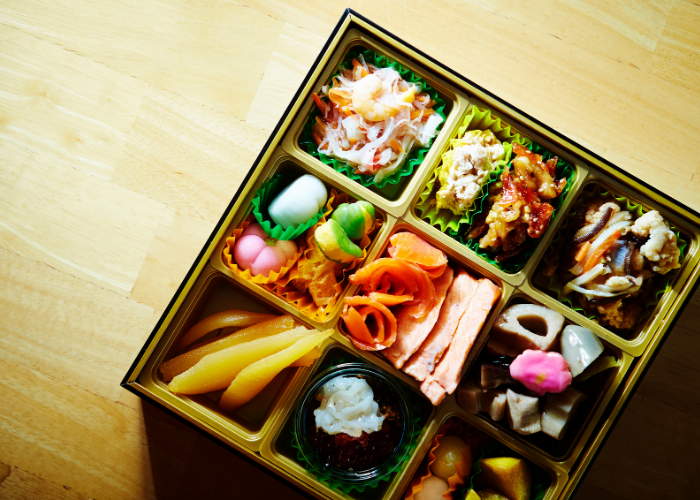 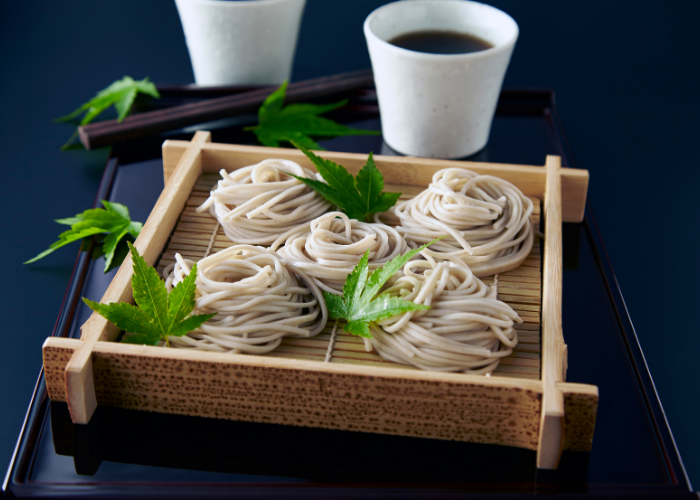 In addition to symbolizing the passage of the year, the long noodles stand for longevity. There are numerous concepts about the origin of toshikoshi soba. People began eating to wish for “lasting health and luck in the family” because the noodles are long and thin. Another meant to “let go of the hardship from the year” because the noodles break effortlessly, rather than other types of  Japanese noodles such as ramen or udon. 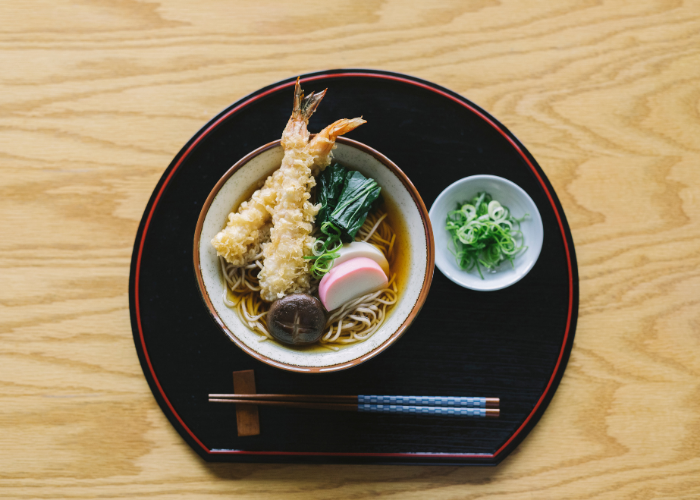 There are a variety of toppings, such as tempura and simmered herring.

Ozoni – For a Safe Year

Ozoni is eaten on the first three days of the year to wish for a safe year ahead. 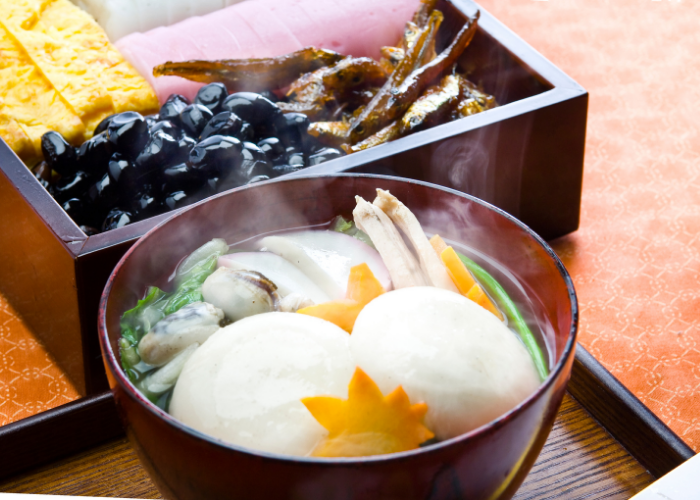 The ingredients vary widely throughout the nation, but the most typical component is mochi (sticky rice cake), cut and cooked differently depending on the region. Some areas use round mochi, and others use square mochi, while some grill and others simmer. 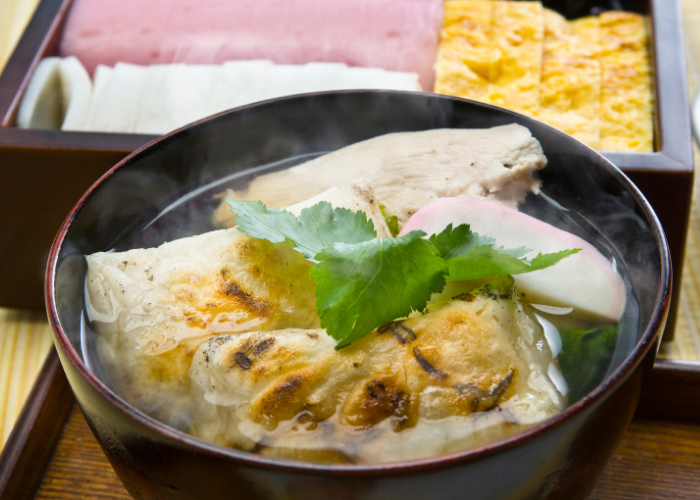 Other ingredients added to the soup differ significantly but can include daikon radish, carrots, chicken, or salmon roe. Miso or sumashi (dashi seasoned with salt or soy sauce) are the most common soup types. Ozoni is often served in locations that offer hatsumode celebrations, as people go to shrines and temples for the first time in the new year and restaurants nearby.

Oshiruko is a dish consisting of mochi and red bean paste made by simmering azuki beans with sugar. 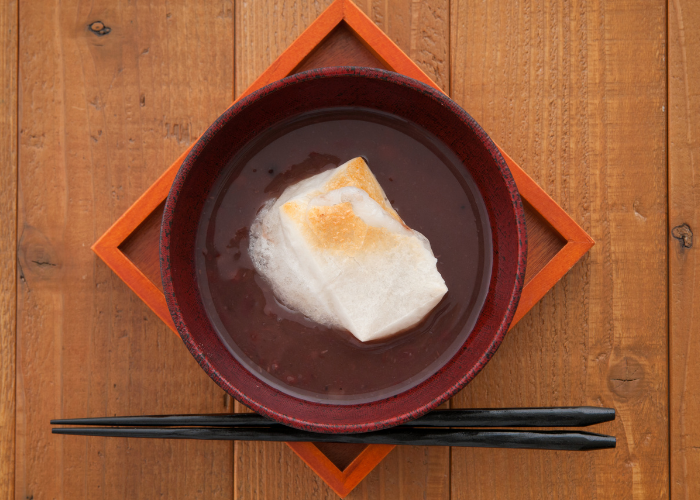 The dish’s liquid consistency and the type of azuki (with or without the skin) differ by area. 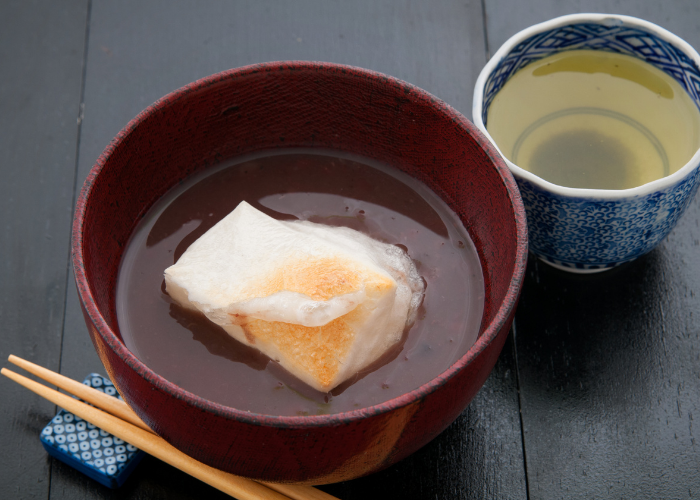 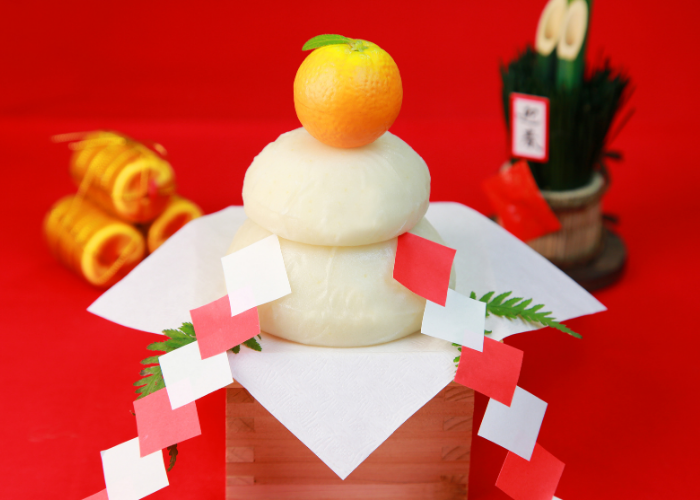 The next dish is nanakusa gayu, which is traditionally enjoyed on 7 January at the end of the New Year period. Rice is cooked with seven varieties of Japanese herbs and seasoned with salt and other seasonings. 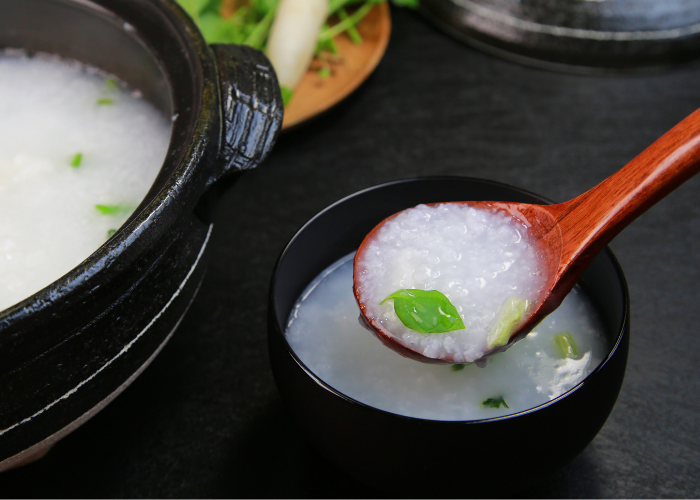 The haru no nanakusa (Japanese seven spring herbs) includes seri (Japanese parsley), nazuna (shepherd’s purse), hotokenoza (henbit), suzuna (turnip), gogyo (Jersey cudweed), hakobera (five stripe wrasse), and suzushiro (daikon). They are absolutely delicious and rich in nutrients and vitamins. Since these herbs are often the first to sprout in early spring, they are believed to dispel evil, and they are eaten to pray for a year of excellent health. 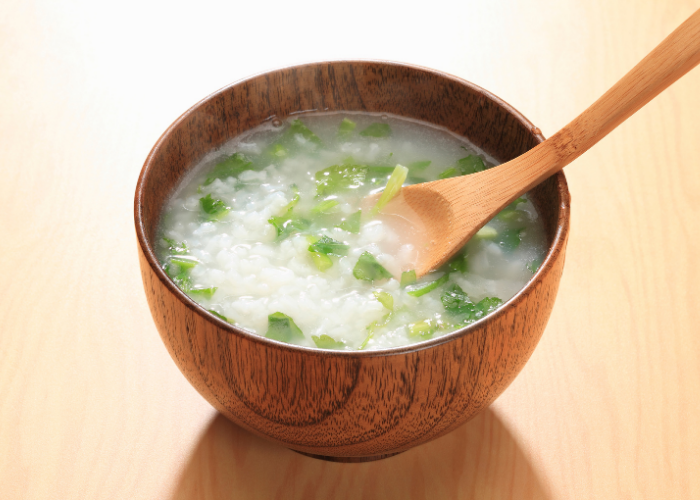 The subtle and nutritious flavors of nanakusa gayu are also meant to relax the stomach, which may be overworked by the New Year’s festivities. This dish is also often served in the aforementioned shrines and temples that offer hatsumode celebrations and can be found in Japanese restaurants as a seasonal limited-time menu item.

Which of These Japanese New Year’s Foods Have You Tried?

These are the top five must-try Japanese New Year’s foods listed by the Guidable team. We hope you had a great holiday!

Just to remind you, please do not forget to wear a mask to protect yourself and the people around you when you plan to go out!

Thank you for being with us going through a tough 2020! We wish all the best for you this year!