Fast Facts About Fuji Mountain – The Highest Peak in Japan

Mt. Fuji is a stratovolcano, which means it is made of lava and ash, located at Honshu Island, 60 miles southwest of Tokyo. It has an elevation of 12,388 feet, with a summit crater of 1,640 feet wide and 820 feet deep, and a base diameter of 31 miles.

Fuji Mountain is considered one of the most famous mountains globally and the highest peak in Japan. It plays a vital role in the country’s preserved culture and tradition, especially that of Shinto.

Fuji-san’s last recorded month-long eruption was on December 26, 1707, until January 1708, where coal and ash flew out of the summit then. Fuji-san is now considered dormant; however, there is a slim possibility that it can erupt anytime. 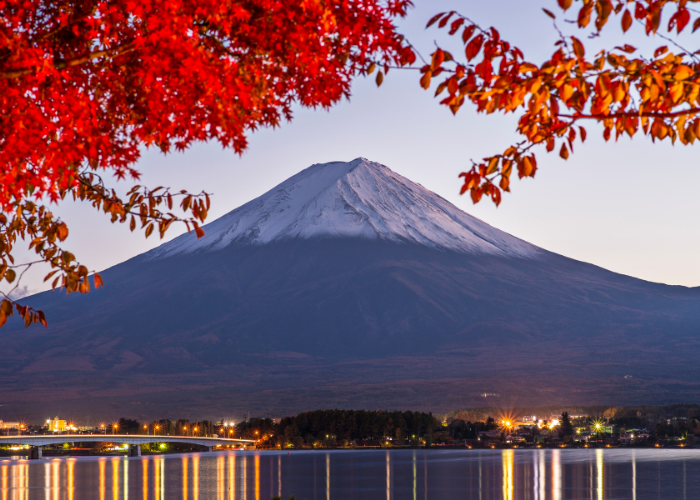 The Legend of The Fuji Mountain Birth

One famous tale about Mt. Fuji’s creation is folklore about a woodsman who was awakened by a loud noise he thought was an earthquake. When he checked near his house, he saw that he appeared a mountain in the land that used to be flat. The woodsman was amazed by the mountain’s mysterious existence that he called it Fuji-yama or the Never-Dying Mountain.

Fast Facts About Fuji Mountain – The Highest Peak in Japan

Fuji Mountain – The Most Climbed Mountain in the World

Although Mount Fuji‘s official ascent season lasts just over two months, it is the world’s most-climbed peak. It attracts almost 300,000 climbers per year on its slopes, a number far higher than the second place of Mount Monadnock in the United States, with around 125,000 people each year.

Fuji Mountain is Made Up of Three Active Volcanoes 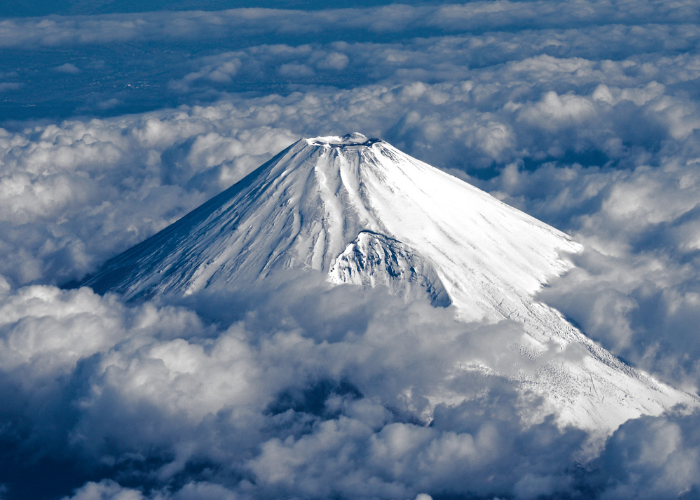 Mount. Fuji is made up of three active volcanoes.

While Mount Fuji looks like an ordinary mountain, it is made up of three active volcanoes. There is the Komitake volcano at the base of Mount Fuji, with the first eruption that occurred about 600,000 years ago. Around 100,000 years ago, the “ko fuji” (or “old Fuji“) would have been superimposed on it, and finally, the “shin fuji” (“new Fuji”) would have formed 10,000 years ago, to make up the mountain we know today. 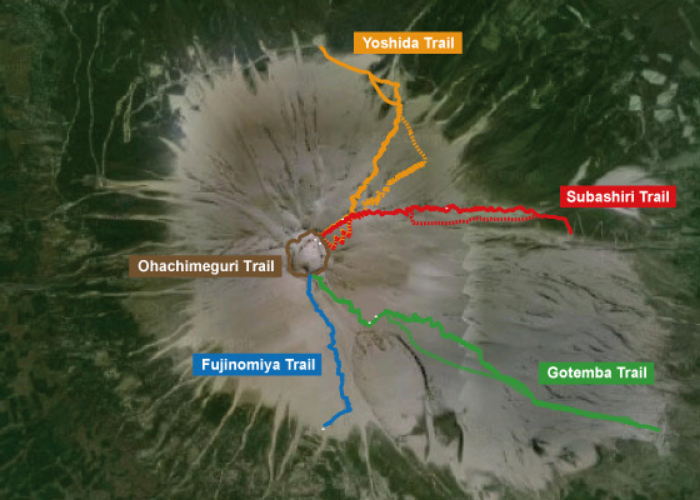 Yoshidaguchi, Subashiri, Gotemba, and Fujinomiya are the four known trails to the summit of Fuji-san. Each of these trails has 10 stations providing climbers with basic rations. Of these four trails, Yoshidaguchi is the most popular among climbers, and the route usually takes between eight to 12 hours to the summit. 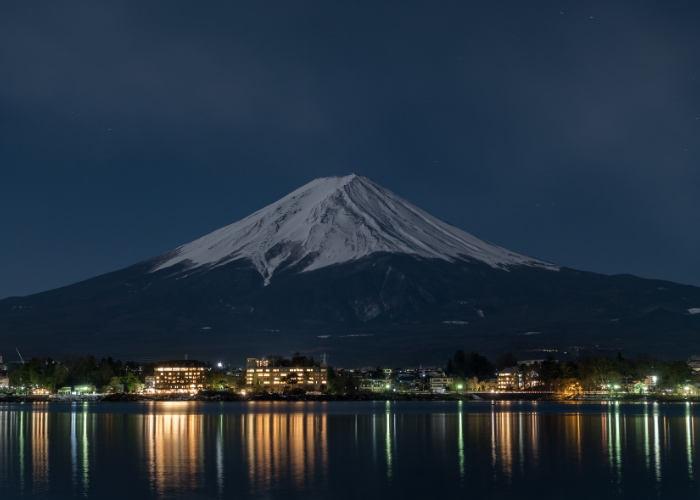 Kawaguchi lake – the best one recommended by the Guidable team!

Kawaguchiko, Yamanakako, Saiko, Motosuko, and Shojiko are the lakes of Fuji-san. These lakes usually give travelers the best spots to view Fuji-san, and of these five, Kawaguchi is the best so far. The others aren’t as developed and as suitable for travelers as Kawaguchi yet. 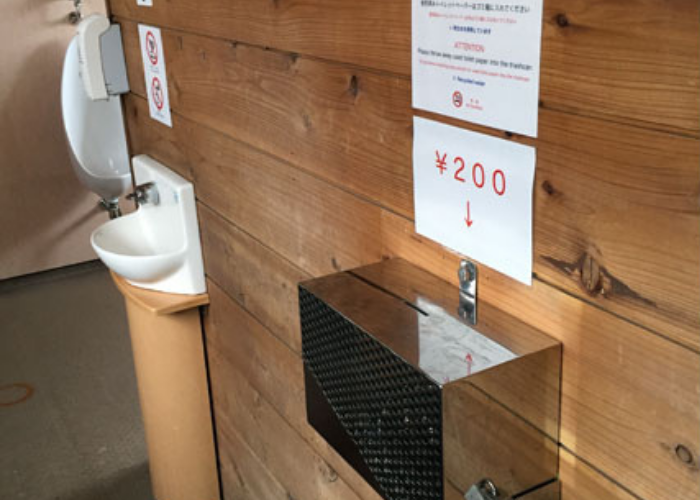 With a 200 yen price, this is the most expensive toilet fee in the world!

The summit of Mount Fuji hosts the highest toilets in Japan, next to a post office! It also has the most expensive toilet fee in the world, located more than 3,700 meters, so don’t forget to carry a few yen just in case!

Do You Know That Fuji Mountain is Privately-owned? 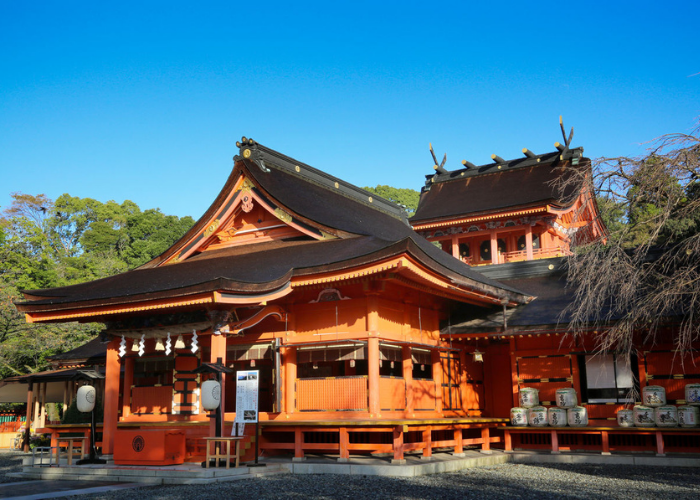 The Hongu Sengen-Taisha Shinto shrine – the highest shrine in Japan and the owner of Mount. Fuji

Fuji-san is private property? This unbelievable statement is true. In 1606, the Fujisan Hongu Sengen-Taisha Shinto shrine, located in Fujinomiya at the foot of Mount Fuji, acquired the top of the mountain from Ieyasu Tokugawa – to whom the mountain belonged. All the land between the 8th station and the summit is considered to be the temple’s property.

Fuji Mountain is An Important Part of Shinto

Fuji-san is a significant place for Shinto’s followers, the main faith in Japan since the 7th century. There are Shinto shrines at the base of the mountain and other parts of Fuji-san.

Fuji’s name is believed to be derived from “Huchi” or “Fuchi,” which are the words for the Aino people’s Goddess of Fire. It was also believed that women weren’t allowed to climb Fuji-san until the 1860s because legend says the Fire Goddess would be jealous of any woman. A chapel called “Nyonin-do” was open for them to wait while the men of the family attempted to climb the mountain. A few years after a foreign woman, Fanny Parkes, completed the ascent in 1867, the Meiji government decided to lift the ban officially. Since 1872 women have been allowed to climb the mountain.

Check out manners and etiquette at Japanese Shinto Shrines HERE!

Don’t miss the opportunity to talk with the locals when you get the chance on your next visit, especially within the vicinity of Fuji-san. Surely, they have a lot more stories to tell about their mountain of worship. You can tell us, too, what other legends and myths have you known and heard about the mysterious Fuji-san?

The Guidable team does hope that you found this article a helpful piece of information! After all, all of our activities are aiming for a better life for foreigners in Japan! So, stay tuned and follow us!