What Do Japanese People Eat For Breakfast? | Guidable

Having a good breakfast to start the day is important as it supplies you with the energy you need for work and helps you focus. What does a Japanese person eat on daily basis and what are the options available for breakfast?

What Do Japanese Eat For Breakfast? 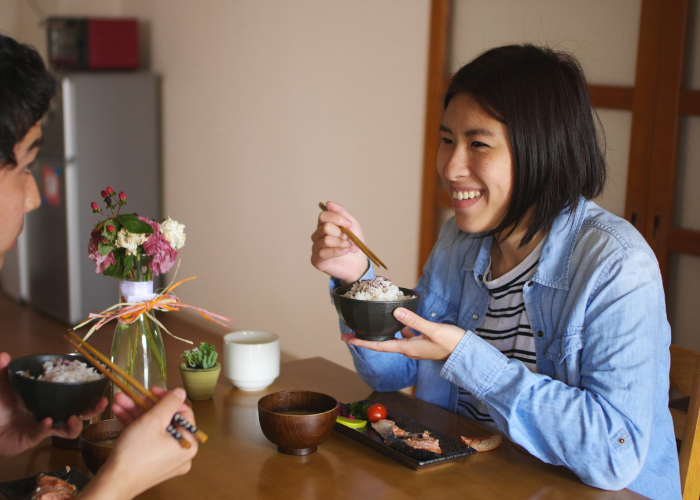 In Japan, a typical Japanese person may have a long morning commute and as such the time they have after waking up is limited. Therefore, the two most important factors dictating the breakfast type is how easy it is to eat and whether it can be eaten quickly. Even with such limited time, most Japanese people believe it is important to have a good breakfast. This provides them with the foundation to start their day, illustrating that a good breakfast is important for your health and prevents you from being hungry later in the day. (which may be embarrassing if your stomach starts to rumble at work…)

Respondents chose what they would usually eat for breakfast, and the results are pretty surprising. 57.1% said they would eat bread, and 47.6% would eat rice. For those who eat bread, it would usually be toast, sandwiches, bakery bread, or convenience store bread – like a curry-pan (curry bread). Those who ate toast,  typically used spreads such as butter or various different kinds of jam. Bread is so popular because it is convenient to eat, fast, and easy to make. For the rice based breakfast goers onigiri (Japanese rice ball) is typically the go to. Otherwise, a bowl of rice with side dishes would be the next choice. 35.9% of the respondents said they would have a soup like miso alongside the rice. After that, 31.0% would have yogurt and 29.4% would have eggs with their breakfast. The final portion of people would eat other foods like cereal or granola. 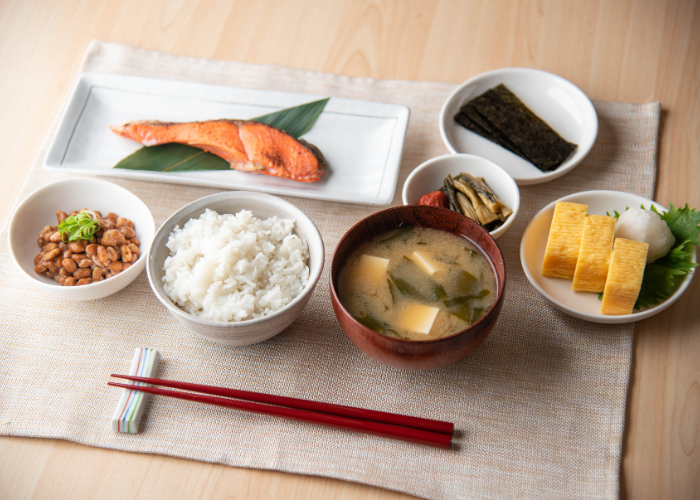 Where do most Japanese people eat breakfast? 49.2% of people said they make their own breakfast at home (as many live on their own). 36.8% would have breakfast made by their family, typically by their mum or wife. As you may see in Japanese anime or TV drama, many housewives wake up early in the morning to make breakfast for their husband and children, as well as prepare bento boxes to take away. This is still very common in many families, but nowadays in Japan there is an increase in woman pursing a career and a decrease in full-time housewives, many families tend to have simpler breakfasts to save time. Only 7.9% of the respondents said they eat breakfast in a restaurant or brought from a store. Most Japanese people would eat breakfast at home rather than at work or school as it is deemed appropriate behaviour to start work once you arrive and may be considered bad manners to do otherwise. If eaten at work, you are not supposed to eat something with a strong smell as you may disturb others in the office. You may wonder, do Japanese actually eat a piece of toast on the way to work or school when they are running late, like in anime? Another research by the same website has found out that unfortunately, 88.1% of the respondents have no experience on running to school with a piece of toast in mouth.

The most important part of a traditional Japanese breakfast is rice, many Japanese would eat rice all day and in every single meal. Japanese would eat rice because it fills you up and so could last you until lunch time. Some Japanese set a timer on their rice cooker the night before to pre-cook the rice so it is ready in the morning. The most traditional Japanese style breakfast would be a bowl of rice served with one or two dishes, but onigiri (Japanese rice balls) are also commonly eaten often pre-made, or store bought. 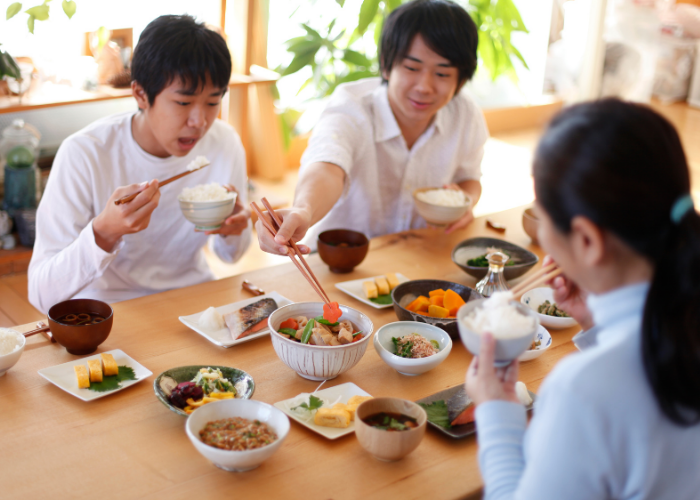 So, what would be eaten alongside the bowl of rice? Many people would have a bowl of soup that could be made from soup bags and instant ingredients like seaweed and tofu. Then, a protein dish is usually eaten alongside. Grilled fish like salmon, or tamagoyaki (grilled egg) are some of the typical dishes. TKG (Tamago Kake Gohan), which is a raw egg topped on a bowl of rice with some soy sauce is as popular as it is delicious and extremely easy to prepare. Side dishes such as pickled carrot or cucumber are also common to be served alongside the rice.

Many Japanese would eat their rice with Natto – which is fermented soybean. Natto is very strong in its smell and taste, sticky and slimy in its texture. It is commonly served with some karashi mustard and soy sauce. Though, it is not liked by some Japanese and many foreigners are not used to it’s overwhelming flavour, it can be bought at most convenience stores and supermarkets in small packages. To eat them, open the packaging and remove the transparent sheet covering the top. Put all the condiments in, and with your chopsticks, mix the natto up by stirring it. Stir it to the desired stickiness and mix it into your bowl of rice! Natto is a great source of plant protein, and also contains a ton of fibre and vitamins, making it a perfect part of a healthy and balanced breakfast. 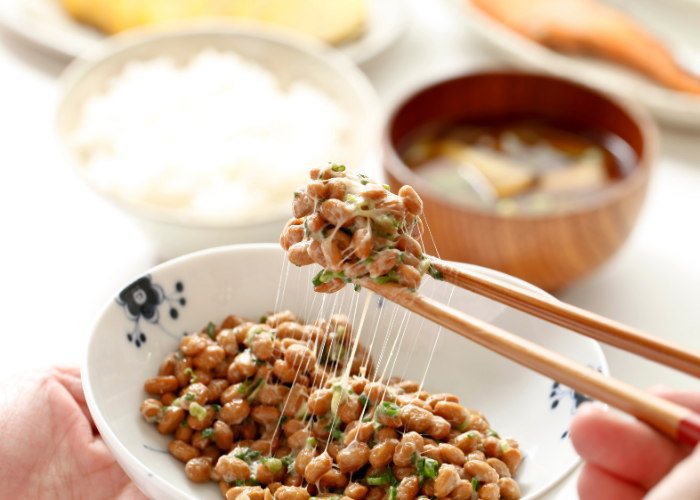 As Western culture spread throughout Japan, breakfast food like bread and yogurt became quite popular. Many Japanese people would eat one or two slices of toast spread with jam or butter along with a portion of protein like eggs (fried or scrambled) or sausages. As a balanced meal is important to Japanese, some also have a small bowl of fresh salad on the side as a source of fibre. For those who eat yogurt, fruits like banana or apple are commonly eaten with it. There is a big range of yogurts available in stores and it is a great source of protein. Coffee is a very common breakfast drink for many Japanese people, and many households have instant coffee. Hot and cold coffee can also be bought from most stores and vending machines. 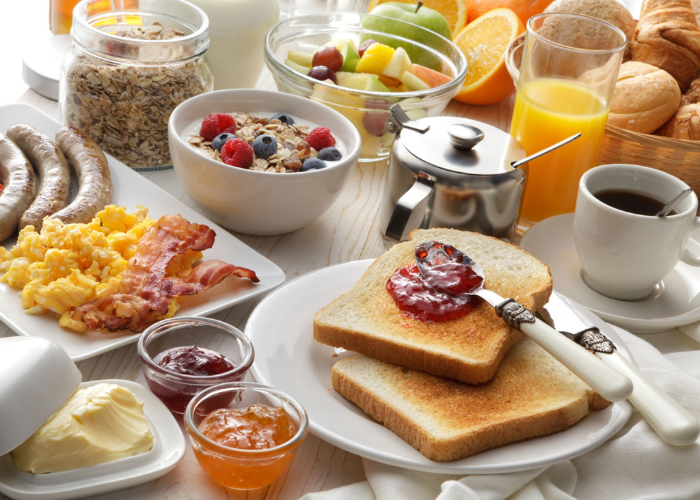 What If I Want to Eat Out For Breakfast?

Although it is less common to eat out for breakfast in Japan, many fast food restaurants serve breakfast in the morning.

If you want Japanese style breakfast, restaurants like Sukiya or Matsuya serve set meals at a price less than 500 Yen. The usual gyu-don (beef bowl rice), grilled fish, TKG (raw egg rice), grilled pork slices etc. are all available for breakfast. All sets would typically come with a bowl of miso soup. 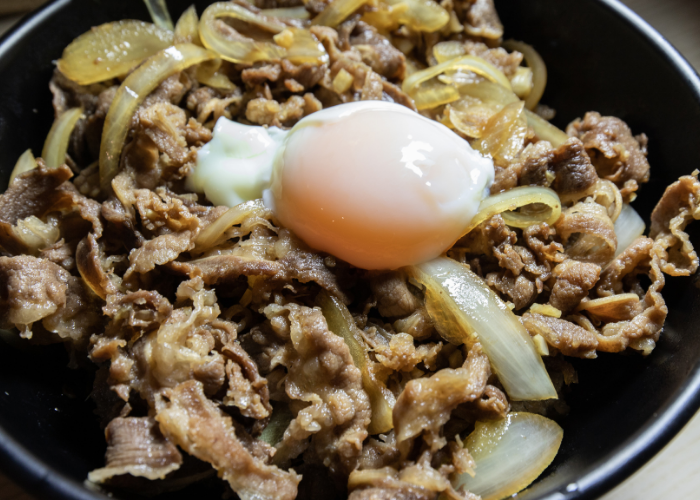 For Western style breakfast, McDonald’s breakfast is pretty popular. In Japan, it is called “asamakku”, which literally means morning McDonald’s. Burgers, pancakes, muffins… the usual McDonald’s breakfast stuff are usually available. Many family restaurants like Lotteria and Jonathan’s would serve breakfast sets with both Japanese and Western styles. Some even have hotcakes and special French toasts in the weekends and holidays. If you want to go for something lighter, cafes like Doutor or Starbucks would be a good choice for a sandwich or a wrap with a cup of coffee. Some Japanese people would also buy onigiri or sandwiches from convenience stores as a cheaper and quick option. In big cities like Tokyo, there are many overseas restaurants now opening in the city centres, brunch foods like pancakes or eggs benedict are now being sold at some restaurants. Although, you have to be ready for long queues as they are often very popular.

What is Your Go-to Breakfast Option?

Regardless of what your breakfast choice is, Japanese people tend to choose ones that are the most convenient to prepare and eat. Other than convenience, nutrients are also one of their biggest concerns when choosing their breakfast as a balanced meal is important to your health.