Why Japanese celebrate Christmas with KFC?

What is your traditional Christmas dinner like? Well, this year it will be KFC and Japanese strawberry shortcake!

Every year, when I start hearing the KFC Christmas version commercial song, I feel that Christmas is coming. I guess some of you have heard the song as well.  It goes “Kurisumasu ga kotoshimo yattekuru（クリスマスが今年もやってくる♪）”

An estimated 3.6 million Japanese families celebrate Christmas with Kentucky Fried Chicken, which has become a nationwide tradition. I actually didn’t know this was the Japanese unique culture until I started living abroad.  You will see long queues outside KFC on Christmas eve to get their special Christmas dinner  ‘Party Barrel’.

Why do Japanese have chicken instead of turkey?  And why are they obsessed with KFC ? Let me tell you the story behind it! 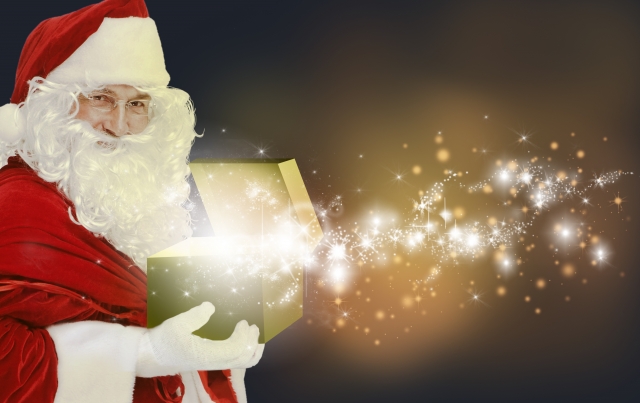 When did Japanese start celebrating Christmas?

Let’s study a bit of history!  It is said that Christmas was introduced to Japan by a missionary, St. Francis Xavier in 1552.  As Edo shogunate (Edo Bakufu) issued a ban on Christianity in 1612 , Christmas disappeared from Japan at the same time. With the revocation of the ban in 1873,  Christmas culture started to spread among the non-Christian people as well.

In 1904, a department store called ‘Meijiya’ in Ginza displayed a big Christmas tree in front of their building and in 1910, ‘Fujiya’ started selling Christmas cakes.

Nowadays Christmas is widely celebrated in Japan but it  is more of a commercial event than religious. For couples, it is a romantic event like Valentine’s day. Usually Christmas Eve is celebrated more than Christmas day itself. 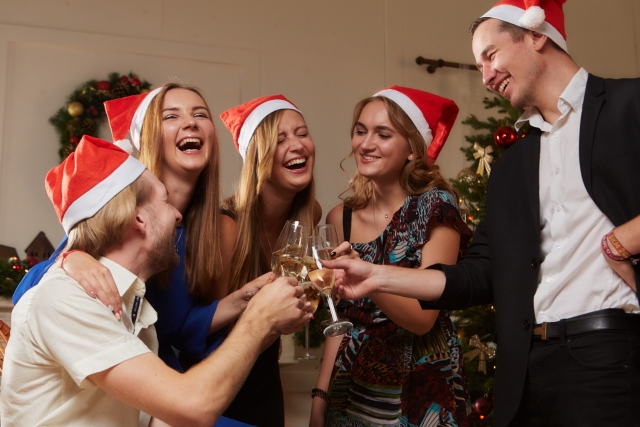 Actually we did try to copy the Western culture of eating turkey on Christmas day until 1970s. However, this didn’t last long as traditionally Japanese didn’t have custom of eating turkey and  it was difficult to get, as well.  So, chicken replaced turkey easily. As you know, Japanese are very good at modifying foreign culture and adopting it!

In 1970s  when Japanese people already accepted chicken as Christmas food, TV  became an essential item in most families.

In 1974, KFC took advantage of this situation, and started a TV commercial to link KFC and Christmas using the slogan ‘ Kentucky for Christmas（クリスマスにはケンタッキー）’ which was obviously very successful!

How did KFC get the idea of Party Barrel?

One day, the first KFC manager in Japan, Mr Okawara overheard a conversation between a couple of foreigners in his store. They were talking about how much they missed eating turkey on Christmas.  This gave him an idea of Party Barrel hoping that fried chicken could be a fine substitute for roasted turkey. 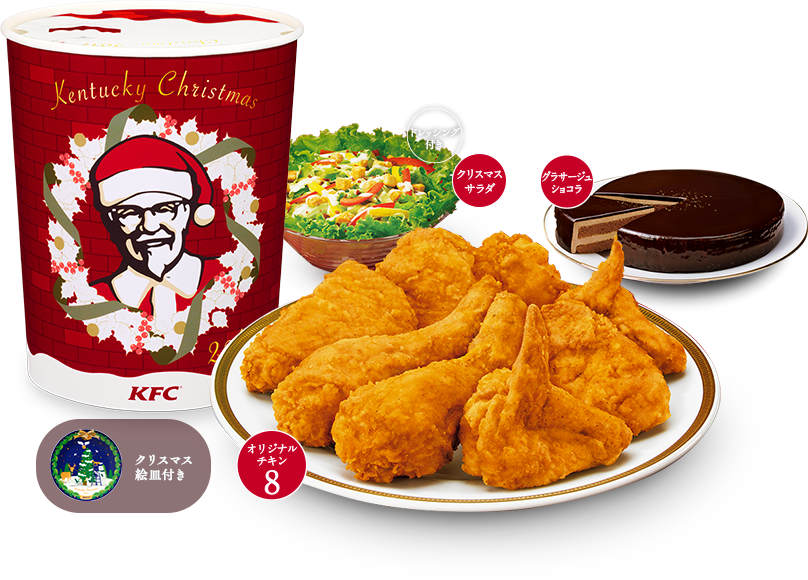 It is quite difficult to buy KFC’s special Christmas dinner on Christmas Eve without booking in advance.  In fact the booking for Christmas 2017 has already started.If you order online by 10th of December, you can get an early booking discount on some items. Most Christmas menus are limited in quantity, so you had better hurry!

KFC’s signature Christmas party set. It comes with the main (chicken) , Christmas cake, salad and some plates all in a cute bucket. Limited in numbers and you can get a discount by booking by 10th of December.

A combination of 3 to 4 kinds of fried chicken. For those who don’t need cakes and salad, this is the one to choose. No early booking discount is available on these items.

The roasted chicken of Japanese premier brand chicken called 『Gokoku aji dori（五穀味鶏）』. There is no early booking discount but they are limited in numbers. Early booking is essential.

Don’t forget about another Must-Have food for Japanese Christmas dinner! Japanese typical Christmas cake is quite different from traditional Western Christmas cake such as Christmas pudding in England and Stollen in Germany, which is more like dried fruit bread. Instead, we have what we call “Christmas decoration cake” which is covered with whipped cream with fresh strawberries on top.  ‘Fujiya’ is known as the first patisserie who started selling Christmas cakes in Japan in 1910. Christmas cakes of the popular shops will sell quickly. To avoid disappointment, try to book your cake at your favourite shop well in advance.

If you are invited to a home party at your Japanese friend’s, why don’t you bring a KFC Party Barrel?  You might think bringing fast food to a Christmas party is rude, but trust me, Japanese people will love it!