Pocky – A Must-Buy Souvenir From Japan

What do you think of first when you hear Japanese snacks?

For me, it is definitely Pocky (Mikado if you are from the Europe).

Yes, that biscuit stick, thin and long, covered in chocolate. It is one of the most popular snack in Japan that is also sold internationally in many countries around the world. I remember the first time I had it was from my friend’s break-time snack back in elementary school, and I just fell in love with that crunchiness with the rich chocolate flavour. It is now still my go-to comfort snack.

However, how much do you know about the story behind Pocky? Let’s find out!

So, What is Pocky? 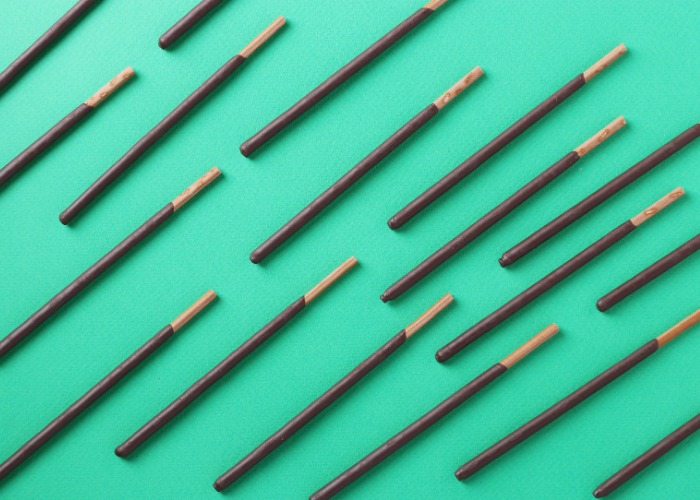 Pocky is a brand of biscuit stick covered in chocolate coating, with its bottom part chocolate-less and exposed with the biscuit part. Pocky is first released in 1966 by the founder of Glico co., Ezaki Glico. The biscuit stick base is like a Pretzel but in thinner, longer shape (which is actually another snack brand by the same company called Pretz). Its most classic packaging and version consist of a rectangular red box with a print of the Pocky sticks and the brand name. The opening is at the front which the lid enables one to close the packaging again after opening, and it usually comes with two packs of biscuits. 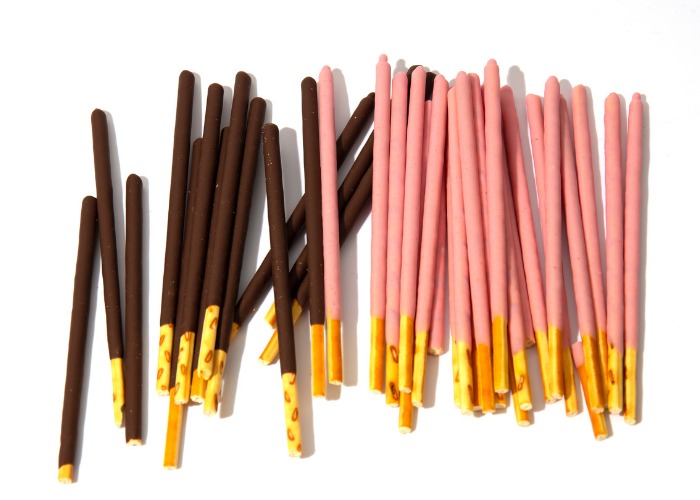 Being one of the most popular snacks in Japan, Pocky is also particularly popular in Asian countries where they are sold in many places like convenience stores. In Malaysia, it was once named “Rocky” because “Pocky” sounds like a swearword in their language, but now it has been changed back to Pocky. Out of Asia, Pocky has expanded its branch into European countries under the name of “Mikado” since 1982. Pocky in different countries have a variety of flavours and texture, which are adjusted and produced to suit the tastes of the people there, and also due to the difference in ingredients. For example, as milk chocolate produced in European countries tend to have a creamier and richer texture, Mikado tends have chocolate that is thicker in its taste.

The Story of Glico Co.

As you may notice on the packaging of a box of Pocky, the name “Glico” is printed on its top left corner. Glico Co. Ltd. is founded by Ezaki Riichi in 1922. Before Ezaki founded Glico Co., he was working as a medic. He investigated and found out that there is a high glycogen content in oyster broth, which he used to treat his son who was sick in bed. Ezaki was inspired and astonished by the benefits glycogen has for health. As a medic he attempted to use glycogen for medicine, but his university’s professor made a point to him that prevention is of more importance than cure in trying to maintain a healthy lifestyle. Ezaki believed it is the children who would need glycogen the most for their growth, and sweets were always the most popular between them. Therefore, Ezaki launched Glico’s first sweet “Glico Caramel” and stated Glico’s (the company) concept to be “Enhance Health Through Food”. In 1992, which was Glico’s 70th company anniversary, they changed their concept to “A Wholesome Life in the Best of Taste” to adopt to the modern society. 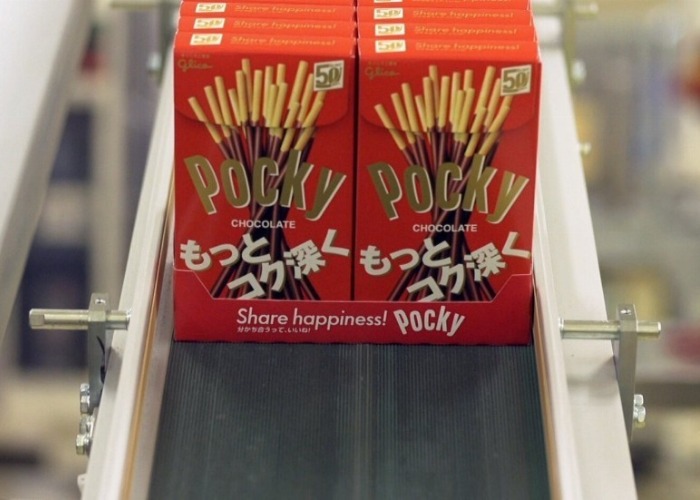 Have you ever been to Osaka? No matter yes or no, you would have probably seen pictures of the “Glico Man”. Located right in the heart of Osaka in Dōtonbori, there stands the billboard of the Glico Man by the canal. It was first placed in that location in 1935, and now it is the 6th generation through renewals. It is now one of the most famous landmarks in Osaka with hundreds of tourists taking photos with the Glico Man sign every day. So, who is the Glico Man? In fact, the Glico Man is not based on any sportsman or figure in real life, but a character designed by Glico Co. It is because for Glico Co.’s first product, the Glico Caramel, each sweet would contain 15.4 kcal which is the amount of calories just enough for a 165cm, 55kg man to finish a run of 300m. Therefore, here is a runner crossing the finish line and posing a winning gesture. This image is also printed on the packaging of the Glico caramel. The design of Glico Man has been through several modifications, with its earliest version prone to criticism of “looking unhealthy” or “nutrients-deficient”.

The Story of Pocky

Pocky was first launched in 1966. Before that, consumers have suggested to put chocolate coating over Pretz, another snack brand of Glico. During that period in Japan, the only chocolate biscuit available in the market were ones imported from America and Europe, which are chunky and relatively big in portion. Therefore, Ezaki thought of this idea of having a rather convenient, portable and lightweight chocolate biscuit to eat on the go, especially targeting young ladies. Therefore, this thin, stick shape biscuit was designed. Originally, it was named “Chocotekku” as “teku teku” is an onomatopoeia in Japanese which means walking, but it had actually been trademarked by another company already. The name “Pocky” actually came from another onomatopoeia of “Pokking”, which is the sound of a biscuit cracking in halves. Only after 2 years after its first launch, Glico made 30 billion Yen of sales out of it, being especially popular among the younger generation. 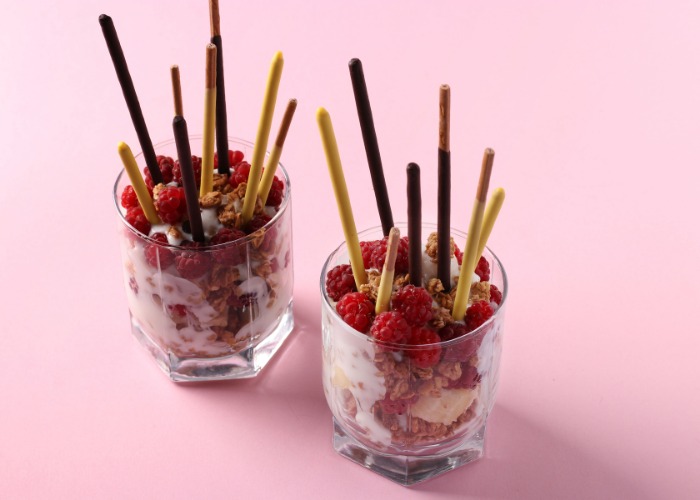 Unlike to the Western chocolate biscuits, Pocky is really distinct in its shape and eating method. As fingertips would be used to pick up the sticks, a layer of chocolate may easily melt and make the hands dirty, as such the lower part of a Pocky stick is then designed to be chocolate-less to avoid this problem, in fact this invention was actually registered as a patent in 1969! There was also an idea to cover the end with a removable foil, but was rejected as it would increase costs and cause inconvenience in the eating process.

The pocky was first manufactured using hand dipping techniques (imagine doing that) before gradually moving into automation as the demand increases. Different flavours were released not long after the chocolate flavour hit the shelves, with Almond and Strawberry launching in 1971 and 1977 respectively.

If you are into Japanese anime, manga or drama, you would find out that Pocky features pretty commonly in Japanese media. It has been very popular among young generations in all periods, bringing a range of trends to the Japanese pop culture.

The 11th of November is the Remembrance Day in Japan but it is also the same time, the Pocky day! It’s actually officially named the “Pocky & Pretz Day” although clearly the people of Japan has completely ignored that.

It is certified as a Memorial Day by the Japan Anniversary Association and is established on 11th of November in 1999, although it may seem unusual with the year ending in 9s, in the Japanese calendar, it is actually the 11th year of the Heisei Eraat the time! (So, it is in fact 11/11/11). On this day, people would give out Pocky to family and friends, but is also like a Valentine’s Day it has also become a tradition  where some people especially students confess their love to whom they like. In South Korea, the 11th of November is also celebrated as the “Pepero Day”, similarly to Pocky, Pepero is a chocolate stick brand from Lotte, and is actually celebrated as an official day in South Korea. 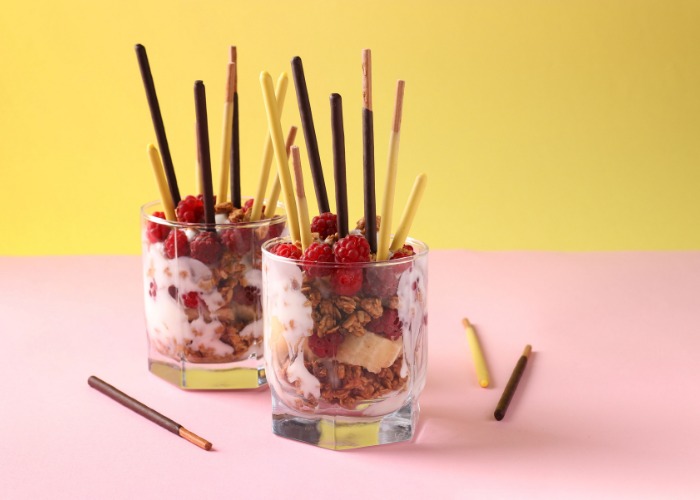 The pocky has more stories to tell! The younger generations in Japan has come out with many creative ways to celebrate the Pocky day. The pocky game is one of the most popular activities that springs up amongst the haystacks, where many have recorded short videos and uploaded to platforms like YouTube and Instagram (also Vines when it still existed).

All you need for the game is 2 people plus one stick of Pocky. The two would each have an opposite end of the Pocky stick in their mouth, and the game starts as both sides start to bite off the Pocky. The game ends when one side retreats or when the stick breaks. The one who managed to bite off the most Pocky would win. The exciting part of the game is when the two opponents’ lips would almost touch at the end as if they would kiss. This is a common game played in parties or social gathering between groups of men and women for the doki-doki (sound of pounding heart) it gives or ice breaking. There are variations of the game, but they all genuinely involves the excitement of the kiss (almost). 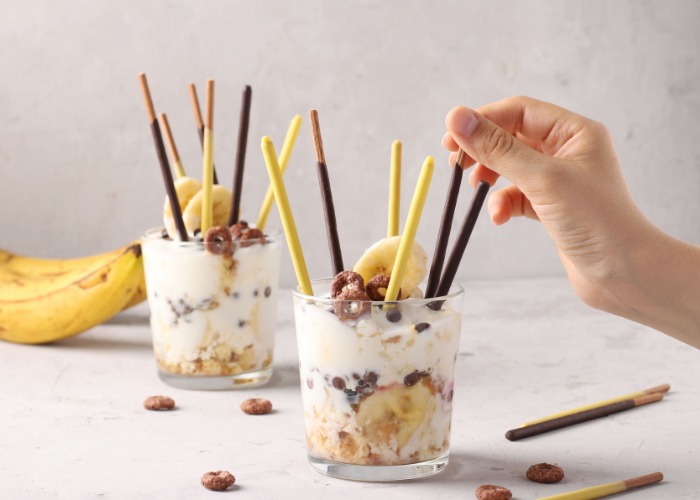 Glico themselves have also launched campaigns on Pocky day to celebrate the day nationally, especially over social media. In 2014, Pocky actually won a Guinness Record of the “Most Mentions of Brand Name on Twitter in 24 hours”, with 1.8 million fans around the world tweeting, breaking the previous record in 2015 with 3.71 million mentions. In 2014, Glico set another Guinness Record of “Largest Online Photo Montage of Cookies/Biscuits” with 16,825 photos of people eating or holding a Pocky or Pretz stick.

What types of Pocky are there?

Well, it is difficult to introduce ALL Pocky products as there are over a hundred flavours of Pocky available around the world. Even within Japan, there are versions which are regional, collaboration or season limited. Pocky varies not only with the flavour, but with the size and texture. Either than the classic chocolate, there are a few other versions which you may come across.

This Pocky pack comes with 50 sticks of extra slim Pocky sticks. The sticks are about a half-way thinner than the classic Pocky stick. 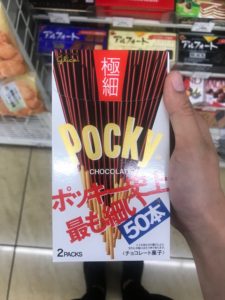 This flavour has a more buttery biscuit base with a richer milk chocolate layer.

Almond Crush are topped with almond bits over the top and covered with a layer or rich milk chocolate. 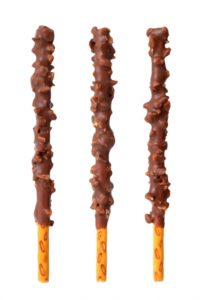 This is a heart shaped biscuit stick covered in strawberry cream with strawberry bits on top. The flavour has a balanced taste of  sweet and sour. 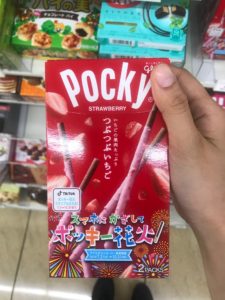 Pocky Midi is very heavy loaded with chocolate, with it taking up 75% of one stick. The milk chocolate is also whipped so it tastes creamier and richer than the usual Pocky, making it melt smoothly in your mouth! 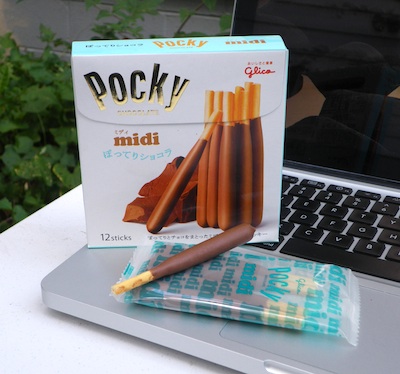 Azuki (Red bean) and Matcha (Green tea) are two versions of Pocky Wagokoro. They adopted flavours of traditional Japanese sweets and has an elegant style to it. With these Pocky(s), it is the biscuit that is flavoured rather than the chocolate. 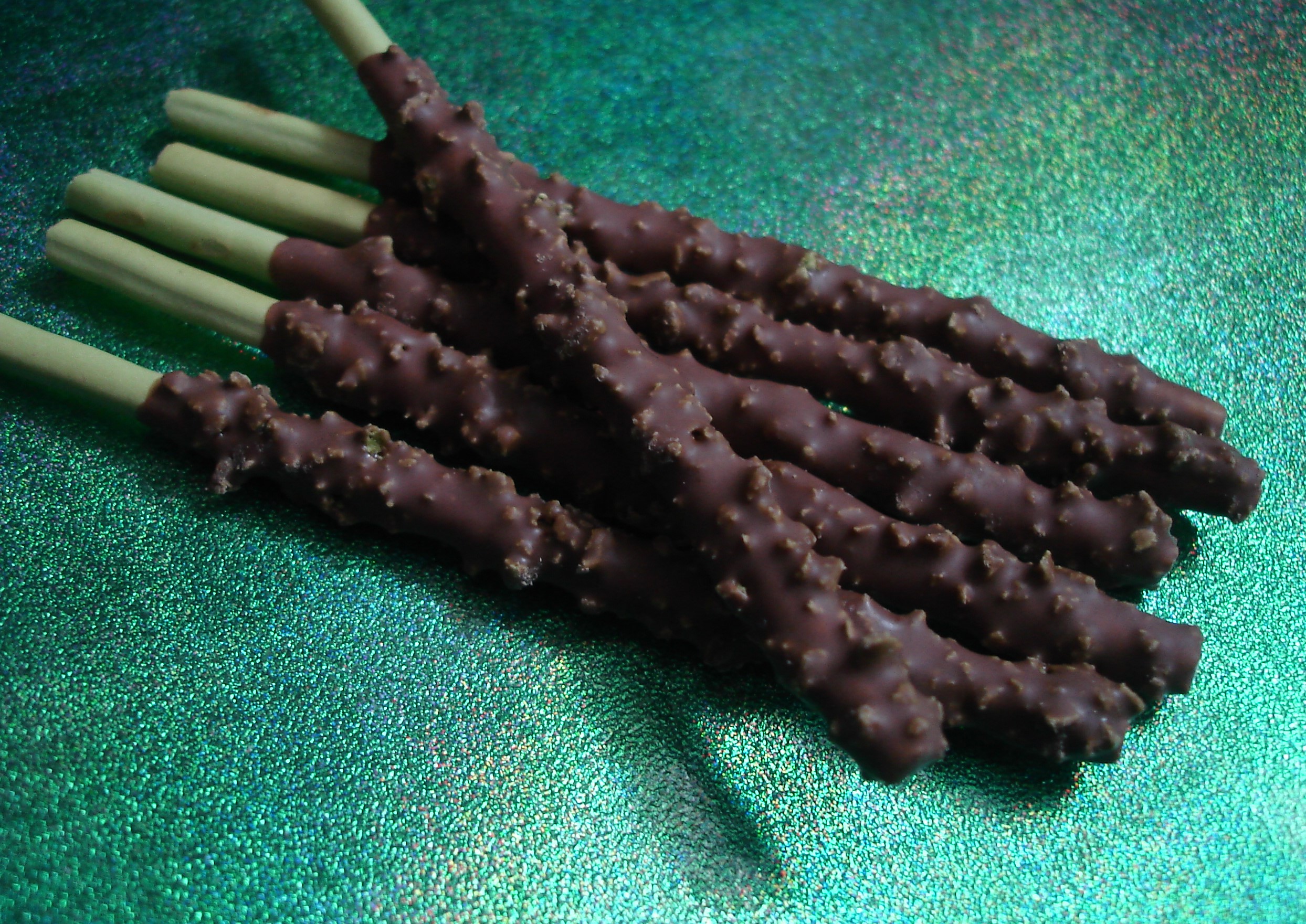 These Pocky(s) are 1.5 times bigger than the classic size. Each pocky stick is also packaged individually, with 15 sticks in total in one pack. They are specifically made in a particular region using the region’s specialities, so you can have a flavour with its best, original taste. They are sold in limited areas so you may have to check if the region sells that specific flavour you want. There are flavours like Shinshu Grape from Nagano, Yubari Melon from Hokkaido, Uji Matcha from Kyoto, and now with the new flavour Amasake (Sweet Sake) from Tokyo!

So, what is your favourite Pocky flavour?

It is so hard to choose one amongst all of them, but I personally prefer either the Almond Crush or Gokuboso flavour!