What’s the best season to visit Japan? This is a general concern for most first-time travelers. Others would say that perhaps the spring season of the sakura cherry blossom is the best, and is definitely one of the most iconic. However, there is another aspect of Japan’s shifting season that should not be ignored.

There are 48 twists and turns on the two roads of Irohazaka. Connecting central Nikko to the mountainous Okunikko region, this scenic strip of road is particularly beautiful in autumn – as can be seen in this shot by @shotabletennis. Absolute madness!! 🎌🍁 • #guidable #guidablejapan #travelphotography #traveljapan #traveltheworld #japantravelblog #japantraveling #nikko #nikkojapan #日本

The viewing of autumn leaves in Japan is called momijigari or koyo. This is a favorite Japanese pastime that attracts tons of tourists every year. However, please keep in mind to practice social distance and wear a mask during the pandemic of the Coronavirus! Protect yourself and the people around you!

Why Is Autumn in Japan So Special?

Starting from mid-September and lasting until December, Japan experiences a very long season of autumn leaf colors – around three months in total. The Japanese maple leaf is known for its deep red color, while other trees parade in shades of yellow, orange, gold, and brown. In certain places, kusamomiji, or autumn grass, adds its fiery red color to the tree line. The weather in Japan is also incredibly pleasant during the autumn season.

The top places in Tokyo and Kyoto recommended by the Guidable Team are listed below! Check out for updates to your favorite spot!

The ginkgo tree (Icho tree) is the official symbol tree of Tokyo, and it surrounds many of the capital’s streets, marking Ginkgo Avenue in Meiji-jingu Gaien Park to be one of the best spots to enjoy autumn in Tokyo. These stately conical trees turn bright yellow at the end of November. 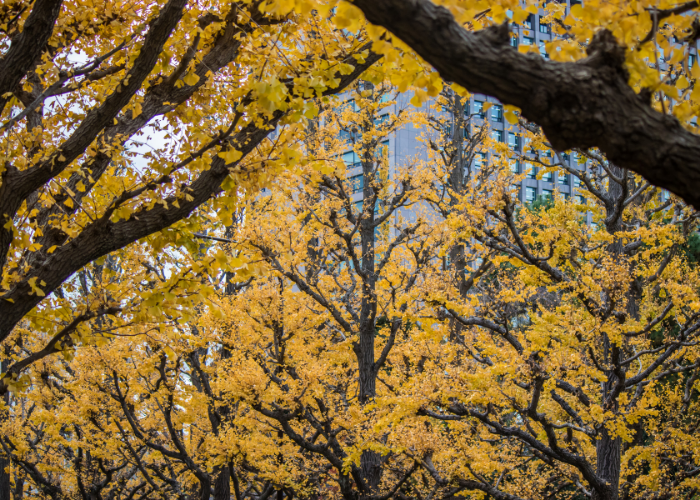 – Access: Only about 700 meters away from Shinanomachi Station on the Chuo-Sobu JR line.

Ueno Park was established nearly 150 years ago and is home covering nearly 9,000 trees. Such a concentration makes it a perfect place for viewing foliage. While there, you may want to visit the museums and shrines of the park. 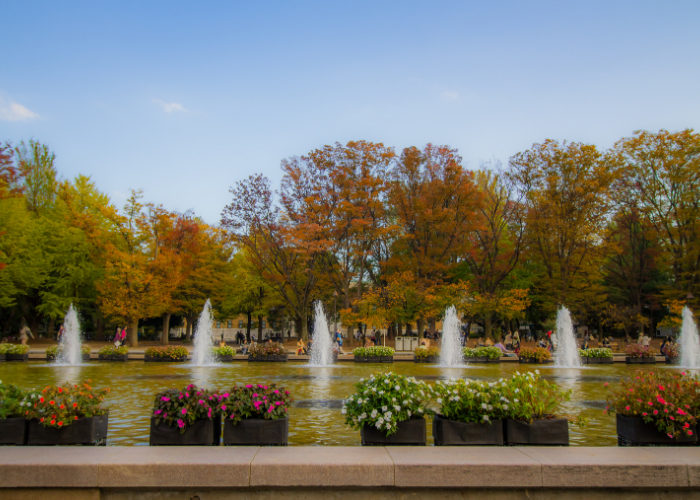 – Access: The park is only 500 meters away from JR Ueno Station

The Rikugi-en is a garden of the Edo era that was established in 1878. It provides a truly remarkable view of koyo – enjoying the colors at night. Trees surrounding the lake are decorated so that they can be enjoyed long after the sun sets, and the lights and leaves reflect mystically on the surface of the lake. This park costs an entrance fee of 300 yen. 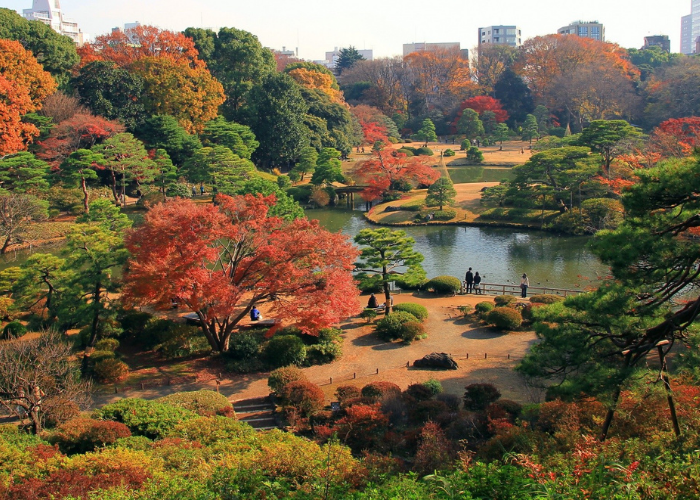 – Access: The park is located 700 meters away from JR Komagome Station.

Located in the northern part of Tokyo, the picnic areas that wind through this park make it a prime location for relaxing koyo viewing. Its landscape is varied, ranging from mountains to grasslands and marshes. Oze is also a remarkable habitat for the grasses of kusamomiji. As you explore the trails, you’ll find yourself in the middle of a golden sea of red swaying fronds. 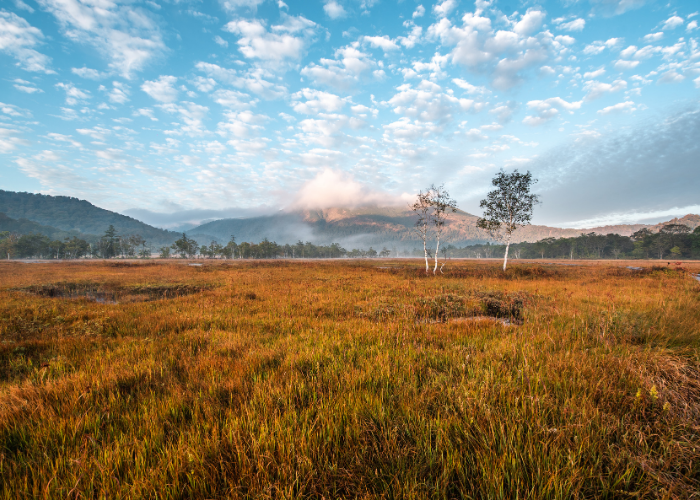 In addition to the vibrant colors of the fall, you can enjoy a cup of green tea in the gardens of the Eikando Temple. The grounds are decorated by light at night to allow nighttime viewing. The temple is located near the Nomura Art Museum and the Nanzen-ji town, as well as the southern end of the Philosopher’s Path. 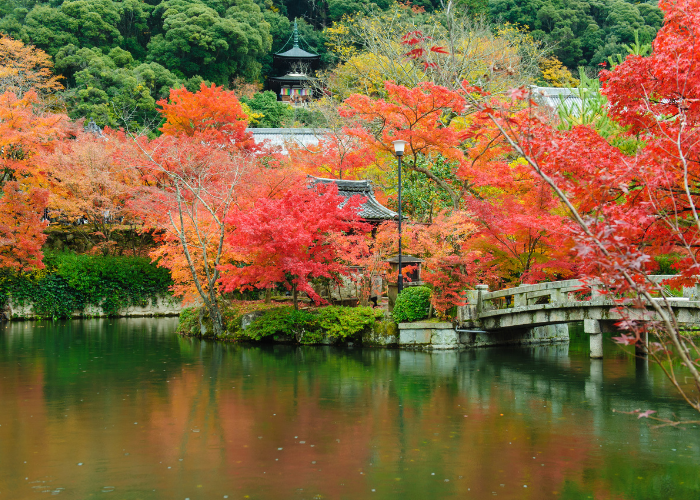 Away from the bustle of Kyoto, Arashiyama provides views of the forested mountains covered with a patchwork of multicolored leaves. You can also take a tour of the temples of Arashiyama and enjoy a romantic ride on the Sagano Scenic train. 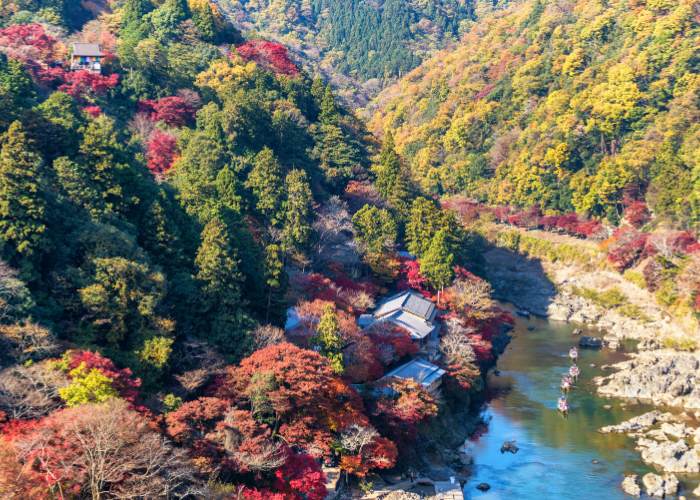 – Access: You can use your Japan Rail Pass from Kyoto Station to reach Arashiyama. Take either JR San-In or JR Sagano Line to Saga-Arashiyama Station. The train trip lasts about 20 minutes.

The Tofukuji Temple is one of the most famous koyo places in Kyoto.

Its trees are shining in orange and red colors. The Tsutenkyo Bridge also offers an impressive view of the grounds of the temple. 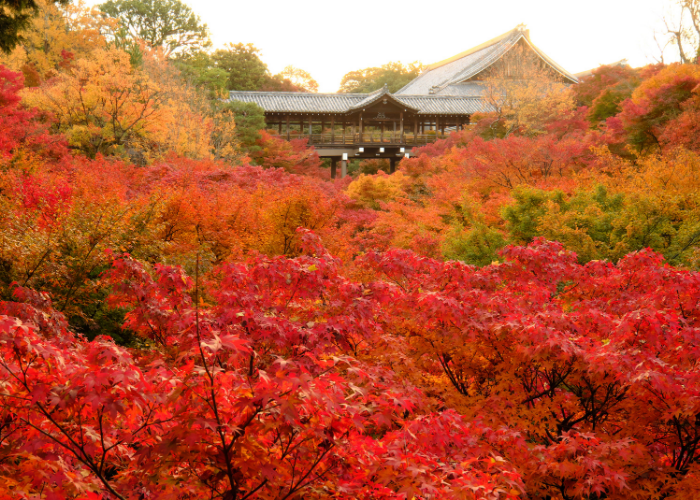 – Access: Take the JR Nara line from Kyoto Station. Tofukuji Station is only one stop away (3 minutes away). The entrance to the temple is just 700 meters away from the station.

Based on weather conditions, the actual appearance of the fall colors can vary from the estimates provided. Fall leaves can start a few days to a few weeks early if the weather is cold, or they can occur late if the weather is unusually warm.