Summer is well on its way, and we’re almost due to swap the wet and dreary rain-filled tsuyu (rainy season) weather for the hot and humid weather that signals summer in Japan.

If you’re looking for the best places to take that perfect summer photo, here’s a list of a few of the best summer spots in Japan and the best times to go!

Located in Shizuoka prefecture and just a couple of hours by train from Tokyo, Hattasan Son-eiji (法多山尊永寺) is the perfect summer photo spot for lovers of pastel colours and the hydrangea flower. The temple is decorated with pastel blue and purple umbrellas and wind chimes in all colours of the rainbow, making it the perfect place for those who love a pastel aesthetic.

Although it may not be as popular as the more well-known ‘Hydrangea Temple’ (Meigetsu-in temple) in Kamakura, that only makes Hattasan Son-ei-ji Temple the perfect place to enjoy the warmer summer weather without the rush of crowds.

Unlike the famous Meigetsu-in temple, however, hattasan son-ei-ji temple is quite isolated, meaning that there is not as much to explore in the surrounding areas.

If you do get hungry, however, there is a cafe inside the temple that prepares traditional Japanese-style lunches and a small cafe in front that offers a variety of drinks and small sweets.

Best time to visit: Throughout June. 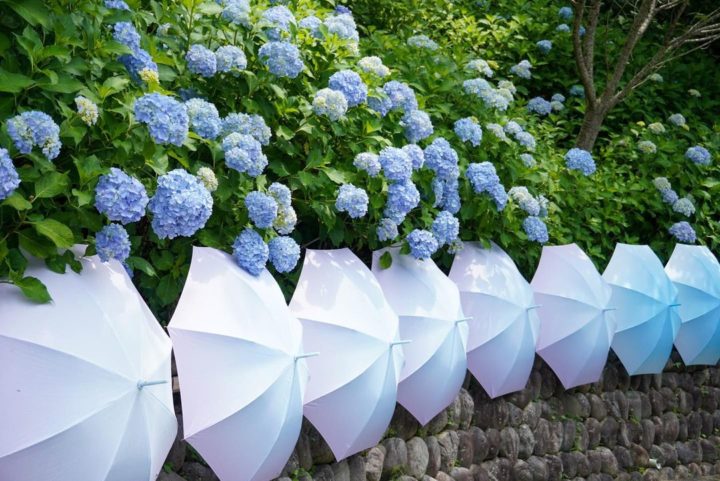 Summer in Japan means sunflowers! Every year, the Showa Memorial Park (昭和記念公園) welcomes thousands of visitors into the park to take a look at the sunflower field that covers 4,000 sq meters and neighbouring flower field.

Showa Memorial Park, which is also the biggest in Tokyo, isn’t just a great summer photo spot, however. Throughout the year, you can watch a huge variety of species bloom throughout the year including sakura and tulips in the spring, sunflowers and hydrangea in the summer, and cosmos flowers and ginkgo trees during the autumn.

If you’re feeling a little peckish after all that walking, head over to the nearby IKEA for some of their delicious meatballs and a slice of Daim cake. 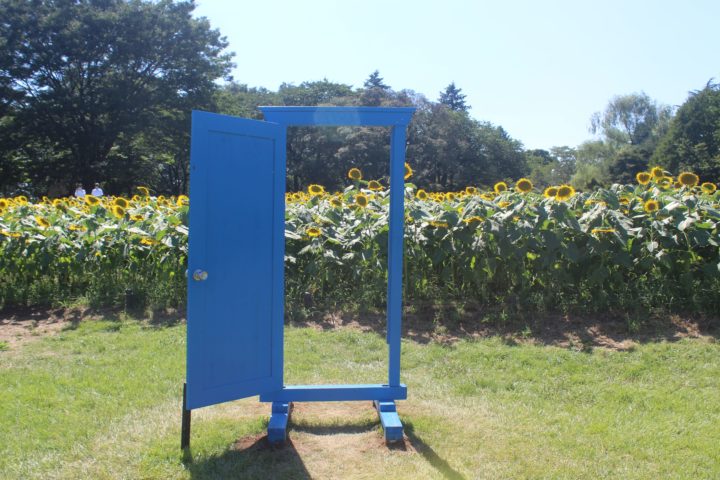 Did you know that there was a pond that looked just like a Monet painting? The pond, which is actually called ‘the pond with no name’ (名前のない池), is filled with turquoise waters, colourful koi fish and blooming water lilies, possibly making it the most beautiful pond in Japan.

Originally used as water storage for the nearby rice fields, in the 1990s, the owner of the neighbouring Itadori Flower Park cleared out the pond and planted water lilies, while the locals brought koi fish to the pond giving rise to this real-life Monet piece.

The pond itself is very small, so it doesn’t require too much time to visit. If you feel you’ve not had enough of the beautiful nature in the surrounding area, why don’t you take the bus to the nearby Koga Shinsuian, where you can collect fresh water from the mountain to take home, before continuing on to Koga Valley?

Best time to visit: Mid-June to Mid-July whilst the water lilies are at their peak. 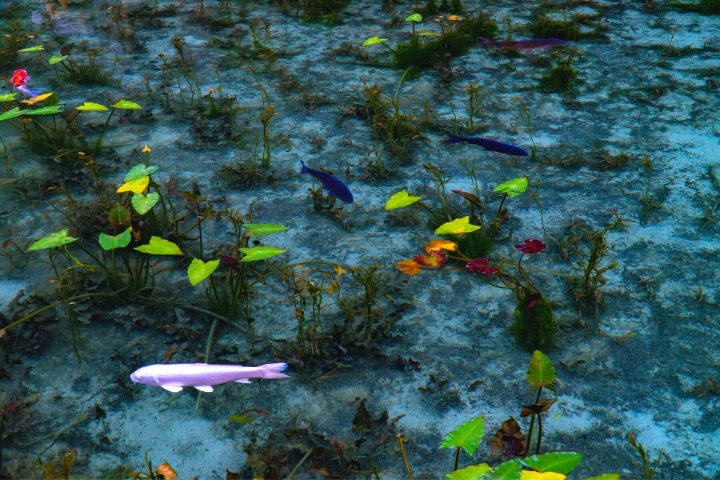 In Japan, summer is the perfect time to see fireflies. Throughout June and July, fireflies can be found around the country in areas with clean water and plenty of nature. The best places to go and see fireflies are away from the bright lights of the city, where the glow of the fireflies gets drowned out by the light pollution.

One of the best places to do so in Japan is Uchio Shrine (jp only). Located deep in the mountains of Tamba, Hyogo prefecture, Uchio Shrine is famed for its beautiful firefly-lit night scenery during the summer. The shrine is home to Hime fireflies that light up the night sky and make for the perfect summer photo.

If you want to spend the day in Hyogo, you could start the day off at Takeda Castle Ruins, which have been nicknamed “Japan’s Macchu Picchu”, before heading east to Kogenji Temple—a close to thousand-year-old temple hidden in the mountains of Tamba. However, since Hyogo doesn’t have many train routes outside of the areas surrounding Kobe and Himeji, you may need a car to move around. 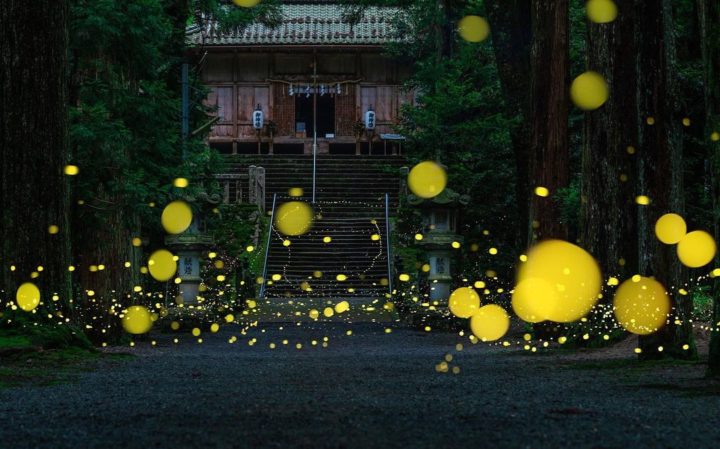 Naoshima Island in Kagawa prefecture is the perfect summer spot for lovers of everything art. Once an unassuming island, not unlike many of the other islands surrounding mainland Japan, Naoshima was transformed by the installation of a single piece of art—one of Yayoi Kusama’s iconic pumpkins.

Since then, the island has been transformed into an art haven where art and landscape are almost indistinguishable.

If you’re looking for a unique place to take summer photos in Japan, Naoshima is it. During the summer, the vibrant blues of the sea and sky make the rich greens of the island even brighter, providing the perfect summery backdrop to the island’s beautiful art installations.

While you’re there, why not explore one of the ten art museums and galleries that fill the island or try island hopping to the nearby Teshima and Inujima, which have also been transformed by art?

Best time to visit: Year-round (Naoshima’s weather is mild year-round; however, it’s best to visit while the sun is out and it’s not too hot in the late spring and early summer). 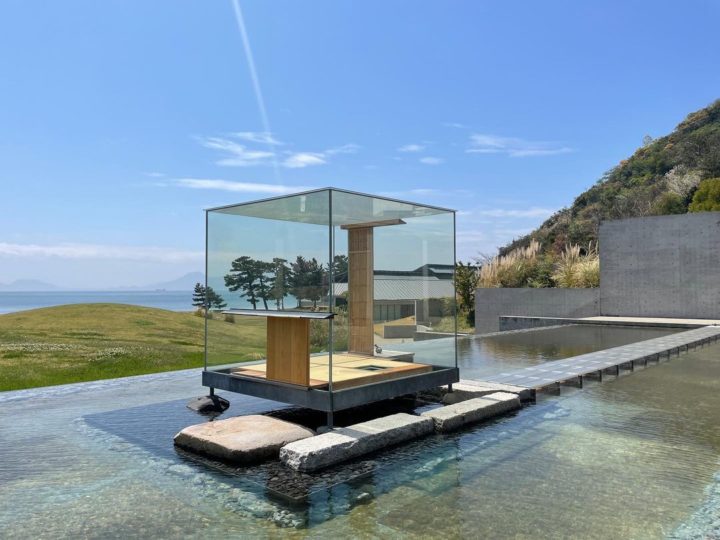 Twenty-Four Eyes (二十四の瞳) is a 1954 film directed by Japanese director Keisuke Kinoshita and based on the eponymous book by Sakae Tsuboi. Following the life of a teacher during the rise and fall of Japanese nationalism and spanning 1928 to 1946, the film—which is notable for its anti-war themes—won several awards, including a Henrietta Award at the 5th Annual World Film Favorite Festival.

The film set, a schoolhouse built in 1902, was converted into a museum following its closure in 1971. Visitors to the set are transported back in time by the old Taisho-era (1912-1926) classrooms and Showa-era (1926-1989) lunches available in the cafe. Once you’ve taken a look around the old school and experienced the nostalgia of one of the school-style lunches, why not try exploring the village in a rental kimono, so you really fit the part!

If you want to explore more of the island, check out Kankakei Gorge, the Soy Sauce Village, or one of the four yokai (妖怪, Japanese ghost) museums!

Best time to visit: Year-round (the weather is mild year-round; however, it’s best to visit while the sun is out and it’s not too hot in the late spring and early summer). 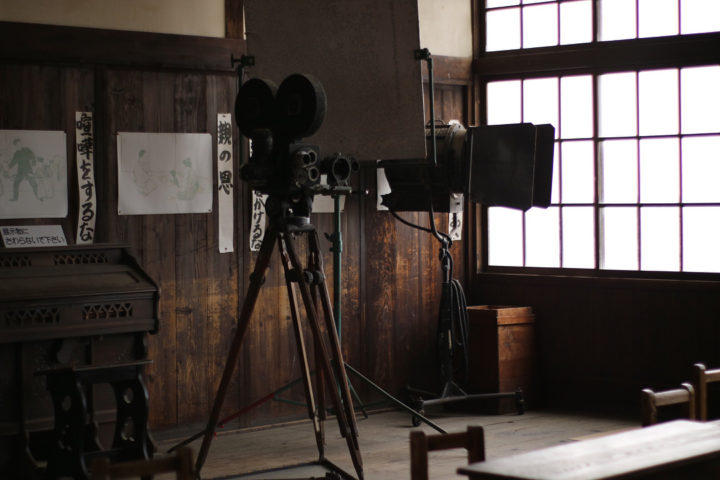 In Japan, summer is a time for exploration and adventure. Make the most of the beautiful weather and add some bright and vibrant photos to your collection!