Umbrellas in Japan: Key things YOU need to know | Guidable

Umbrellas in Japan: Key things YOU need to know

If you have walked the streets of Japan during the tsuyu, 梅雨 (rainy season), then you will have undoubtedly seen a mismatched horde of clear, plastic kasa (umbrella), that hovers over the heads of Japan’s people like an overprotective brother. Protecting them from the dastardly deluge from above.

The sight of Japan’s plastic, see-through umbrellas has become ubiquitous with rain within the country and they are synonymous with each other. Almost every Japanese citizen has owned an umbrella of this style at some point in their life. Japan has the highest number of umbrellas per capita in the world at 3.3, the world average is 2.4, according to a study done by the Global Umbrella Study. This links with the Japanese’s tendencies of checking the weather more than any other country in the world, at 3.4 times per person per day, significantly more than the world average at 2.3 times a day per person.

It seems that the people of Japan are prepared for the nuisances that the humid climate they live in brings and will try to avoid the inconvenience of suffering the consequences of rain and getting soaked.

Japan is consistently ranked as the 45th wettest country in the world, with 1,688 mm rainfall on average per year. Although, despite having some incredibly precipitation heavy areas and seasons, there is a lot of variation in the climate and areas of Japan. Meaning, some areas receive incredibly dense precipitation such as the coastal prefectures on the eastern seaboard while some of the prefectures in Hokkaido, like Okhotsk receive as little as 750 mm per year. 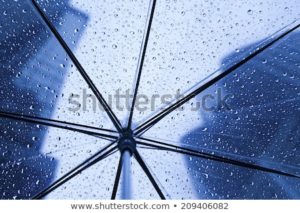 Japan overall sees the most rainfall during the summer months, a period of time call Tsuyu, 梅雨, that lasts from early June to mid-July for most of the country, with there being slight regional variations such as it arriving a month earlier in Okinawa to the south, and Hokkaido not feeling the effects of tsuyu at all.

Tsuyu is a Chinese term that translates to “plum rain”, as it was during this season of the year that the plums would turn yellow and fall at the south banks of the Yangtze, and it was also a historical belief that the plums would then evaporate and the plant turns into rain which would be the cause of the rainy season.

The rainy season of east Asia is caused by a east-west zone of disturbed weather during spring. This front stretches from the east coast of China towards Taiwan and Okinawa, it then shifts north and eastward into the southern peninsula of South Korea and Japan.

The weather front forms when the moist air over the Pacific meets the cooler continental air masses. The front and the formation of frontal depressions along it bring precipitation to most of east Asia. As the front moves back and forth depending on the strength of cool and warm air masses, there is often prolonged precipitation and sometimes flooding in countries such as Japan and China.

It is during the month of June that Japan receives the highest amount of rainfall at nearly 200 mm average monthly precipitation, the next highest month of rainfall is during September and October which is another rainy season called the Sazanka Tsuyu, meaning the “rainy season of the Camellia” on account of the timing of the blossoming of the seasonal flower of the same name.

With global climate change not seeming to be stopping anytime soon, more and more bouts of what have been called “Guerrilla rain” seem to be on the horizon for Japan. Short and intense events of rainfall across the country that can stop as quickly as they appeared.

Japan has had a long and varied history with kasa. Umbrellas were first developed in the 8th century and the Japanese-style folding umbrella was made during the 16th century. In years past it was just used for aristocrats but it since became a daily item for the populace in the 17th century. 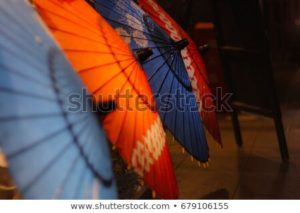 It was during the Edo Period that umbrellas became props for Kabuki (Japanese dance and tea ceremony) and formed into an important part of Japanese culture. It was here that the artistic aspects of umbrellas were pursued as well as their more practical applications.

It was only in the early 1880s that the Western-style umbrella was brought to Japan from the U.K., but their mass production for use by the general populace of Japan did not begin until after the Meiji Restoration in the late 19th century.

In the present today, most of the signature plastic Japanese umbrellas are mass-produced in neighbouring China and then shipped over to Japan for their use.

The Most Stolen Item

Japan has gained a reputation for being one of the safest countries on the planet, with some of the safest cities in the world especially compared to cities of comparable size in other countries. It is common to have your dropped items returned to you or lost items eventually make their way back to their owner.

It can come as a surprise to many, even those who live in the country, that there is a massive crime epidemic in Japan! A crime epidemic involving umbrellas! The plastic, see-through umbrellas are Japan’s most stolen item! 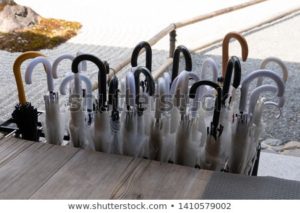 It can come to a surprise and shock to many people if they leave their umbrella in the stand outside 7-eleven to get a drink, only to return not even 2 minutes later and be the victim of the most heinous of crimes – umbrella theft.

With the greatest number of umbrellas per head in the world you would think that the people of Japan would not have to resort to stealing umbrellas to make do. However, it seems that as more umbrellas are introduced into the system the rates of umbrella thievery does not decrease but rather increases. Possibly due to more and more instances of guerrilla rain in Japan.

While many people would just brush aside the cases of umbrella thievery as accidents, a mere mistake, especially since nearly all umbrellas look identical when stored in the containers outside shops and buildings. It is the complete commonality of the occurrence and the rates that it occurs which makes me believe that nearly all of these thefts are voluntary and pre-meditated.

There are some believers within the umbrella community of Japan that umbrellas should be of communal use and that an idle umbrella is for the free use of anyone. That umbrellas are a loan that you return to the next stand at the next possible moment to be returned to the global network of communal umbrellas of Japan. 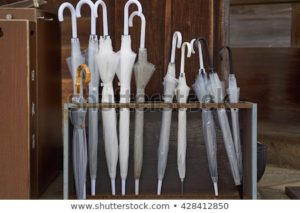 However, if only a few people are following this code of honour then someone is going to end up with their umbrella stolen with no replacement. A predicament no one wants to be in when it is raining heavily.

There is also the issue of people using this ‘system’ to ‘promote’ their umbrellas and slowly gain better and more expensive umbrellas without feeling guilty about it as they are simply working with the community of umbrella users.

In response to this wave of crime that has steadily risen in Japan, many of its residents have begun to fight back and work to battle the army of unknown umbrella stealers.

One popular scheme that people have begun implementing is to write the kanji for curses upon the umbrella to try and ward off the would-be robbers. There have been a whole array of different curses and wording that imply stealing this umbrella will place a curse upon the stealer.

Some enterprising artists have even begun drawing creepy and scary looking faces on the handles to try and repulse anyone who would want to steal the umbrella.

One clever umbrella owner placed a fake tracking chip on the handle of the umbrella and wrote “umbrella tracker” next to it, as an extra way to try and deter any thieves. 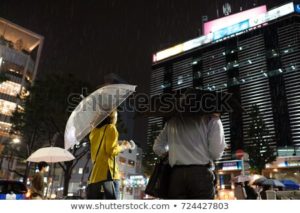 While many of you my think that these plots and plans are trivially useless and would not work as a deterrent to stop thievery. When sitting amongst numerous identical looking umbrellas in a stand, making sure your umbrella stands out from the crowd and looks unattractive to any potential thieves is half the battle won. You want your umbrella to stand out and look silly, as the more conspicuous the more difficult it is for a thief to bring themselves to take it.

A Nation of Rain

Wherever you are in Japan you will no-doubt have experience with umbrellas, whether they be clear or colourful, plastic or fabric, western or Asian, for rain or for sun, umbrellas are part of the nation’s identity and provide a deep look into the psyche of the Japanese culture.

It is important to have an umbrella in Japan, especially during the summer months, when the rain can turn on and off like a flickering light. With almost hourly downpours that can occur at any time an umbrella is an essential piece of equipment for those living in Japan.

Just please make sure not to steal anyone else’s umbrella, we are all trying to stay dry after all.