Winter Essentials in Japan: Warm Up Under the Kotatsu | Guidable

Winter Essentials in Japan: Warm Up Under the Kotatsu

Japanese houses are not usually provided with a central heating system. Thin walls, paper sliding doors are very useful to keep the house fresh in the hot humid summer. But for this reason, the temperature can drop significantly indoors during winter when Japan can still gets pretty cold even in the central Kanto area where the climate is not too severe. Kotatsu, written with the kanji of torch and foot warmer, becomes extremely useful from November to March and can definitely improve the quality of the time spent at home.

But what is exactly a kotatsu? It is a low table underneath which heather is attached and it is then covered by a futon on top. The heavy blanket that falls on all four sides prevents the heat from escaping too quickly creating a nice and warm environment under the table helping heat up the whole body while sitting underneath it.

The Origin of Kotatsu

To understand how kotatsu came to be, we need to go back in history a little.

Before AC, traditional Japanese houses were built around a central area of the house called irori and we could think of it as a sort of fireplace. Irori consisted of a pit in the floor lined with stones where a fire was lit that was used as a cooking area and heating system for the entire building.

From irori then, the fire was replaced with charcoal, a table-like structure was put on top and a cotton futon was used to retain the heath underneath: that is how “horikotatsu“ was born and it seemed to have appeared in Japanese households as early as the 14th century.

The only downside of this otherwise brilliant idea was that it was fixed in one place (where the irori was) and it could not have been used to heat the other rooms of the house.

When the thought of being able to move the kotatsu around the different rooms came up, the “okigotatsu” made its appearance and the Japanese never let it go. This first okigotatsu is essentially the same one we have kept using until modern days. 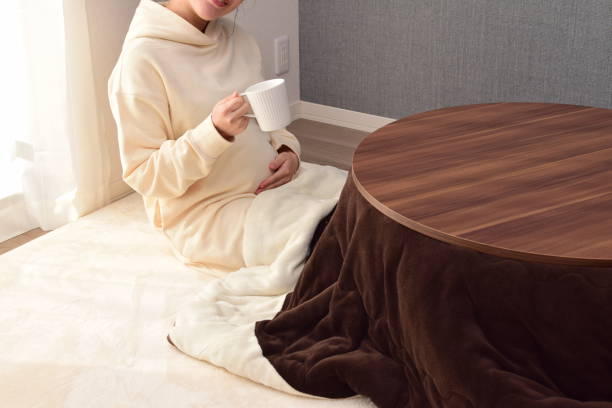 Kotatsu has progressively abandoned the use of charcoal and today is electric, and comes in different sizes and shapes, from small single-use to family-sized ones.

While kotatsu still has a vital role in keeping us warm, it is also becoming an integral part of the interior design of a house as an important piece of furniture, so it is not rare to find round-shaped kotatsu, and designer ones in less traditional materials and shapes.

On the market nowadays we can find a wide variety of kotatsu: kotatsu with storage space – very crucial especially in small Japanese one-room apartments; too bothersome to find the perfect blanket to put underneath? Opt for a kotatsu with a built-in blanket.

During the last two years, with the rapid increase of the people working from home or simply just spending more time inside, kotatsu equipped with USB ports have also started appearing on the market.

If we still couldn’t convince you that having a kotatsu is the best choice in winter in Japan, let’s consider the energy expenditure. A kotatsu can consume roughly ⅕ of the energy used by a heating unit and therefore if used for a prolonged time it can add up and result in considerable savings in your monthly energy bills.

Even though kotatsu has evolved with time, it still represents the center of a Japanese house during winter, around which a family reunites while watching TV, eating nabe, reading and sipping tea to warm up and relax.