How to become a Millionaire in Japan! | Guidable

How to become a Millionaire in Japan!

Are you living in Japan? planning on it? Anyways, you are not a person who dislikes money, are you? Would you like to know how to get million dollars here?  In Japan, there are so many lotteries where people could get up to 1 billion Japanese yen with great luck! Let me make it clear before the dream starts, unfortunately, the ratio of return 46 %, is not so high in Japan as compared to countries like the United States, China, and Dubai, where it stands at 61 %, 65 %, and 72 %. However, as a foreigner, you could purchase them without any trouble, nor are you obliged to pay any taxes in Japan when getting a jackpot. If you would transfer the winning prize to your country or bring them back home, you have to follow the law there. For example, people may have to pay around 30 % tax in the United States.

Just as the title mentioned, I’ll introduce you what lotteries are available in Japan and how and when you could get them to become a millionaire in Japan.

Mainly the following 5 lotteries have been sold in Japan.

There are many basic Japanese lotteries in Japan that are sold occasionally nationwide or area by area. The first prize ranges from 1 million yen to 250 million yen and the selling price is between 100 – 500 yen/lottery depending on the lottery. Of course, you could buy only one lottery. The numbers are assigned from 001-100000 to 100-199999, which transfers into totally 10,000,000 lotteries. The possibility of the first prize is roughly between 1/1M and 1/10M depending on an amount of the first prize. You could at least get the same amount of the price per lottery if you purchase 10 lotteries without choosing them randomly. This means, if you purchase ten 200-yen lottery with 2,000 yen, you could get 200 yen back at least.

Jumbo lotteries are sold periodically, 5 times/year. The first prize is between 100 and 700 million yen and the selling price is usually 300 yen/lottery. The possibility of winning the first prize is mostly 1/10M. Same as the basic Japanese lotteries, you could get at least 300 yen if you purchase 10 lotteries without choosing randomly.

You could immediately find out if you win or not by scratching the lottery right after purchasing. Usually, the selling price is 200 yen/lottery and the first prize is between about 100,000 yen and 10,000,000 yen. These lotteries are sold on a daily basis.

You might not be able to get any money back for all Lottos and Numbers different from “Basic Japanese Lottery” and “Jumbo Lottery” even if you purchase 10 shares as the possibility of Lotto 7, for example, to get more than 1,000 yen, that is the lowest prize, is 1/25.

Please be careful that the expiration date of all winning lotteries should be one year after the drawings. 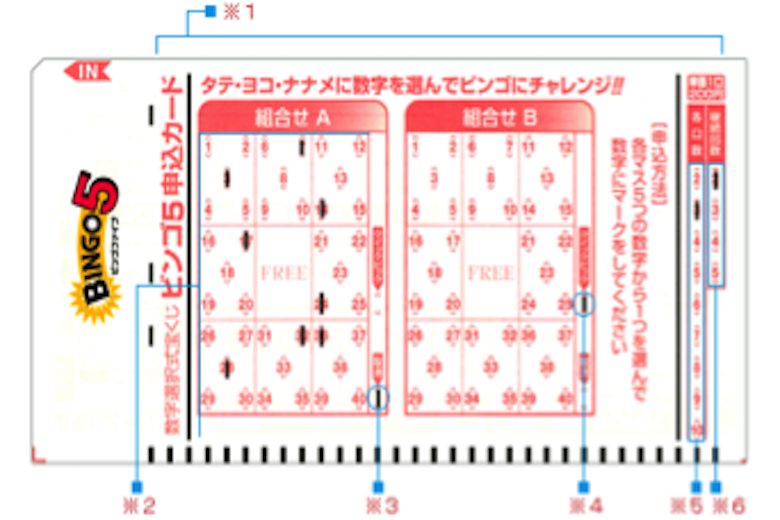 Recently, a new lottery called BINGO 5 has been started to be sold. This lottery is a little bit complicated. You should choose one number each from eight boxes. (The center box is a free as the same as Bingo!). For example, you should choose one number out of 1 – 5 from the left box on the first row, one number from 6 – 11 from the middle box on the first row….until you pick one number each from eight boxes. When you get all 8 lines with those 8 numbers, you could win the first prize. The possible amount of the prize is just over 5 million yen. The winning possibility is about 1/400,000. You could purchase up to 10 shares and 5 continuous lotteries with your same selections. This BINGO 5 is drawn on every Wednesday.

Where does the dream start?/ Where to buy?

Even though the winning possibility of these lotteries should be the same all over in Japan, some people have been purchasing at the special spots called “Lucky Center”. The most famous one is “Nishi-Ginza-Chance-Center” in Tokyo, there are many such lucky spots in Japan that you could check online which spot locates near to your place.

As I mentioned, you might be able to be a millionaire if you were lucky enough. Would you like to try it? Then, if you would get the jackpot, please send me only 1 % of your earnings as my consultation fees although I would cover none of you paid, ha, ha! Gooooooood luck!!

I came to japan last april and i always buy a lotto but my lucky is not yet come. I hope before the year 2017 end my lucky will come. How to select a good lotto number? Thank you.