So the Rugby World Cup is being held in Japan this September, and this apparently is the first time this tournament has been held in Asia. This tournament is similar to FIFA’s Soccer World Cup, held every four years. This is a relatively new international tournament, having started in 1987.

From a review of WIKI, mostly Commonwealth countries, such as England, New Zealand, Australia, and Wales (incidentally, the countries where rugby is a popular sport) dominate this tournament. On rainy days when I am forced to run at my gym and not outside, I sometimes catch Japanese rugby games on television, and generally speaking, most rugby squads in Japan tend to be college teams (bukatsu), so I suspect the rugby level in this country is, like its soccer proficiency, still lacking behind many of the powerhouses. The tournament will be held from September 20th to November 2nd, and will be held in many venues across the country. Where can you see these matches?

Let’s get into it.

The Rugby Match Venues in Japan 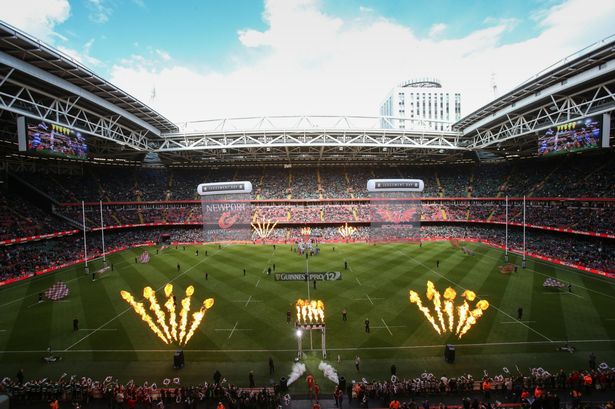 History of Rugby in Japan 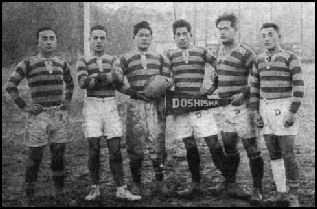 According to my research, rugby was first played in Japan around 1866, during the Meiji era. The Japanese National Rugby Team, known as the Brave Blossoms, first played internationally in 1932, against Canada, and this team has beaten powerhouses such as Scotland and Wales, this latter victory quite recently (2013). From its humble beginnings, by the early Showa Era (before World War Two), members of the Japanese Imperial Family were rugby enthusiasts, though with the outbreak of the war, this enthusiasm was frowned upon because rugby is a western sport (also during this time, western food and anything western were frowned upon). After the war, the rugby scene in Japan quickly rebounded, and the Japanese National Team has participated in every Rugby World Cup since 1987 and participates in regional (Asian) rugby tournaments.

Where Can You Watch the Matches? 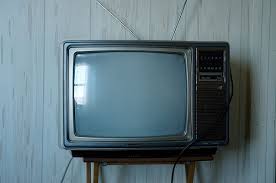 According to my research, the following have the broadcast rights for this tournament: France-TF1, Republic of Ireland-eir Sport, Japan-IGPS (Nippon TV, NHK, and J Sports), New Zealand-Spark New Zealand, United Kingdom0ITV, and the United States-NBC Universal (NBS Sports). Most of these official broadcasters provide live-streaming services and mobile apps you can get from their sites so that you can enjoy the matches on your various devices. As for watching on television, in Japan, all matches can be enjoyed on Nippon TV, NHK, and J Sports, with OGPS as the broadcaster. In Australia, all of the 48 matches can be seen on Fox Sports and of the 48 matches, Network Ten will show ten of these matches (focusing on all matches in which the Australia team plays, the opening match, and the knockout matches). In Canada, this tournament can be watched on TBA. In Fiji and surrounding Oceania, all of the 48 matches can be watched live on Fiji TV. In France, all 48 matches can be watched live on TF1. In Germany, certain games will be aired on ProSieben Maxx, and on Ran, all 48 matches can be watched live. In Ireland, RTE will air 14 of the matches and Eir Sport will air all 48 matches. In New Zealand, TVNZ will air seven matches and Spark will air all 48 matches live. In South Africa, ESPN will be airing all 48 matches. In the United Kingdom, ITV will air all 48 matches and S4C will play nine of the matches in whatever language is spoken in Wales (including the four matches, at this point, when the Wales team will play). Finally, in the United States, NBC Sports and Univision will air these matches.

Where You Can Watch the Matches in Tokyo? (Bars and Pubs) 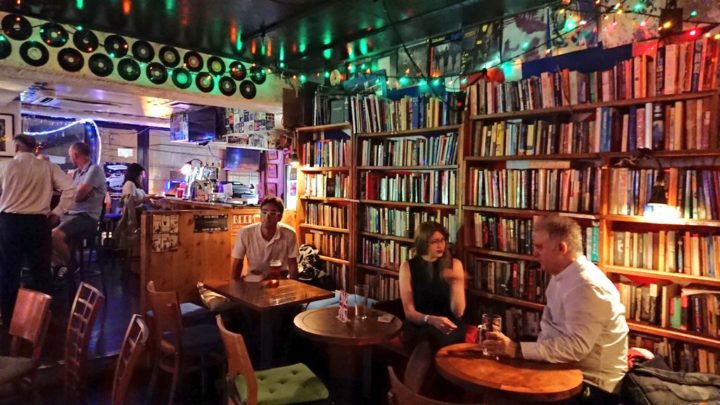 Any British-style pub is definitely a safe bet. Here are my recommendations.

This pub is in my neighborhood, Shimokitazawa, and is run by an actual Limey. This place is the most authentic British pub I’ve ever been too (I’ve never been to England, so I don’t know). This place has a great selection of imported beers, decent pub grub, the owner’s really nice, and soccer games and rugby games are always being played. On a side note, many famous western comedians routinely come to this place to perform when they are in Tokyo, and the cover charge for such events is also very reasonable. In addition, this place is a mini-bookstore: the owner has been collecting, buying, and receiving used English books for decades, and he sells them for very cheap right from the pub. I love reading, and one reason I actually avoid this place is that I always end up buying books when I have about three hundred books to read to home (this is no exaggeration). Anyway, this is my absolute number one recommendation, not only for the Rugby World Cup but just in general.

I’ve talked about this establishment in previous articles. This is not my favorite spot for drinks because said places are often very noisy and crowded. On the plus side, however, they are EVERYWHERE (I know of two or three in Shinjuku alone), they are always open, they have a good selection of British beers, and a decent menu. You can also smoke. AND, these places RELIABLY play soccer and rugby matches. In short, if you want to watch the Rugby World Cup somewhere, but you are not sure where to go, this is the place. You can find a Hub around any major train station in Tokyo (and probably in other major cities too). Good beer selection, decent food, always open, and 100% probability of catching the matches…you could do much worse.

I am now plugging places I have personally not been too, but from my assiduous research, this place appears to be a legitimate Irish pub, with a good selection of beers and large screen televisions for viewing commonwealth sports. In addition, I decided to plug this place because I personally love Shinbashi. Shinbashi, in addition to this Irish pub, has a ton of small, hole-in-the-wall type izakayas that I love. It also has the Shitamachi atmosphere (Shitamachi referring to “real Tokyo,” which is Tokyo from Marunouchi and heading east) I love. Get to Shinbashi early, check out some of these mom-and-pop izakayas, drink in the atmosphere, and then head over to Man in the Moon for the matches. Once again, you could do much worse.

I remember watching the Superbowl a few years ago at the Hard Rock Café in Roppongi. Now, going to the Hard Rock Café while on vacation in Japan may not appeal to you, but there are many other sports bars in this area. One such place I stumbled across in my research is an establishment called Hobgolbin, which is located in Roppongi. I actually went to this establishment last summer to watch the Soccer World Cup. There are huge big screens and the establishment itself is quite large. Also with a good beer selection and a decent menu, this is not a bad place to enjoy the matches. Also, and it goes without saying, there is a lot to see and do in and around Roppongi, so you could easily make a day of it in the Roppongi area and file in here later for some drinks and rugby.

This is also a bar I have not been to. This is a bar that specializes in soccer games (hence the name, FooT), though this establishment is scheduled to air the Rugby World Cup. Also worth noting is that there is a Hub in Ebisu too, so if this place isn’t to your liking, you can always head over the Hub.

Where You Can Watch the Matches in Osaka? (Bars and Pubs)

I don’t live in Osaka, so the following recommendations are based on my research.

Located in Osaka’s Chuuo ward, this Irish pub has been in operation for almost 30 years. This place has a good selection of beers and whiskeys, and in the immediate neighborhood, there are several other pubs. This establishment has lots of live entertainment and airs Commonwealth sporting events.

Where You Can Watch the Matches in Hiroshima? (Bars and Pubs)

Here, I should note that I have never been to Hiroshima, so I feel a bit odd about making recommendations for a place I have never visited (with the above recommendations, I have actually been to several of the places, and for the ones I haven’t visited, I at least have been to said areas, so I feel a little more comfortable in making said recommendations). Having said that, I did find this one spot, Molly Malone’s. From the website, I couldn’t find any information about the upcoming Rugby World Cup, so I called them up, and the friendly lady on the other end of the phone informed me that they would indeed be showing the matches (though depending on the time of the matches (i.e. those not falling within the operating hours of the shop), you might be out of luck). From their website, they have a pretty impressive food menu and drink menu. I have never been to this place (or Hiroshima, for that matter), but from I’ve seen, I feel confident in recommending this spot.

Where to Buy Tickets

In this day and age, a simple google search had led me to several sites for buying tickets. Here’s one, here’s another, and here’s another. From my limited research, these tickets are pretty expensive. Personally, I would rather do some barhopping at the abovementioned places to watch the matches rather than actually attend a live event.

How are Japanese people looking forward to the Rugby World Cup? 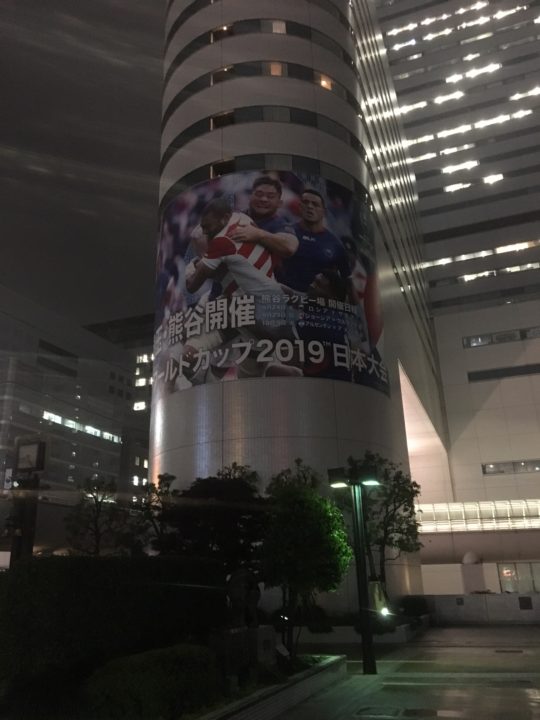 I have not heard anyone talking about the upcoming tournament, for whatever that’s worth, and this is not surprising, considering how rugby still has not caught on in a big way in Japan. Having said that, however, the signs and advertisements for this tournament are ubiquitous. Near my office, in Shinjuku, there are advertisements everywhere, and the catch copy is “not only once every four years, but rather, once in a lifetime in Japan” (or something along those lines; I wanted to take a picture for this article, but my phone was dead at the time). Japan aggressively promotes sporting events and tournaments taking place in Japan, including, certainly, the Olympics next summer. Also worth noting is that, once a major international tournament takes place in Japan, Japanese people genuinely become more interested in the sport in question. It is often said that many of the best Japanese soccer players in Japan, for example, were all influenced heavily by the Soccer World Cup held in Japan and Korea in 2002. So, if today’s kids are similarly influenced, perhaps the level of Japan’s rugby will be much better by the next Rugby World Cup (or more likely, the one after next).

The Rugby World Cup is coming up pretty soon, so if you find yourself in Japan during this period, I think it would be a very good experience to enjoy some of the matches here, and see how this sport is celebrated and viewed in Japan.