5 Things You Should Know About Pachinko in Japan | Guidable

5 Things You Should Know About Pachinko in Japan

If you come to Japan the first time it might strike you that there are pachinko (casino slot) are everywhere in Japan. The parlours are honestly everywhere. You can see the flash of their neon signs from the train as you pull into stations or just simply turn on the TV and you’ll catch an advertisement for new parlours and machines, some of the bigger manufacturers even have world-wide famous actors and actresses starred in their commercials. We can’t simply deny the enormous size of the casino slot industry in Japan.

What is pachinko in Japan? 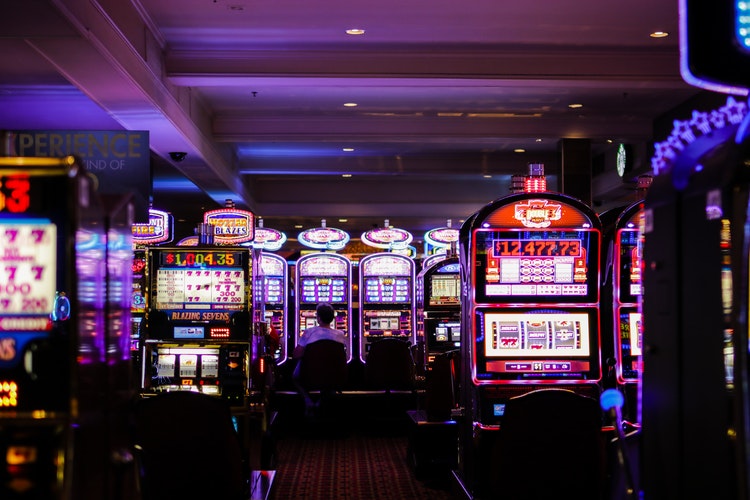 The game of pachinko is conducted on machines called ‘Pachinkos’ found in thousands of parlours across Japan, which is somewhat similar to the casinos found in the United States. A pachinko machine has a vertical playfield enclosed in a case. The player fires balls individually into the machine with a flipper, which then bounce down through the forest of pins. If the balls go into certain pockets, a payout of additional balls is triggered. Modern machines use a knob to fire the balls and are fully electronic with video screens and a wide variety of jackpot conditions and payouts. The first thing to understand is that you need to rent some balls to play this game. These balls are “rented” from the establishment, and redeemed for prizes when the play concludes. The balls are a way of keeping score, and they are your winnings. You go to the counter and in exchange for your currency, you are given a tray of bright steel balls, usually around 250. These balls are each engraved with insignia or characters that identify these balls as belonging to the particular pachinko parlour you are in. You then select a pachinko machine to play and load your balls into the tray. Using the flipper or knob, launch the balls into the game in hopes of triggering winnings or jackpots. The balls you win are released into the tray to be either removed from the machine or fired back into it. Often players will have stacks of filled trays behind them waiting to be “cashed in” because in general, the machines will pay out more balls than you put in. Once you are ready to leave, you signal one of the attendants to assist you. They always wear bright yellow jackets, so they are easy to find, and they will carry your winnings for you to a second counter.

The second counter will have a machine called a “jet counter” that will collect and count all of your balls for you, and they will issue you a slip indicating how many balls you had. Newer halls have jet counters without attendants that you can operate yourself. You cannot turn this slip back into currency directly. Around this counter will be display cases filled with prizes. These prizes range from pencils to cigarettes, from dish soap and perfume to CD’s or books. It is generally a very eclectic selection, and each can be purchased with a certain number of ball credits. What no one will tell you though, is that these prizes are also markers of a sort. There is always a place on the same block as the pachinko parlour where you can take the prizes and exchange them for cash. This is done to circumvent the gambling laws, and the practice is both understood and fully ignored by all authorities everywhere. Just keep in mind, players are forbidden to ask where the prize exchange location is, they are required to find it themselves. To get money, you need to ask for the “special prize” tokens. These are plastic gold-coloured tokens that can be swapped for cash — but not within the pachinko parlour. Instead, they are cashed in at TUC shops that are always located nearby and exist as a legal loophole enabling you to win money in a country that technically forbids gambling. The exchange of prizes for cash was once controlled by the yakuza(Japanese mafia), but has been cleaned up by the police, who now regulate it in this way.

Who is using pachinko? Why people are addicted? 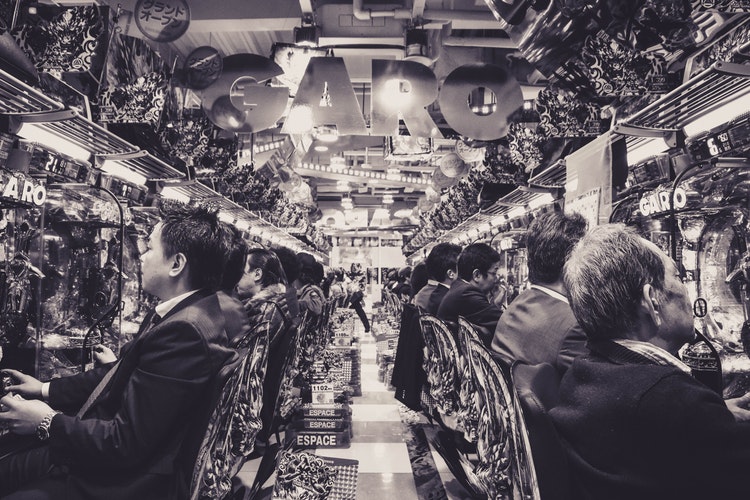 Once you stepped inside, you can easily spot players pack the narrow aisles of the parlour. Smoke from cigarette fills the room, and the sound is deafening. Lined up in long dizzying rows, the jangling machines look like the old school pinball games and futuristic one-armed-bandits, each one pimped out with powerful speakers, intense video montages, and a barrage of flashing lights. The combination of sound, smoke, and a light shake out to a full-on assault of the senses. The players sit transfixed–one hand resting on the machine’s dial, another on a joystick as their eyes glued to video screens and cigarettes dangling on the fingers. Most of them look like they retired more than a decade ago, however, there is a significant number of young people as well. Naoko Takiguchi is a sociology professor at Otani University in Kyoto. She runs gambling addiction rehab programs, and she says the video game aspect can heighten pachinko addiction–a condition she claims is already widespread in Japan. “The government does not acknowledge this is a big problem,” she says. Japan has recently made some regulatory changes to deal with addiction–most notably requiring the payout system to be less “exciting.” But since pachinko is still considered a game not gambling the highly addictive nature escapes scrutiny. And she says in Japan, addiction is already a topic that people don’t want to admit or even talk about. “It takes a long time for people to seek help,” she says, “it’s the shame.”

Why is it not illegal in Japan? 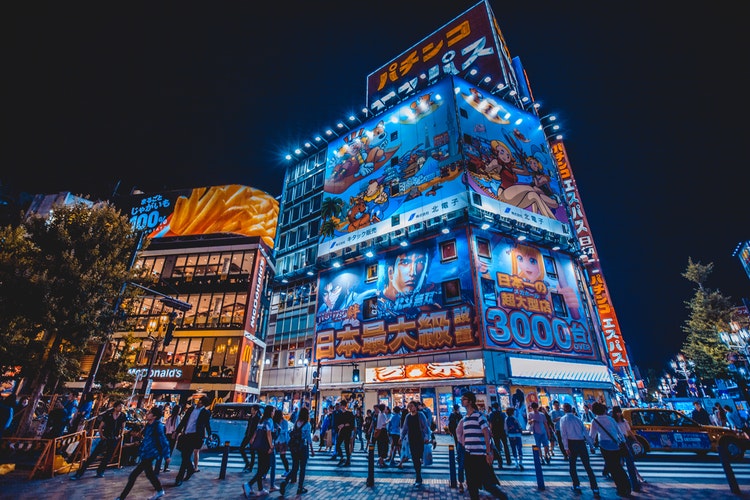 Unlike casinos in America, which are operated based on direct cash winning theory and therefore would be illegal under Japan’s strict gambling laws, pachinko has made itself legal on a loophole related to how you claim your prize. It is also tinged with taboo because of its associations to the Japanese mafia which once controlled the prize cashouts. Pachinko was first introduced to Japan the 1920s, but it really took off after World War II when the country’s largest minority group started opening parlours. Sung-Yoon Lee is an assistant professor of Korean studies at the Fletcher School at Tufts University. He says Koreans flocked to pachinko because they faced citizenship issues and discrimination that barred them from mainstream businesses. “This pachinko industry would have afforded an easier avenue to a livelihood,” he says, “it’s a cash industry of course. It’s a shady business.” Lee says most pachinko parlours are still owned by Koreans living in Japan. And about thirty per cent of those owners have ties to North Korea. He says at the peak of the industry in the nineties those owners were sending several hundred million dollars a year in cash to Pyongyang. “For a poor, small economy like North Korea, that isn’t an insignificant sum,” he says, “in fact, that would equal about North Korea’s annual export earnings for that year. So that’s a lot of money back then.”

What are the gain and loss of national-wise and individual-wise? 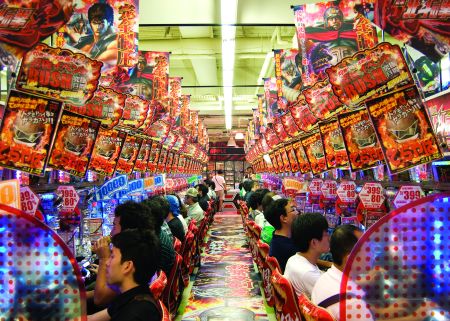 It sounds elaborate for a game, but pachinko is both big business and a national obsession – there are more than 12,500 pachinko halls in Japan, some with slot machines, which together make four times as much profit as all the rest of the world’s legal casino gambling combined. The game itself generates 30 trillion yen profit a year for the pachinko companies. Last year, the legislators have finally passed the law on legalizing pachinko activities in Japan, that also ended about 15 years of going back and forth on the argument. With an approximate of 30 trillion yen of profit equally 4% of GDP, Japanese pachinko is generating more money than Macau and Las Vegas combines, with undoubted consistency.

The future verdict of pachinko in Japan

Despite generating a huge benefit for the economy, Pachinko has always under the image of some-what illegal activity and often than not associated with addictive behaviours. Recently,  Pachinko giants want to capture – female players who want to play this stress-relieving game but without any stigma. Quieter, cleaner parlours are opening up where balls can be bought for just one yen each (rather than the usual four yen) with smaller potential winnings to switch the focus onto the game itself rather than gambling.

Many modern mega-parlours, such as Maruhan now offer smoke-free areas, following the lead of international brands in Japan like McDonalds and Starbucks. Prizes, such as handbags, are also targeting women, even has pamphlets with pachinko instructions in English to attract tourists to the game. A visit to any pachinko parlour is still a very Japanese experience, but in the future, it may look more like a family-friendly Las Vegas casino.