Takeout/Delivery Pizza in Japan: What is It Like? | Guidable

When you first think of popular foods in Japan, it’s likely that things like ramen, sushi, and tempura come to mind. But, you may be surprised to learn that pizza, the Italian-born international junk-food favourite has a huge fan following in the Land of the Rising Sun as well. First introduced by the US military after World War II, Japanese pizza has since, like many Western-styled foods that can be found here, developed into a unique cuisine of its own.

Japan is host to a dizzying array of unique pizza flavors that will excite the adventurous and repulse those in search of a standard slice of pepperoni. Scouring the menus of Japan’s top pizza chains, these are the top 9 pizzas you should consider trying when you’re in Japan. 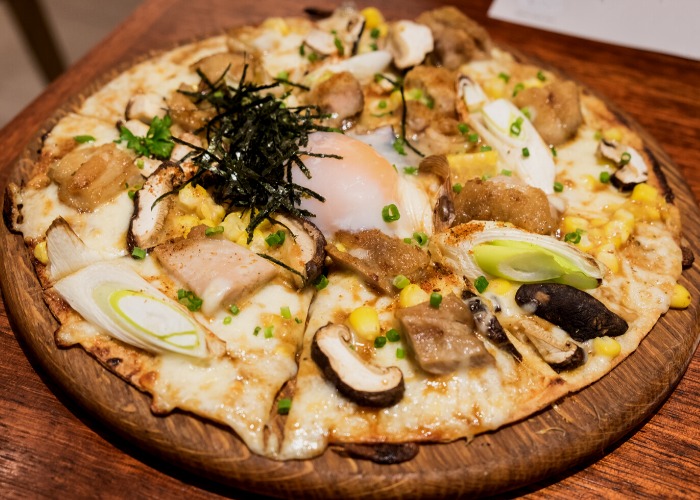 Chicken pizza may be no stranger to Western palettes, but you’d be hard-pressed to find this sweet-savoury combo on any pizza outside of Japan. Still, the flavor is familiar enough that it makes a good gateway into unique Japanese pizzas. 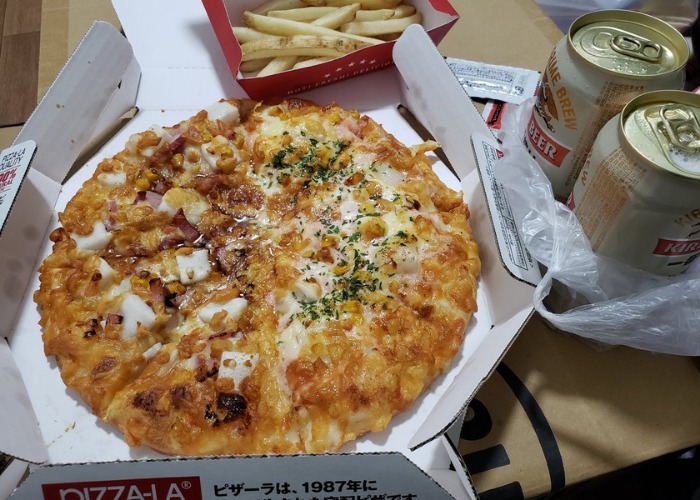 Japan’s classic chewy rice cake makes a surprise appearance on pizza! While carb-on-carb may seem off-putting to some, the fun play on textures makes it a pleasurable eating experience. And, for some reason, mochi and cheese taste great together! 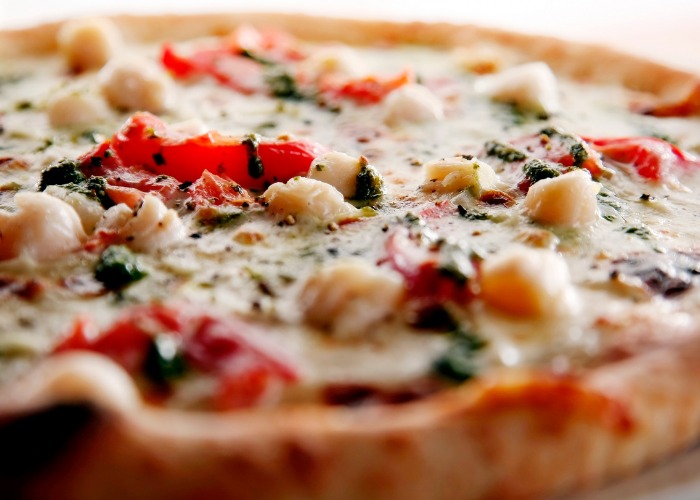 Just like in its local cuisine, pizza in Japan has no limit to the amount of variation in the seafood offerings found on pizza. While squid is one of the most common, more deluxe pizzas, can include things like salmon and crab! Rather than a tomato base, these seafood pizzas usually feature a mayo-cream sauce, so they are quite rich. 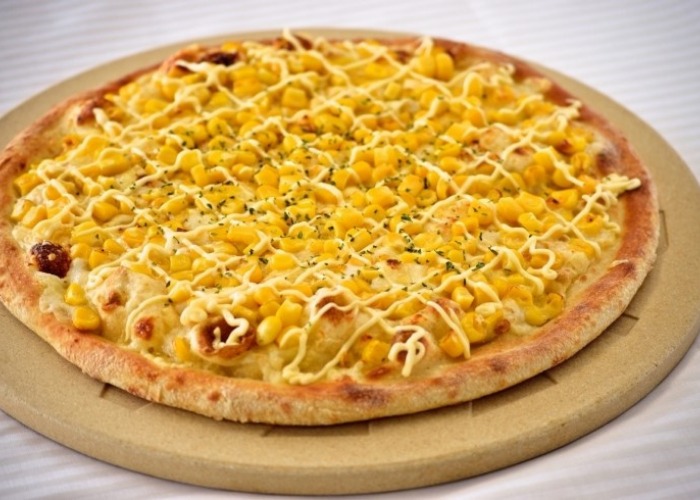 Ah, corn. The butt of all jokes concerning pizza among Japan’s expatriate community. While not the most thrilling topping by any means, I struggle to find why its presence is met with such revulsion. Maybe I’ve lived here too long… 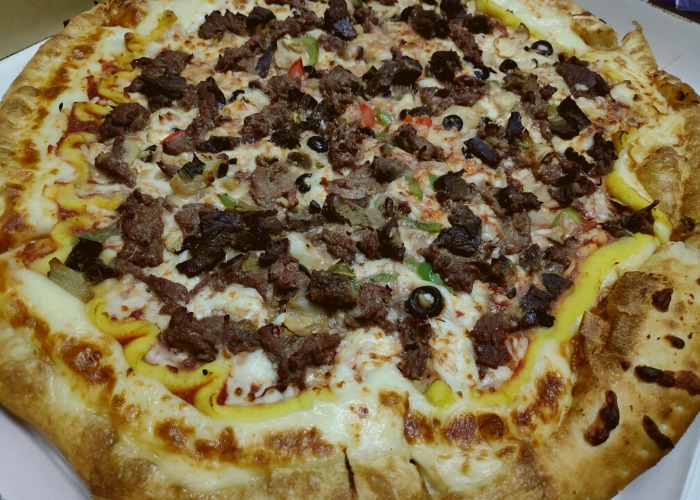 A Dominos specialty, this unique pizza is actually a trifecta of culinary exchange: Spicy Korean bulgogi on an American pizza is a concept that could only have been thought of in Japan. This beef-laden pie is probably perfect for people wanting to “get their money’s worth” as it is *very* filling. 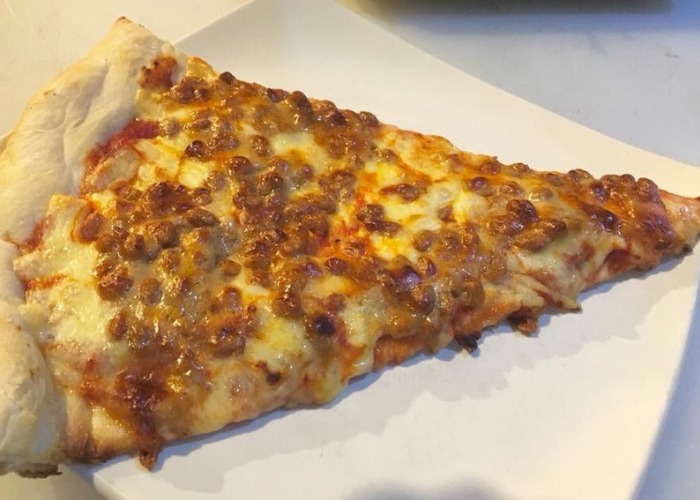 Yes, natto, the food foreigner and even a lot of Japanese people love to hate. If you’ve always been to scared to try Japan’s infamous sticky beans, thrown on top of a cheesy pizza is a great way to start, as the cheese cuts through the sliminess and the smell. And let’s be honest, isn’t cheese a fermented food, too? 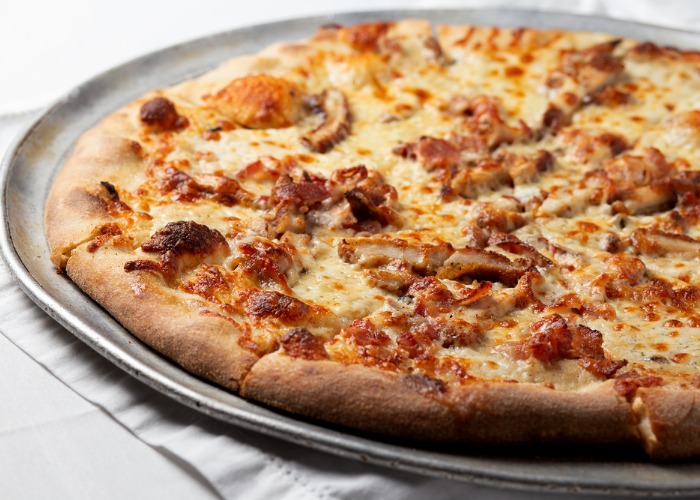 Another topping a lot of people are on the fence about. I feel like this one is perfect if treated more as a flatbread and less as a pizza., perfect for sharing as a group over a glass of wine.

(What is the difference between flatbread and pizza, actually?) 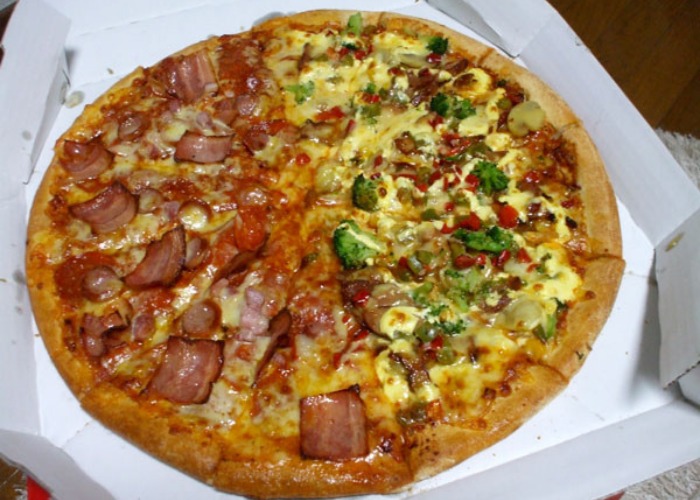 Less a pizza and more of a concept. While Aoki’s coined the phrase, Pizza-La actually takes it further. These pizzas offer the best opportunity to try Japan’s unique varieties all in one go, as a single large pizza can be separated into 4-8 different flavours!

My personal favourite, and one I actually made quite frequently at home before moving to Japan. Spicy cod roe, cheese, and nori (bonus points if there’s mochi, too) is an unlikely combo that just can’t be beat! 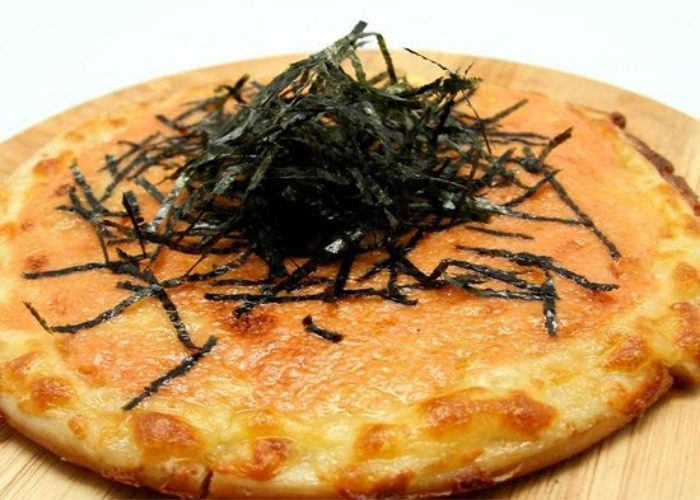 Be warned, however, that even more “standard” flavored pizzas will likely differ quite significantly to their Western counterparts. Rather than the toppings themselves, the crust actually tends to be the biggest offender in Japanese pizza, with even the thinnest thin crust in the West struggling to compare to the crepe-like texture of Japanese pizzas. While many takeaway chains tend to be a little more solid, keep this in mind if you decide to order pizza at a restaurant.

A particular run-in with this crepe-crust that comes to mind was at a local Italian restaurant my co-worker wanted to visit. Because finding good pasta is arguably an even more arduous task than pizza, I opted for the Camembert-honey strawberry pizza. (yes, you read that correctly.) While making changes to orders in Japan is generally seen as a little frowned upon, I wanted to ensure that the texture was to my liking. I politely asked the waiter if it would be possible to make it a little more “kari-kari” (crispy, or crunchy). He seemed perplexed and assured me that all the pizzas at the restaurant were fresh and crispy.

When my pizza appeared, and I went to pick up the first slice, the floppy wafer almost dumped all of its toppings back onto the plate.

I ended up rolling up the slice and eating it with the provided chopsticks.

Moral of the story? Japanese pizza can be good if you approach it from the same perspective of Japanese food found in the West: Not at all the same, sometimes downright odd, but often tasty nonetheless. Pizza is one of the most unique “Western” foods you can eat in Japan.

Which Pizza Company In Japan Should I Choose?

So, you have decided to take the plunge into the unique world of Japan’s Takeout/Delivery pizza! There are a handful of pizza companies to choose from, but we will analyze the four biggest contenders on the Japanese pizza market: American imports Dominoes and Pizza Hut, and locally-based Pizza-La and Aoki’s Pizza.

The largest of the pizza chains in Japan, Dominoes offers some of the heartiest, meat-laden pizzas on the market. They also have a 2 for one deal, which helps make the price seem a little more reasonable.

Pizza Hut’s menu is likely to seem the most “familiar’ in terms of toppings and textures, making it a popular choice among expatriates. It’s also a great choice for sauce-lovers.

Pizza-La is a local Japanese company that’s been around for over 20 years. They offer a wide range of toppings and are purportedly the only place that Hawaiian lovers can get their pineapple fix.

Aoki’s is arguably the strongest contender if you’re after the true Japanese pizza experience. With high-quality ingredients and plenty to choose from, they are a great way to try out unique delivery pizza in Japan.

Why Pizza is so Expensive in Japan?

So, you’ve chosen your pizza company and decided which unique Japanese pizza you would like to try. Especially if your Japanese isn’t so good yet, you are pleasantly surprised to see that the websites of all four chains offer English.

And then you see it. The prices.

I regret to say that your eyes do not deceive.

Medium pizzas, on average, start at around 2000 yen, and a large made with more premium ingredients can run upwards of 3500. That’s as much as 2-3 pizzas in an American pizzeria, for a pizza likely twice the size.

Why are pizzas in Japan so expensive? There aren’t concrete answers, but a number of plausible theories exist.

The ingredients: As anyone who’s lived in Japan for any length of time can attest, the price of cheese in Japan significantly higher than what can be found in the West. Not to mention the other ingredients, like the seafood-laden deluxe pizzas commonly found on menus here often have higher price points than Western staples like pepperoni or olive.

This is more of a comparison between America and Japan, rather than the Western world as a whole. People working in the American service industry rely quite heavily on tips as part of their wage, with restaurants providing a salary that is often close to half of the minimum wage. This means that food prices on the menu are often lower, but the added 15%-20% tip that comes at the end of the meal can often bring the price up.

In Japan, tipping is almost unheard of, as there is a strong sense of pride in one’s work, and the idea of incentivized good work is seen as insulting. This means that the staff is paid a more reasonable wage, which drives businesses to raise prices. 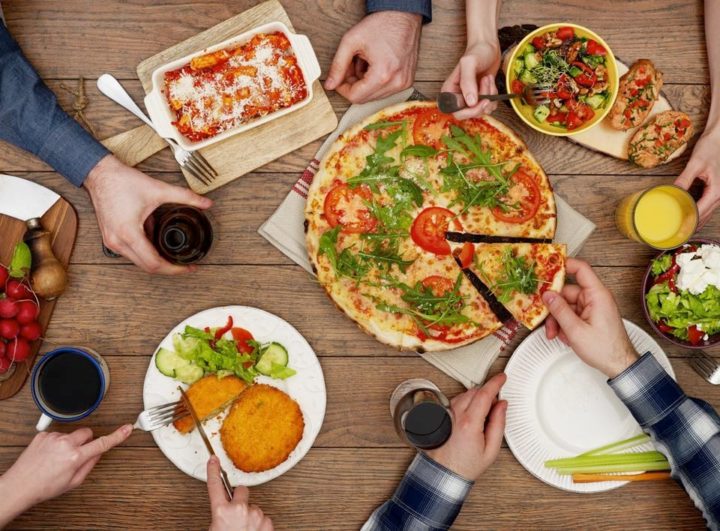 Not an everyday food

While other foods with Western origins, like sandwiches and curry, can be readily found at low prices, pizza is still seen as a somewhat “special occasion” food. Food in Japan is typically served in individual portions, with large sharing platters being quite rare, even in home dining. That and the fact that Japan never does anything by halves when it comes to presentation means that pizza in Japan is seen as quite a festive, unique food. Contrast this to the role delivery pizza plays in countries like the US: don’t feel like cooking? Order a pizza! With the “lazy day” food market dominated by convenience stores and ramen bars, pizza’s price tag and impressive display make it much more suitable as a food sheered with friends than one eaten alone in front of the television.

Although pizza has existed in Japan for over 40 years, delivery was only introduced during the 1980s. Though the concept of takeout, or food that was meant to be eaten quickly on the go, was no stranger in the Japanese food scene, the concept of delivery was entirely new. Before the advent of uber eats and delivery, companies that have only appeared in the last few years, home delivery was almost exclusively pizza. This added to the foreign mystique of the cuisine, and also increased production costs, as Japanese pizza companies are responsible for their staff’s fuel, vehicles, ect.

Takeout/Delivery Pizza Is So Unique in Japan!

What do you think? Which pizza are you the most interested to try?