Each country has its own unique paste or sauce that they commonly use, whether it’s the hot and tasty chili paste from Thailand that most Thai people incorporate into many of their meals, or ketchup, the sweet tomato sauce from America that most Americans love with their dishes like french fries. Likewise, Japan is also a country that is no stranger to condiments, with some so unique that they amaze foreigners and tourists, including wasabi.

Have you ever looked at a plate of sushi and wondered, “What is the green paste next to the sushi?” Or were you ever surprised by the hot and almost intolerable taste that suddenly appears in your sushi? That green paste, or sometimes a hidden surprise inside sushi, is wasabi. As it is hot in taste, it’s also hot in popularity. It’s almost impossible to think of some of Japan’s famous dishes, like sushi, without thinking about its sidekick – wasabi. But what exactly is wasabi? Why does it taste the way it does? Let’s find out!

What is Wasabi? The Plant Behind the Hot Paste 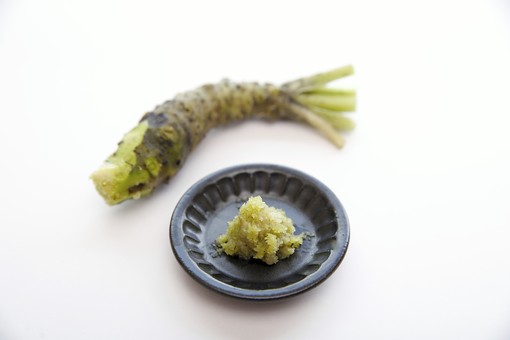 Wasabi is a kind of plant used to make the wasabi paste. It has a long vertical shape, with stems, leaves, and at the right age, white flowers, on top of the main stem. The main stem is underground, while the leaves and flowers are above ground. In Japanese, wasabi is written in Hiragana as “わさび “, in Katakana as “ワサビ”, and in Kanji as “山葵”. In Kanji, “山” (yama) means mountain, while “葵” (aoi) is basically a name of a certain type of plant. Wasabi’s English name is “Japanese horseradish”, and the only difference between a “Japanese horseradish” and a “normal horseradish” is that products made from a normal horseradish have a natural creamy-white color, while products made from a Japanese horseradish have a natural green color. Wasabi is edible raw, and the plant falls under the Brassicaceae or Cruciferae family, with the common name of the family being “mustard family”. This family of plants also includes other common vegetables such as broccoli, cabbages, and brussels sprouts.

Wasabi grows best in cool and shaded areas, and naturally grows in shadowy fresh mountain streams. Although originated in Japan, wasabi also grows in other countries such as China, Korea, Taiwan, and New Zealand, in parts with chilling airs, humid weather, and appropriate dimness. Wasabi also requires clean and fresh running water to grow, although it can also be grown on soil. 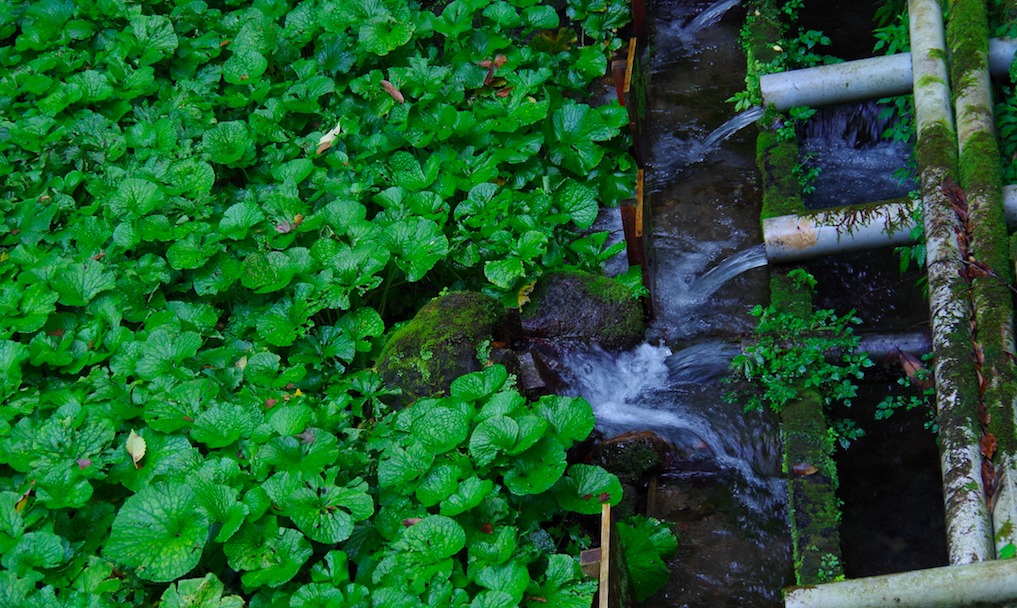 Soil-based wasabi is called ” おかわさび ” (okawasabi) in Japanese, with ” おか ” (oka) meaning “hills”. Wasabi grown on soil needs to be fertilized with organic fertilizers, and chemicals such as pesticides are used on the plant regularly in order to keep the plant healthy and bug-free. A specific climate and soil pH level are also important factors that determine wasabi’s growth. Most farmers grow soil-based wasabi in a shade house.

With wasabi’s specific surroundings and conditions required in order to grow, growing wasabi commercially can be a challenge. Each farmer has their own special methods used with wasabi, making the wasabi’s taste and size highly dependable on the farm and place it comes from. Wasabi’s roots and stems are usually the part consumed by people, although other parts of the plant, such as the leaf, are also edible. Raw wasabi is made up of 83% carbohydrate, 5% fats, and 12% protein.

Wasabi in Japan: Since When Did It Become a Thing? 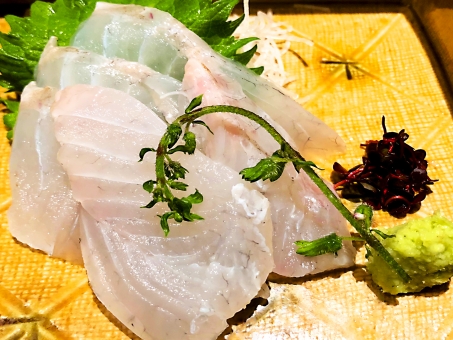 In Japan, wasabi was actually discovered and used for its medical features rather than for its taste. In the past, Japanese people first used wasabi as a medicine. Consuming raw or uncooked food, such as “sashimi”, a thin-sliced raw fish or meat (written in Japanese Kanji as “刺身”, with “刺” (sashi) meaning pierce, and “身” (mi) meaning body or meat), can cause sickness and food poisoning, especially in the past when sanitization and effective cures were a challenge, and insects could easily spread dangerous bacteria. However, the Japanese discovered that they could avoid illness by eating raw food with wasabi. Additionally, when sushi was invented during the Edo period to help preserve fish, Japanese people used wasabi as a condiment to the dish because the strong and spicy wasabi taste helped decrease the smell of raw fish, and also for the supposed health benefits it provides. The practice became more common over time, and more people started implementing wasabi into their food.

Moreover, because wasabi had been found and consumed for a long period of time, the first place it was bred and domesticated is still debatable. However, the origin that most people believe to be the first place that wasabi was grown by humans (and not naturally in the wild) is Utogi in Shizuoka prefecture. This dates back to the Keicho era, between 1596 and 1615. The story was that a villager went to Mt. Wasabi and retrieved wasabi back to the village. After the villager successfully grew wasabi, other villagers caught on to the trend, causing the spread of wasabi cultivation in Japan. The field that the villager used to first grow wasabi was preserved and still exists until today in Utogi.

How Is Wasabi Paste Prepared? Is the Paste Really Made From “Wasabi”? 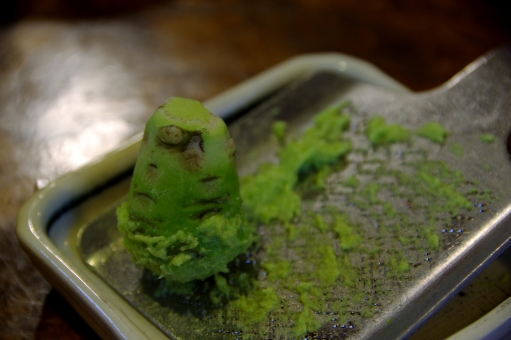 In the past, wasabi was prepared and consumed by grating raw wasabi into a paste, and then directly consumed as a condiment. Sharkskin, or “oroshigane” graters were used in the past to grate wasabi, and are still regarded as the best way to grate the plant in modern day. The grated wasabi would also sometimes be mixed with other ingredients such as soy sauce and/or vinegar before being added to a dish. This method still exists today and is how some Japanese consume wasabi.

Nonetheless, the most popular way of consuming wasabi in modern day is through a “wasabi paste”, which is made with a mixture of normal horseradish, mustard, and green food coloring. Yes, most modern-day wasabi paste actually doesn’t have any wasabi in it! It is simply made with ingredients to imitate wasabi, with the spiciness depending on the brand that made the paste. With wasabi’s high price and delicateness, real wasabi is not a popular ingredient to make wasabi paste.

What Makes Wasabi So Spicy? 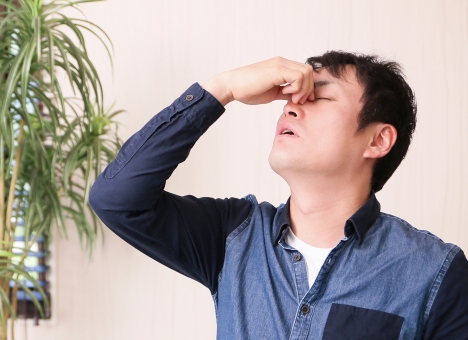 The reason behind wasabi’s strong and spicy taste, so strong that it could make some people burst into tears, is from how the human body reacts to the plant’s chemical. Wasabi consists of  “allyl isothiocyanate,” an organic chemical compound that can also be found in mustard and most plants from the Cruciferae family. This chemical compound reacts with a receptor inside our human bodies, the “wasabi receptor”, and this reaction is what causes our bodies to feel the stingy sensation and spiciness from wasabi. This receptor also reacts the same way with chillies. Reaction with allyl isothiocyanate can also cause a burning sensation and can trigger tears, due to the human body not being familiar with the chemical.

Therefore, it is advised to consume wasabi in an appropriate amount at a time. Too much wasabi can make the sting unbearable, especially that the stingy sensation also goes up to the brain. Especially if it is your first time trying wasabi, it is best to try it in a small amount. But if you enjoy the unique spiciness of wasabi, and can consume it at a large quantity a time, then have a blast! 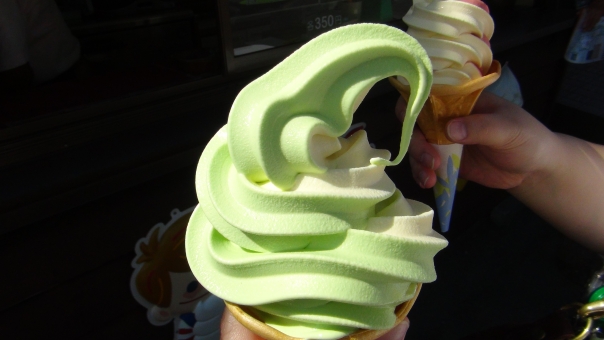 Other than crispy and salty snacks, wasabi has also expanded into sweet and sugary snacks. This may sound strange for most foreigners, and maybe even Japanese people themselves, given that the strong sting that characterizes wasabi is such a polar opposite taste from something sweet. Nevertheless, it is also this contrast between wasabi and sweetness that made wasabi-flavored sweets a favorite for some. These sweets include snacks such as wasabi-flavored chocolates, ice cream, and even macaroons. With wasabi macaroons, wasabi is either used in the form of a powder and mixed with the batter before making the shell, or in a paste (and sometimes also in powder form) and then mixed in with the macaroon’s fillings.

If wasabi-flavored snacks do not sound so strange to you, perhaps a wasabi drink will. Wasabi is usually combined with drinks that contains alcohol. For instance, wasabi paste is incorporated into cocktails to give the drinks a spicy taste and is called “wasabi martini”.

Health Benefits From the Hot Wasabi

Wasabi has several health benefits for the human body. The most instant and easily noticeable one is that it can instantly clear sinuses. Although medically it does not actually “dissolve” the sinuses in a way that makes it completely disappear, it does help your brain to think that your nose is less blocked.

Given that wasabi is a type of plant, it contains fibers that are important for the human body. Wasabi also contains vitamins such as vitamin B, vitamin C, and vitamin A, and minerals such as calcium, magnesium, and potassium. These vitamins and minerals are essential to maintain good health and can help the human body to function normally on a daily basis.

Wasabi also has anti-food poisoning properties, the feature that made it popular in Japan in the first place. Studies have shown that it can also be use to prevent diarrhea and is beneficial to the colon system. Wasabi is also good for the digestive system as a whole and can help prevent several kinds of diseases.

One of the most significant health benefits wasabi has is its anticancer properties. Anticancer chemicals could be found in wasabi, and regular consumption of wasabi can help reduce the risk of certain types of cancer.

Wasabi is low in cholesterol and sodium, so other than the burning taste, wasabi has very little to no health disadvantages. Additionally, although modern-day wasabi paste is made from “fake” wasabi, European horseradish, which is commonly the main ingredient for the paste, still shares some of the health benefits that real wasabi has.

Wasabi has long been one of Japanese people’s favorite and most consumed condiments. Its popularity, especially in its unique and strong flavor, has made wasabi one of Japan’s most consumed condiments. Some people have a love/hate relationship with wasabi, while some are firm lover or hater. Whether you love or hate this spicy paste, you will definitely encounter it in Japan. Now that you know more about wasabi, don’t be weirded out by the green paste next time you eat sushi!