Japan’s culinary culture has been made famous worldwide for its one-of-a-kind delicacies such as sushi, sashimi, and ramen. Japanese “yaki” foods are so delicious, I guarantee you’ll want to try them all. So, let’s find out more about these dishes!

What Does “Yaki” Mean?

We often see the word “yaki” when eating at Japanese restaurants. Yaki (焼き) means “grilled, boiled, and pan-fried” or, in other words, “cooked over a direct heat source.” Therefore, most of those dishes with “yaki” in their names are often cooked using these methods.

In addition, this word has the same pronunciation as the word 夜気 (Night air), also read as “yaki.” This makes perfect sense as there is nothing better than to enjoy warm and delicious “yaki” food outside with your friends or loved ones on a beautiful night.

Needless to say, there is a wide variety of “yaki” food in Japan, and all of them are worth giving a try. Still, the five “yaki” dishes mentioned below are some of the best known for their out-of-this-world tastiness that you definitely cannot miss out on when coming to Japan.

Some Famous “Yaki” Food You Should Try 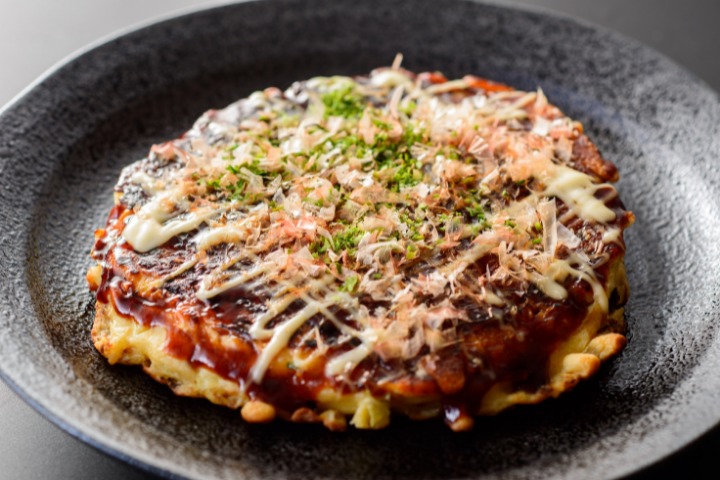 Okonomiyaki (お好み焼き) is the first candidate I will mention when it comes to our “yaki” food collection. It is a famous dish in Japan, especially in the Kansai region in places such as Osaka. The word “okonomi” (お好み) means “preference” or “how you like.” Just as its name suggests, this scrumptious dish can be cooked based on your liking, choosing from a wide selection of meat, seafood, and vegetables such as octopus, pork, cheese, and noodles.

However, its ultimate component is shredded cabbage. There are also flour, eggs, long strips of pork belly, and grated yam. After being stirred together in a bowl, all ingredients will be poured onto a griddle to cook. From there, we can add other okonomi veggies or meat and additional toppings like bonito flakes (katsuobushi), seaweed flakes (aonori), and pickled ginger (benishouga). Still, this dish isn’t complete without creamy Japanese mayo and a mix of Worcestershire and oyster sauces. 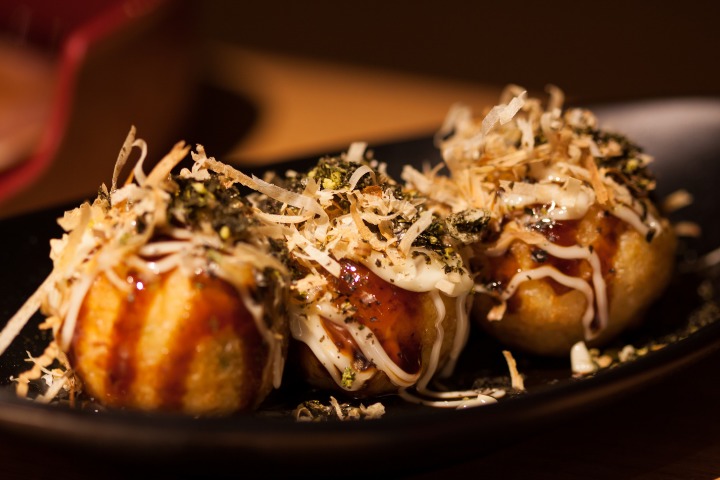 Another popular cuisine from Osaka is Takoyaki (蛸焼き). Tako (蛸) means octopus! And so, Takoyaki is a snack made from shredded cabbage mixed into batter, fried with small octopus pieces on a cast iron pan into small ball shapes. Like Okonomiyaki, Takoyaki is best served with mayo and Worcestershire sauces and additional toppings such as bonito flakes, seaweed flakes, and pickled ginger. It is must-try street food in Osaka, so make sure to give it a try when you have a chance, as it is addictively delicious. 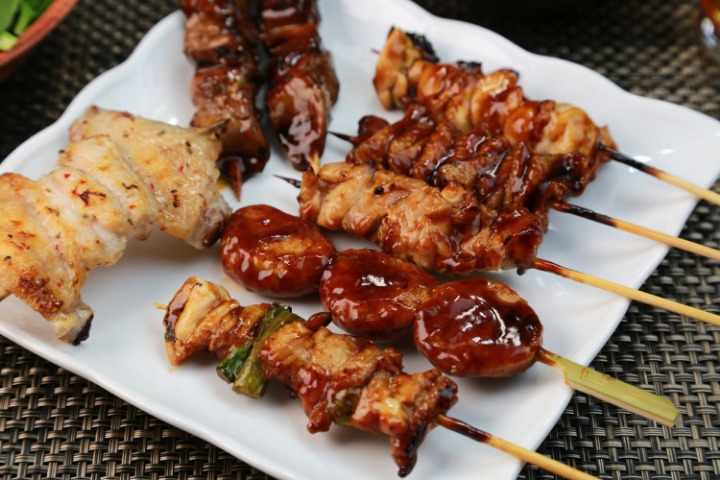 Tori (鳥) means chicken, and if we put yaki- with it, we will have a wide variety of skewered bite-sized pieces of chicken roasted on a charcoal grill to perfection called yakitori (焼き鳥). It is often flavoured with tare or salt, making the taste a whole new level. You can often see this juicy snack in izakaya, where people hang out and get a drink together after a long day’s work. There is nothing better than enjoying yakitori with a beer while talking with your friends. 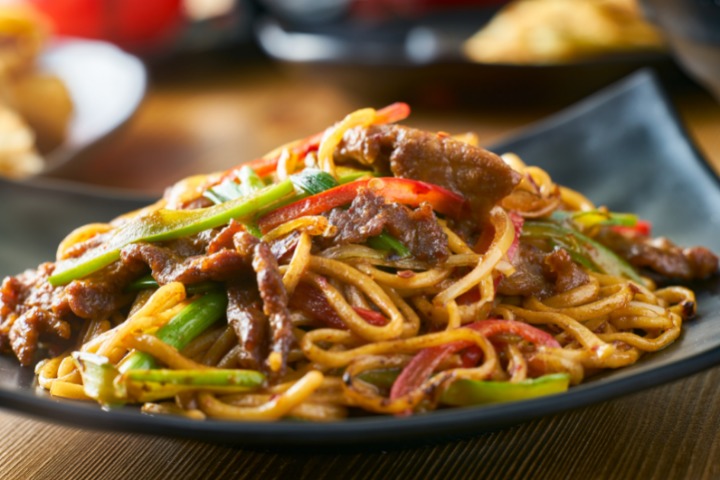 Yakisoba (焼きそば) is a stir-fried noodles dish, mixed with thinly sliced pork belly, shredded cabbage, carrots, and scallions, garnished with pickled ginger. Soba is “buckwheat” in English, and while luxurious soba is often derived from 100% buckwheat, soba used in yakisoba is usually made from wheat flour. Still, it has a chewy texture perfect for frying up into slick and delicious yakisoba. After boiling the noodles and stirring them up in oil and oyster sauce, the cook will add bite-sized pieces of pork belly and chopped vegetables such as cabbage, green onions, bean sprouts, and carrots before frying. Along with the original version of yakisoba, you can also try other creative ones such as omusoba (yakisoba wrapped in an omelette) or yakisoba pan (a sandwich made of a hotdog bun stuffed with yakisoba). 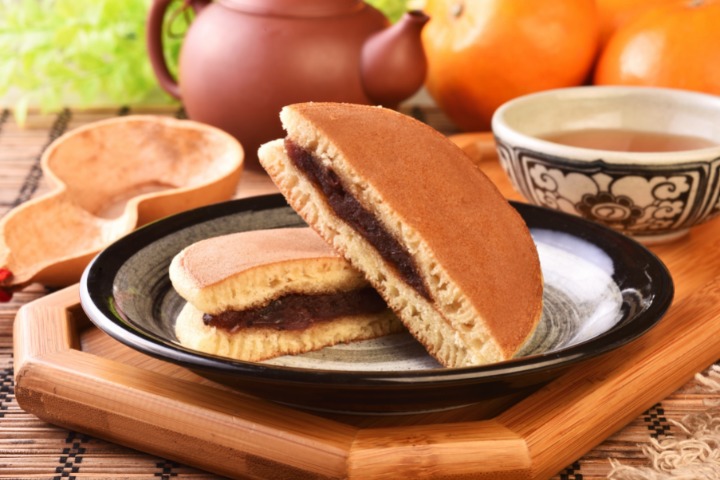 Had enough of savouries? Then, dorayaki (どら焼き) is here to the rescue!

Have you ever heard of “dorayaki”? If you’ve watched “Doraemon”, this may be a snack you want to try at least once. Dorayaki is a delectable wagashi sweet that consists of two pieces of round pancakes that sandwich filling of azuki or red bean paste. Along with red beans, other fillings such as matcha or chocolate are also other popular. It is undeniably addictive after taking a bite of those fluffy pancakes as the sweet, slightly chunky red bean paste sandwiched in the middle brings me back to the childhood happiness of watching the Japanese cartoon character Doraemon enjoy his dorayaki.

Have These Delicious “Yaki” Food Made Your Mouth Water Yet? Go and Give Them a Try Now!

“Yaki” food collections are something that you don’t want to miss out on when exploring Japanese culinary culture. So, if you are a “yaki” gourmet fan, check these out now!

For more exciting articles about Japanese food culture, follow us at @guidablejapan.