The Most Magical Place on Earth 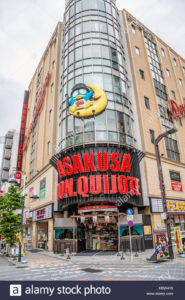 If you have lived in Japan for any period of time then it is almost certain that you will have spotted a large blue penguin wearing a little red hat, perched along rooftops of commercial areas, playing a melodious tune that some Japanese would consider a national treasure

His name is ‘Donpen’ and he is the main mascot for Japan’s premier discount chain store, Don Quijote, ドン・キホーテ. The store has over 400 locations across Japan, being one of the largest chains within the country with an almost cult following among its fans and consumers.

And with good reason.

Once stepping foot within a Don Quijote many would claim that there is a ‘sensory overload’ and that there is a very real fire risk. However, the haphazard packing of goods floor to ceiling along shelves, leaving room for only 1 to 2 people between aisles, for floors upon floors is Don Quijote’s signature style and is what has been keeping the population of Japan returning to the store day after day for four decades.

It goes further than that though, Donki, as many refer to it in Japan, also has 24 hour opening times. All stores across Japan, every single chain and department is open at all times of the day! This schedule means that even when other stores close, shoppers can still find and purchase the items that they need, especially if they are required urgently, giving Donki the edge they need over rivals. 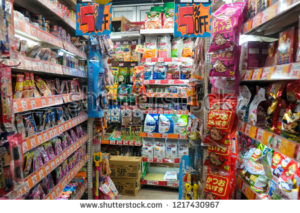 This makes Don Quijote an especially popular chain when compared with other discount chain stores such as Daiso and ¥100 stores. This popularity is further enhanced by Donki’s astounding range of products, ranging from your everyday foodstuff to your niche air humidifiers, that are all sold at prices that are tough to beat anywhere else.

It is easy to see why Japan loves Don Quijote.

The History of Don Quijote

Don Quijote first opened its doors in Suginami, Tokyo under its original name of Just Co. in 1980. Originally it was branded as just a retail store, however it quickly changed to wholesale 2 years later in 1982.

The company opened its first ‘Don Quijote’ named store in Fuchu, Tokyo many years later in 1989. With this name change the company firmly changed its primary business stance from wholesale to retail. It was not until another 6 years later in 1995 that Just Co. decided to change its corporate to Don Quijote Co., Ltd as well as to fit in with their branding.

Following that, in June 1998 the company also became listed on the Tokyo Stock Exchange, and so began their monumental rise to the goliath of a Japanese corporation that they are today. 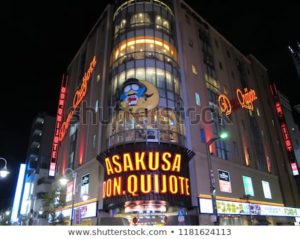 At the end of the Japanese economic bubble crisis in 1992, Don Quijote’s status as a discount store helped it survive the economically uncertain times. The economic uncertainty encouraged and taught the Japanese public to become thriftier, this in turn helped boost store sales during the early 1990s as more and more of the public turned to Don Quijote for all their shopping needs.

This influx of people and dramatic change in shopping/spending culture helped lay the groundwork for the popularity and following of Don Quijote in modern Japan. Many residents of Japan will still remember the help that Don Quijote was during the recession, and this passion for the brand has manged to retain its place among the now more economically stable times of Japan. 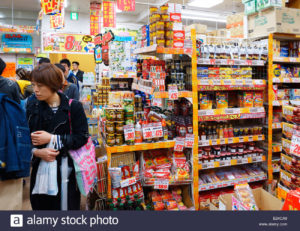 ‘Miracle Shopping’ is a term that Don Quijote has coined in regard to the retail potential of its store, they even have a store theme that plays at all hours within every single one of the 300 stores.

The song called ‘Miracle Shopping’, ミラクルショッピング, sung by one of their employees, Tanaka Maimi, has become a cult staple in all of their stores since its implementation in the mid 90s.

While listening to the same song for hours upon end when shopping in the crowded, fluorescent aisles of Don Quijote can be draining, especially to those new to it. The music is all part of the charm of the place, and Don Quijote would not be Don Quijote without that signature tune that has charmed its way into the hearts and minds of the Japanese populace.

However, all of this branding and meticulous design, despite its haphazard looks, would be for naught without the range of ‘miracle’ shopping to back it up. And Don Quijote certainly has a range.

From its larger stores such as the 8 Floor Asakusa branch to the Smaller 2 Floor Bunkyo Branch almost everything and anything can be found crammed into the corners and crannies of Don Quijote. Each store sports separate areas that house different types of products, such as toys, electronics, clothing and food to more niche sections such as plushies, phone cases, flip-flops and rice.

Each and every section of a Don Quijote has its own distinct tone that can be felt when traversing the shop floor. Made meticulously and presented in a certain way after years of experimentation to find the perfect layout to help boost sales.

It may seem like a one in a million chance to many that Don Quijote has managed to survive this long and flourish across its long history. It must be a fluke, right? How could a store such as this survive when there are much more competent seeming rivals around every corner in the world of Japanese retail?

Whatever you may think about the validity of Don Quijote’s success, there is indisputable truth that every move, every decision, every placement of goods, every shape of aisle, every tank of exotic fish present outside Don Quijote’s is a strategic business move designed to increase sales and the reputation of Donki. After all it is no luck that the parent company behind Don Quijote ‘Pan Pacific International Holding Corp’, is soon poised to become Japan’s 5th largest retailer with a revenue of 1.4 trillion Yen 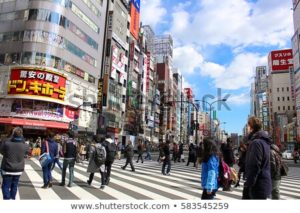 Michael Causton, a retail analyst in Tokyo that works for Japan Consuming says that “It’s chaotic, messy stores, belie what’s behind it – a highly disciplined, extremely rigorous management philosophy”. Whilst, analysts and business developers worldwide, have been shocked at the growth of Donki despite it doing everything wrong, yet it still getting it all right, there is one simple decision that has kept Don Quijote afloat and thriving for so long. Decentralization.

It is in their management philosophy that floor staff should have near-total autonomy to decide what to sell. Store managers and their employees have control over the shop, not some office miles away. It is up to the employees to decide how to control merchandising, how to negotiate prices with their suppliers and how to stack the shelves and present the products to consumers. To help ensure that customers will always be coming back to Don Quijote, especially since they can be coming back 24/7.

In recent years Don Quijote has closed numerous branch offices and cut down the number of regional level managers to help ensure that floor staff need to answer to fewer people before making decisions. Just like Don Quijote’s in different countries that need to run on different rules and schemes, the Don Quijote’s of Shibuya and Akihabara despite only being miles apart run on completely different goods and layouts to better suit the populace of the area. 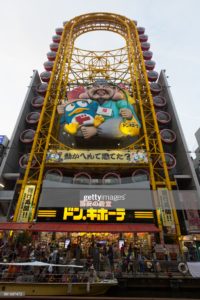 One good example of this mantra in action is during a journalist’s visit to the Shibuya branch, one shelf that used to be full of beauty products near the entrance now oozed with sunscreen, cooling-wipes, and deodorants. When asked, the manager of the store explained that until that morning the shelf was only full of moisturisers however, expecting the warmer weather the staff made a quick change to better suit the conditions.

This ability to change tack and course on the fly has allowed Don Quijote to stay on the pulse of Japanese consumers for nearly 40 years now, and their sourcing strategy has been a large part of this. Analysts estimate that half of Don Quijote’s profit come from selling leftover good acquired on the cheap, allowing them to purchase large bulk masses of goods and sell them for a cheap price.

As Don Quijote reaches even higher heights within its homeland, management is looking to expand overseas with new stores opening up in Singapore and Thailand as Donki tries to stake claim over more of the Asian retail market. 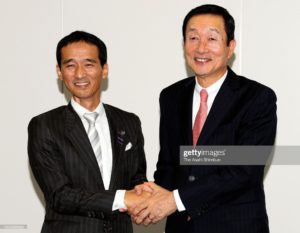 Along with Don Quijote’s purchase of the merchandise store unit of FamilyMart Uny Holdings, there are some big expansions in the works for the company with an aim to open 500 stores by 2020 across Japan. With 420 stores currently, and a further 200 Uny stores being rebranded into ‘Mega-Don-Quijote-Uny’ Don Quijote’s targets look very reachable.

As Japan’s retail market is somewhat stagnating and with Amazon’s rise of online shopping, Don Quijote will have to make sure they stall relevant in todays climate and keep themselves in the mind of the Japanese consumer. However, Chief Executive Koji Ohara of Don Quijote does not seem too worried himself “If Amazon is like downloading music, we are like a concert venue. Both are needed”

Maybe focussing on what they know will prove the right path once again, it has saved them in the past during times of crisis. Although, the times are different now than they were 20 or even 10 years ago and with their recent expansions into other countries and a renewed drive within Japan different policies and plans may have to be put into place.

It would be impossible for me to even attempt to list all the wonderful items and goods you can find in Don Quijote. The pure range and vast array of goods they sell is awe-inspiring yet also intimidating, there is so much to try, so much to see, yet it is near impossible to ever experience all of it. I could spend hours just trawling the store looking for the perfect snack, the perfect drink, the perfect phone case, the perfect pen. Everything is present within the confines of the store, and if you can’t find what you are looking for then I would be thoroughly surprised. 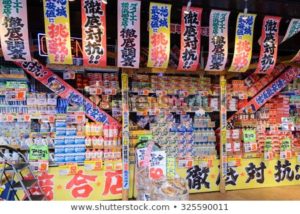 If you have not visited Don Quijote before then I suggest that you do, it is an experience unlike any other on this planet. Even if you are not intending on buying anything, then still go, as just being in the store is like stepping into a different world… and you’d end up buying something anyway, it is an impossibility that there would be nothing that catches your eye while in the store.

If you are looking for shopping in Japan then I encourage you to try Don Quijote’s, its got groceries, snacks, clothes, electronics, anything and everything you could need for living in Japan, and for cheaper prices then you are going to find anywhere else. While it may seem shocking and stressful at first, once you’ve found your feet there is no better store to be in. After spending a lot of time within Donki’s hunting for that perfect item, I can truly say that it is one of the most magical places on Earth.