You might already be familiar with the word “ume” (梅), plum, in Japanese. Plums offer some of the most interesting elements of Japanese cuisine, such as the pungent tasting umeboshi (梅干し pickled plum) and sweet and hearty umeshu (梅酒 plum liquor). But not only ume is delicious, but its plant offers some of the prettiest blossoms of the late winter season.

Plum blossoms differ from sakura in shape and structure, and come in a variety of colors, from white and light pink to vibrant fuchsia.

In this article, we will introduce the best spots to see plum blossoms in Japan.

Mito, in Ibaraki prefecture, is one of the favorite destinations to admire beautiful plum blossoms.

Easy to reach from Tokyo by train, the city hosts an annual “Ume festival” held in Kairakuen Garden, where roughly 3000 plum trees belonging to almost 100 varieties are grown, from early and mid to late bloom plants. The festival also offers a daily evening light-up event which is held from February to late March when the plum trees blossoms start to fall. 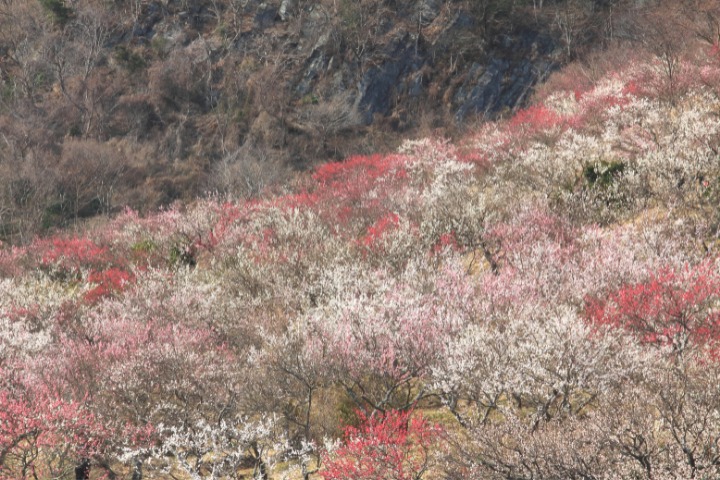 Annaka is one of the most famous places in Gunma Prefecture, having been renowned for its plum trees since ancient times. About 35,000 red and white plum trees are planted in the 500,000-square-meter plum grove that spreads out in the mountains along the upper reaches of the Akima River. White and pink flowers cover the entire area, and the faintly sweet scent of plum blossoms wafts through the air. The “Akima Plum Blossom Festival” is usually held from the middle of February to the end of March, and there are many teahouses and stalls where you can enjoy local flavors. This is a spot that satisfies eyes, taste buds, and hearts.

This plum grove, located on the western slope of Orihime Mountain, is open to the public free of charge every year from late February to mid-March during the blooming season. About 1,200 plum trees are cultivated on the 30,000 square meter mountain slope, and when they are in full bloom, the slope of the valley which is surrounded by mountains looks like it is covered with pink clouds. 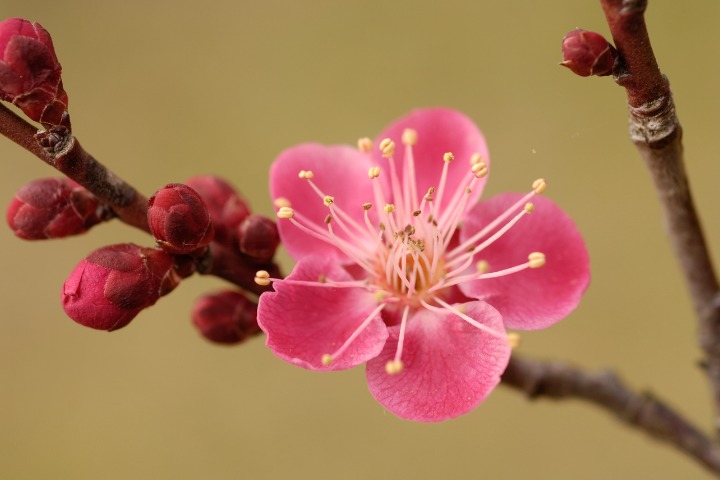 Even though this site is smaller in size, with about 500 red and white plum trees, it is worth strolling around the park admiring the many old trees with small, pretty flowers, to be transported into this tranquil atmosphere. On Saturdays and Sundays during the “Narita Plum Blossom Festival”, there are performances of shamisen and other traditional Japanese instruments, tea ceremonies, and umeshu.

This is one of the best plum groves in the Kanto region and is said to have originated from the first plum trees planted at Tenmangu Shrine in Fukuoka, which was moved together with the shrine from Kyushu to Saitama. There are more than 1,000 plum trees in bloom, including some that are more than 650 years old, and the grove is home to a great variety of plum trees, such as the white “kaga”, “echino”, and red ume. The best time to see plum blossoms here is from late February to late March when the plum blossom festival is also held. During this event, a small steam locomotive train runs through a tunnel of plum blossoms, a popular attraction among children and adults alike and a popular photo spot. 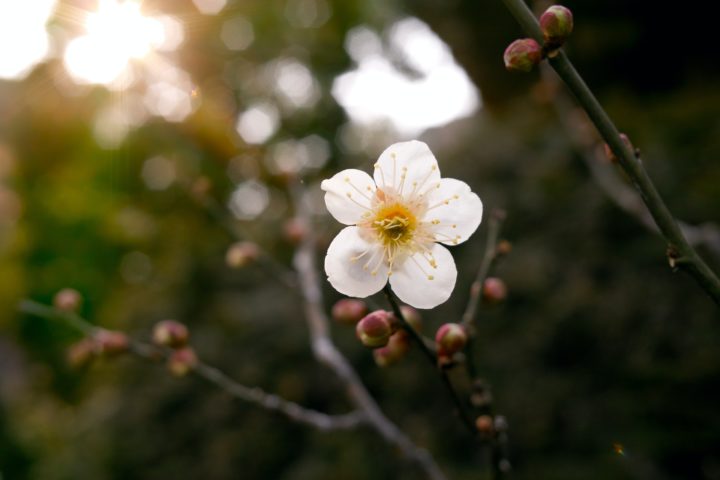 This is a sightseeing plum garden with 7,000 plum trees planted in a vast area of about 76,000 square meters. The park is located in a position where you can see the central Japanese Alps and the southern Japanese Alps, and the observatory is the best viewing spot where you can see the entire plum garden with Mount Kai Komagatake and Mount Kiso Komagatake on either side! The park is also decorated with 2,000 weeping peaches, double cherry blossoms, salsify, and other flowers.

Opened in 1897, this is one of the best plum blossom viewing spots in Yamanashi Prefecture. About 30 varieties of plum trees from all over Japan decorate the park, including “winter plum”, “kanko bai” red plum, and “kaiun” plum. The park is located at the foot of the mountains and a promenade leads the visitor through a maze of trees and strange rocks. In the end, there is an observatory deck from which you can see Mt.Fuji and the southern Japanese Alps. Be sure to check out the plum-related souvenirs, such as pickled plums made from the plums harvested in the park. 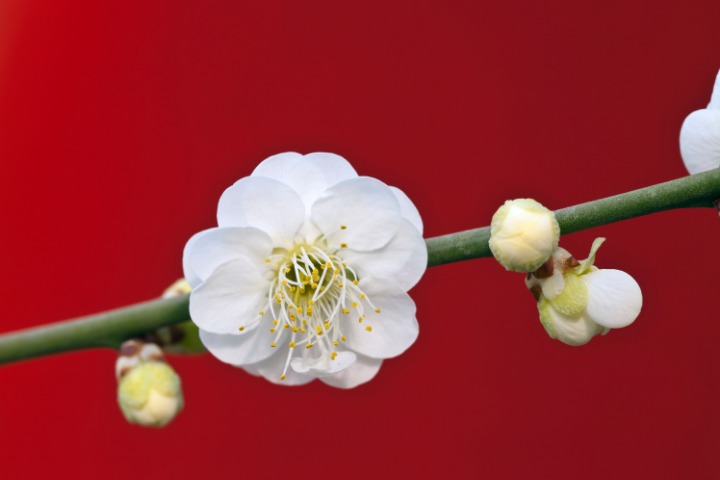 The park is open from mid-February to early March, and within its 130,000 square meters of grounds, visitors can admire about 3,000 plum blossoms, mainly white plums such as “nanko” and “kojo” varieties. Since the trees were originally planted to produce plums for plum wine, the plums here are still dried and processed at the nearby processing facility where products such as plum jam and plum syrup are made and are fairly popular among visitors.

This is one of the three major plum groves in Nara, which was first inserted in the List of Special Places of Scenic Beauty by the Japanese government in 1922. The plum grove spreads out on both sides of the slope of a deep ravine where the Nabari River flows through, and there are about 10,000 plum trees planted on a large scale. In the Edo period (1603-1868), the area was visited by a succession of writers and artists, and Matsuo Basho and Tomioka Tessai admired the scenery, and therefore a monument to their poems has been erected. The “Plum Blossom Festival” is held every year from mid-February to the end of March and is full of uniquely Japanese events such as a sencha tea ceremony, haiku contest, and rice cake making workshops at the Tenjinsha Shrine. 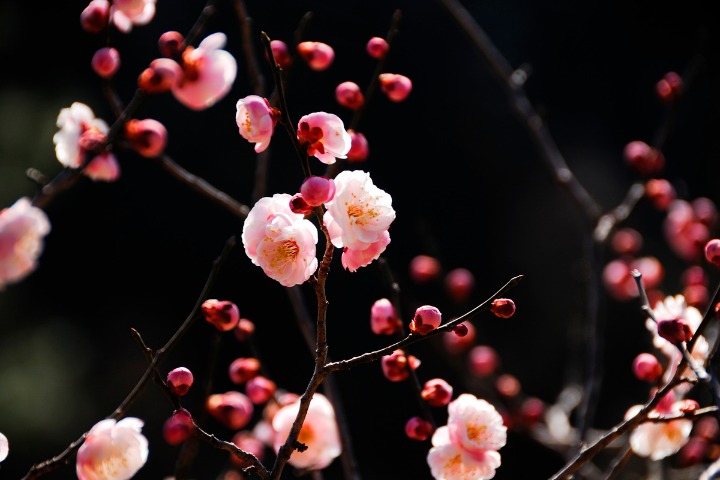 Make The Most of Japan’s Plum Blossoms

Japan is undoubtedly one of the best and most loved spring destinations for beautiful cherry blossom viewing. Visit early to appreciate and enjoy the early blooming plum trees from February to April at one of these great spots to see plum blossoms in Japan.