We’ve written before about interesting things that you may not know about Miyazaki prefecture but now, it’s time to take a look at one of its most appealing features – its natural beauty and stunning landscapes.

Miyazaki Prefecture is a Place of Wonderous Beauty

Miyazaki prefecture is blessed with abundant sunshine and a humid climate that gives the area a tropical feel. Throughout its history, it was relatively undeveloped industrially in comparison to some other prefectures and as such offers a lot in the way of forests, mountains and beautiful coastal views. Let’s take a look at some beautiful spots to visit in Miyazaki that show off its unique natural characteristics. 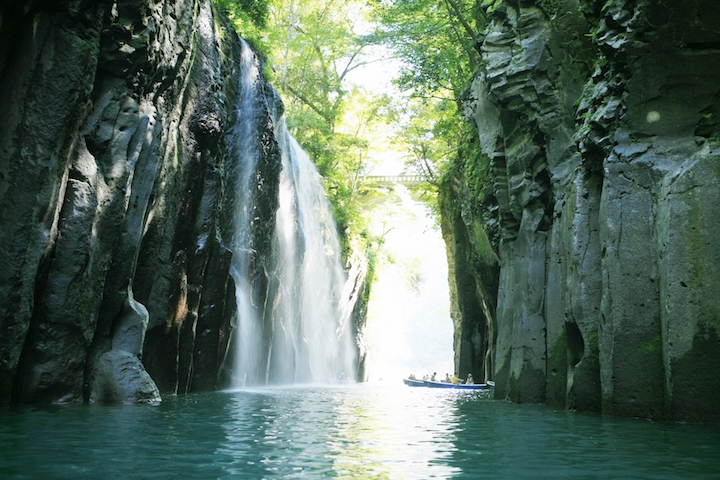 Let’s start with the most famous of Miyazaki’s travel destinations and the one that pops up any time you look up information about the prefecture: Takachiho gorge. This famous spot is linked to Japanese mythology and is said to be the spot where the grandson of the Sun Goddess descended from the heavens to Japan.

Located in the small town of Takachiho in the northwest of Miyazaki, the Takachiho gorge runs through a serene forest location. The gorge was created by ancient lava flows that rapidly cooled giving them an interesting shape like hundreds of columns propped up against one another. The Gokase river flows between the gorge and it’s very popular to hire a rowboat and row around the base of the waterfall that cascades into the gorge. It’s a beautiful spot that’s deservedly a big draw for tourists. 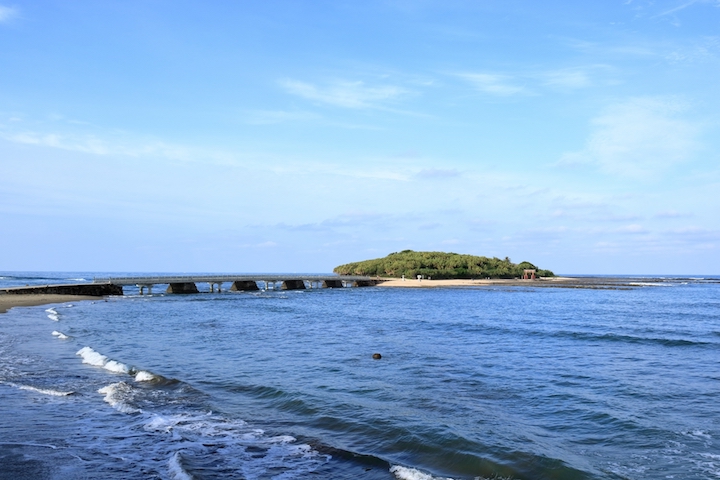 Another very famous spot in Miyazaki prefecture, this one located within the limits of Miyazaki city itself, is Aoshima island. This tiny island is connected to the mainland by a footbridge and is a popular destination for travellers. The island is home to a small forest in its centre that holds a beautiful shrine and is surrounded by strange rock formations running out into the ocean. These stone formations are known as the Ogre’s Washboard or Devil’s Washboard (oni no sentakuiwa).

Not to be confused with another famous Aoshima Island in Ehime prefecture (one of Japan’s famous “cat islands”), Aoshima island in Miyazaki is a beautiful scenic spot and the Aoshima area itself is like a small coastal village with several beaches and seafood restaurants. Because of its beaches and beautiful scenery, it’s also a popular surfing spot throughout the year. 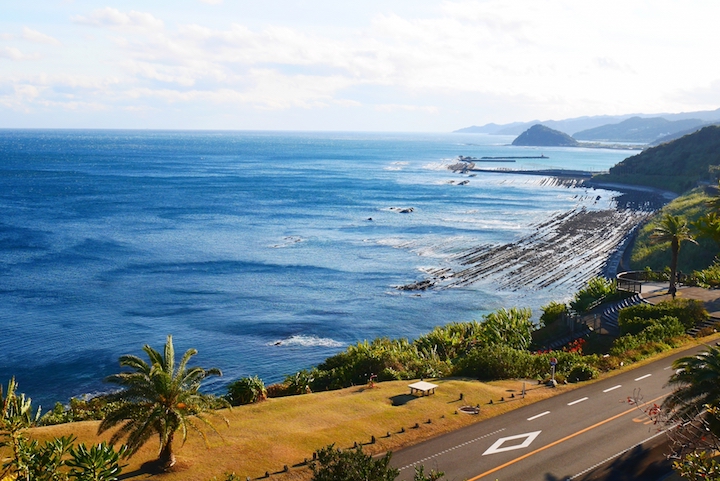 Running for about 120kms from southern Miyazaki along the coast to Kushima city is the Nichinan Coast Road (or Route 220 if you prefer). This road is one of Miyazaki’s best-kept secrets and is a beautiful drive, taking in some stunning coastal scenery along the way. As you travel down the road you can stop to visit various sightseeing spots including Udo Shrine, Sun-Messe Nichinan with its Easter Island statues and Cape Toi (see below). Alternatively, you can just bask in the mix of rugged coastline, beautiful ocean views and beaches dotted along the way.

Much of the area is designated as a National Park so you can experience the lush forest and mountains on one side and the ocean on the other. The only downside to the coast road is that it is best experienced by car so you may need to hire one to get the most out of it. 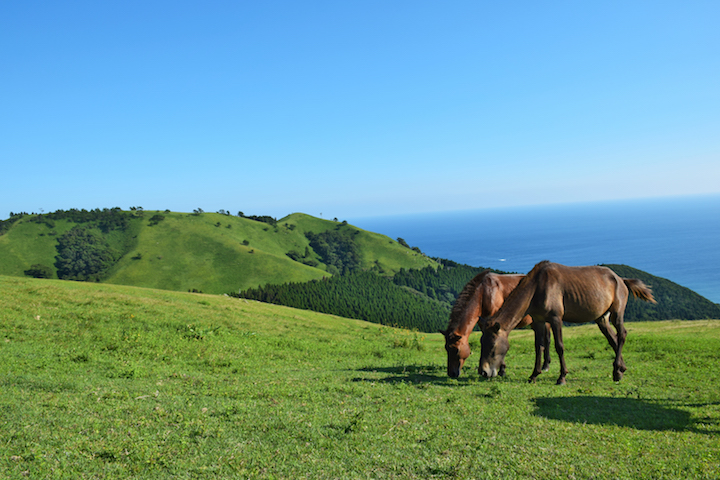 If you continue along the Nichinan Coast Road, you will eventually come to Cape Toi. This isolated little promontory is home to a small wild population of native Japanese horses and a rare chance to see them up close. Known as the Misaki horse, this particular breed originated in Miyazaki prefecture and for hundreds of years have been allowed to roam freely around Cape Toi.

The Misaki horse breed is an endangered species and is classified as a national treasure. The herd is cared for by being regularly monitored and checked for health and to cover the costs of this, there is a small fee to enter the area. The horses are for the most part used to humans and won’t immediately run away, however you are strongly advised not to approach them too closely for safety reasons. The area is also home to a visitor’s centre and Cape Toi lighthouse. 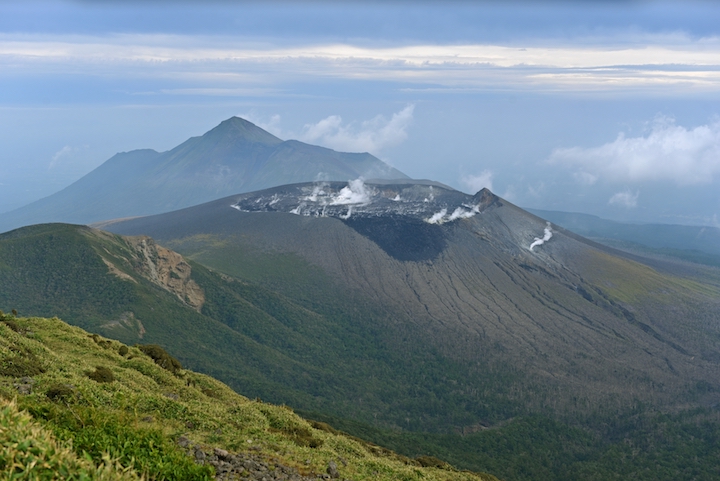 There are several mountains in the ranges that are popular to visit and climb with the two most popular for climbers being Takachiho-no-mine and Karakuni-dake. Takachiho-no-mine is known for its red, otherworldly appearance as you climb it and has a small shrine at the top holding a giant spear thrust into the earth. Karakuni-dake is best accessed through Ebino city in Miyazaki and is the tallest of the mountains, providing spectacular views of the surrounding landscape including Shinmoe-dake, a fairly active volcano that you can see smouldering in the distance. 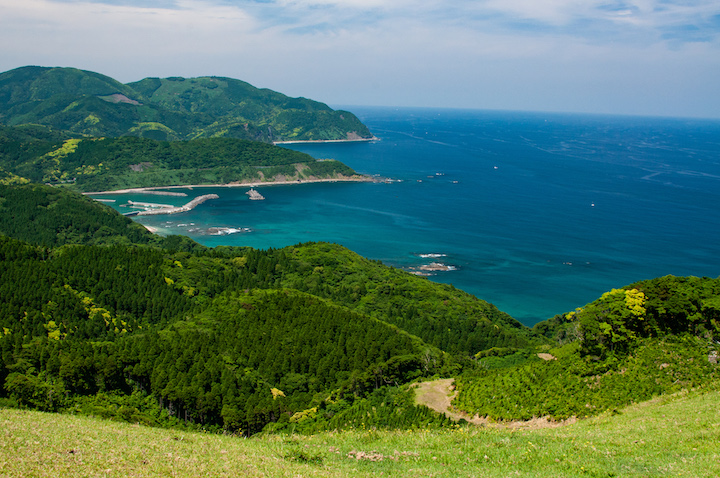 In this article, we’ve taken a look at some of the natural sightseeing areas that Miyazaki prefecture has to offer. Even though it can seem a little out of the way, Miyazaki has a lot to offer nature lovers. If you’re looking for somewhere new to travel in Japan, it’s highly recommended.