Nokogiriyama, a 2-hour train journey from central Tokyo, is located in Chiba, and stands at an elevation of 330 meters. At its summit, a vertiginous ledge offers a breathtaking view of the Boso Peninsula and Tokyo Bay.

The 3 Spots Not to Miss in Nokogiriyama

The mountain is known for its distinctive sawtooth shape slopes, the Nihonji Temple located at the top, and the “Jigoku-Nozoki” (that literally means “Peak into hell”) lookout point overlooking Tokyo Bay.

How to Get to Nokogiriyama

From Tokyo station take the JR Sobu line to Kimitsu station. Transfer to the Uchibo Line and get off at Hama-Kanaya station. This takes around two hours and costs roughly 2,000 yen one way.

You can also get to Nokogiriyama by ferry: catch it from Kurihama Port, just a bus ride from Keikyu-Kurihama Station (easily accessible from Yokohama with the Keikyu line). Taking the ferry is the most convenient way if you are living or staying in the southern side of Tokyo and it is also a fun way to get a different view of the bay.

From the station, you can either jump on the ropeway close by or take one of the trails and hike up the mountain to the Nihonji temple. There are two main routes up to the top, each taking one hour to reach the top.

Nokogiriyama, literally “Sawtooth Mountain”, gets its name from the sawtooth-shaped ridges along the mountain, created by stone extraction in the Edo period. The stone extracted from the mountain would be used for building materials. 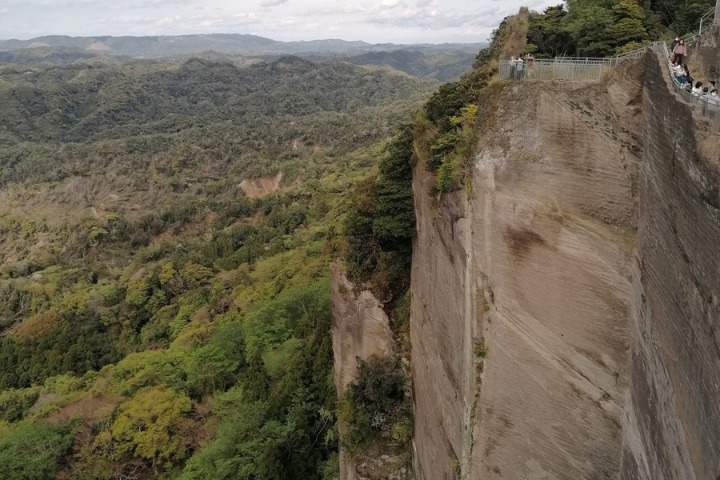 Being one of the most popular spots in Nokogiriyama, the viewpoint offers a breathtaking view of the surrounding peninsula and Tokyo Bay, and, on a clear day, you can see as far as Mount Fuji.

Nihonji was built by the order of Emperor Shomu in 725. Over the centuries, it passed through the hands of various religious groups before suffering significant damage during the anti-Buddhist “haibutsu kishaku” movement between 1868 and 1874 during the Meiji modernization. “Haibutsu kishaku” is a term that indicates a current of thought that wished for the abolition and the expulsion of Buddhism – or any kind of religion – from Japan.

Because of their abolitionist principles that rejected the influence of religion, members of the group led raids on the mountain to destroy and behead Buddha effigies. Even today, this temple offers poignant evidence of this social and religious revolution, for one can still see many significantly damaged statues.

The temple grounds are spread out in different locations along the mountain slopes, but the most significant points of interest are located towards the top: the statue of the seated Buddha and the statue of Hyaku Shaku Kannon. 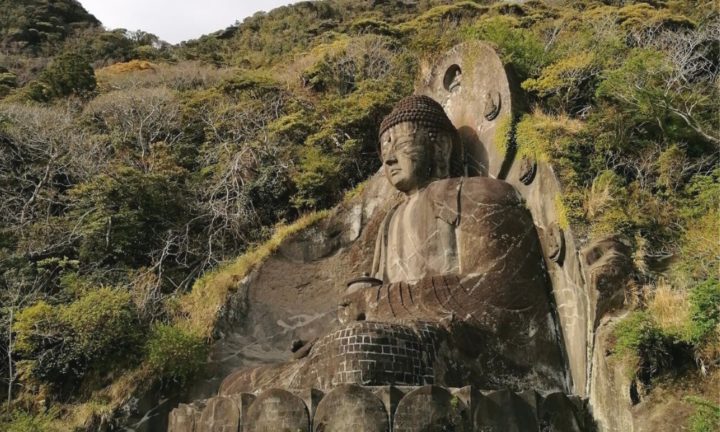 The undisputed star is the seated Buddha statue “Ishi daibutsu,” built in 1783 by sculptor Jingoro Eirei Ono and his craftsmen, which stands about halfway between the base and the summit of Mt. Nokogiri.

The name means “the great stone Buddha,” because it is carved within the cliff itself. With a height of 31 meters, it is the largest stone statue in Japan representing the seated Buddha.

Towards the top of the mountain, you will then stumble upon the statue of Hyaku Shaku Kannon. This statue, contrary to the ancient origins of the temple, was carved into the mountain only in 1966 and it is dedicated to those who died in wars.

Apart from these two statues, which are unequivocally the main attractions of the site, while climbing around, you will have to chance to see countless Arhat (someone who has reached enlightenment) statues (around 1500 to be precise) populating the trail, many of which are damaged or decapitated as explained before.

Take the ropeway back or climb down the mountain and stop to try some local seafood for lunch in one of the many establishments around the station, from fresh sashimi to thick-cut deep-fried horse mackerel. Or grab a bento at the station or on the way, or maybe pack your lunch beforehand and enjoy a picnic in the mountain.

Enjoy a Day Trip to Nokogiriyama from Tokyo 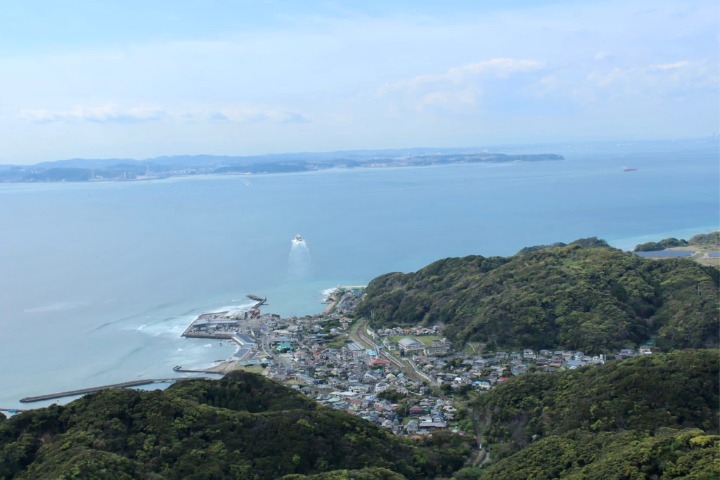 Head over to Nokogiriyama even for just a day trip from Tokyo, to enjoy nature, beautiful views and Japanese history and culture.

Read all about hiking in Japan, so you’re prepared!

Hiking in Japan: Preparation, Equipment & the 7 Best Trails in Japan!

Kamakura has some wonderful hiking trails too!

Things To Do in Kamakura: A Weekend Guide

Or do you prefer camping instead?

Basics on Camping in Japan