With unique structure and culture, the Japanese shrines are always great attractions to both locals and foreigners. When mentioning Japanese Shinto shrines, one can never skip the Itsukushima Shrine – a historical place with wonderful features in an exotic location.

Itsukushima Shrine lies on Miyajima Island in Hiroshima prefecture. The shrine was considered one of the most spiritual and oldest religious sites in Japan since it dated all the way back to the year 593. The shrine is also a UNESCO world heritage, not only for its attractive architectural design but also for being a symbol of purity in the religious world. 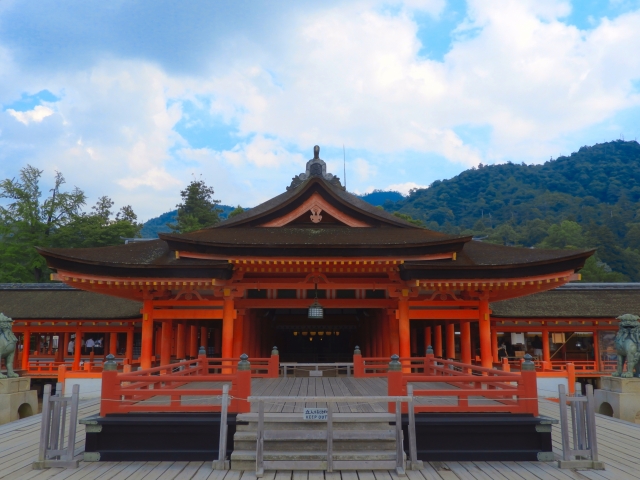 Three goddesses are enshrined here on the island:

These three deities are the three princesses descended directly from Amaterasu, the Sun God. Amaterasu is believed to be the main Deity to whom the Japanese Imperial family was related, so the branch of the royals who resided in Hiroshima was confident about the blood connection between these goddesses and them. The three goddesses are told to look after and bring blessings to them, especially for peace during their sea travels. 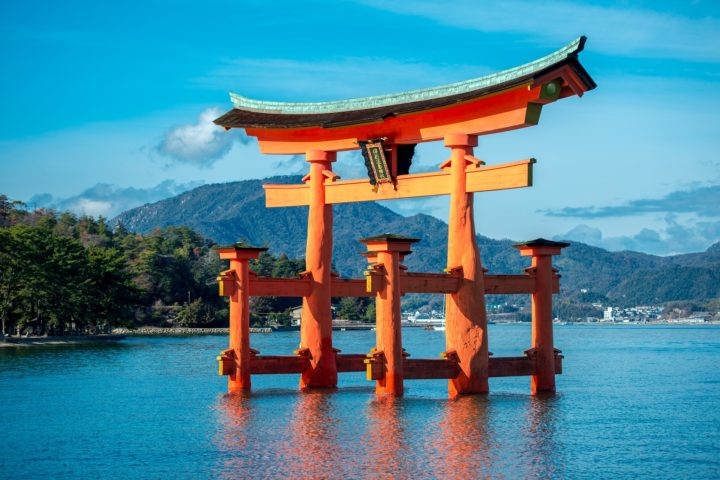 A large vermilion torii gate is the first sight for visitors when approaching the shrine. The bright red color is extremely signature for Japanese torii gates since it helps prevent decay and keep the evil spirits away. In Japanese mythology, goddesses are related to water, which makes this gate even more special as its standing right in the middle of the ocean. This one-of-a-kind position helps make the gate look like a boundary between the precious, sacred place for kami (Japanese Shinto gods) and the ordinary human world.

Surprisingly, the huge torii is not buried deep in the seabed but is standing on its own weight. Four smaller pillars support the main one and hold it in place. All the pillars were made from naturally grown camphor trees to prevent rotting and protect the gate from insect invasion.

The great torii can change its appearance between the tides and between day and night time. When the water level is high, visitors can experience the mighty view of the vermillion gate contrasting the deep blue of the ocean. When it’s the dry season, visitors can approach the gate on foot and stand right below it. The torii is also illuminated after sunset. 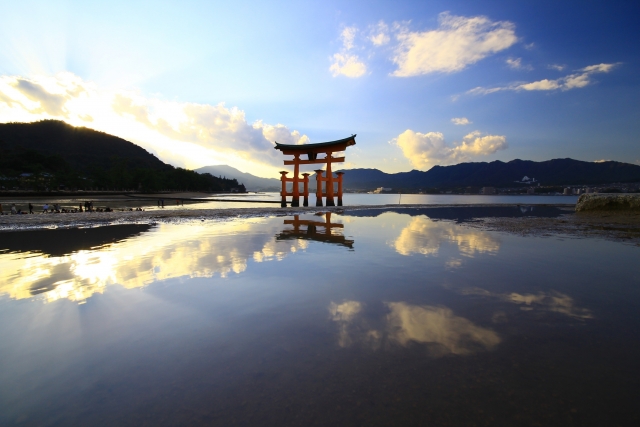 It is undeniable that purification is one of the important characteristics of Japanese Shinto, and at Itsukushima shrine, it receives even more attention. This is because the shrine was constructed on a separate island, so many believed that this place was chosen to hinder their kami from being affected or polluted by humans or devils.

In the past, very access to this shrine or this area was limited to protect the purity of the shrine and creatures in the region. And, of course, tourists were completely prohibited. Even priests did not live on the island but instead arrived by boat only on special events to perform rituals. Gradually, a small number of people were allowed to live on the island due to a need for regular management of the temple. It was not until the Edo period that Itsukushima became popular with tourists and opened to the public.

Nevertheless, rules are still being maintained to keep the area from pollution. Since the 19th century, deaths and births on the island have been banned since these human activities are associated with spiritual pollution. Moreover, pregnant women near their delivery date and elderly people near their time are also asked to leave; and no burials can happen Itsukushima Island.

Bugaku dance is a famous ritual at Itsukushima. This ancient court dance has been handed down through generations and become an important element in festivals. The dance includes a mix of dancing forms which were imported from Asian countries such as China and Korea and adapted into high-class entertainment for the Japanese emperor and aristocrats.

It is divided into 2 forms based on origins, costumes, and the accompanying music. The first one is “Dance of the Left” (saho no mai) which originated in China. The other is called “Dance of the Right” (uho samai no mai) which came from Korea. This dance was created with repetitive symmetric movement, which reflects the Hindu – Buddhist idea of the continuation of the universe. Even though Bugaku was imported from other nations, Japan is the only country that still conserves it today.

Two alluring annual festivals held at Itsukushima shrine are the Toka-sai (Peach Blossom Festival) and Kikka-sai (Chrysanthemum Festival), both of these are Bugaku dance performances.

The Kiyomori festival is also a ritual festival on Itsukushima island that is famous world-wide, and includes a parade and celebrations.

For more details and for information on how to get there, follow this link.

I am Chi and currently a college student at Tokyo International University at Japan. Just like many of you guys, when I first started life in Japan, it was very difficult because of the language barriers and culture differences. However, through time all the problems can be solved and I have learnt many great things in this Country of the Sunrise. I hope to share my passion in travelling and culinary art with everyone, as well as my humble knowledge and experience while staying in Japan.