The city of Aso, Kumamoto, is full of culture, activities, and natural phenomena. Get up close to the active volcano, go mountain biking on the mountain plains, horseriding on pastures, visit the shrine that is said to protect the caldera. There is so much to do!

Aso is dominated by Mount Aso, one of the largest volcanic calderas globally and the most active volcano in Japan. It is an area of exquisite natural beauty, surrounded by mountains on all sides. It’s said the five volcanic peaks line up perfectly to form a sleeping buddha silhouette, a sight not to be missed.

How Was Mount Aso Volcano Formed?

The area, known for its spectacular views and beauty, is named the Aso Kuju National Park. With a history of nearly 300 thousand years, the caldera is certified as a UNESCO Global Geopark. Four huge eruptions between 270,000 and 90,000 years ago helped with the formation of the caldera. The eruptive activity released a large amount of underground magma to the surface, which created a large space underground. This caved in, and the Aso caldera was formed. Out of the five peaks, the most active is the Nakadake crater, which constantly emits a column of smoke and is closed off from visitors during high activity. With a span of 25km and 50,000 people living in the caldera spread out between six towns, it is one of the world’s largest inhibited calderas. The “Daikanbo” elevated at 900m offers the best view, and it is from here you can see the reclining buddha silhouette.

Take a Trip to Aso, Kumamoto 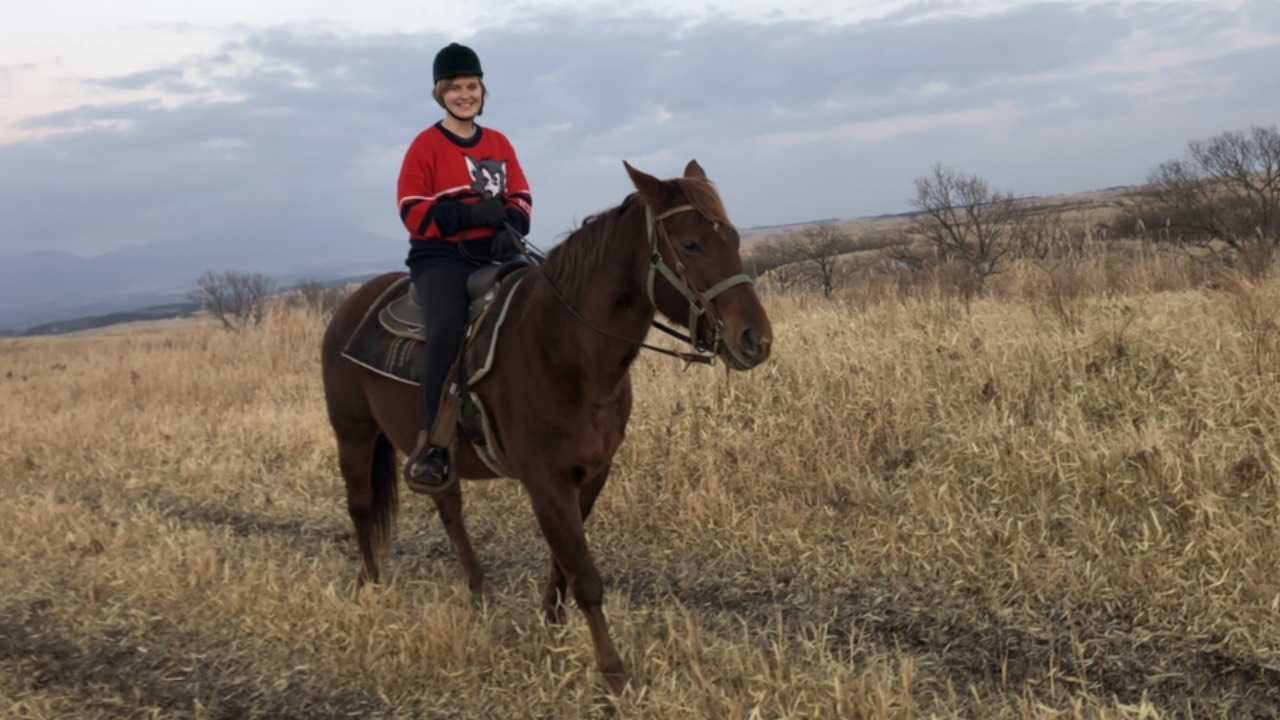 I interviewed German Youtuber Maxie about her recent trip to Aso, Kumamoto. Maxie is a translator/interpreter who shares tips about Germany and the German language on her Youtube and Twitter and teaches German lessons online!

Maxie was thrilled to tell us all about her trip and her favourite moments of the tour. Maxie joined a 3-day tour produced by ASO Caldera Tourism.

I arrived at Kumamoto airport, and we were chartered to Aso city. Kumamoto Prefecture is a wonderful place, known by many for its mascot Kumamon. Surprising then to find out that there are no bears in the prefecture, the idea behind the mascot comes from the name only!

Aso lies in Mount Aso caldera, surrounded by mountains. And is also called the “home of natural mineral water.” A sedimentary layer formed from volcanic eruptions filters the water naturally that falls in the area. This water, stored underground, becomes delicious spring water that is used for domestic and agricultural uses. I had the chance to taste this delicious water after arrival with a water bottle provided for me; the tour aims to promote sustainable tourism as much as they can.

First, we visited Aso-jinja Shrine, which looks out towards the mountain. We learned about the ancient volcanic beliefs and how the shrine protects the city. The Aso-jinja Shrine is more than 2,000 years old, and people have worshipped agricultural deities here since ancient times. Several different fire Shinto rituals have been taken on by the Shrine as people in Aso honor the volcanic crater’s fire. Such rituals include the shrine’s spectacular Hifuri Shinji ritual, the Hiwatari (Japanese for “fire-walking”) ritual of Saiganden-ji Temple and the Shimomiya Hitaki Shinji ritual of Shimo-jinja Shrine. If you visit in Autumn, you can see the important annual good harvest ritual called the Onda Festival.

The food we had this day was so good! For lunch, we ate the famous grass-fed beef, which was so soft and delicious. I also tried an uma croquette (horse croquette) while walking around the Monzenmachi shopping street, which tasted amazing!

In the Aso Kuju National Park, we got the chance to experience some outdoor activities. It was interesting to learn about first-aid from the Park Ranger, and the ninja tour was really fun. We even made our own bamboo knife that we could keep. 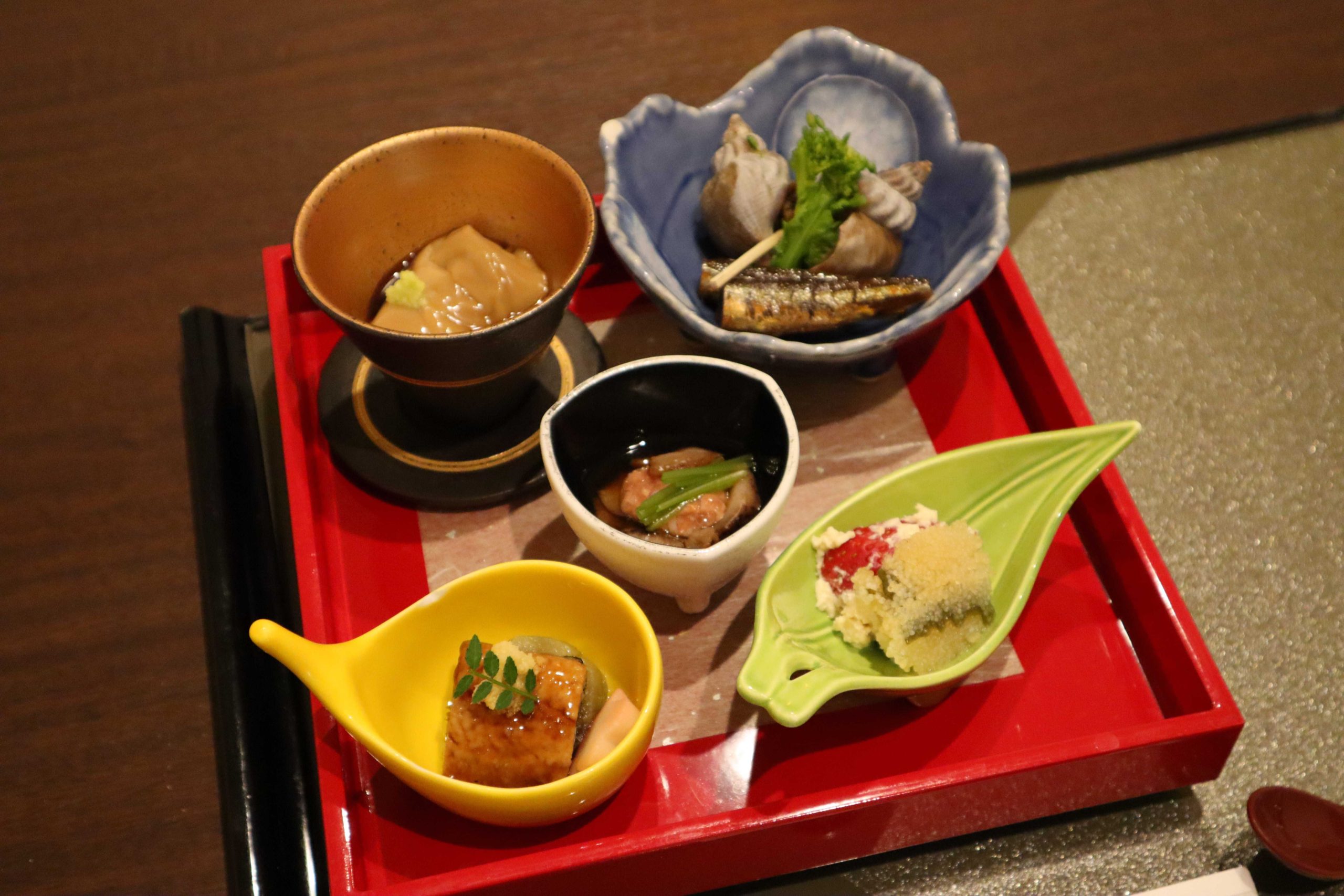 All the outdoor activities worked up an appetite, and we were treated to a dinner made from local Aso produce after we arrived at the hotel. The meals were traditional Japanese-style and displayed beautifully. We stayed at the Uchinomaki Onsen Aso Hotel Nibankan, a comfortable hotel with fast Wi-Fi, friendly staff, and a natural onsen. I love onsen and relished soaking in the outdoor bath, overflowing with natural hot spring water, drawn directly from the source.

But if you’re not into the communal bathing scene, there are showers in the rooms too. The room I stayed in was western-style, but they have Japanese-style with futons too.

Today was a day mountain bike tour of the pastoral areas at the foot of the Aso mountains. The mountains’ views are spectacular, and the local guide showed us the best routes to ride safely. This was one of the trip’s highlights; it was so fun to speed through the fields. The mountain bike tour is available throughout the seasons, even in the snow, which must be magical. They have regular mountain bikes and e-bikes with a motor for people who are not as confident with their riding skills, so it’s perfect for families. 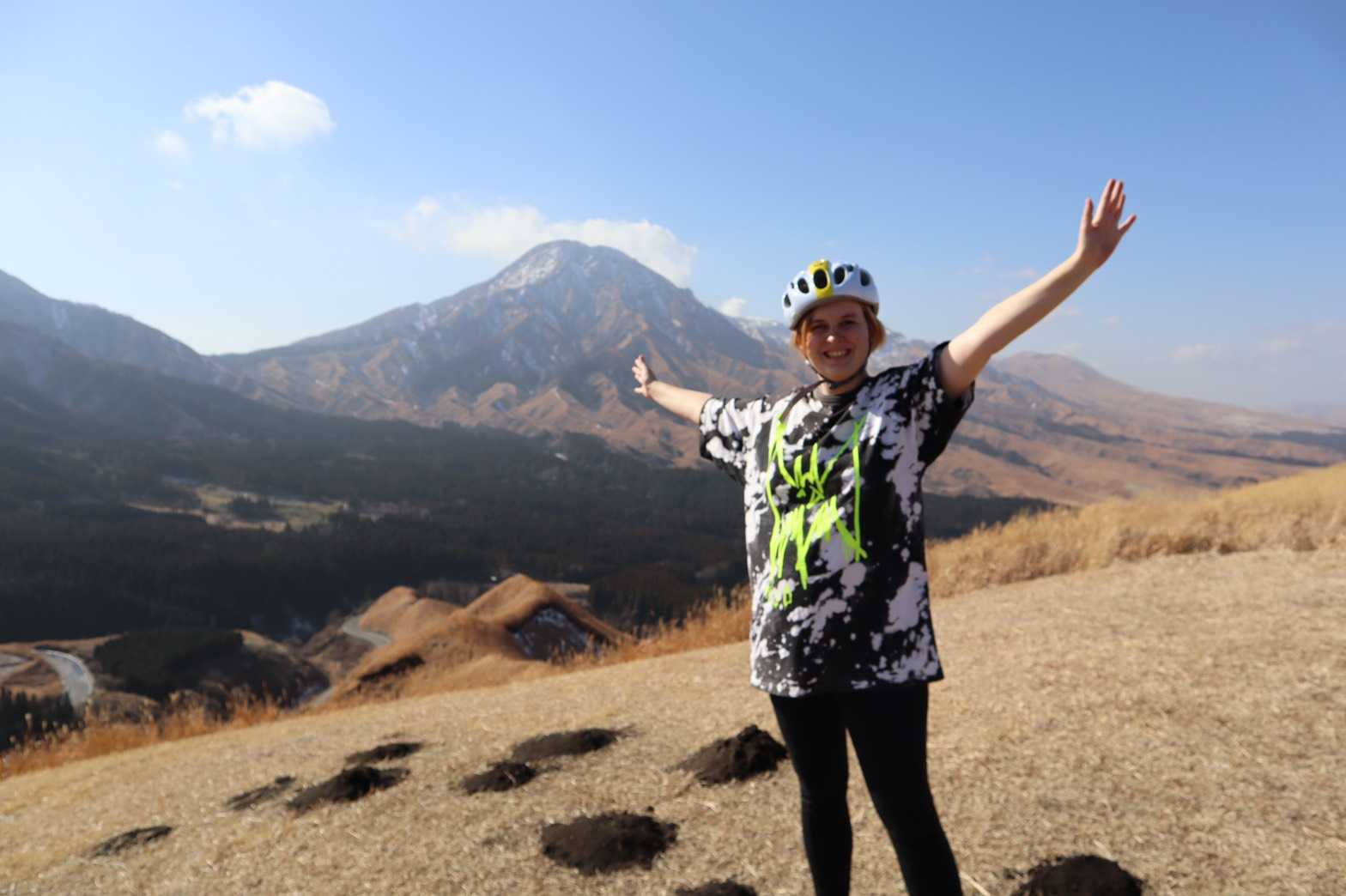 We had lunch in an outdoor camping setting with perfect views of the mountain. The lunch tent was fun to help erect. And the lunch was filled with local produce, the fresh yogurt was especially good and the coffee! We had time for more biking after lunch too!

Later in the evening, we went on a horse-riding trip. It was my first time riding horses, so I was a bit intimidated, but the horses were very friendly and well-trained—the horse handler trained in Texas and was very knowledgeable about horses. We walked through a vast landscape with the horses, and they could walk around freely. Walking around the pastures in the sunset around the mountain’s outer rim was a very peaceful, humbling experience.

Day 3: Getting Up Close to the Volcano

Day three was spent exploring the active volcano! It was interesting to learn about the history of the area and the ancient volcanic activity that formed the caldera. Local people and an Aso Geopark guide helped us on our journey and guided us through the volcano experience. We walked around the Yonesuka area, an area usually inaccessible, and visited a lava tunnel. Inside the tunnel sparkles gold and silver with the minerals, it was stunning, going into the hole was really fun.

We went to the top of the mountain and saw the active volcano. You can’t see the magma itself during the day (sometimes you can at night), but you can certainly see the emitting gas. It is difficult to visit an active volcano, so I was awed by the experience. It was made very real by the occasional places with barriers to hide in case of an eruption!

After the volcano, we went to a farmhouse in the nearby village where we had a traditional lunch. Afterward, we were guided around a local village to see the local life of people living near the mouth of the caldera. Back around Aso train station, I enjoyed some delicious ice cream. After seeing so many cows around the caldera, it’s easy to understand why the dairy products in Aso are so creamy and fresh. 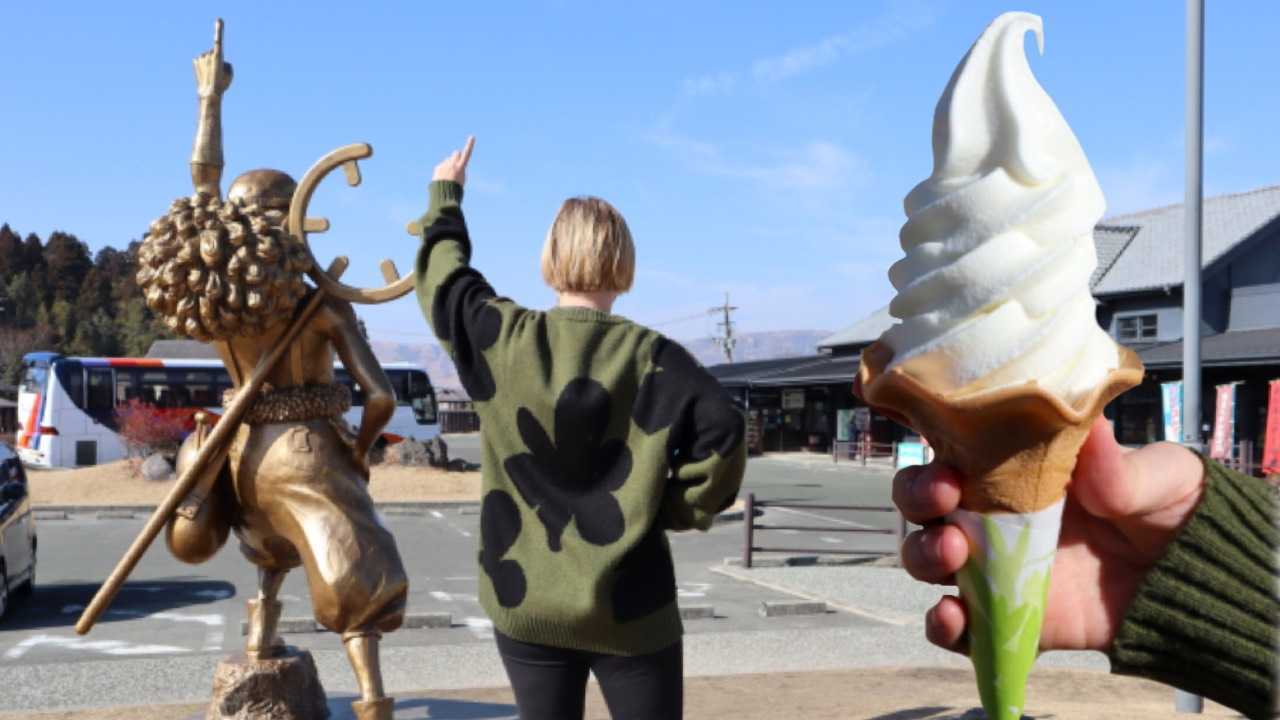 And that’s where the tour ended. We were taken to Kumamoto airport and I was sad to say goodbye to Kumamoto Prefecture. I loved sightseeing around Aso and would love to come back again. I would especially recommend the mountain bikes and the volcano tour, these were definitely my favourites, along with all the delicious food I enjoyed on the trip!

Thank you Maxie for telling us about your trip to Aso, Kumamoto. I certainly can’t wait to take a trip myself and see the active volcano’s power first-hand.

For more information about Aso, check out the links below: