One Day Trip To The Snow Monkey Park From Tokyo | Guidable

One Day Trip To The Snow Monkey Park From Tokyo

If you’ve ever watched any nature documentaries or perhaps are just a fan of monkeys, you’ve probably come across those of the Snow Monkey Park (地獄谷野猿公苑 jigokudani yaen koen).

These famous monkeys (Japanese Macaques) spend the warmer months frolicking around in the mountains, enjoying the wide variety of plants that grow throughout the valley and the colder winter months relaxing in and around the hot springs.

A History of the Park

Jigokudani (地獄谷), which translates to ‘Hell Valley’ in English, was named for its steep inclines and hot water fountains (in Japan, the name ‘Jigokudani’ usually refers to places that see a lot of volcanic activity).

And whilst it’s now known for its bathing snow monkeys, they weren’t officially known to enter the onsen until 1964!

In 1970 the park made the cover of LIFE magazine and since then has begun attracting tourists from all over the globe who come to see the monkeys bathe.

What’s more, according to Jigokudani Monkey Park’s official website, this is the only place in the world where monkeys spend time in hot springs! 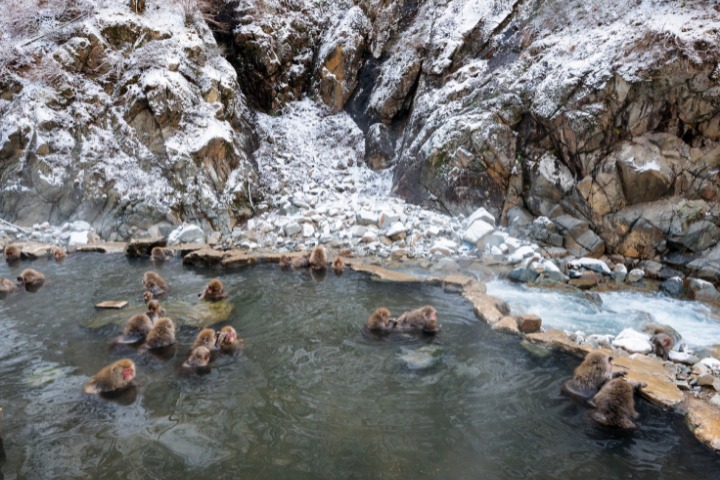 Getting to the Snow Monkey Park

There are several ways to get to Nagano from Tokyo. The most obvious is probably via shinkansen. However, you can also get there by express bus or car.

(I don’t recommend travelling to Nagano by car during the winter unless you have got proper snow tires and training, as the roads can become very dangerous).

For those like me, who are always looking for a convenient way to get there without having to spend an arm and a leg on a bullet train, I recommend getting the night bus (夜行バス yakou basu).

The main reason is that it is a lot cheaper than both the daytime highway and shinkansen, and it gives you a chance to sleep on the way there! 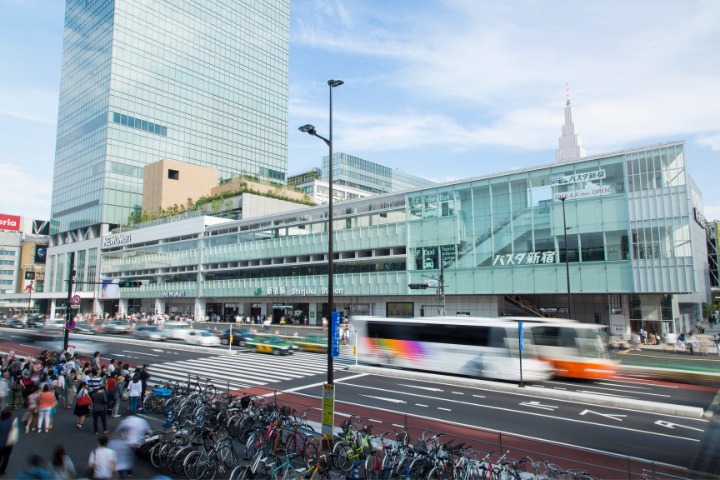 There are many options for getting the night bus. However, I went to Nagano using the Willer Express bus from the Shinjuku Bus Terminal. The whole journey took just over five hours, including two service area breaks where we could get off, use the bathroom and spread our legs.

For our peace of mind, there were measures in place to prevent the spread of COVID-19, such as obligatory mask-wearing and partitions between chairs.

However, the partitions made the window seats feel smaller than they were, so I don’t recommend booking a window seat if you’re not a fan of small spaces!

Once you have arrived at Nagano station, you’re already over halfway there!

From here, there are two main options for reaching the park; the first via train and the second using an express bus. 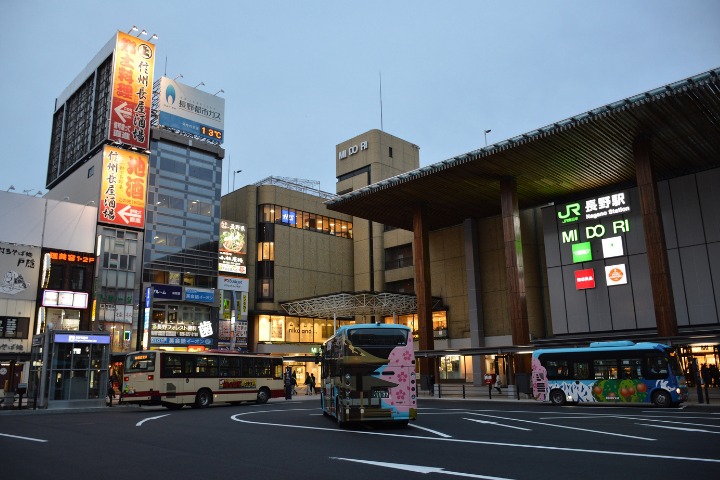 Getting the train involves taking the Nagano Dentetsu train from Nagano Station to Yudanaka Station before changing to a local bus or taxi where you will need to get off at the Kanyabashi Onsen stop or the Snow Monkey Park bus stop. Either way, you will need to walk for around 40 minutes to reach Jigokudani Monkey Park.

The good thing about getting the train is that you have more flexibility in coming and going, as local trains and buses are more frequent than express buses. It’s also a great chance to explore Shibu Onsen town, which is full of local onsen and traditional Japanese buildings; it’s the perfect place to relax in a hot bath away from the cold or even as the backdrop for some photos! 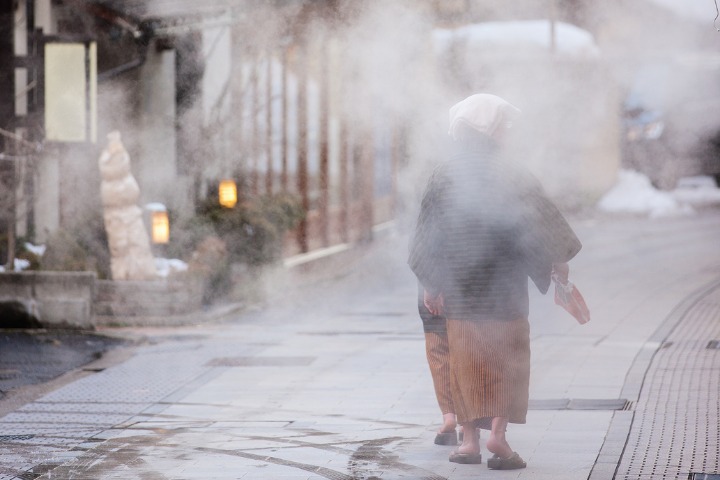 The express bus is the better option for those who don’t want to change multiple times. If you go via express bus, all you need to do is get the bus from the East Exit of Nagano station (pay at the bus stop), which takes you directly to Kanyabashi bus stop, and from there, you will need to walk for 40 minutes to the park.

If you are in Nagano for more than a day, I recommend getting the Nagano 2 Day-pass for 3,500 yen, which includes unlimited use of the Nagaden bus, train and express bus between Nagano Station and the Snow Monkey Park, as well as entry into the park itself.

However, the pass can only be bought and used during a few specific months of the year, so make sure to check in advance! 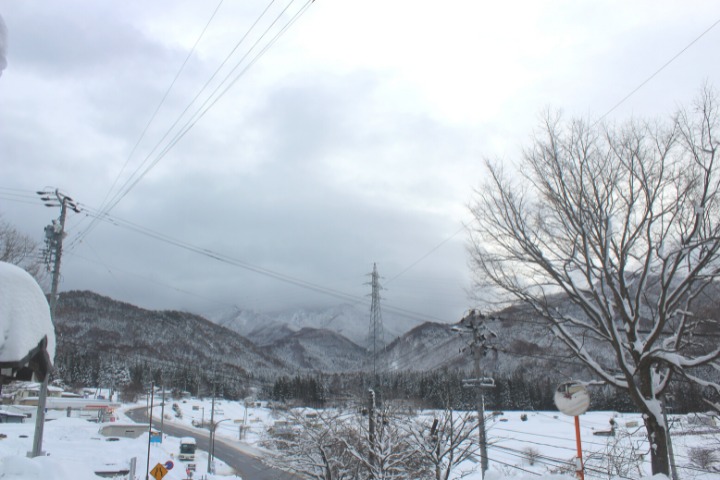 Once you have reached the bus stop, it’s a 40-minute walk to the park. The first 10 minutes includes walking to the entrance from the bus stop, at which point there is a small gift shop and a place to rent snow boots, coats and gloves amongst other things, so if you’ve forgotten something, don’t worry! 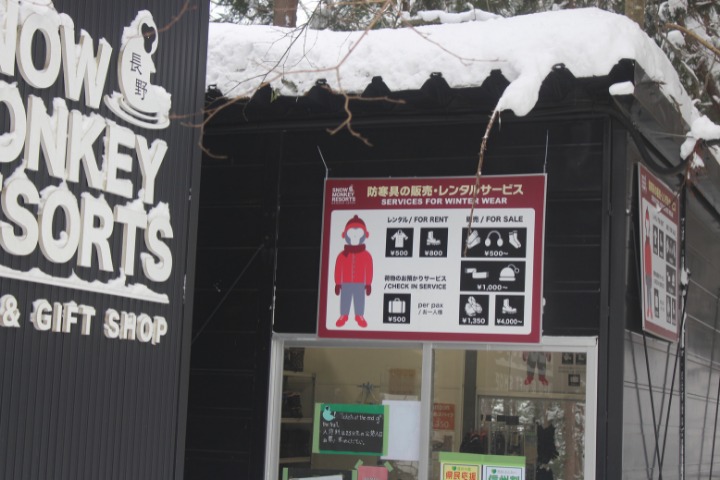 After the entrance point, it’s a 25-20 minute walk through a snow-covered forest. Try not to slip!

When you’ve made it to the park, you will need to buy a ticket before entering, which was around 800 yen for an adult ticket, but lucky for us, there is no limitation on how long you can be there!

Wander and enjoy the unique sight of these Japanese macaques soaking in an outdoor onsen or playing around in the snow, but make sure not to use flash if you’re taking photos, not to get too close, not to feed the monkeys or make extended eye contact with them!

Although bathing with the monkeys at the park isn’t allowed, you might be able to try your luck at Korakukan Onsen (the places where the monkeys first began bathing in the hot springs), where the snow monkeys may join you in the open-air onsen. However, this may not be the most hygienic experience!

Back at the park, if you’re lucky, you may be able to catch sight of more than just the monkeys playing around the park. During our time there, we were lucky enough to spot a deer on the other side of the river that runs through the valley, so make sure to keep an eye out! 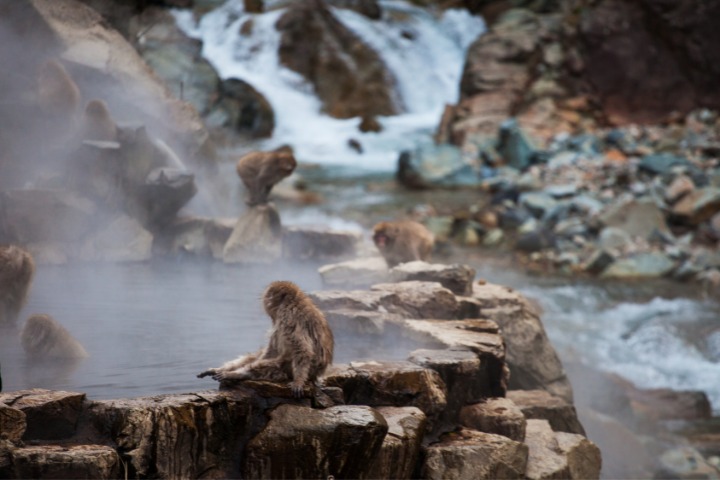 Once you’ve felt the cold weather catch up to you, you can head inside to the small gift shop to warm up and get a small souvenir to remind you of your time at the park, or you can go back to the bus stop and try exploring Nagano! There are so many things to do in the city, like visiting the Zenkoji temple, that you’ll be wishing you had more time to explore!

Whilst the Snow Monkey Park is a beautiful place to visit year-round, there is something special about being able to watch the monkeys play around covered in snow whilst relaxing in an onsen!

However, even if you aren’t able to make it during the winter, it should still be on your list of places to visit in Japan, as you can still catch some amazing sights like the newborn monkeys in the spring or the beautiful foliage in the autumn!

So, how about a trip to Jigokudani Monkey Park this winter?