Where to Go on Vacation? (Part 4): Kyushu Region | Guidable

Where to Go on Vacation? (Part 4): Kyushu Region

Part 3 introduced to you guys all the recommended spots and things to do in the Chugoku region. In this part, Let’s move to the southern part of Japan, the Kyushu region, which is famous for its hot springs (onsens) and beautiful natural landscape. Maybe not so many people know about this region so let me guide you to discover all the attractive tourist destinations and things to do while traveling to Kyushu region with families or friends. As a result, you can easily control and change your itinerary in details. Now let’s begin. 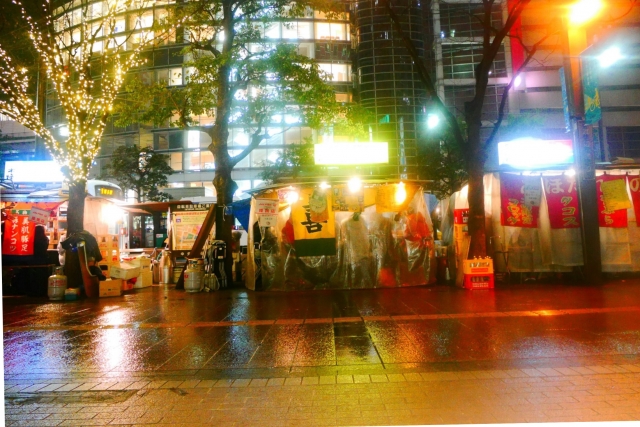 Yatai street is the name given to the street in Fukuoka where more than 100 food stalls are located. Those small stalls serve many kinds of really delicious and cheap street food, which lead to the area being enlisted in the Asia’s greatest street food cities in 2013’s top ten. Through having meals inside stalls, you will have the chance to enjoy insightful conversations with stalls’ owners or other customers. Be sure not to stay for a long time or come there with big groups because stalls do not have enough seats for all diners to sit.
Working hours: 18:00 – before daylight
How to access: To reach the row of stalls on Nakasu Island travelers can take the convenient 100-yen loop bus from Hakata Station or Tenjin Station (100 yen, departures every 5-10 minutes). The closest subway stations are Nakasu Kawabata Station and Minami Tenjin Station, which are both about a 10-minute walk away.

Canal City Hakata is a huge shopping complex which contains many shops, cafes, restaurants, cinemas or entertainment places. In this shopping center, you can browse the shops and try local Japanese cuisines. For example, you should try to eat local Hakata Ramen to know more about the local area’s style of food. Inside the complex, there is a decorated artificial canal that flows along buildings and at each half an hour, the fountains in canal spout streams in time to music for entertainment. 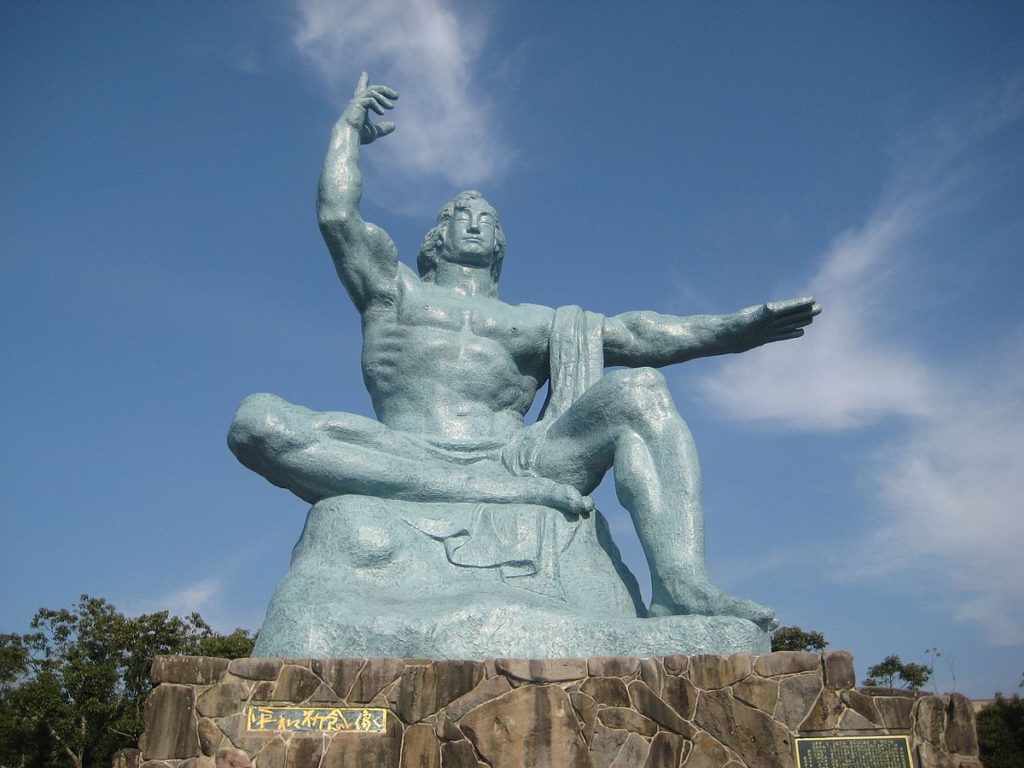 On August 9th, 1945, a nuclear bomb was dropped on Nagasaki city, the second nuclear explosion in Japan after Hiroshima. The explosion caused enormous damage to Nagasaki city, and hundreds and thousands of people were killed or injured. Nagasaki Peace Park was established to memorize the victims and to show the dangerous effects of a nuclear bomb to the public. The most famous spot in the park is the Peace Statue whose right-hand points out the danger above while the left hand symbolizes peace.
How to access: 4-minute walk from Matsuyamamachi tram stop. 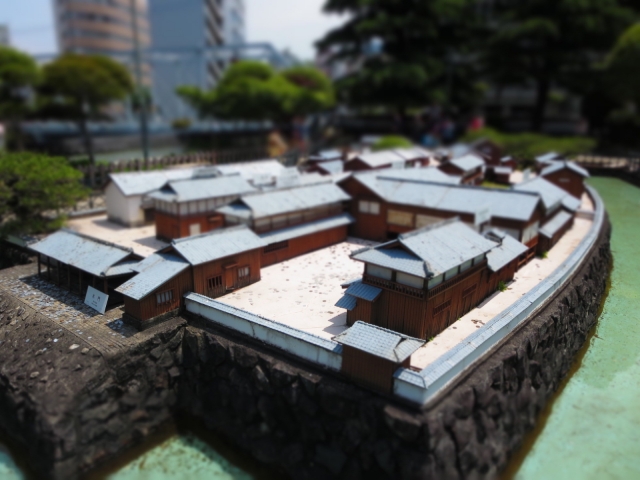 During the Edo period, Japan closed its border and did not allow trade with foreign merchants. An exception was Dutch merchants permitted to trade with local people in Dejima, a trading post located on a small artificial island. This was the only place where people from overseas could reach the Japanese mainland (Japan’s only window on the Western world) due to the national isolation implemented because of foreign invasions at the time of the Tokugawa Shogun. Although the Dejima island has been reclaimed over the decades by sea, this trading area is designated as a Japanese national historic site and now under the strict protection of the local government.
Working hours: 08:00 – 21:00 daily
Admission fee: adults – 510 yen; high school student – 200 yen; children – 100 yen
How to access: Take tram number 1 to the Dejima tram stop (5 minutes, 120 yen from Nagasaki Station) 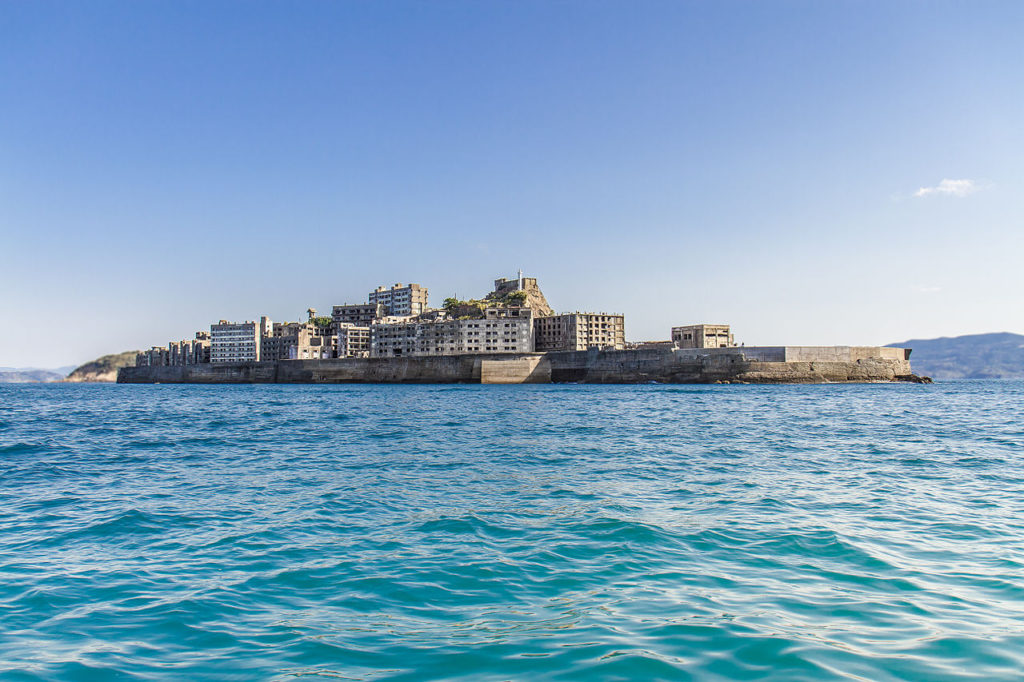 Gunkanjima, which translated into English means “Battleship Island,” is mostly known as another name: Hashima Island. The island has been abandoned for more than three decades because in 1974 when the undersea coal mine was closed, all residents of the island were forced back to the mainland. At present, the most notable features of the island are the abandoned concrete buildings. In April 2009 a safe walkway was constructed that allows tourists to see into the miners’ lives during this period. However, most of the inland areas are restricted due to the volatile footing. On April 2015, Gunkanjima was approved as a UNESCO World Heritage Site, a representation of the negatives of Japan during the past rapid industrializing period. 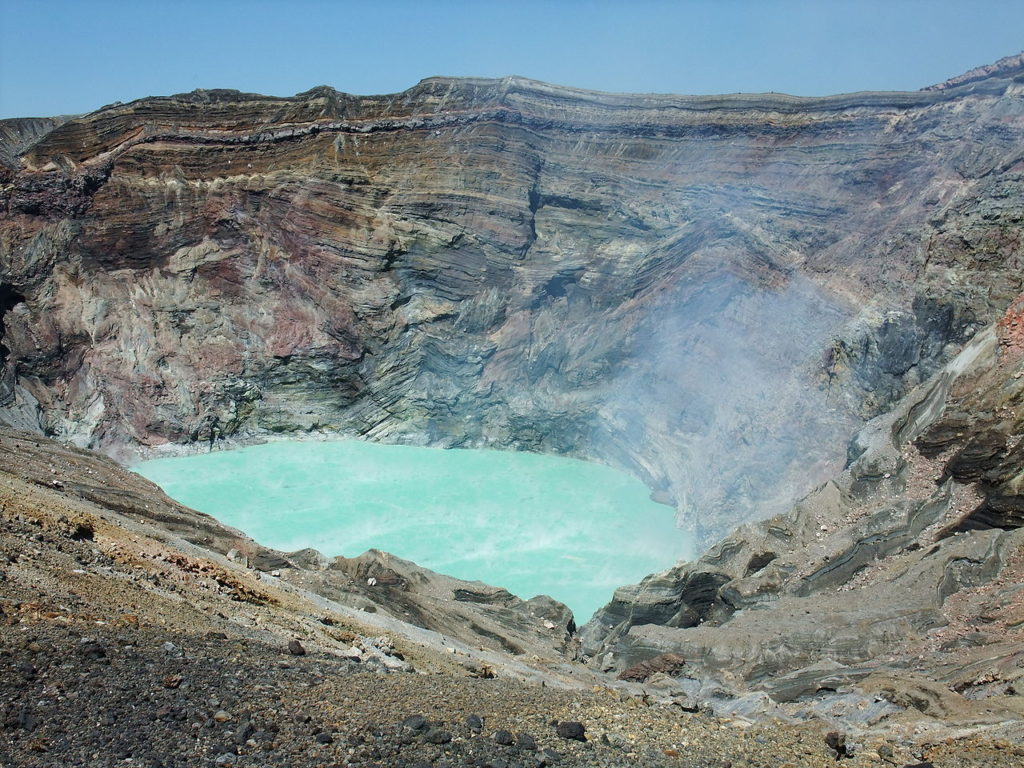 Mount Aso (阿蘇山, Asosan) is the largest active volcano in Japan with the height of 1,592 meters above sea level. Tourists cannot drive their own vehicles to the mountain’s crater but they can take shuttle buses which run directly to a bus park which just a few minutes away from a crater. Due to the maintenance of Aso ropeway, it is closed indefinitely.
Working hours: 08:30 – 17:00. Closed day: 4th Wednesday each month.
How to access: reached in a 30-40-minute bus ride from JR Aso Station 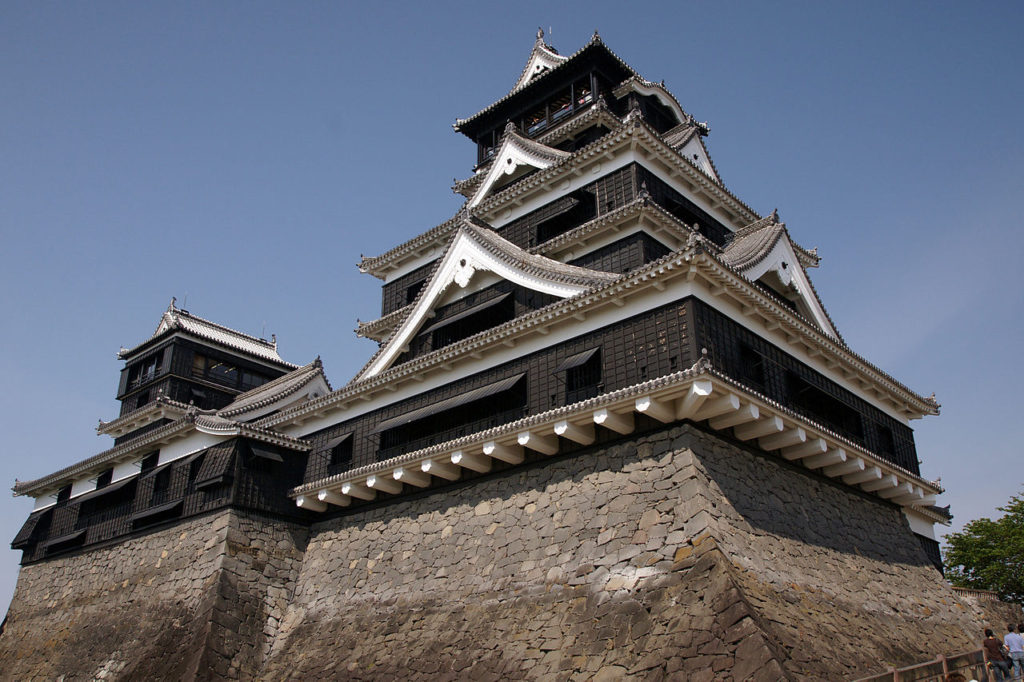 Kumamoto castle (熊本城 Kumamoto-jō) is known as one of the three premier castles in Japan. It was first constructed in 1467 by Ideta Hidenobu and after it had been expanded more and more to reach the same area like nowadays. Similarly to other castles in Japan, the local government reconstructed the castle using ferro-concrete to protect it from the damage of natural disasters and make it look attractive. Due to the 2016 Kumamoto earthquake, parts of the castle were heavily damaged. A part of the castle has been temporarily closed for reconstruction and there are plans to restore it to its original grandure.

How to access: take a 15 minute, 170 yen tram from  JR Kumamoto station, stop and get off at Kumamotojo-mae tram station 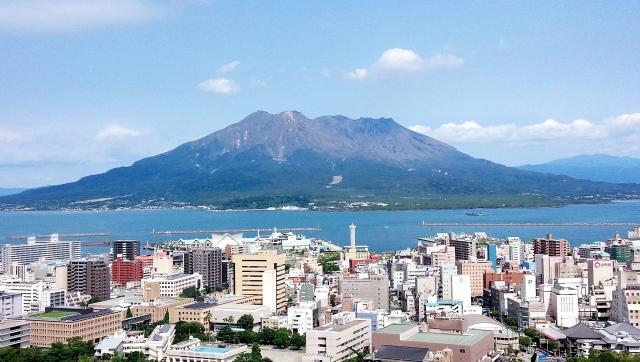 One of the most widely-known tourist destinations in Kagoshima prefecture is Sakurajima (桜島), another active volcano in Japan. Moreover, it’s one of the highest volcanoes in the world with a height of 1117 meters above sea level. Due to a powerful eruption in 1914, Sakurajima connected to Osumi Peninsula at the opposite side of Kagoshima although it used to be an independent island in the past.
Admission fee (one-way): adults – 160yen; children – 80 yen.
How to access: take a ferry trip from Kagoshima port to Sakurajima. 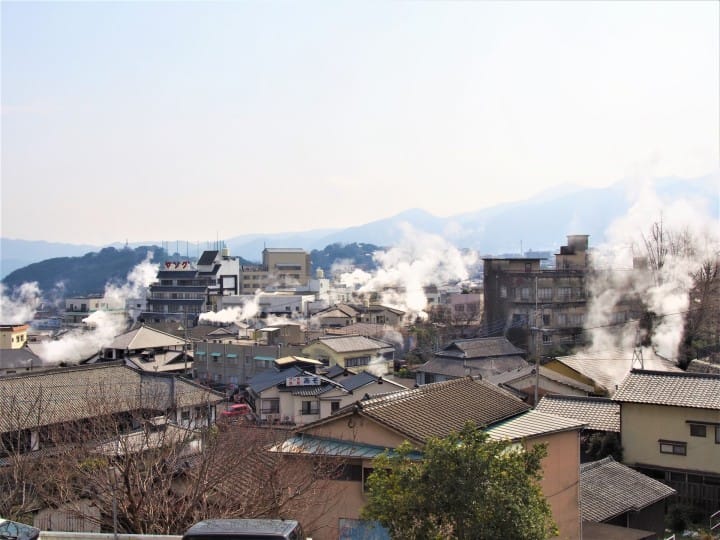 Beppu is a city in Kyushu famous for its hot springs (onsen). There are several styles of onsen services available depending on each resort such as a public thermal bath or natural sand bath. According to CNN, Beppu is the world’s second-largest source of thermal spring water after Yellowstone National Park in the United States. As a result, more than 2,500 onsen resorts are located in this small city. Some people associate Beppu with the concept of bathing in Jigoku (“hell” in English) because these hot springs are much hotter than usual ones. During your relaxing hot spring bath, you can try to eat food steamed by the onsen’s heat and believed to be good for your health such as corn and eggs. When I asked my friend living in Beppu, he just introduced me to one of the most visited Jigoku’s resort in the city named Umi-Jigoku (Sea Hell). It’s 200 meters deep and the average temperature is 980C (nearly boiling points). 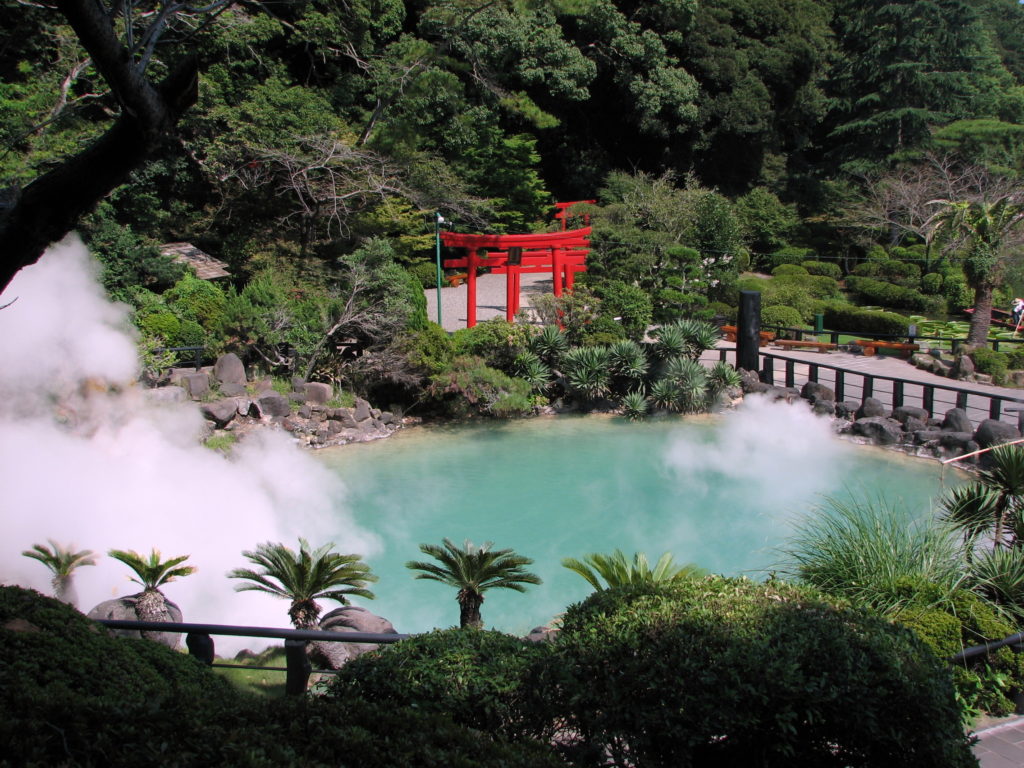 Active volcanoes are prevalent in the Kyushu region. After discovering the Kyushu region, tourists should pay a visit to Beppu city to try out Japanese traditional onsen for relaxing and to refresh to get right back out there and explore more of Kyushu’s famous tourist destinations.

Have fun with your vacation trip!!!