Seijin no Hi, known as Coming of Age Day, is one of Japan’s most popular national holidays because of the scale of planning and publicity and because it is one of the most colorful and important events of the year. 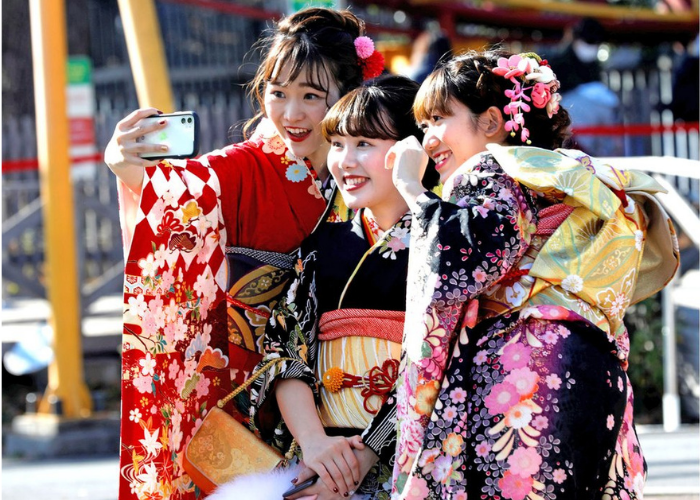 The holiday, which occurs on the second Monday of January annually, marks young people who have hit the age of 20 in the last year as the official age of majority in Japan. It is a point of pride and an opportunity for adults to remind coming generations that adulthood is not just about the right to drive, drink, and vote legally.

However, due to the pandemic of COVID-19, events have been canceled or moved online. Find more information below! 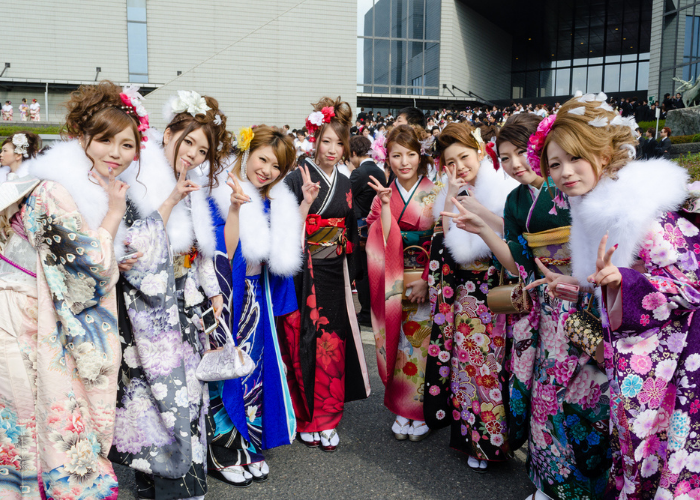 The Origins of The Ceremony

There are many theories about the history of the holiday, several of which date back to the 1970s when a young prince showed his clothes and hair as a symbol of becoming an adult. However, official holidays started in 1946, when Warabi – a small town of Saitama, organized a celebration to bring hope to younger generations after World War II. Other municipalities began to follow. In 1948, Sejin no Hi was established as a national holiday to honor young people and celebrate their path into a new, independent life.

How is Seijin no Hi Celebrated? 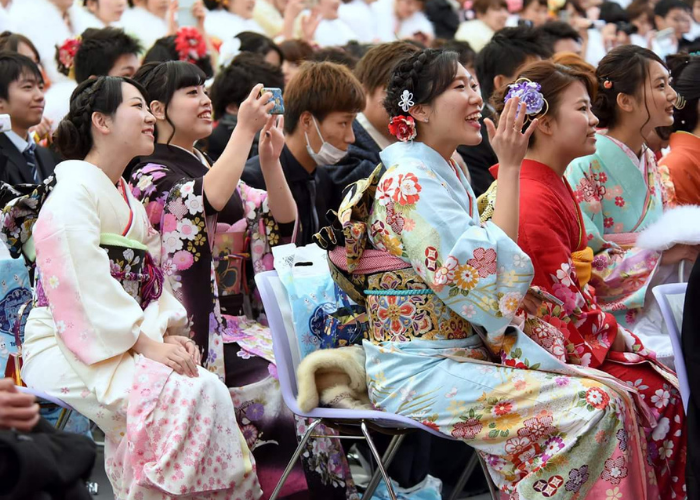 Until formally waving goodbye to their youth, 20-year-olds registered in the area are invited by each municipality to a ceremony at their local city hall. A series of lectures are given by well-established adults (mainly key city hall figures) about what it means to be an adult and young people’s responsibility for building the future. Small gifts and souvenirs of the event are usually offered to the participants. The ceremony is then followed by parties and family gatherings, with some more progressive municipalities organizing visits to shrines and other famous venues in their area. Some of the largest Seijin no Hi ceremonies (Coming of Age day) are held in Shibuya, Disney Land, and Meiji Jingu Shrine in Tokyo. 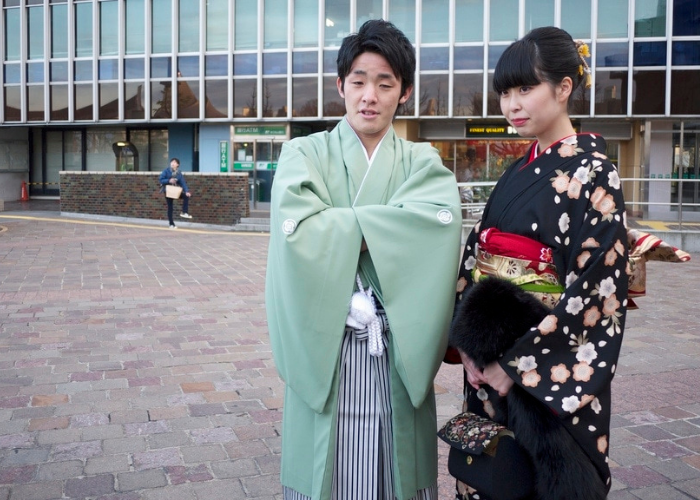 The clothing worn traditionally is essential for this holiday and requires preparation, especially for young women. Women traditionally wear a  furisode, a long-sleeved kimono worn by unmarried women. Hair salons and photo studios start campaigning months ahead of time, providing hair styling and exclusive photo services to mark the event. Most young men will still wear hakama, a type of traditional Japanese clothes, although they are gradually changing to western-style suits or other variants.

In recent years, Japan has been debating the situation of Seijin no Hi celebrations (Coming of Age day). It has transformed into wild class meetings or graduation parties, motivated mainly by a new sense of “freedom” and alcohol consumption. Hooliganism and arrests are not rare. Several areas have officially proposed rethinking the holidays to resolve the inappropriate behavior associated with the celebrations. 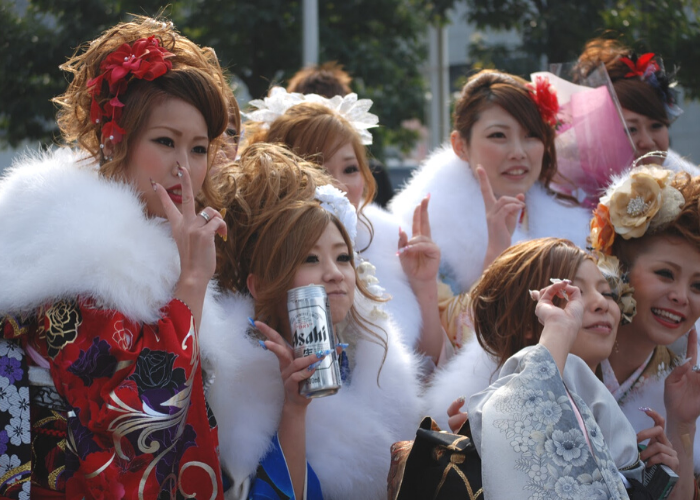 In recent years, Seijin no Hi celebrations (Coming of Age day) have transformed into wild class meetings or graduation parties, motivated mainly by a new sense of “freedom” and alcohol consumption.

Following the Japanese Government’s adjustment to the Civil Code, the age of maturity will be legally reduced from 20 to 18 years from April 2022. New adults from 2022 will be able to marry, sign contracts and take out loans without their parents’ permission from the age of 18 but will still be prohibited from smoking, consuming alcohol, and gambling until the age of 20.

In a country where formal ceremonies and mutual experiences are an essential part of youth culture, cancelation is unimaginable. “My friends and I have been looking forward to our Seijin no Hi (Coming of Age Day) for years. I can’t imagine not doing it,” says Arisa Takamori, a second-year university student from Chiba Prefecture, during an interview with TheJapanTimes.

Local governments across Japan have been making shifts to cancel coming-of-age ceremonies or hold them online following the national government’s announcement on January 4 to consider declaring another State of Emergency across Tokyo and three neighboring prefectures: Saitama, Chiba, and Kanagawa.

In northern Japan, the Aomori Metropolitan Government declared on January 4 that it would call off the ceremonies scheduled for January 10th before the coming-of-age day on January 11st and organize an alternative ceremony online. Though the local government intended to host a coming-of-age ceremony while taking steps to avoid contamination, such as spreading participants around various locations and requiring them to apply in advance, it eventually opted to upload a YouTube video commemorating the event.

Moves to conduct ceremonies online have also spread to Tokyo. Sumida Ward is going to broadcast a concert and screen messages from former teachers. Katsushika Ward officials are preparing to hold a ceremony without attendees and upload videos to their website.

Out of concern for potentially strained local health systems and other impacts, the Fujiyoshida Municipal Government in Yamanashi Prefecture, west of Tokyo, declared the cancelation of its ceremony on January 4.

In northern Japan, Sendai’s Municipal Government asked young adults living outside Miyagi Prefecture to refrain from attending the ceremony. In a press conference on January 4, Sendai Mayor Kazuko Kori has spoken to them, saying, “I’d like you to make an adult decision.”

Meanwhile, the Sapporo Municipal Government in Japan’s northernmost Hokkaido Prefecture declared last year that it would cancel its coming-of-age ceremony this year. The governor of Miyako, Iwate Prefecture, in northern Japan, said that if a state of emergency is declared, they will ask citizens of Tokyo, Saitama, Chiba, and Kanagawa to refrain from attending the ceremony.

In a country like Japan, where formal ceremonies and mutual experiences are an essential part of youth culture, cancelation is unimaginable. Local governments across Japan have been making shifts to cancel coming-of-age ceremonies or hold them online following the national government’s announcement on January 4 to consider declaring another State of Emergency across Tokyo and three neighboring prefectures: Saitama, Chiba, and Kanagawa.

If you think this is a helpful piece of information, please share it with your family and friends in Japan. Thank you for supporting us. We will update the information as soon as possible.