The 6 Most Popular Kinds of Japanese Fast Food | Guidable

The 6 Most Popular Kinds of Japanese Fast Food

In many countries, fast food means a burger at Mcdonalds or a quick sandwich from the local shop. When you don’t have enough time for lunch, you can order and can get the food within minutes. You might finish lunch within 15 minutes.

Japan also has many kinds of original fast foods, and you can find a lot of fast-food restaurants near stations, or in shopping malls. Many fast foods can be ordered online or taken-away to eat at home. Japanese fast foods mainly fall under two categories.

One is a dish served on rice, called a “donburi,” such as gyudon.  The other is noodle dishes like ramen or udon.

In this article, we would like to introduce six kinds of Japanese fast foods.

The gyudon’s “gyu” means beef, and “don” stands for rice. Gyudon is a bowl of rice topped with beef and onion simmered in sugar, soy sauce, and sweet Japanese sake, flavored with fish and seaweed stock. 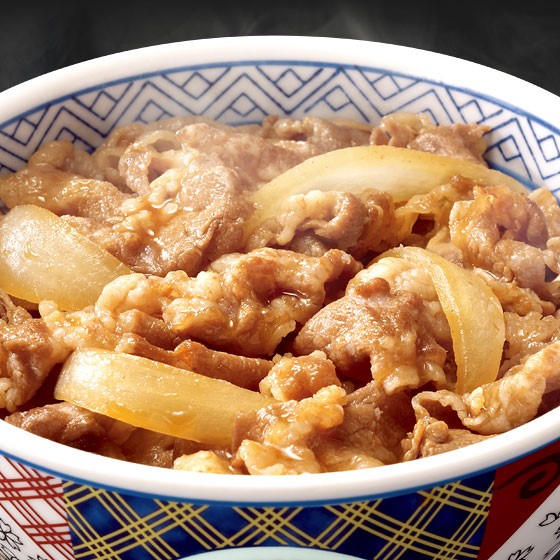 The History of Gyudon

In Japan, the custom to eat beef was started in the Meiji era with the Westernization of Japan. One of the largest gyudon restaurant chains, Yoshino-ya began serving gyudon in 1899 in Tokyo as a small restaurant and now has over 1,000 gyudon shops throughout Japan. Two other popular chains named Sukiya, and Matsuya also have a similar number of shops in Japan, and there are even some overseas!

How to Order Gyudon:

You can choose the size of rice or toppings when you order. If you want to order the standard size, you can ask for a “futsu-mori” in Japanese. “Futsu” is “standard,” and “mori” is a kind of numeral，which stands for the volume of the rice usually. This is the size that is typically served to you if you just ask for gyudon.

You can also ask for an order without onions (tamanegi) by saying, “Tamanegi nuki de onegai shimasu.”

If you want more spice, you can add red pepper or ginger to your gyudon; both are usually available on the table for you to add at your own preference.

Katsudon is another popular bowl rice menu in Japan, as well as gyudon or tendon (tempura on rice). Katsudon is a bowl rice dish topped with a deep-fried pork cutlet, eggs, and onions or other vegetables. 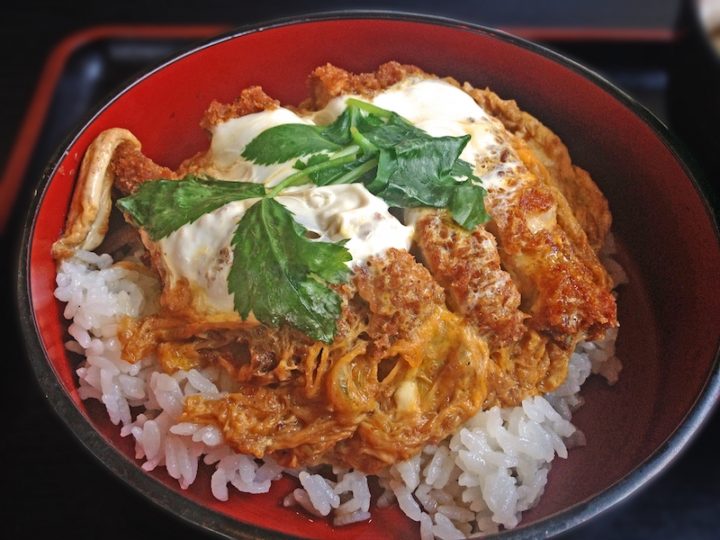 Katsudon restaurants generally prepare different varieties of sauce so you can try new types of katsudon. Some include demi-glace sauce and with cabbage, or miso sauce. Local shops may also pride themselves on their specialty sauce.

As well as cutlet, “katsu” has another meaning, “win” in Japanese. So, some students will eat katsudon the day before a big test or baseball game.

Curry rice is also a very popular fast food in Japan. You can eat curry rice not only at curry restaurants but also at coffee shops, cafes and family restaurants. 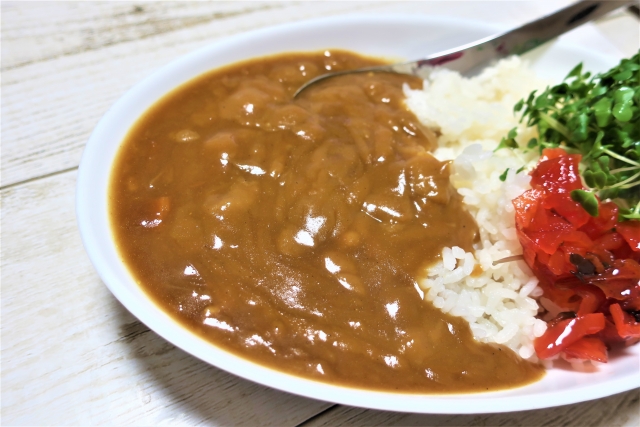 Of course, curry as a meal itself originates in India, but the Japanese curry rice dish was introduced to Japan during the Meiji era (1868-1912) by the British. The formal name of the dish in English is “Curry & Rice.”

In Japan, curry rice is not only eaten as fast food, but it is also made at home and served at elementary schools or junior high schools.

The most typical curry rice sauce includes onions, carrots, and potatoes. Often meats such as beef, chicken, and pork are supplemented to the sauce. Sometimes, fish or seafood too. Rather than powder spices or a jar of premade curry, households in Japan generally make their curry using curry roux blocks that are added to the ingredients after water.

How to Order at a Curry Shop

When you eat curry rice at a curry shop, you need to choose the following:

・What sauce would you like? Vegetable, chicken, beef, or pork curry?

・How much rice do you want to eat?

The standard rice amount is 200-300 grams. If you are hungry, you can add more, or alternatively, you can ask for less rice by asking “Gohan sukuname de onegai shimasu.”

・Do you want to add spice?

If yes, how much? In some fast-food chains, you can choose for it to be 50 times spicier!!

・Do you want a topping?

There are a lot of options, such as a half-boiled egg, katsu, vegetables, and more!

Don’t worry, a lot of chains have picture menus.

Try Putting Curry on Other Dishes!

Curry has a deeper flavor than Japanese soup stocks, so, and it can be added to a number of other dishes. Use it together with noodles and make curry ramen or udon!

Ramen is a popular fast-food available in Japan, and it’s so famous many restaurants have appeared overseas in recent years. You might already have your favorite type of ramen! When taking a stroll in Japan, you may notice the sheer number of ramen noodle shops available.

Some Japanese people have the custom to eat ramen after going drinking. But not only after drinking, but ramen is also enjoyed for lunch and dinner. Some Japanese high school students go to ramen shops after school. People in Japan often cook instant ramen at home or eat cup noodles for a quick snack. 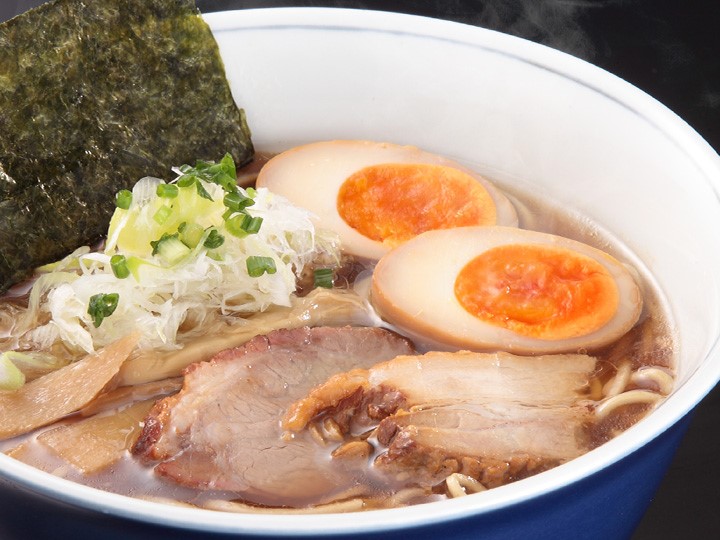 What is Japanese Ramen?

Ramen noodles are made from basic ingredients: wheat flour, salt, and mineral water. Noodles of Ramen have various shapes, lengths, and thicknesses to match each soup.

Ramen’s basic soup is made from stock based on chicken, pork, and vegetables. This main soup is combined with another soup, of which stocks are made with bonito (katsuo-dashi), kelp (konbu-dashi), or vegetables.

In Kyushu, the Western part of Japan, pork bone broth soup, called “tonkotsu soup,” is very popular and can now be found throughout Japan and also overseas! Soaking brings out the collagen from the bone of the pig, which makes the flavor deeper and heavier than other soup.

Each ramen has a flavor to accentuate the soup

・Shoyu aji (soy sauce base flavor) is the most familiar and traditional. This soy sauce flavor matches chicken and vegetable stock soup.

・Shio aji (salt base flavor) is the lightest flavor of ramen

・Miso aji (miso base flavor) miso is a traditional Japanese seasoning produced by fermenting soybeans with salt. Miso ramen was cooked and eaten in Hokkaido for the first time. The flavor is very rich, and a lot of people like to eat miso ramen when they visit Hokkaido, especially in winter to warm the body.

How to Order Ramen

Whenever you order any food, a very effective way is pointing at the picture on the menu.

And you can say:

I want this – “Kore kudasai” in Japanese.

I want that – “Are kudasai” in Japanese.

“I want to order what they are having” – “Ano Hito to Onaji Mono Wo Kudasai” in Japanese.

Hints How to order

It’s useful to remember the following words and memorize the soup color when ordering ramen.

a) Soy sauce based ramen

There are many stories about the origin of the Udon. In an account, it is said that the Udon was brought from China. In another story, a Japanese monk made udon after returning to Japan from China. It is not so clear when Japanese people started to eat udon, but it is known that they were eating udon in the Edo period.

How to Eat Udon

Udon noodles are served as a hot noodles soup or as chilled noodles to be dipped in a sauce. Next, you can choose the size of the serving you prefer.

The dipping sauce for chilled Udon noodles has a much stronger taste than hot Udon soup.

Some people drink the hot noodles soup, but that is up to you and will not be considered impolite either way.

A lot of the Udon noodles shops are self-service style. After you choose your Udon, you can pick up side dishes. In a lot of Udon shops, tempura, which are deep-fried chicken, seafood, or vegetables, are prepared as side dishes. There are often other side dishes, such as a Japanese rice ball (おにぎり), or sushi rice wrapped in fried bean curd (いなりずし).

You can order udon noodles’ set with toppings. The following are popular:

There is a grain called “soba” in Japan, known as “buckwheat” in English. The Soba noodles are made from buckwheat flour, and sometimes wheat flour is also mixed with the buckwheat. It is said that Buckwheat is more healthy and effective for dieting than rice and wheat. The soba’s noodles are light brown and are thinner than udon noodles.

Similarly to udon noodles, you can choose to eat chilled soba or hot soba noodle soup. 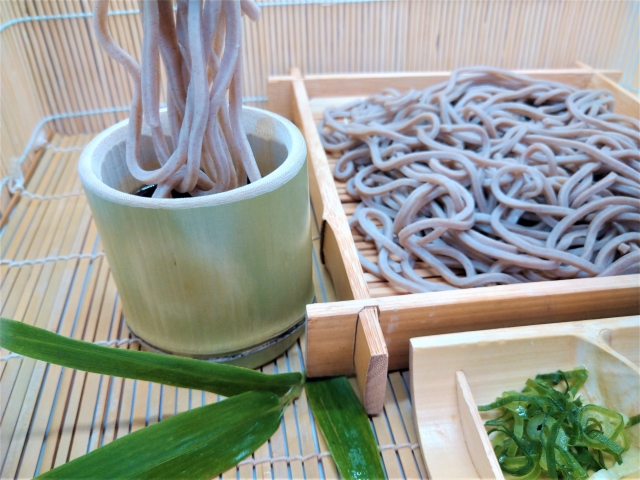 The custom to eat buckwheat did not start in Japan. Buckwheat has been cultivated and eaten since B.C.6,000. in Central Asia, Europe, China, in other countries.  It is said that Soba noodles were introduced to Japan around the 8th century, and general people came to eat Soba noodles from the Edo Period (17th century) as a light meal. Soba noodles were often served with Japanese Sake (Japanese rice wine). There were many soba shops in Edo towns (the current, Tokyo). Some people often used to go to soba shops like people nowadays would go to a cafe.

Soba is eaten a lot, especially in the Tokyo area. You can find soba shops inside the station or near train stations. It’s perfect to kill time when you are waiting for the next train in winter, or when you want to warm your body up on a chilly night on your way home. When you do not have a good appetite in hot summer, you might be able to eat chilled soba noodles, because soba noodles are thin and easy to digest.

A lot of standing soba shops have both standing and seating areas. You might find that some customers finish slurp down the meal, completing the process of ordering, eating, and leaving in several minutes.

・Soba-cha is a tea made from roasted buckwheat; it is fragrant and tastes refreshing. Usually, Japanese restaurants serve Green Tea, but Soba noodles shops will serve Soba-cha.

・Soba-yu is served in soba restaurants when chilled soba is ordered. “Soba-yu” is the remaining hot water used to boil the Soba noodles. This hot water has a faint scent and flavor of soba noodles but isn’t very tasty on its own. Some people enjoy the hot water by mixing it with the dipped sauce.

What Japanese Fast Food Will You Try Next?

It might not be so easy to order Japanese food when you come to Japan for the first time, but it’s worth it. Some chain stores have English menus or an automatic order panel with English and pictures. Also, a lot of first food restaurants’ dishes are sold at convenience stores or supermarkets so you can try them at home first then venture out to a fast food store!