At the end of a hot summers day there’s that beautiful magical moment, inevitable, and wonderful in every way possible – everyone loves a sunset in Tokyo. It’s important to find the best spots for the event and the best ways of getting there, whether it be by train, car, on foot, or climbing to one of the highest summits in the country. Find some of the best ways to get around the metropolis to see and experience this spectacular phenomenon in and around the bustling city! 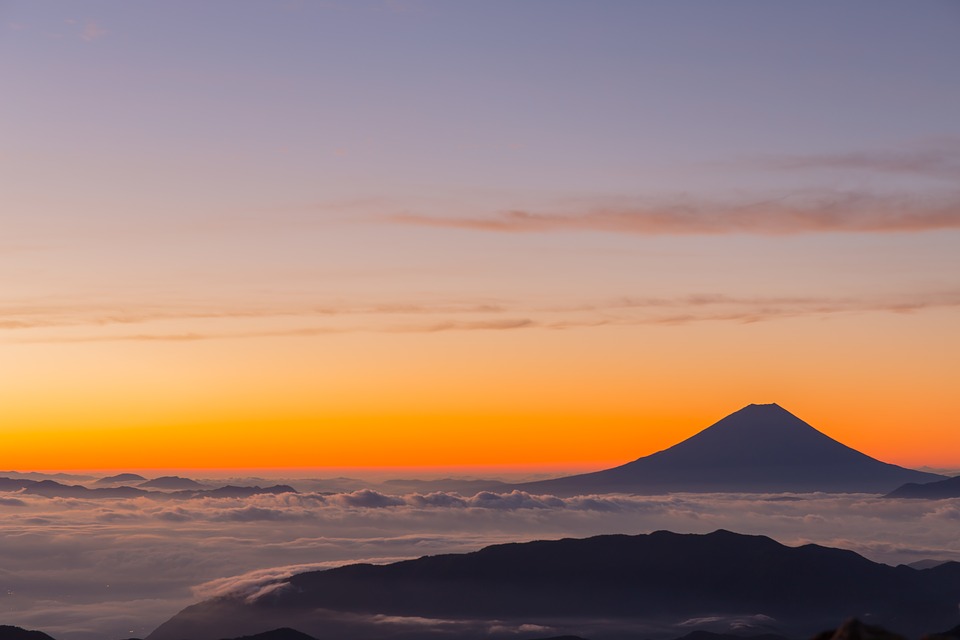 One of the most popular choices amongst many is the view from Fuji-san, one of Japan’s Three Holy Mountains including Mt. Tateyama in Toyama Prefecture and Mt. Haku, shared by Gifu, Fukui and Ishikawa prefecture. At 3,776 metres (12,389 feet) above the ground the breath-taking, emotional view is told and then retold by many who have been lucky enough to be present.

The mountain and active volcano is split between 4 trails (Yoshida, Subashiri, Gotemba and Fujinomiya) that lead up to the summit and take between 7 to 5 hours to climb. Wear responsible clothing, bring suitable trekking gear, and a camera of course, because this will be no easy feat. Luckily, it isn’t recommended that you have any previous climbing experience but it’s important to read up and research your journey before setting off.

The best dates for ascending are from July and the end of August and the mountain is officially open for climbers from the beginning of July through till September, so plan wisely if you wish to avoid the large crowds during the middle of Summer!

Getting to the mountain from Tokyo is simple and easy. Book tickets online and board a bus from Tokyo station to Mt. Fuji’s Kawaguchiko or Fuji-Q Highland stations, a typical bus journey takes around 2 and a half hours and costs just over ¥1,700(one way).
At Kawaguchiko, take another train to Mt. Fuji’s Subaru climbing station for the Yoshida Trail. The ride lasts just under an hour at ¥1,500(one way) and there is no need to make a booking for this part of the trip.
If you prefer the train, take a JR Limited Express train at Tokyo Station to Otsuki and transfer to a Fujikyu Railway train which will take you directly to Kawaguchiko Station or Fuji-Q. The journey lasts about 2 hours and costs over ¥2,600 (one way).
There is also the special Summer Rapid Fujisan train service in the morning that can take you from Shinjuku to Kawaguchiko for a little cheaper price (around ¥ 2,400) and at a quicker pace. 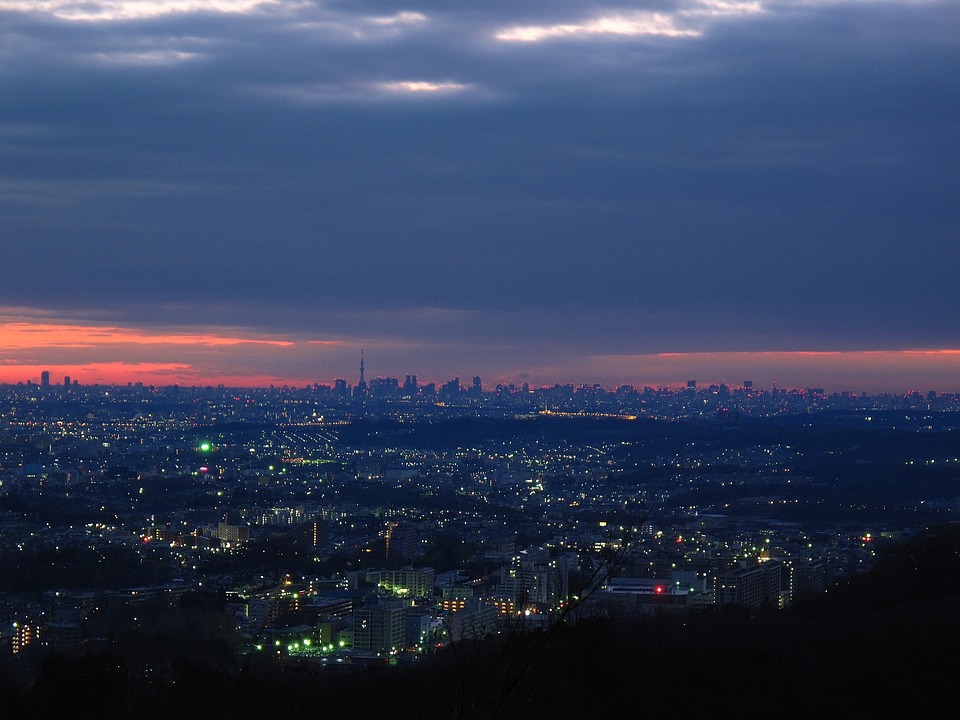 The Tokyo Metropolitan Building, designed by the honourable Kenzō Tange, dominates over Shinjuku at 243 metres and sticks out over the Tokyo flatland. Known as the tallest building in the city until it was overtaken by the Midtown Tower in 2006, the Metropolitan duo each contain a free observation deck for those wishing to view the city from up high at 202 metres. On a clear day, one can see Mt. Fuji to Tokyo Tower and beyond in the gothic inspired blocks.

From Tokyo station, take the JR Chuo line to Shinjuku Station and walk for about 15 minutes to the building. Alternatively, hop on the Toei Subway Oedo line for Tochomae Station which lays directly below the building. 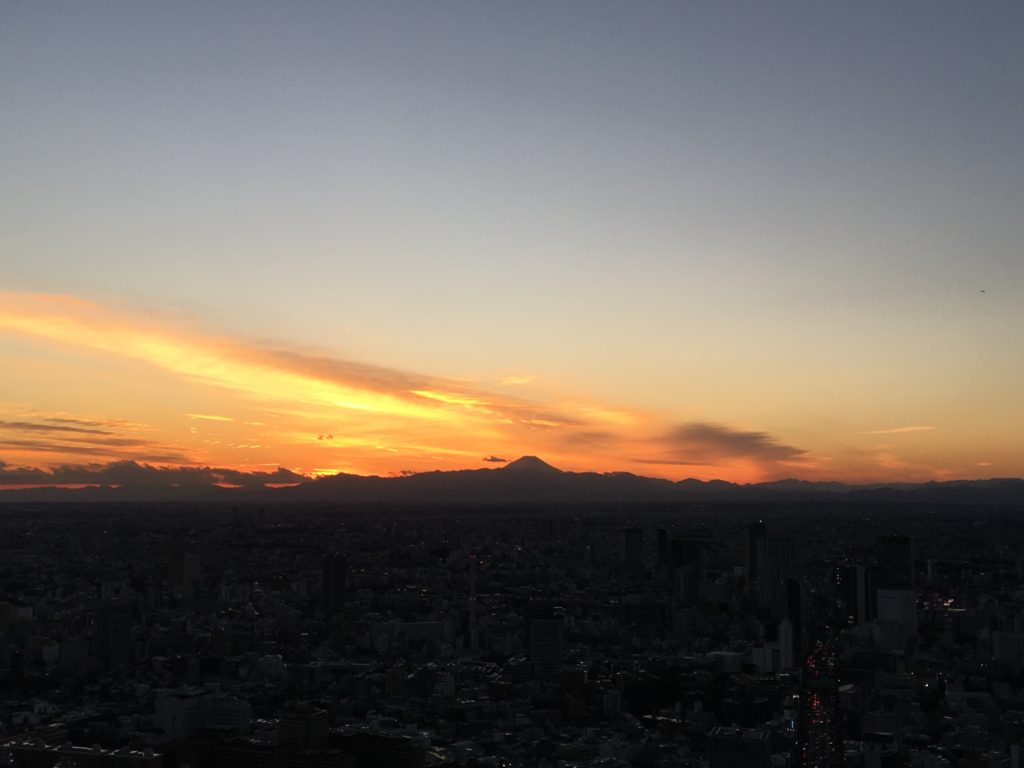 Take a trip to the affluent Roppongi Hills for this spectacular rich view of Tokyo, then soak in some art, or dine out for a meal straight afterwards.
Located atop Mori Tower at 238 metres, Tokyo City View and its thin glass lookout space is one of Tokyo’s most stunning and popular viewing points in the city. If you wish to be outside, the Sky Deck with its own Helipad right at the top of the building is a gift to you from the city of Tokyo. From here you can get some of the best views of Tokyo Tower and the surrounding landscapes of the Minato area. Within Mori Tower you can also visit the Mori Art Center and Museum or one of the many restaurants in the building with the beautiful Mori Garden right behind the skyscraper. 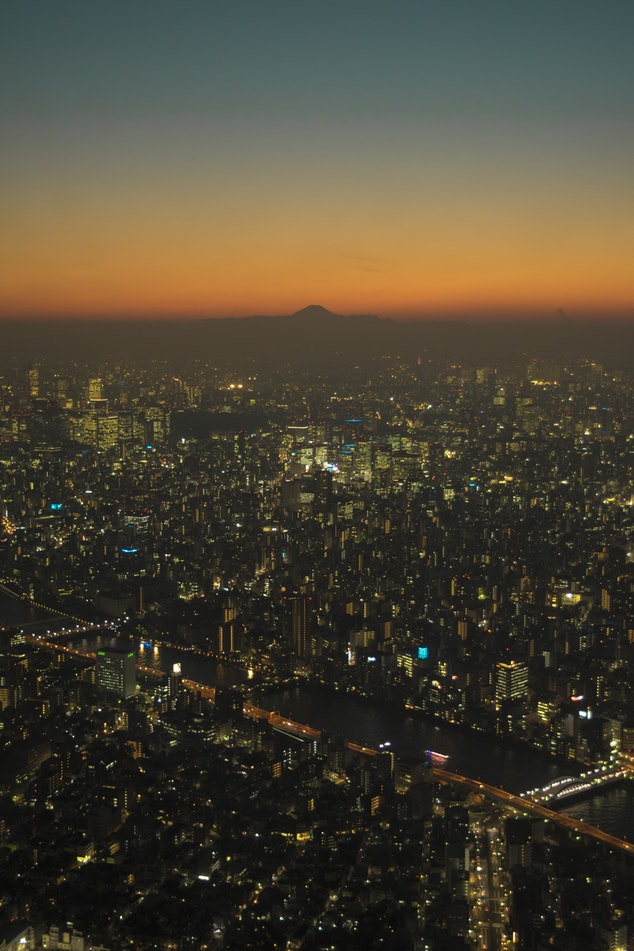 Tokyo Skytree can be seen from as far as the most distant bordering neighbourhoods in Tokyo. It’s the landmark that screams “You’re in Tokyo! Welcome, welcome!” to visitors and tourists alike. The Kanto television broadcasting tower (with restaurant) is the tallest structure in Japan at 634 metres (2,080 feet) and is the worlds second tallest structure next to the Burj Khalifa in Dubai. The building boasts two observation decks, Tembo Deck at 350 metres and the other at 450 metres in the iconic spiral corridor at the top of the tower. The deck runs around the tower and serves as one long beautiful panorama of Japan. The restaurant at Tembo Deck, Musashi 634, delivers a tender blend of French-Japanese cuisine, ‘Tokyo-Cuisine’. An interesting note is that the word ‘Musashi’ was also the name given to the old province that housed Tokyo and the surrounding area within the current Kanto region. Once you’ve explored the heart of the tower, advance higher with an elevator trip into the Tembo Galleria, a twisting steel spiral that reaches right up the tower at 450 metres.
At night, marvel from afar at the colourful illuminations that whirl around the tower. Iki, a bluish color which carries the meaning of stylish and Miyabi, a purple hue with the definition of elegance, can be seen on alternating days. At the bottom of the tower rest the Tokyo Skytree Aquarium and a Planetarium nestles not to far from the structure, both are worth a visit.

Two ticket types exist, the Fast Skytree tickets for internationals that enable you to skip the lines to the Tembo Deck, and Same-day tickets. Prices vary between ages but the standard Same-day 18 years old and over tickets go for ¥2,060 for the Tembo Deck and ¥1,030 for the Galleria, tickets must be bought separately, and a generous discount is available for the disabled.
Fast Skytree tickets go for ¥3,000 at 12 and over, and the combo deal for both floors at ¥4,000. No reservations are needed for both ticket types except for large group bookings which come with a discount (group tickets are Japanese language only I’m afraid)!

Here’s a list of some of the best spots from where you can watch the beautiful sunset in Tokyo!