On the last weekend of August every year, in the Koenji neighborhood of Suginami ward in Tokyo, one of the biggest festivals (most people) in Tokyo takes place. This festival is called the “Koenji Awa Odori Matsuri” (Awa Dance Festival). This festival is, for lack of a better term, awesome-awesome not just in the casual sense of “great,” or “impressive,” but also in the literal sense of “awe inspiring.” First of all, let’s get into what the AWA ODORI is. 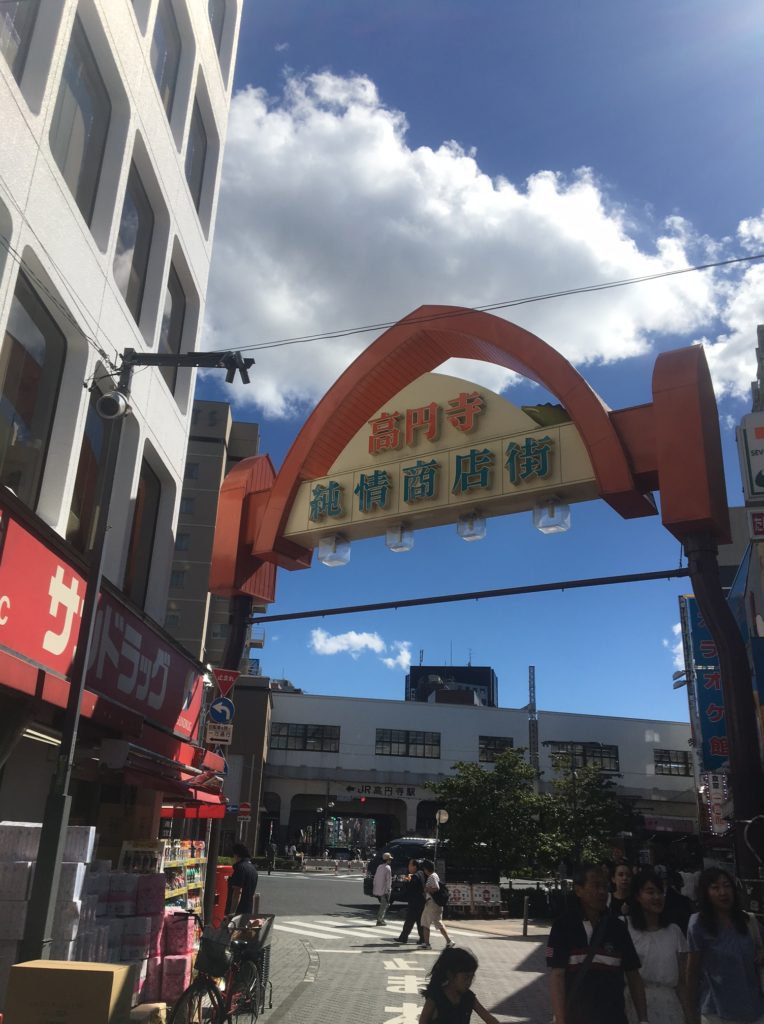 The Awa Odori originates from Tokushima Prefecture, originally coming from Bon Odori (Bon is a period in August in Japan when people return to their ancestral hometowns when it is believed the souls of their ancestors return). The clothing worn by the dancers is distinctive, and the dancing (this is from my perspective, a person having absolutely zero rhythm or musical sense) is really primitive and visceral, conducted along with the rhythmic beating of drums. When you approach the festival, and you HEAR the beating of these drums, accompanying by the jingling of bells and human shouts, the impression is overwhelming, on a very basic, primitive human level. It really is something to see and hear. 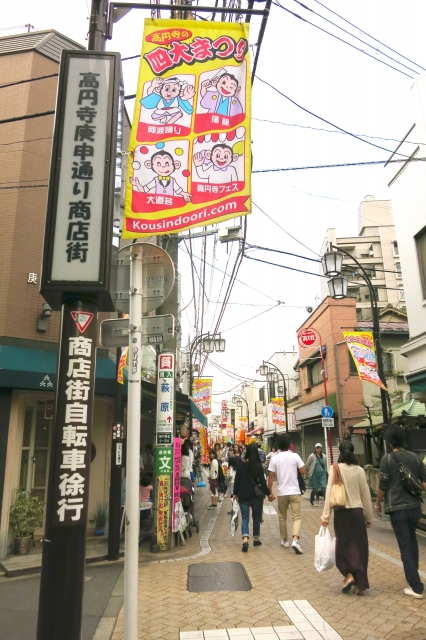 First of all, a little about Koenji. Koenji is a neighborhood in the Suginami ward of Tokyo. It is located on the Chuo train line and the Sobu train line, about five minutes from Shinjuku (by train). It is a very interesting area with several lively shoutengai (Main Commercial Street) and more restaurants, used clothing shops, bars, and other shops than you can count. 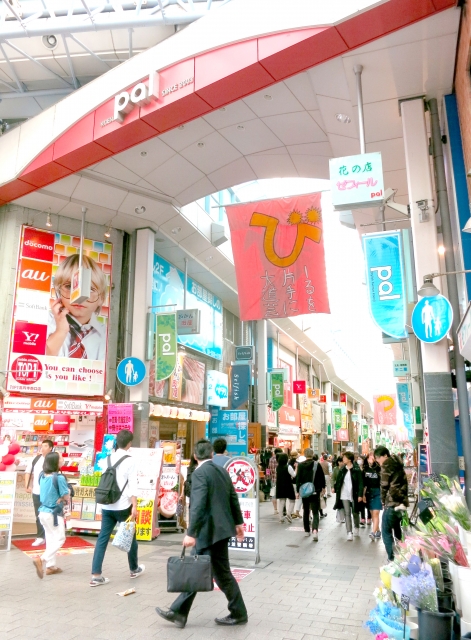 The dance festival began in the 1950s and was originated by people from Tokushima Prefecture. This is the second largest Awa Odori festival in Japan, next to the Awa Odori festival in Tokushima itself, and over the two days the festival is held, over one million people attend this festival, in which almost 200 Awa dance groups participate. The dance festival extends from the south side of the station to the north side of the station along two of Koenji’s main shoutengais. It is almost impossible to see the dance itself because there are so many people. Many people will arrive at seven or eight in the morning to secure a space near the shoutengai so that they can watch the dance (the dance itself doesn’t start until the later afternoon or early evening). In recent years, at the public squares to the north and south of the station, the festival organizers have provided large-screen televisions so people can see the performances because, as noted, with the number of people, and the narrowness of the shoutengais in question, it is very difficult to actually see the performance unless you arrive extremely early to secure a seat along the parade route. Other matters that people attending this festival for the first time should keep in mind: (1) the station Koenji itself is not a facility that can handle this HUGE influx of people, so on this day, passengers are cattle-car herded into and out of the station. DO NOT ATTEMPT TO BUY A PHYSICAL TICKET. Charge up your train pass in advance so that you can get in and out quickly. (2) Bathroom facilities are extremely limited. There are no porta-potties, and convenience stores, which normally allow you to use their bathrooms for free, close their bathrooms to the public during this weekend. As do every other restaurant and izakaya unless you are a paying customer, and with these places, you will likely have trouble getting in due to the huge number of people. If you enjoy walking around while eating and drinking, as I do, your only option is using a koushuu toire (public bathroom; usually provided in parks and the like), and I happen to know where several are located in Koenji, but if you’re new to the area, you may not. Almost every food establishment in Koenji puts a booth in front of its premises, and hawks beers, highballs, and easily portable food at quite low prices. I attend this festival almost every year, and at this point, I don’t even try to watch the performance because it’s nearly impossible, and instead, I focus on drinking and eating a lot. 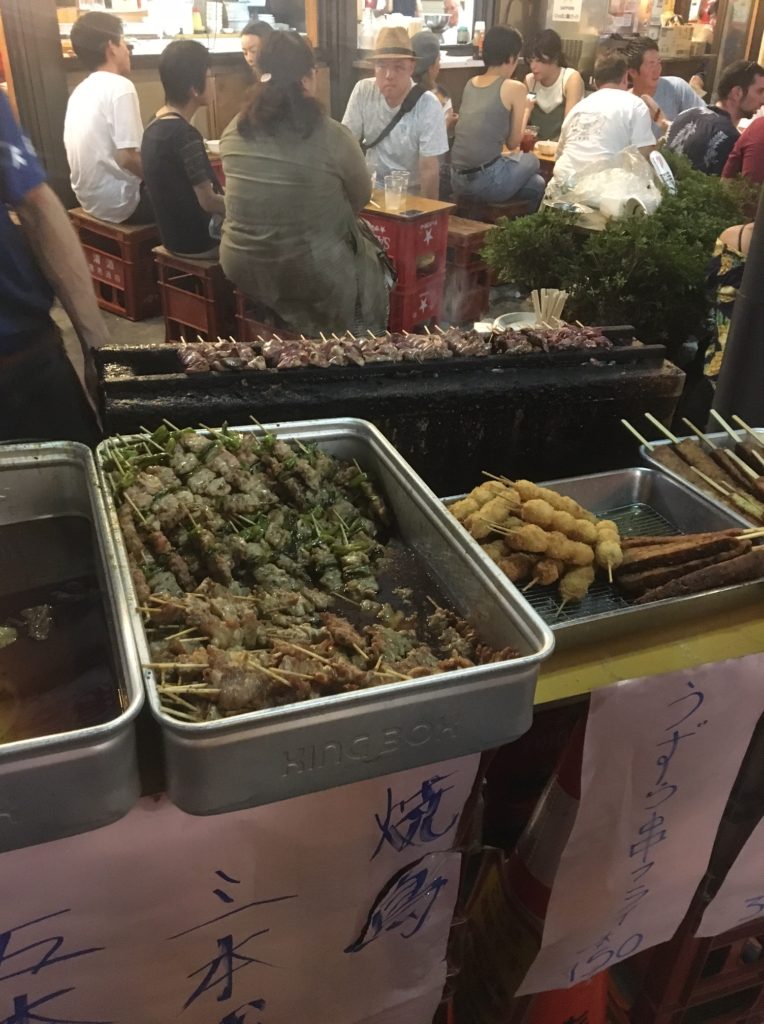 If you are attending this festival for the first time, and you want to watch the performance, I suggest watching from the south side of the station. From the south side, the road and the shoutengai where the dance is performed are wider than the shoutengai at the north side, and there are also the abovementioned large televisions, so it is easier to watch from here. 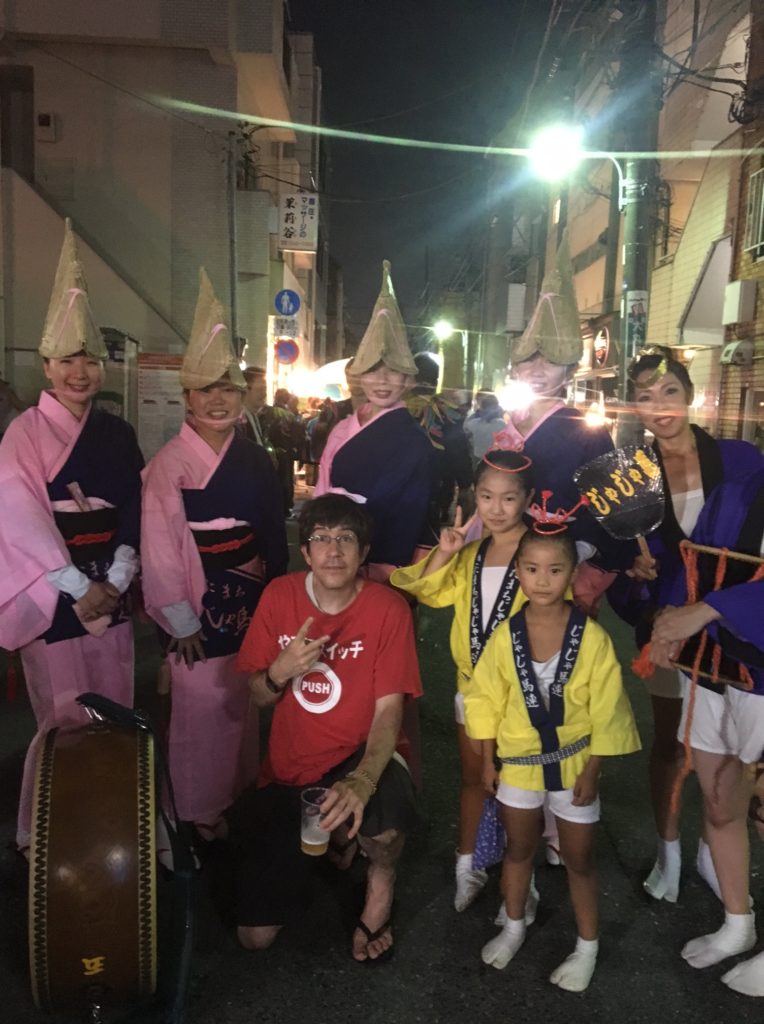