Where To Go on Vacation? (Part 3): Chugoku Region | Guidable

Where To Go on Vacation? (Part 3): Chugoku Region

In part 1 and part 2, we recommend the best places that people should go and visit the Kansai region. Now, in part 3, we would like to invite you to head south and travel to the Chugoku Region from Kansai. You may know about Hiroshima City from its devastating history; the atomic bomb that killed thousands of people and destroyed all the buildings inside the city. Now that the city has been rebuilt and became on one of the most memorable places that visitors should go when they travel to Japan. 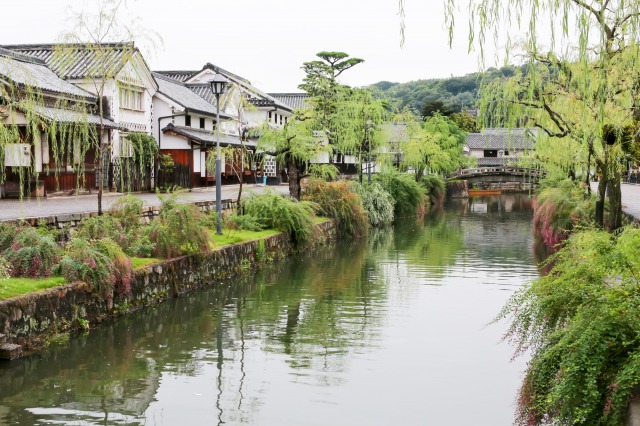 In the Edo Period (1603-1867), Kurashiki with its belonging canal area used to be the rice trade center of Japan. In fact, in Japanese, the meaning of this town is “a town of storehouse” where a lot of warehouses were built to store rice. When visiting this town, tourists will enjoy the ancient environments of merchants during the Edo period, and it’s possible to buy some local goods for souvenirs. This town also features the oldest Japanese museum for Western Art. 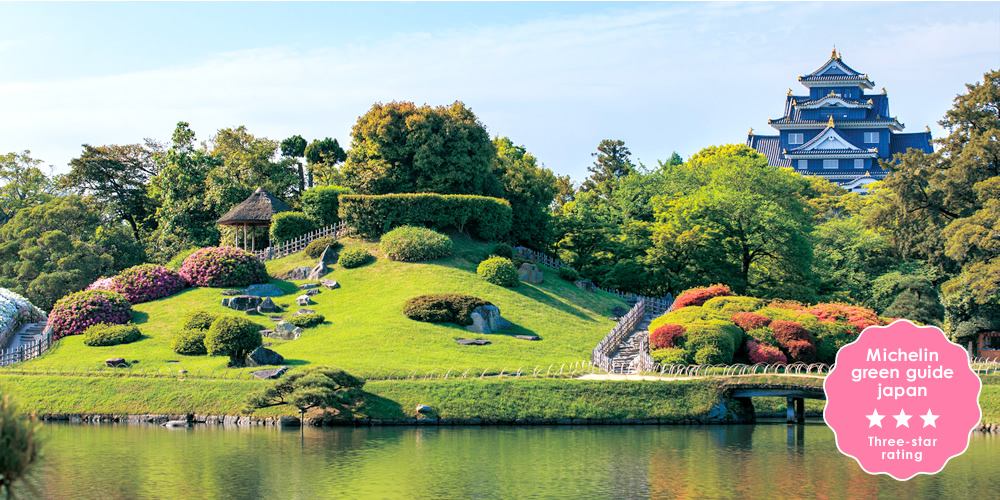 In Okayama city, the most favorite tourist destination is Korakuen garden (後楽園, Kōrakuen). This garden, which was built in 1700, is one of the most beautiful gardens in the whole of Japan. It used to be a private place for daimyo families but in 1884 its ownership was moved to local government and it became public garden as it is at present days. There are many gorgeous separate areas in the garden with several kinds of colorful flowers for visitors to see and enjoy a peaceful environment in the park. And the garden’s scene will change differently depends on seasons. 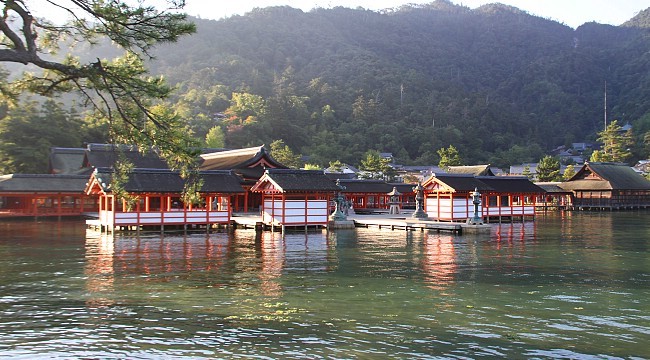 Itsukushima Shrine (厳島神社, Itsukushima Jinja) is located in Itsukushima island, which is famous for its floating buildings in the sea. It was regarded as one of the most beautiful spots in Japan and the shrine is listed as the UNESCO World Heritage. This shrine does not have an exact construction time but it has been said that the main building of shrine was first built in the 6th century by Saeki Kuramoto as a place for local residents for worship. However, the most well-known part of Itsukushima shrine is O-torii gate whose height is 16,8 meters. During high tide, people will see this gate and Itsukushima shrine as if it was floating above the water, a beautiful and peaceful scene. Moreover, when the tide is low, people can even walk on the beach to reach and touch the amazing tori gate. This gate is one of the most favorable national figures of Japan and it appears on many souvenirs from keychains to T-shirts. Despite being destroyed many times due to natural disasters, the local government is still able to repair and keep the buildings the same as its original structure. The whole shrine is illuminated in the evening until 11:00 pm so is an impressive sight for visitors to see and take pictures. 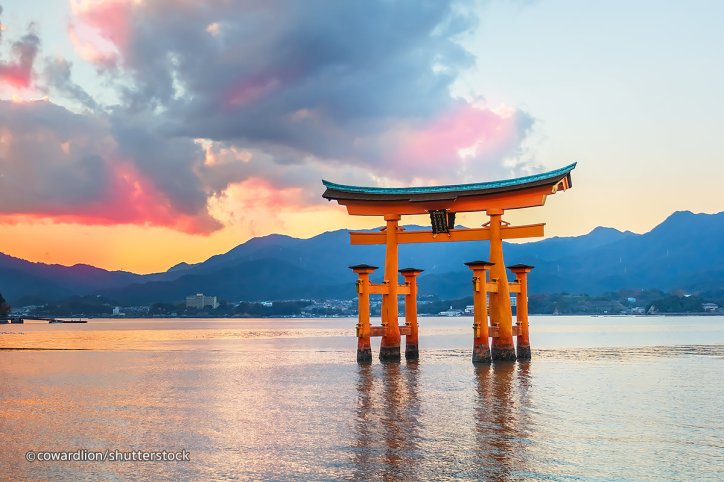 Hours of operation: 6:30 to 18:00 every day (closing time changes depending on seasons)

How to access: It takes about 10 minutes by ferry to travel from Miyajimaguchi pier to the world cultural heritage site of Miyajima 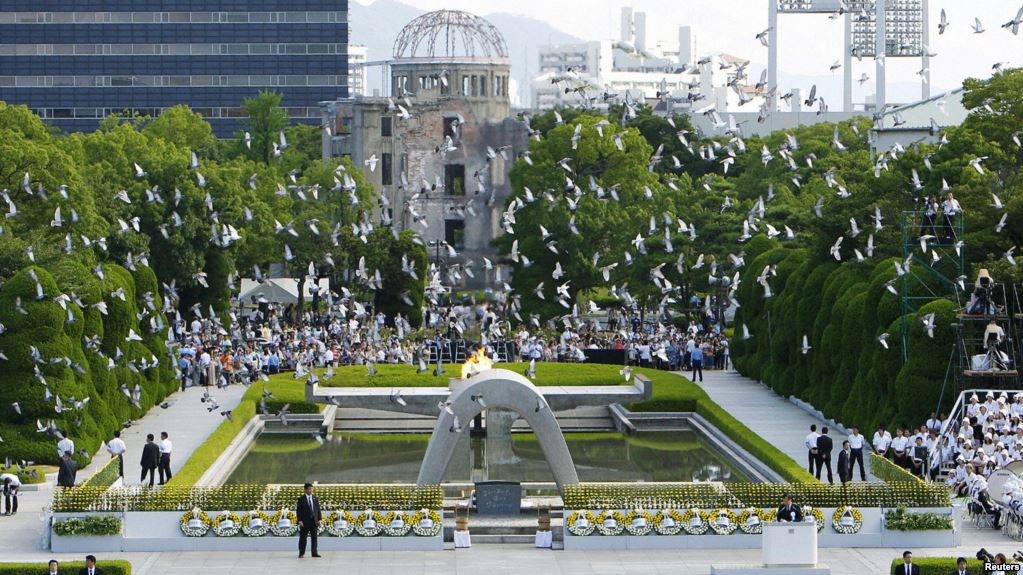 Hiroshima Peace Park is a memorial park built to memorize the death of the atomic bomb’s victims and promote peace. It covers approximately 120,000 square meters and contains 4 main sections. The first section is Cenotaph for the Atomic bomb Victims where the total of 297,684 names of victims are on the memorial list to pray for their souls’ rest in peace.  The second part is the Hiroshima Peace Memorial Museum. When you visit this museum, you will see pictures showing the history of Hiroshima, the city’s condition after attacked by A-bomb and how citizens suffered from the radiation effects of the nuclear bomb. The third part is children’s peace monument which was built by the school raising money to memorialize all the innocent children killed due to effects of the atomic bomb and to promote the positive mindset of Sasaki Sadako who died after the battle against leukemia. Finally, the most famous part of the park is the Atomic bomb Dome used as government offices before the bomb. It is situated just 160 meters away from the bomb’s blast center, and although every nearby building was completely destroyed, parts of Dome’s structure remained standing. After the bomb’s explosion, it became “a symbol of horror and nuclear weapons and humankind’s pledge for peace” and confirmed as a UNESCO World Heritage in 1996. In May 2016, Mr. Obama was the first sitting US president to visit this symbol and talk to bomb’s victims. 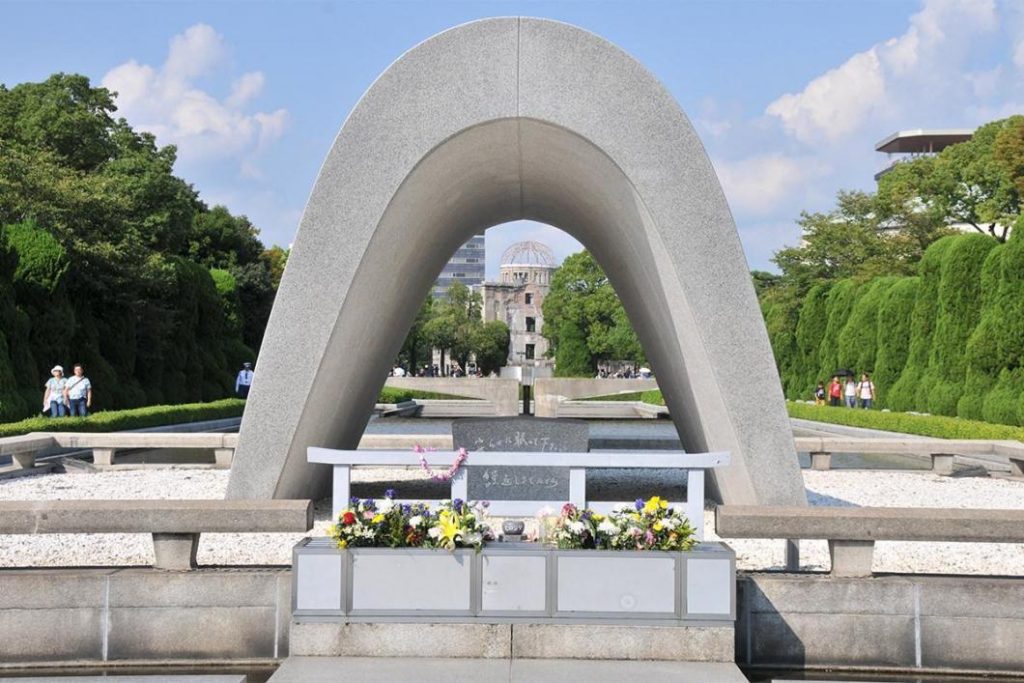 Cenotaph for the Atomic bomb Victims 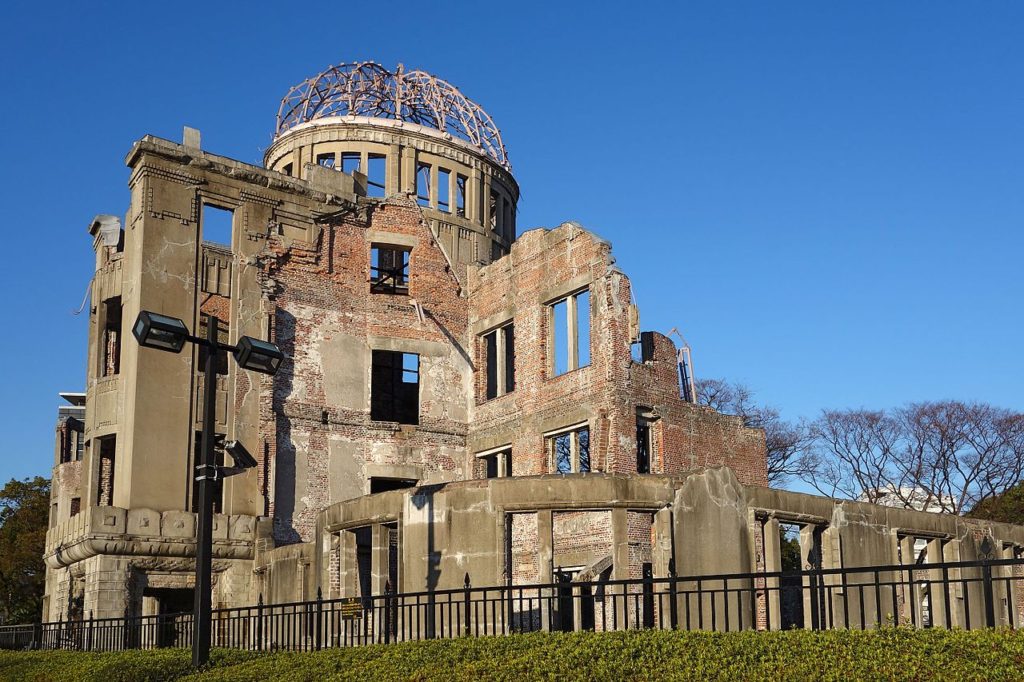 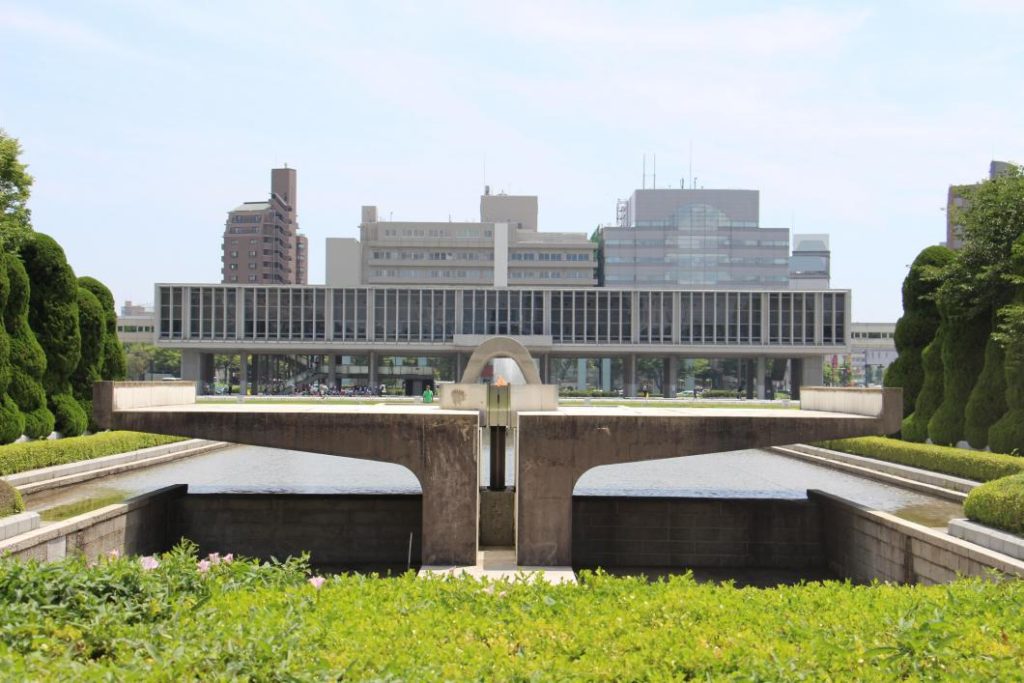 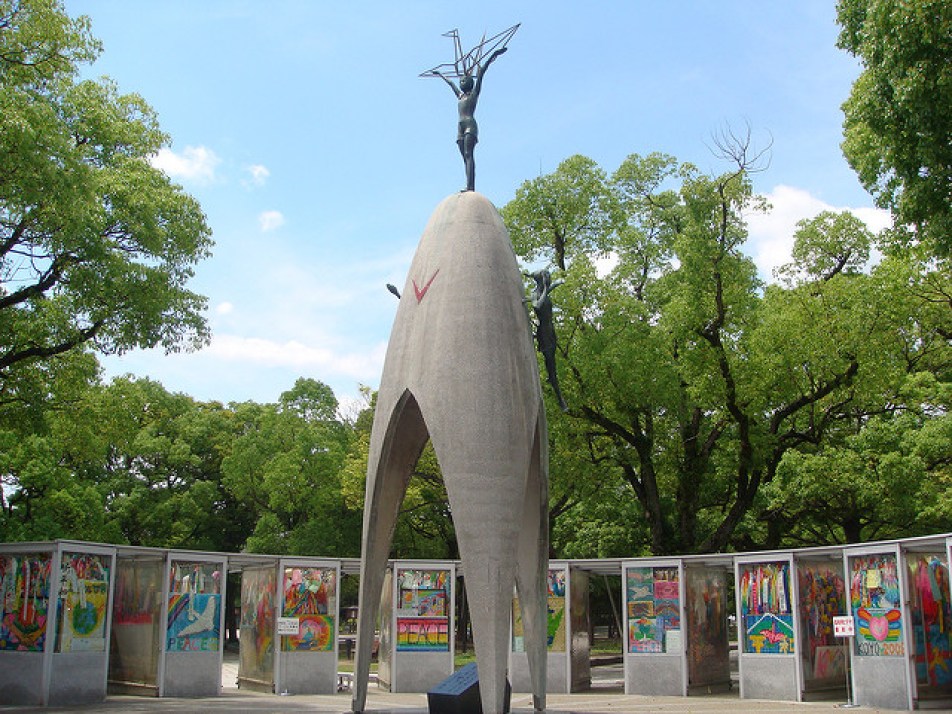 Hours of operation: 8:30-18:00 (closing times changes depending on seasons) 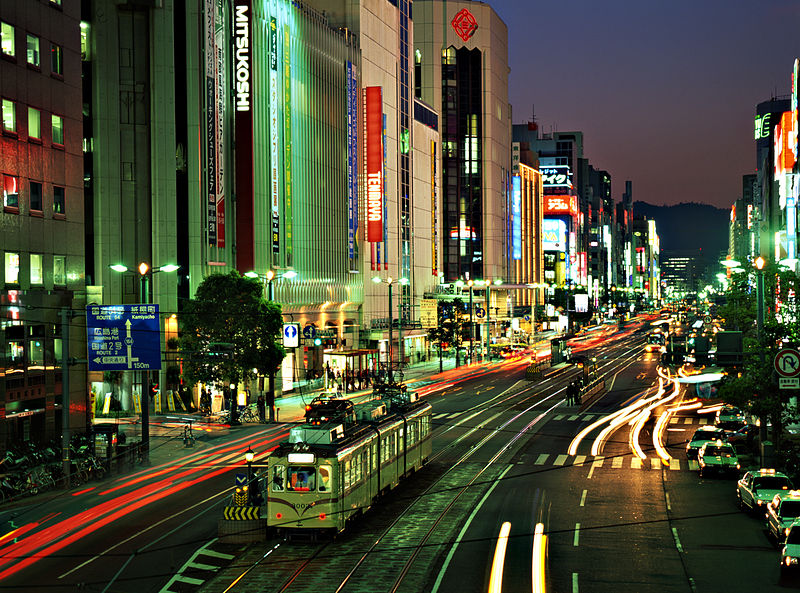 Hiroshima is a modern and developed city and its downtown area has two main streets: Hondori and Aioidori street with department stores and restaurants to serve for both locals and foreigners. When entering this area, tourists are advised to eat Hiroshima style Okonomiyaki which is a slightly different flavor from remaining Japan’s okonomiyaki. 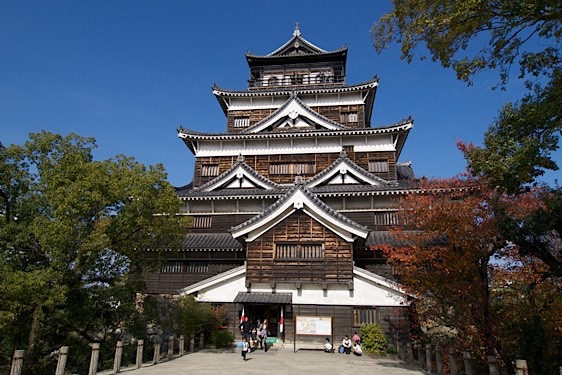 Hiroshima castle, which was built at the end of the 16th century, somehow has the same building structure as other castles in Japan. At that time, it was used as a place for leaders to control and manage nearby areas including Hiroshima, Shimane, Yamaguchi, Tottori and Okayama Prefecture. Although it was completely destroyed by the bomb in August 1945, local government used its original structure to rebuilt it again in 1958, although the main construction’s ingredient was concrete.

Access: Approximately 10 min. by tram or bus from JR Hiroshima Station and get off at “Kamiya-cho” stop then walk for 15 minutes.

Yamaguchi Prefecture is popularly known for its beautiful ancient temples. The most 3 beautiful temples or shrines in Yamaguchi are Rurikoji Temple – a five-storied pagoda, Joeiji Temple – well-known for its great natural scene, and Yamaguchi Daijingu – a complete small version of Ise Shrines. If you enjoy peaceful, natural views or religious buildings, this prefecture is an excellent place to pay a visit. 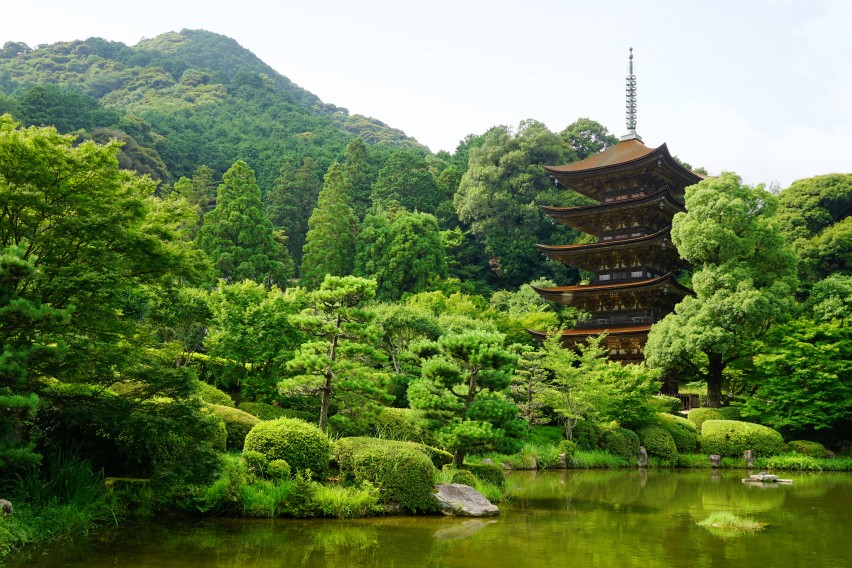 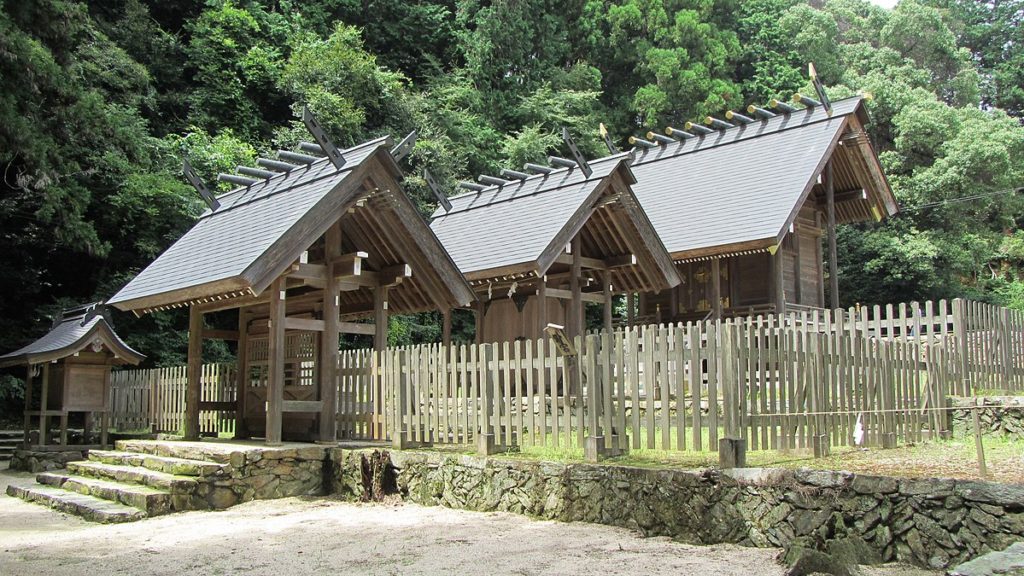 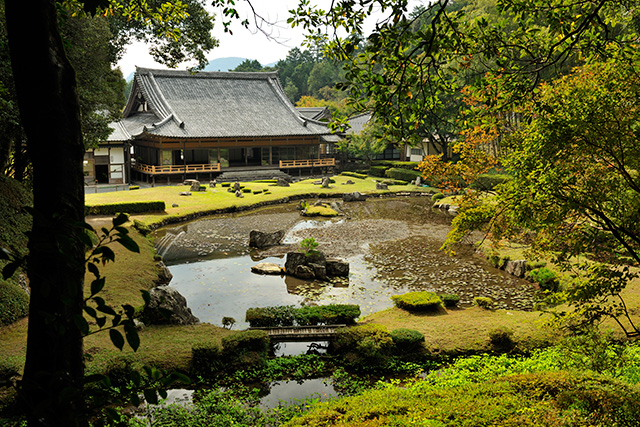 Here are some recommended tourist destinations when you travel to Chukoku Region. Enjoy your trip!