Halloween in Japan: How is it Different? And How to Celebrate in 2021 | Guidable

Halloween in Japan: How is it Different? And How to Celebrate in 2021

Western holidays in Japan aren’t exactly known to be as grand and celebrated as they are in the west. In fact, some hold the view that holidays such as Christmas and Valentines are “simply the fondest dreams of merchants,” as described by one foreigner living in Japan. It is indeed true that western holidays in Japan are heavily commercialized with the cultural or religious components behind them often left out. What about Halloween in Japan then? Is it any different?

As Halloween in Japan is also tightly tied with merchants and businesses wanting to profit off it (estimated to be an over 1 million USD market), there is little cultural nuance in it. Especially since Japan already has a similar festival called the Obon festival, which similarly honors the spirits of the dead.

In fact, Halloween is actually a relatively ‘new thing’ in Japan. It entered Japan during the turn of the 21st century, with theme parks leading the way in introducing the event to the local Japanese. Tokyo Disneyland was effectively the trailblazer for this trend in Japan, holding a very successful Halloween event in the year 2000 before other theme parks and the wider Japanese public gradually adopted the trend.

Halloween in most of Japan is also relatively mild. You don’t really see that many Halloween decorations in the streets during the season, it is mostly celebrated by only the young generation unlike Christmas and Valentines (see graph below) and ‘trick or treat-ing’ is not even a common practice here (although some do organise trick or treat events). Another interesting thing to note is that the orange “Halloween” pumpkins are not really consumed in Japan but are merely used as decorations. 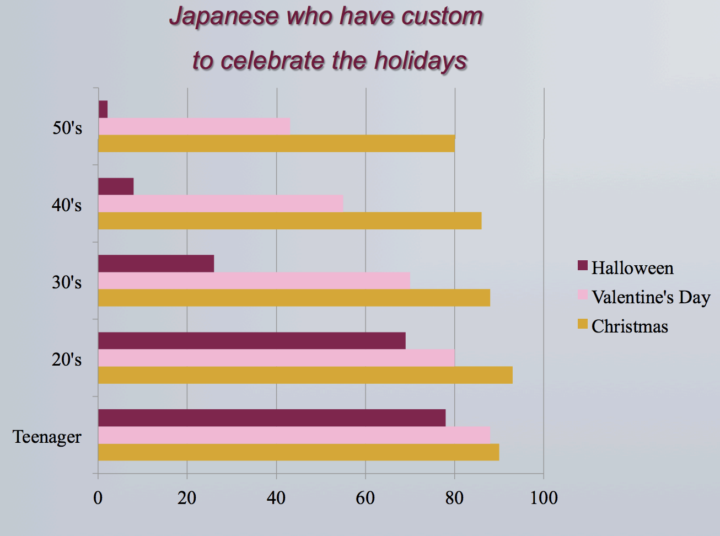 However, Halloween in Japan has its own peculiarity, such as the unique cosplay culture that’s fairly rampant amongst the younger generation or the street parades and parties happening in pockets of the cities. Many of you might have heard of the infamous “Shibuya Halloween”, which is held at the heart of the Shibuya district every October 31stnight (pre-pandemic). In 2018 the Shibuya Halloween party, reportedly attended by over  million people was actually so rowdy and chaotic that the government decided to place regulations on drinking in the area during the event, effectively banning people from drinking on the streets.

This is something to note as drinking in public is legal in Japan. Although drinking in the streets is generally frowned upon, it is a different story with drinking in festivals, outings such as hanami (cherry blossom viewing) are often associated with drinking, thus the fact that the government had to regulate drinking is a testament to how frenzied the party was in late years.

Shibuya’s Halloween party has been cancelled again this year due to the pandemic, but you can join their online party instead! The festivities are due to start from 16th October 2021 up until 31st, Halloween. Last year the same event was joined virtually by over 400,000 people, and it’s expected to be popular again this year!

There will be online virtual performances of music, comedy, sports and more! This year you can even roam around Shibuya (virtually) using your own 3D Avatar Pocket RD’s “AVATARIUM”, a fully automatic avatar generation system that allows you to create your own avatar using a smartphone application and scanners installed at commercial facilities such as “au Style SHIBUYA MODI” and “GINZA 456 Created by KDDI”.

Aside from the mess that is Shibuya Halloween, Halloween in Japan has other unique sides to it too, below are some of them:

Considering Japan’s long love for cosplaying it is no wonder that the Japanese have taken up Halloween cosplaying to their liking, actually, Halloween costumes in Japan are generally on the cuter side rather than being straight-up scary. However, this one cosplay trend is not exactly cute or scary. Jimi, a Japanese word meaning sober or plain is the word used to describe this recent costume trend and it describes exactly the grass-root fad that has taken hold of Japanese Halloween. 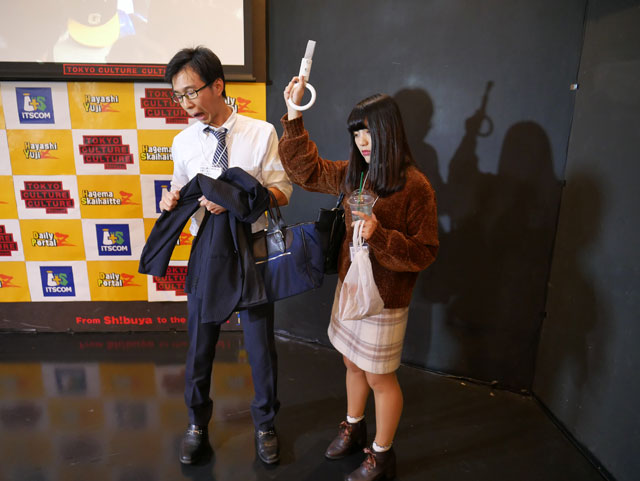 The guys and gals who decided to go jimi forsake glitzy costumes for the more budget friendly getups, depicting the everyday life scenes in Japan, from stressed salaryman to store clerks. This trend emerged a few years ago when some people from DailyportalZ decided to hold a dress-up party that only allows daily getups, it has then caught the attention of social media users.

Last year the party was held online due to the pandemic, and this year the event will take place both on and offline! The tickets go on sale from 18th October.

The Halloween Trains popped up in the 1990s when expats living in Tokyo decided to throw a Halloween party inside the trains. The event then gradually became a tradition where foreigners would waste themselves away, drinking and partying, leaving a huge mess behind.

However, in 2009 a group of Japanese appeared outside of Shinjuku station, protesting and blocking people from partying inside the train. Since then, the Halloween Train have become an officially organized event where one has to sign up for and nothing like the rowdy Halloween Trains that used to haunt the Yamanote line every October 31st.

Besides Shibuya, there are many other places where the street gets festive, this is because Japanese do not really hold parties in their homes which is why many take it out into the street or the bars. The following places are a few of the more famous ones where Halloween parties are held:

As the pioneer of Halloween events in Japan, it makes no sense to leave it out of the list. The Disney Halloween celebrations run from early September to October 31st, where special parades, merchandise and Halloween decorations will fill both Disney Land & Sea.

There are a couple of restrictions that one needs to have in mind though. Such as restrictions to the character costume that can be worn (only Disney characters and Disney-affiliated characters are allowed) and what cannot be worn (no overly revealing costumes, no weapons, etc) for more details check out here.

The parade held in Roppongi ever year is free for everyone to join. This year there will be a children’s stamp rally using smartphones. Children can get some Halloween treats by collecting 3 or more stamps at stamp rally checkpoints in the area.

Aside from the parade, Roppongi also celebrates the event with special events happening in restaurants and shops.

Pre-pandemic Makuhari was Japan’s (supposedly) biggest Halloween party x Rock festival. This year they are instead hosting a Halloween orchestra concert with HYDE!

How Will You Spend Halloween in Japan This Year? 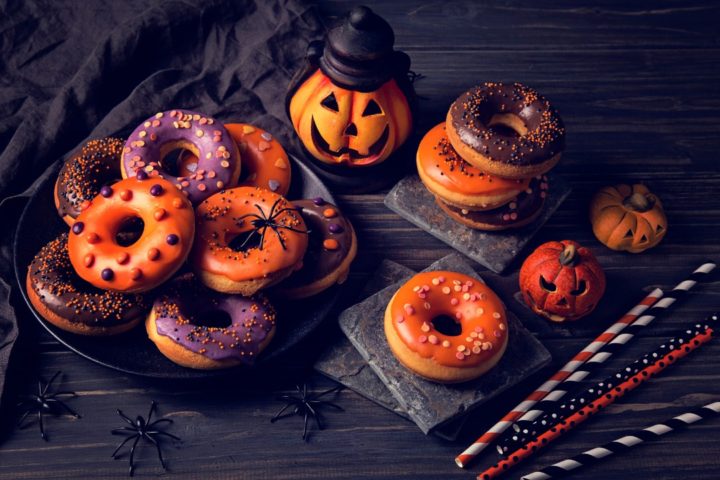 As with most cultural festivals and events, Halloween in Japan has its similarities and differences from other countries around the world. What Halloween customs are there in your country?

Have you made plans for Halloween this year? We would love to know!