A Shinto Shrine is a structure that houses Gods and ancestors. You can visit Shrines all over Japan but it’s helpful to know the manners and etiquette surrounding them for a respectable visit!

Manners and Etiquette at Shinto Shrines

Typical Objects at a Shinto Shrine

At Shinto Shrines, the following objects and structures can often be seen.

Torii are a traditional Japanese gate, which is known as the entrance of a Shinto shrine. The main function of a Torii gate is to mark the space as sacred and it is the simplest way to distinguish Shinto shrines from Buddhist temples. Torii are traditionally made of wood or stone, but nowadays many of them are also made of reinforced concrete, steel, and other materials. The most common colors of the Torii gate are orange and black.

Lion-dog, which is also referred to as Komainu in Japanese, is a pair of lion-like guardians. They can be usually found on each side of the entrance or inner shrine. However, guardians are not limited to lions or dogs. In fact, the most famous kind of Komainu is the fox, which is the symbol of Inari Shrines.

Ema is a small wooden plate that shrine visitors usually write their prayers and wishes on. Visitors will hang it up at a particular place in the shrine, waiting for the Gods to realize their hopes. A large number of people come to the Shinto shrine to pray for health, business, love, fertility and family fourtune.

According to the shrine, manners observed may be a little bit different.

At the Torii Gate

When we walk into the shrine, bear in mind that it is considered proper manners to walk down the side of the path slowly. Generally speaking, we usually walk on the left side. Only the Gods and the priests, who serve the Gods, can walk in the middle.

After we go through the Torii, we arrive at the purification area, which is referred to as Temizuya in Japanese. This is a place for us to clean our bodies and mind before we visit the Gods. After the ceremonial purification, we can visit the Gods in a pure state of body and mind.

After the cleaning, we will head to the worship hall, which is referred to as Haiden in Japanese. As mentioned earlier, ensure you have removed your hat and check you are not walking down the middle of the path.

After that, we can head to the offertory box and then make the money offer. Making money offering has a special meaning. It shows our intention to abandon material desires and pursue unselfishness. Usually, there is no specific amount of money that you should throw but many people throw 5 yen coins. This is because “5 yen” has the same pronunciation as “ご縁” in Japanese, which means good luck. Thus, you can often see Japanese people collect 5 yen coins to pray for good luck.

After the money offer, we should move back to the front of the hall, deeply bow two times with the respect to the Gods. After that, put the hands together in front of the chest, slightly slide the right hand backward, and then clap the hands twice with a beautiful sound. After clapping the hands, slightly slide the right hand back, pray to God, and put the hands down. The movement of sliding hands means that God and we have not been integrated into one. After we clapping two times, then God has been called to come into our body. Sliding the hand back means that we have become one with God and our prayer is likely to be answered.

Finally, deep bow to the hall, step back, slightly bow again, and then leave the hall.

What Do You Think About Manners and Etiquette at Shinto Shrines 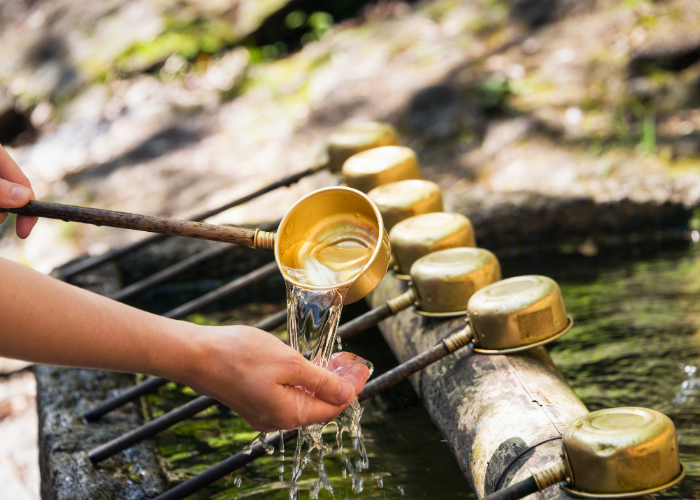 Did you know these Shinto shrine manners? Take note of these manners when visiting Shinto shrines and have a good time!