What You Can Do at Konbini, Japanese Convenience Stores | Guidable

In Japan, convenience stores are called konbini (コンビニ) which are small shops that opens 24/7 and where you can find everything you need.

There are more than 50,000 convenience stores throughout Japan. Lawson, Family Mart and Seven-Eleven are the three biggest konbini chains in Japan. In addition to those three there are also smaller chains like Ministop, Circle K Sunkus, and Daily Yamazaki.

Convenience stores in Japan are fairly different from those of other countries. They are located on every street corner, even in small cities and rural areas. You just need to step out of your house for a few steps and you will then see a konbini right away. Not only are they convenient (just like its name) they goods they sell are also relatively inexpensive.

And since the majority of them are open 24 hours, they often become lifesavers when you desperately need something and have nowhere else to go.

Lawson can easily be identified by their white and blue logo. Their main stores have all the normal basic essentials but they also have a few other offshoot chains with a different focus or inventory. As the above picture indicates, Lawson also has a chain of “Natural Lawson” stores that have a focus on a more healthy lifestyle. The products in Natural Lawson are supposed to be made with natural ingredients. Here you will not find as many of the GMO or heavily processed foods.

There are more options for produce, more low-calorie and small prepared lunch items, and even some freshly baked treats from their delicatessens. This is a great option if you are trying to watch what types of food you eat but also on a budget. You can still find a lot of your everyday non-food items as well because, after all, it is still a Lawson. 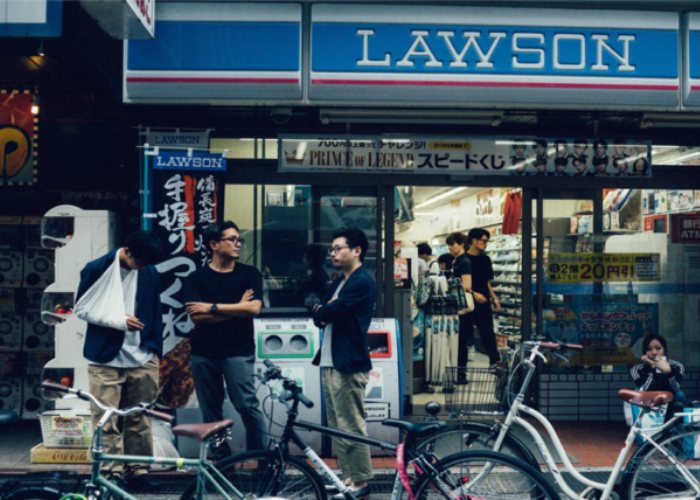 Another Lawson brand chain is “Lawson 100” which has a green sign instead. Like many other 100 yen shops, the items offered at these stores are offered at 100 yen (plus consumption tax), but this still includes small prepared meals and fresh produce. These stores tend to be found in more residential areas.

7-Eleven is an American company that was able to find a significant foothold in the Japanese market and is now one of the top 3 major convenience stores in Japan. 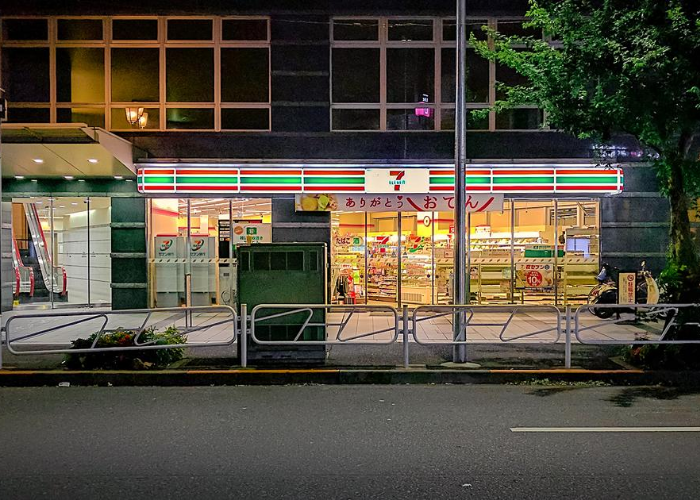 Family Mart is often referred to as “Famima” in Japanese. You can easily spot a Family Mart with their bright signs and simple blue and green logo. Their line of unique branded products is called the “Family Mart Collection”. They also have a good selection of hot ready-to-eat foods like steamed buns, karaage, and hash browns. 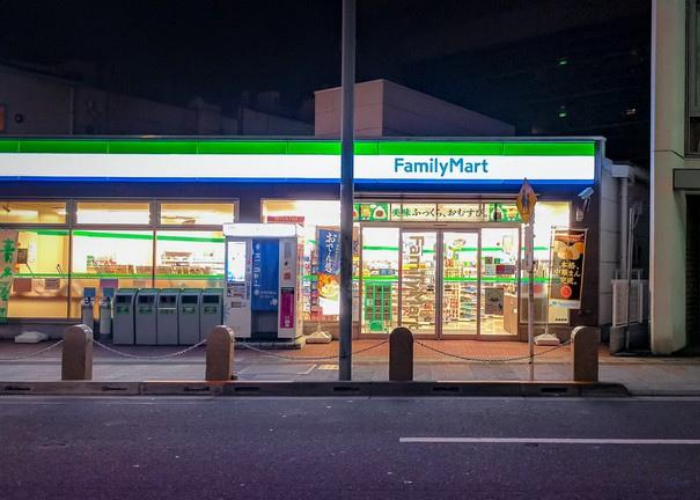 Other common convenience store chains include New Days, Daily Yamazaki, Sunkus (now part of Family Mart), and Ministop as well as some other less common ones depending on where you live.

What you can do in Konbini? Extra Services Offered in Konbinis in Japan

There are many services offered by convenience stores in Japan that may not be common in other countries.

Besides other methods of bill payment, you can conveniently pay the electricity bill, water bill, phone bill at a konbini. 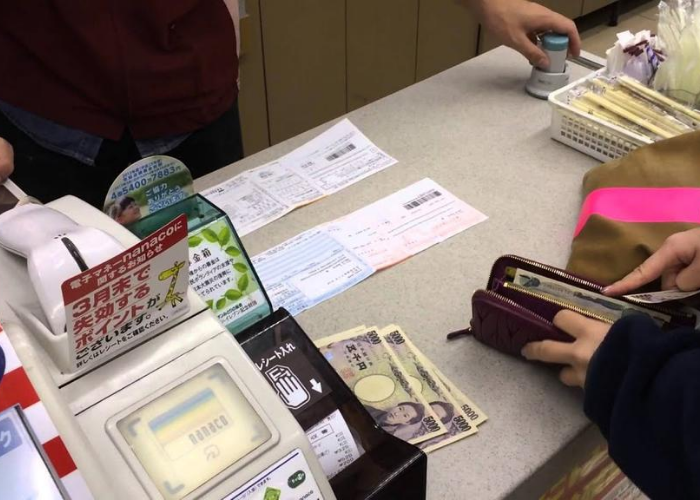 They do have online payment systems set up, they quite often do not have them available in English, which is understandable. However, you can simply hand the cashier your bill, press the big “OK” button, and pay that water or electric bill quickly and easily. It is such a common occurrence that the staff always know what to do and almost no Japanese is required

If you do not have printers at home, you can get copies and send faxes inexpensively and easily at a konbini. 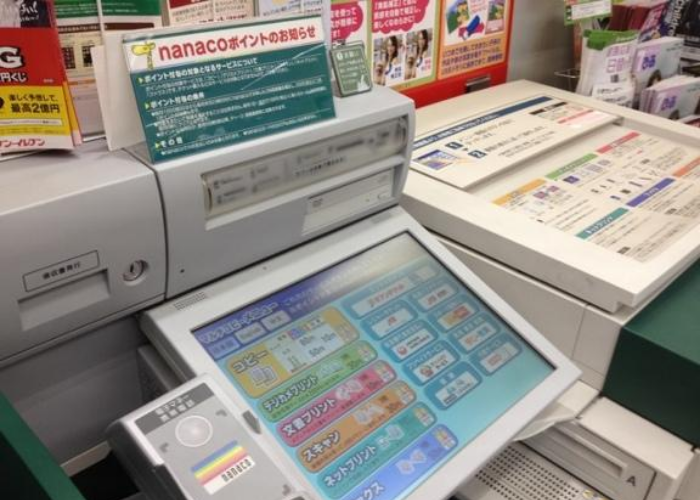 Sometimes you just have to print something, and at the convenience store, you can! Whether it is a high-quality picture, official documents that you need to sign (common for us foreigners), or a map for directions when you do not have battery life on your phone, the Konbini is the place to go. The newer machines also have instructions available in multiple languages including English, and if they do not, the staff is always happy to help. The cost is also pretty inexpensive at around 10 yen for simple black and white pages and around 50 yen for color copies.

At many stores, it is possible to deliver and pick up parcels or pieces of luggage. 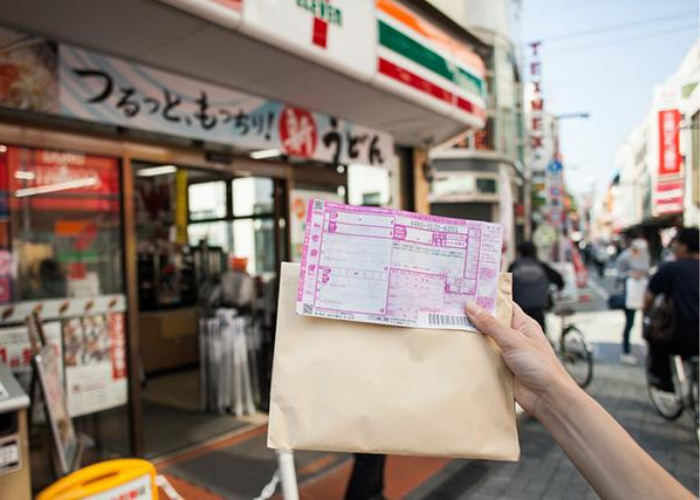 Have you ever ordered something online? What do you do when the package has to be delivered during the day and you are at work? A lot of people do not have a safe place that packages can be delivered in their absence that is safe from theft, weather, or other damage. Well, in Japan, you can have almost any package delivered to your nearest convenience store. If you are shopping through a Japanese website they will usually have an option that you can click for your parcel to be delivered to and kept at a convenience store of your choosing (an additional fee may apply). And since convenience stores are almost always open you can pick up your item whatever time is good for you! This definitely helps avoid the stress of trying to make sure you are home in a 3-hour delivery window while sitting and waiting.

Out of cash? konbini offers cash withdrawal and other banking activities. Both credit and debit cards are accepted by ATMs at convenience stores. (All ATMs at Seven-Eleven stores accept foreign cards.) 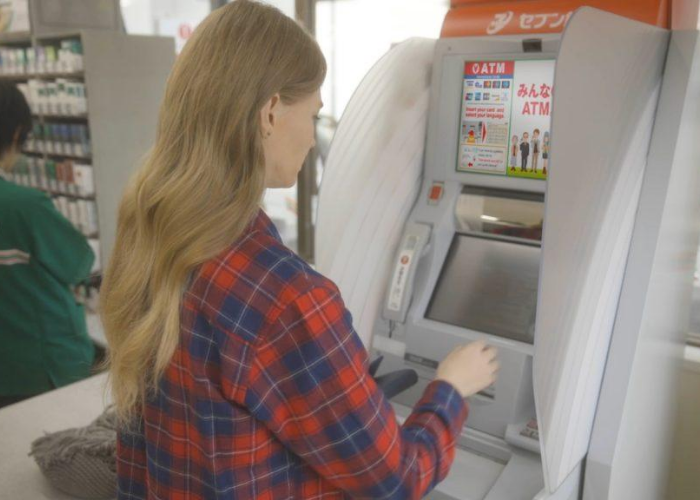 Have you ever needed to buy something but realized that you do not have any cash and they do not accept credit or debit cards? Japan is still a largely cash-based society, and there are a lot of stores and services that are cash only although the government of Japan has decided to push for cashless payments last year. The convenience store bill pay service, for example, is usually cash only. If you have an account with one of the larger banks in Japan then you can sometimes find an ATM with your bank. However, if you cannot, then the convenience stores have you covered. The ATMs at convenience stores accept almost every type of card. They even accept some kinds of international cards. Some transaction fees or international fees may apply but they tend to be pretty low. So, if you find yourself stuck with no cash, get to your nearest Konbini and you will be alright.

The wi-fi of Konbinies is not unlimited so Guidable team would not recommend trying to sit in a Konbini for hours to get some work done like at a coffee shop. But they do offer free wi-fi for various lengths and different numbers of sessions per day which can be the difference between wandering aimlessly for another hour and getting back on the right path. 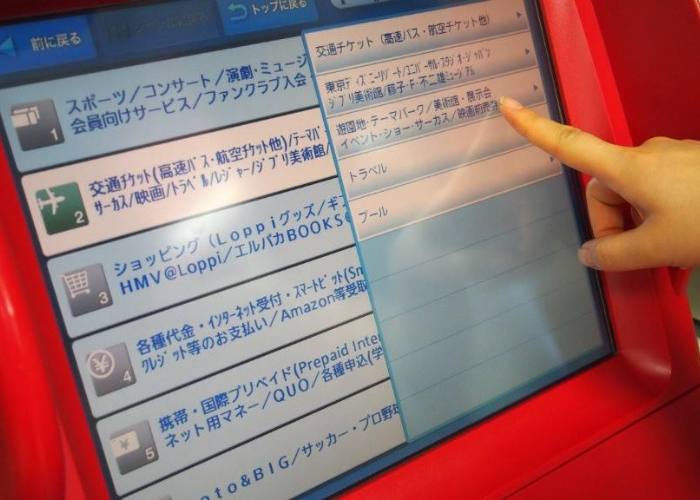 Activity tickets such as limousine bus and amusement park entrance tickets are can also easily be purchased at a konbini, which saves people time queuing for tickets. Besides that, konbini also offers delivery services, which can save you a lot of effort from pulling one large suitcases as you tour the land of rising sun.

Japanese people love everything that is handy and ready for use. It is probably the reason why there are numerous konbinis in Japan. The population of Japan is about 125 million people, and Japan now has more than 50,000 convenience stores nationwide. That means that there is roughly 1 convenience store for every 2,500 people.

So, no matter where you live in Japan, it is a safe bet that your nearest Konbini is right around the corner, maybe even closer.Konbini brings great benefits to everyone and makes life easier for people living in Japan, be sure to check them out frequently when you are visiting Japan!