Move to Japan: Getting a Mobile Connection | Guidable

Move to Japan: Getting a Mobile Connection

What could be there to read about something as simple as getting a mobile connection right? Well, you will be in for a rude shock if you thought you could just go to a store and get a SIM card for your brand new smartphone that you bought before coming to Japan.

Major network carriers such as docomo, SoftBank and au require you to sign a two year contract with them if you would like to use their service.

There are several documents you need to prepare such as your Alien Registration Card (ARC), address proof, bank passbook, visa copy, stamp etc. However, having all these documents does not guarantee you to make a contract. Mobile companies sometimes will refuse to make contracts with foreigners in most stores across Japan. In my case, I visited several stores (au, docomo and SoftBank) multiple times in an effort to make a contract but was denied each time until I was accompanied by a Japanese person to make a contract.  If it is possible, get a Japanese person to accompany you when you visit a mobile store. The success rate of making a contract would be higher if you provide your credit card details, as against your bank account details. It provides them some assurance for your monthly payments.

Usually, a phone bought from one carrier will not work with other carrier as they are “Locked”.
For example, a phone bought with au will not work with a SoftBank SIM. Currently, docomo and au “Unlock” their phones after a period of six months for a fee. SoftBank is still implementing this rule. However, iPhone 6s is not unlocked by all these three carriers even after six months of contract time.

In May 2015, The Ministry of Communication passed a rule compelling carriers to unlock their phones to bring in competition and in hope to bring down mobile phone bills for customers. They are also aiming to increase the number of Mobile Virtual Network Operator (MNVO) carriers who will provide SIM cards for data only or voice only or data & voice services. This is a welcome change as some of the MNVO operators such as Yahoo, Rakuten, BIC SIM, Asahi-Net started offering contracts of lesser duration (around one year) or no duration for their customers since recently. Their bill plans are much cheaper than the major carriers and offer flexibility in terms of contract termination. Making a contract with one of your MNVO carriers also allow to use your SIM free smartphone and avoid spending on a new phone. 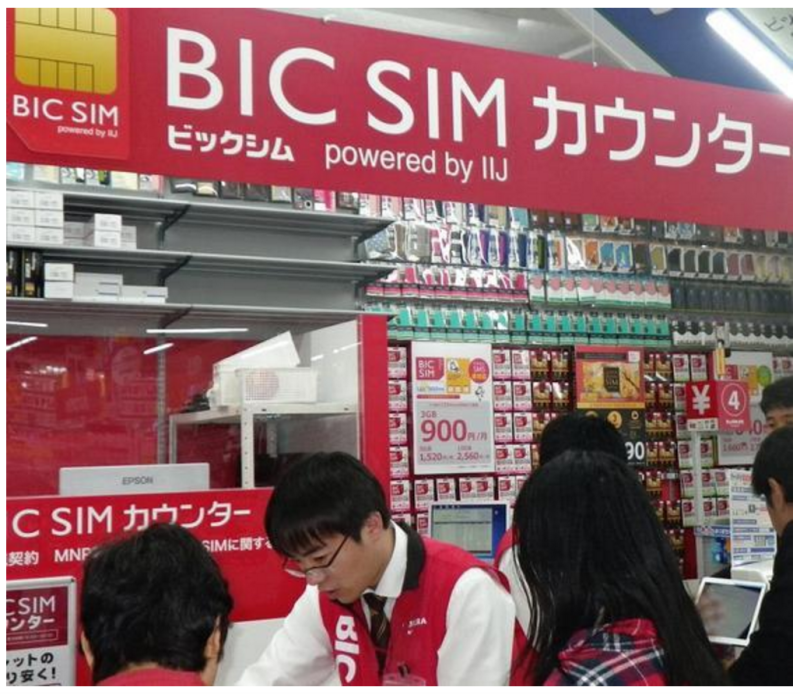 A BIC SIM shop in an electronic store
[Reference: http://asia.nikkei.com/]

The best place to find a MNVO operator shop would be the large stores such as BIC Camera, Yamada Denki and Yodobashi Camera. These carriers, however, can also be found in some of the smaller stores with less frequency. Although, Yahoo has exclusive stores the other MNVO carriers generally do not have exclusive stores. Carriers such as Asahi-Net also receive online applications and deliver your SIM to your residence after verification.

The following is the list of websites of some of the MNVO carriers:

The following is the list of websites of three major carriers: