Japan is a nation that is spending less and less on international travel each year and it’s no wonder, considering the rising costs associated with travelling—especially in the wake of the COVID-19 pandemic. In order to cater to those who either can’t afford international travel or perhaps don’t want to leave the country, various companies and organisations have come up with the idea of creating amusement parks in the shape of small international villages to help fulfil an interest in the outside world.

Let’s take a look at some of the most interesting international villages in Japan!

Japan’s love of traditional, rural England has led to the creation of more than one British Village around Japan (read about Niji-no-Sato British and Canadian villages here). However, the most famous of them all is probably Dreamton Village in Kyoto. Located in the suburban city of Kameoka in Kyoto, Dreamton is based on British culture from the 1800s and rural life in the famous Cotswolds.

Wonder around the small village and enjoy the strange feeling of being in this blend of the English and Japanese countryside.

While there, you can even enjoy a portion of fish and chips with peas or sit down to high tea. While they may not be the most authentic fish and chips or afternoon tea on the market, they’re definitely worth giving a go. 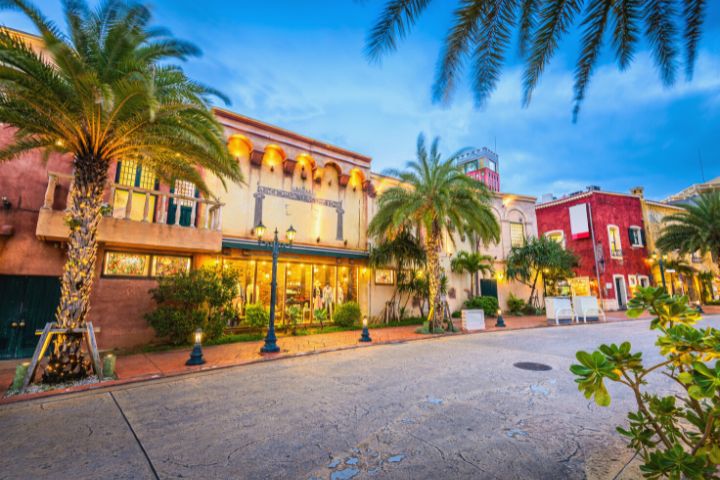 Just a short walk from Chatan beach in Naha is Okinawa’s American Village.

Considering the heavy American military presence in Okinawa, it’s no surprise that an entire America-themed Village had made its way to Okinawa’s shores. Filled with shops and restaurants, it’s the perfect place to spend a day shopping and enjoying Okinawa’s specialities.

While the American Village is home to only a few truly American-themed shops and restaurants, it supports a series of local and international brands and restaurants (including one that specialises in Taco rice, a delicious creation born from Mexican-Japanese culinary exchange) that are worth a look.

If you’re looking for a place to take photos, or want to pretend that you’re abroad for a day, however, Okinawa’s American Village is the perfect place to do, all while being stood nearby by one of Okinawa’s picturesque beaches.

The resort is split into several areas, including the Alhambra, Andalucia and Castile zones based on Spain, the Sardinia zone based on Southern Italy and the Mykonorca zone based on Mykonos island on Greece.

The warmer climate and white-washed buildings are sure to transport visitors to Southern Europe during the warmer summer months, while the restaurants offer a chance to try a mix of delicious Mediterranean foods and several delicious Japanese dishes.

Stay overnight for the complete dining experience (from ¥25,450 per person) or visit for a day and take part in a few of the activities the resort has to offer.

If you want to enjoy the experience of staying at the resort without the commitment, try their one-day room use plan (from ¥12,250 yen per person), which includes lunch, use of the sauna, a room, and the pool for the day! 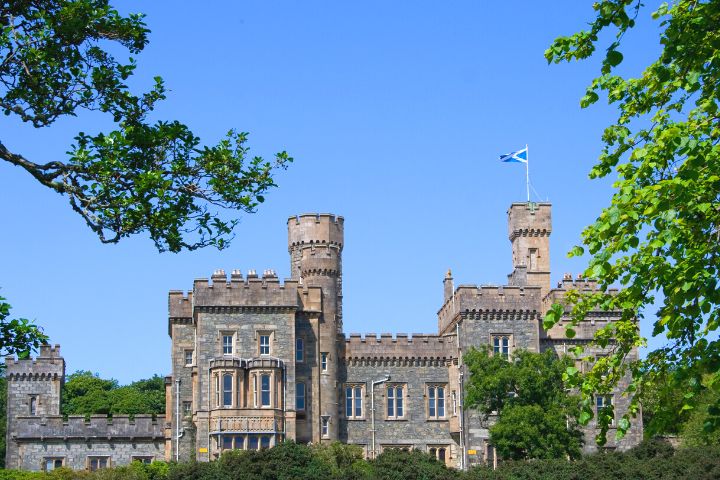 Located deep in the heart of Gunma is Lockheart Castle. Built during the Industrial Revolution by the Lockheart family in Scotland in 1829, this very large and very European-looking castle was transported to the mountainous landscape of rural Gunma via the Siberian railroad in 1988.

Since its relocation to Japan, the castle has been expanded into a park which includes a small medieval-themed village that sells English and Scottish souvenirs and trinkets.

While there’s a lot to see here, the oddest thing about this small piece of Scotland is the exhibitions inside—the most notable of which is the notorious ‘World Santa Museum’ which is a collection of Santa memorabilia collected from all over the world. (The strangest exhibition, in my opinion, however, definitely has to be the collection of rocks painted to look like food).

Even the castle itself, which was built by the descendants of Sir Locard—the fabled knight who carried Robert the Bruce’s heart to the holy lands—has become known as a good-luck charm for those looking for eternal love, which has made it especially popular with younger couples!

In fact, as you walk around the small village, you will be greeted by the sight of heart-shaped padlocks and decorations all about the place, as well as the Spring Bell, which ensures lasting love when rung!

Nowadays, the park is used for weddings and as the setting for TV and film shoots in Japan, however, everyday visitors to the castle can dress up as a princess or prince and have their photos taken around the castle!

From Burkina Faso to Polynesia, explore a microcosm of the world and many of its cultures all in the space of a day! Not only is the museum an experience in cultural diversity, but also a short lesson in anthropology. As you enter the museum, learn about the start of civilization as well as the languages, rituals, religions and cultures of various groups from around the world.

As you wander around the different areas of the open-air museum, try on the native clothing of several countries and taste various local cuisines all while learning more about different cultures. From spit-roasted crocodile to churrasco burgers, you can rest assured that there’ll be something new to try.

Although these small internationally-inspired amusement parks can’t replace the experience of visiting the real thing, they do offer those in Japan a chance to connect with other cultures and learn a little more about the world outside Japan.

Why don’t you visit one of these interesting amusement parks and experience travelling abroad for a day!