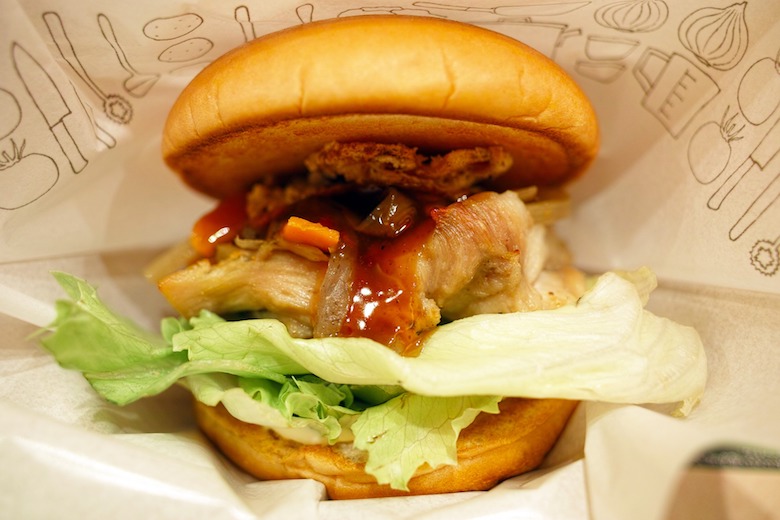 From 21st June 2017 to 27th June 2017, the new product of Mos Burger is released! This newly released product is derived from an ordinal burger, as there is no bread exist in this burger; the new burger is made by only meats! Let us see the composition of the burger. The burger composes of two layers of meat, and three pieces of vegetables. The bread part of the burger became meat, and the teriyaki chicken and vegetables are in the middle of the burger. How it this burger invented? Let me talk about the background of the new release of this product.

This is a part of a TV program!

At first, the suggestion of this niku-niku-niku burger was made long ago, but it was rejected because it lost the competition among other products. However, in yesterday’s TV program, “Hiroyuki Ariyoshi’s Daretoku!?’ the TV stars tested six product of Mos burger that was not able to sell on the market, and chose this Niku-niku-niku burger!

When is it going to be sold?

It is released on 21st of June, 2017, and it is going to be on store for only one week! That means that you will not be able to taste it after 27th June. If you want to try this out, go to the Mos Burger shop, as it will be available in most of the mos burger shop in Japan!

What is Mos Burger?

MOs burger is one of the second largest fast food franchise in Japan after McDonalds Japan, and it owns numerous overseas outlets over East Asia, including Taiwan, Singapore, Hong Kong, Thailand, Indonesia, Australia, South Korea. It’s head quarter is in the Think Park Tower in Osaki, Shinagawa, Tokyo. The original Mos rice burger uses a bun made of rice mixed with barley and millet. In 2003, Mos burger introduced an ultra-premium Takumi Burger, means artisan taste series. The Nippon’s Burger Takumi’ hamburger was made with Tasmanian beef and the toppings, including sliced avocado, grated wasabi, and another gourmet, seasonal ingredients. It was available for a limited time and cost 1000yen making it one of the most expensive burgers offered by a fast food chain. As you can notice, Mos Burger put more effort on the quality of the food, while McDonald competes on speed. Therefore, when you receive your meal, it looks the same as it does in the menu pictures,
The menu offers a good selection of beef burgers, a chicken burger, and a fish burger, so you can get any burger you want to a high-quality standard. I enjoy going to Mos burger a lot because the quality of the food is guaranteed as they put a strong emphasis on the taste of the food. As I am a huge fan of Mos Burger, let me talk about the good point of the Mos Burger.

Second, the hamburgers they are serving out-stands most of other fast food shop. Adhering to what they regard as the gold standard for hamburgers, the high-quality patties consist of groud pork and beef that are both exclusively sourced domestically and come in a jumbo size that is 50% larger than regular patties. We have been extremely particular about quality and created patties that are worthy of the name ‘tobikiri,’ which means high quality or premium by their juicy and soft texture.
What are the special types of Mos Burger?
MOS Burger’s iconic hamburger and a cheeseburger are very special compared to the burgers of other chains. In addition to the patty, buns, and cheese (if you ordered the cheeseburger), the burgers come with a thick slice of tomato, chopped onions, meat sauce, mayonnaise and mustard. The tomato and the meat sauce add a fresh and unique taste to the burger.

There is also a fish burger, a teriyaki burger, spicy burgers, shrimp burgers, chicken burgers, burgers wrapped in lettuce instead of buns, and several special items that are limited offers. International chains might have a different menu as well. In addition to the burgers, MOS Burger also sells hot dogs, fried chicken, onion rings, chicken nuggets, salads, and more.

They collaborated with JAL before!
Here is one interesting fact you may want to know. They also collaborated with JAL before to serve a second meal on a select flight from Japan to NOorth America, Europe, and Australia routes starting March 1, 2015. The menu in the
The new menu is the fifth collaboration of a series of innovative inflight menus jointly designed by JAL and MOS BURGER, following well responses received by customers with AIR MOS TERIYAKI BURGER, AIR MOS RICE BURGER, AIR MOS TERIYAKI EGG BURGER and VEGETABLE AIR MOS BURGER. Why do they collaborate? It might be because of they want to represent MOS BURGER’s respect for Japanese food culture and JAL’s commitment to providing high-quality products and services with the spirit of Japanese hospitality. So, Mos Burger is playing an important role in promoting the value of Japanese Hospitability!!