Can you really avoid all the bugs in Japan? The short answer is “no”. However, I will do my best to help you prepare and make the bug (mushi) seasons as manageable as possible. During the Summer, all of the bugs come out of their burrows. Japan has a lot of different kinds of bugs and insects that love the warmer months of the year. Some of them are common around the world, but there are also many that foreigners may not be familiar with. In this article we will cover the common bugs in Japan, their relative active time frames in the year, and what you can do to be prepared and beat the bug season. 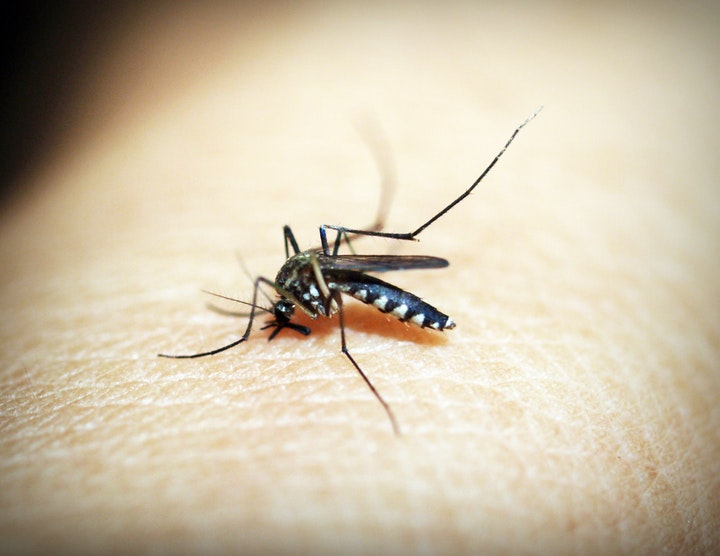 In Japan, as with most places, you do not have to worry as much about bugs and insects during the colder and Winter months. However, when temperatures start to warm up and become more pleasant, that is when you need to start looking out for bug problems. The first part of the year that this becomes a major issue in Japan is the rainy season. This is roughly 3 or 4 weeks and usually centered in June but occasionally drifting into July. Thanks to all the extra rain and moisture, this is when you will start to see the centipedes, mosquitoes, wolf spiders, and fireflies come out. Then we move into the hot and humid July and August summer, with temperatures peaking in August. This is when the cicadas will be in full swing, but, trust me, with thousands of them singing it will be quite obvious. Also, cockroaches will likely be seen throughout the warmer seasons. In the next section, we will cover the more common bugs, some basic facts and information, and how much you should be concerned about them.

What are the Common Bugs?

These little flying nuisances are the bane of my existence in Japan during the hot months. Mosquitoes (ka) really become a problem in late spring when the rainy season results in enough standing water everywhere that they can mate and multiply by the millions. Unfortunately, they then stick around through Summer into the Fall, making July and August even harder to bear. They can be extremely hard to avoid as they infest cities as well as the more rural areas.  Japan also has a common species of mosquito called Tiger mosquitoes that are identifiable by their white tiger-like stripes. None of them are poisonous, but it only takes a few seconds to get bitten and you can end up perpetually covered in tiny, red itchy bumps. I usually end up spending a few weeks a year vigorously scratching at my arms and legs from all the bites I receive when I forget to bring my bug spray.

In Japan, cockroaches (gokiburi) can be found almost anywhere from spring through fall. I actually just found one crawling by my bed a few weeks ago and had to get rid of it. The startling thing about cockroaches in Japan, that I learned the hard way when I went to throw my captured intruder outside, is that they can FLY! However, this is usually only when necessary and they prefer to scurry around. Do not worry, you will not see cockroaches buzzing around in swarms like bees or mosquitoes. They are extremely common all over Japan and are not really much of a threat. They are mostly just annoying and disconcerting as they can slide in through slits in doors, windows, exhaust vents, or even through some drains. Try not to squish them if you can avoid it and do your best to just get them back outside, preferably not too close to your home (encouraging them to go elsewhere). If you have a frequent issue with them there are a number of anti-gokiburi products available in Japan (more mentioned below).

These multi-legged monsters always terrify me (and with good reason). The variety most commonly found in Japan is the Chinese Red-Headed Centipede (mukade). They come out during the wetter season and love to sneak inside homes and apartments to stay dry. These centipedes are typically more of a concern in the more rural and forested areas but do not be surprised to find one in the city. They are pretty aggressive and their bites have been described as similar to a strong electric shock or up to ten times worse than a bee sting. Though these bites are not really fatal, if you do happen to be bitten by one of these bugs, you should rinse the area under warm (not cold!) water and seek medical help quickly. Their red, black, and yellow coloring is very distinctive and they can grow up to 20 cm making them easy to spot. Try not to pick a fight with them, but if you have to get rid of one, do so very carefully. Try not to squash them as that may attract many more. And NOBODY wants that!

Giant Hornets (suzumebachi) in Japan are the largest in the entire world, growing up to 4.5 cm! Luckily for us Tokyo people, these terrifying insects tend to stay in the more rural areas of Japan, though they can be found all over the country. These threats are easy to recognize (as they are painted like caution tape) with bright yellow heads and abdomens. Avoid at all costs! Giant hornets are very aggressive and will sting if they feel threatened. If you happen to get stung by one, remove the stinger and squeeze (don’t suck!) out the venom as best you can. Then you should head to the nearest hospital just to be safe. Their sting is venomous and, although a single sting is painful but manageable, multiple stings can be fatal! So, if you find a nest of them, leave quickly and quietly. 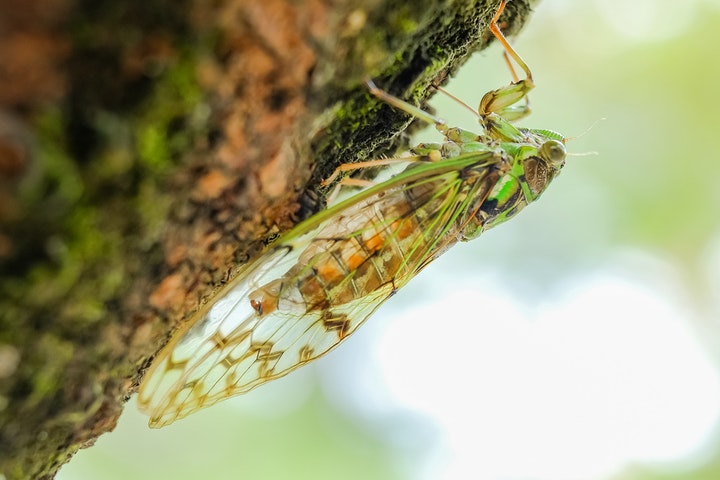 In my opinion, it is not truly Summer in Japan until you hear the deafening chorus of seasonally sonorous cicadas (semi). They are as much a part of Japan’s natural landscape as crows (karasu) or cherry blossoms (sakura). They are only around for a couple of months in the Summer, peaking in late July and August. Though inescapably noisy, these winged insects are fairly harmless and spend most of their time stuck on trees singing or shedding their skins all over Japan. Just imagine them as unoriginal street performers that you do not have to tip. They will probably not try to come into your home and they do not bite. So just sit back and enjoy the free Summer music of these bulbous bugs that are akin to nature’s dial-up modem.

Whether you are planning a hiking expedition or just a trip to the local park, there are a number of things you can do to prepare and protect yourself from the Summer bugs. All of the drugstores and many of the convenient stores around Japan will have anti-bug products available for purchase. If you are just heading out for a nice day, you can buy a generic bug spray that you apply to yourself to ward off harmful insects like mosquitoes and flies. They are generically called mushiyoke and sometimes come in a few different strengths, the weaker ones being safer and more appropriate for young children (I got the stronger one for myself). This is a must buy if you are tired of being eaten alive by mosquitoes on a hot day after a strong rain. Save yourself several days of itching by stocking up on a few bottles of bug spray.

If you are not to keen on chemicals or you happen to have sensitive skin, Japan also has a long history of mosquito repellent smoke coils. These mosquito coils (katori senko) are lit at the tip and burn slowly in a spiral. The smoke they give off keeps mosquitoes away and some of the larger coils can last all day. You may see these around parks or Japanese gardens in the Summer, and they work fairly well.

If you have more of an infestation problem with bugs like cockroaches moving into your home (without paying rent) do not worry. You are not alone. Japan also sells a variety of trap-based “roach hotel” style products to deal with the scurrying more invasive bugs like cockroaches. These traps, like ones you may have seen in other countries, attract all of your little pests and either trap them inside and stick them in place or feed them something that, shall we say, does not agree with them. Either way it is much better than trying to capture them, and it is way better than trying to kill them yourself (as mentioned above that can actually make your problem worse). Just look for any box with gokiburi on it or pictures of cockroaches. They are easy to spot. There are also generic bug traps to deal with a variety of pests such as fruit flies, mites, ants, etc. Just leave a couple of these traps around your most affected areas and they should get the job done pretty quickly. 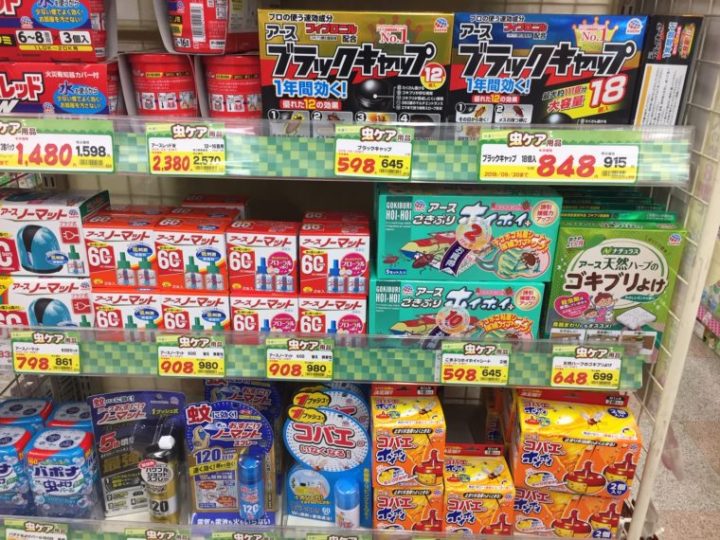 Routing and Planning Your Trip

Most of these bugs are more of a problem if you are in more wooded or rural areas. This would not be too big of a deal except that Japan has an incredible amount of awesome wooded and rural areas to explore. There are tons of tourist attractions, amazing hiking trails, remote temples, castle ruins, mountains, and other places worth visiting. When going to higher risk areas of Japan, there are a few extra things you can do to protect yourself. If you plan to go hiking, make sure to wear thick hiking boots that will protect your feet. Sandals or other open-toed shoes are just asking for trouble. Even if the weather is hot or balmy, try to reduce the amount of exposed skin by bringing or wearing lightweight outdoor clothes with long sleeves and long pants. This will cut down on the number of mosquito bites you would be susceptible to if you wore a t-shirt and shorts. Also, make sure to bring some of the previously mentioned anti-bug products like mushiyoke to make yourself a less appetizing target. And do yourself a favor and spend some time researching the area you plan to visit. A short internet search and even some area or city websites may have guidance or advisories on more common or local threatening wildlife. If you are traveling to a high-risk area, try to stick to well-traveled areas or paths with other people that the local wildlife know to avoid. If your destination does include some particular poisonous creatures, consider searching for and, if it is available, bringing along some anti-venom or anti-toxin. And, as always, stay hydrated. If something does happen and you get attacked, bitten, or stung by something poisonous, you do not want your body to have to fight off dehydration as well as foreign toxins. 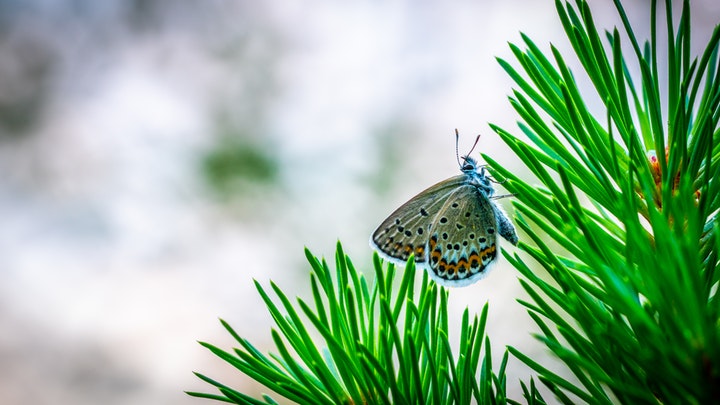 With your kit now set, do you think you can evade the summer bugs? Which particular bug do you have the most trouble with during the warmer months? Do you have any special tactics or remedies for dealing with them? Some of the best areas of Japan are worth the risk of bugs. What are your favorite areas to explore in rural Japan, and what bugs did you have the most problem with? No matter where you are headed this Summer, make sure to stay safe, stay smart, and never stop exploring!