《What is Shichi Go San?》

Japan has a tradition for children aged seven, five, and three on November 15th, which is called “Shichi Go San” festival. Basically, they celebrate children’s healthy growth, and parents take their children dressed in kimono to Shinto shrines and have a purification ritual. It is said that the origin of the festival was the celebration for the healthy growth of a son of a General in Edo Period. The day of November 15th also has some important meanings. November is the season when people finish harvesting, so people began to celebrate for the good harvest on the day. It has also been believed that any events would be pleased to be taken place on 15th of every month because no demons walk around. Afterwards, people began to pray for Gods’ blessing their children as well as thanking for good harvest. 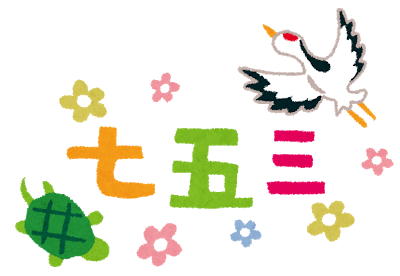 “Shichi Go San” festival began in Edo Period, and the following rituals are rooted in Kanto prefecture where the capital “Edo (Tokyo)” is located.

#1: At three years old (mainly for girls): “Kami-oki-no-gi” is the ritual when parents begin to leave their children’s hair growing while they used to have their hair shaved until the age of three in Edo Period

#2: At five years old (for boys): “Hakama-gi-no-gi” is the ritual when boys begin to wear Hakama which is one of the traditional Japanese wear.

#3: At seven years old (for girls): “Obi-toki-no-gi” is the ritual when girls begin to use the same type of “Obi” as the ones for adults which is Japanese belt for kimono. 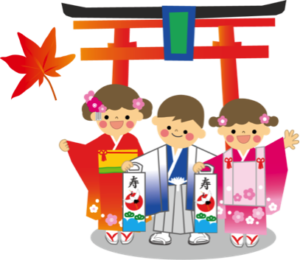 Children at a shrine

Children who have each ritual will be given “Chitose Ame” which is special candies for “Shichi Go San.” “Chitose” means 1000 years in Japanese which is a symbol of longevity. Parents hope for their children’s longevity with “Chitose-Ame” whose shape is thin and long. The color, “Kou-Haku” (red & white) is also a symbol of good luck. The bag for “Chitose-Ame” is also designed with symbols of good luck in Japan; cranes & turtles (Tsuru-Kame), or pine, bamboo & plum (Shou-Chiku-Bai.) 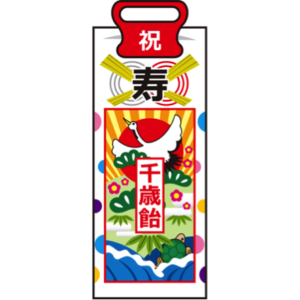 Nowadays, the event of “Shichi Go San” has been simplified, and many parents are eager to have their children taken memorable pictures at photo studios. You will be surprised to see photo studios in Japan especially in the season of “Shichi Go San.” In some big studios, hundreds of special clothes and experienced staffs are waiting for you. You need not to prepare anything but money for getting memorable photos. Please refer to the following links if you want to have your children taken memorable photos in Japan.

《How do you celebrate?》

The celebration of “Shichi Go San” varies from area to area or from family to family in Japan. In some areas in northern part of Japan, people may celebrate the event 1 month earlier because of the cold weather. On the other hand, some families celebrate the event earlier or later avoiding the crowd at shrines or at photo studios. No matter when we celebrate the event, we always wish for our children’s happiness, and share precious time with them. How do you celebrate family events in your country or in Japan?