Have an important final test coming soon that you cannot fail, even if you have known everything inside and out?

Leading in a major project and success will ensure your promotion?

All you need is a little bit of luck!

Sometimes, all we want is also a bit of luck, and so do the Japanese.

Looking back at Japan’s turbulent history, the country had undergone a series of devasting natural disasters – earthquakes, tsunami, typhoons, and volcanic eruptions. Learned from these “bad lucks”, the Japanese began to take luck more seriously and from there, superstitions regarding luck were born, and have been playing an important part in the country’s culture until this very day.

So, just how superstitious are the Japanese? 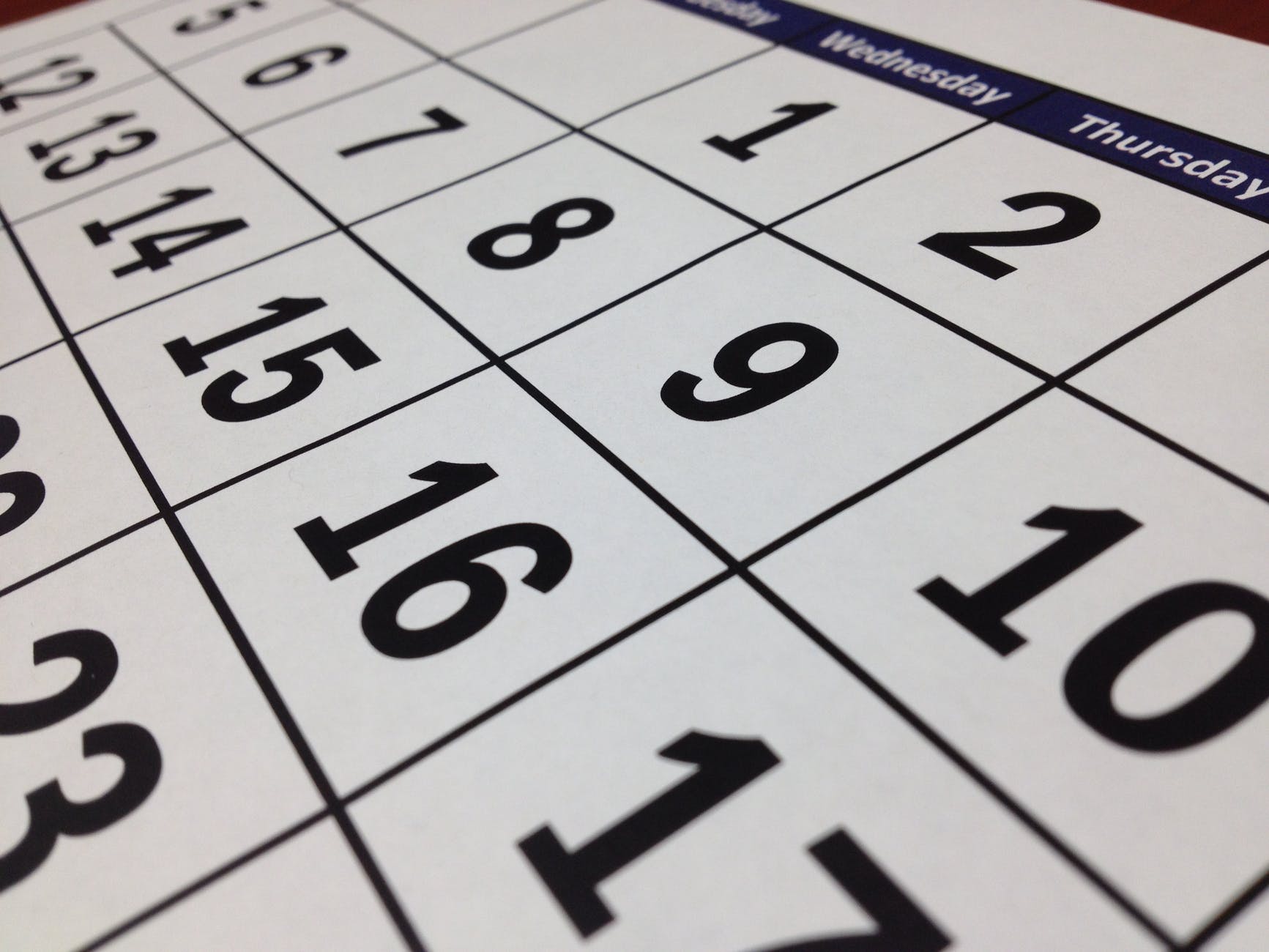 Besides the normal calendar commonly used worldwide, the Japanese also use another calendar, called the “Rokuyo” (六曜日). Sound mysterious, right?

It is because this calendar usually goes unnoticed to foreigners in general and even to the Japanese themselves. But there is more to its mysterious name: the calendar is actually a guide to know whether a day is lucky or unlucky.

If you pay attention to this Rokuyo calendar, it is easy to notice the small words in kanji below each number that mark each day. And if you look closer, you will see there is a pattern: The same kanji words are to repeat in the same order every six days. These kanji words represent the six days of the traditional Rokuyo calendar, based on the Chinese lunar calendar.

Here are the six Rokuyo (Roku – six, yo – day) and their meanings:

On this day, good luck will come to you in the morning, but not in the afternoon (especially from 2 PM to 6 PM).

Because the kanji’s literal meaning is “first come first serve”, this day is a good day to start new ventures, dealing with urgent businesses and participating in sports events.

Because the kanji is literally translated into “pulling friends”, it is best to celebrate weddings to draw your friends in the spirit of love. However, it is important to avoid attending or holding funerals on this day because it may pull your friends to the other world, and vice versa, draw evil souls to this world and causing unwanted nuisances.

On this day, good luck will only come to those who wait until the afternoon, because bad luck will come in the morning. Because the kanji’s literal meaning is “fail if hurry”, you should be patient and start to defer urgent business or resolve disputes in later in the day.

Because the meaning is “Buddhist’s death”, the day is considered to be the unluckiest day of all.

On this day, because bad luck is anticipated to come all day, it would be wise to avoid any important businesses such as weddings, moving house, opening a new shop,… and rescheduling them until the next day. Yes, simply stay in your bed would be a safe bet.

In total contrast to Butsumetsu, “Taian” is believed to be the luckiest day of all because of the meaning of the day – “great peace”. It is on this day that the majority of the Japanese choose to start their new ventures, carrying out weddings as well as other important businesses with a belief that everything will be successful and goes smoothly according to their expectation.

Make sure to mark this day as the one you choose to work your best because you will be rewarded for your hard work at the end of the day.

Although the kanji word contains a red element (赤), be careful not to mistake it with a red of luck. The day’s meaning is “red mouth” and it actually brings bad luck, except for noon time (from 11 AM to 1 PM). The red color symbolizes blood and fire, so make sure to watch out for knives and fire. Remember to make full use of your two-hour of luck before it runs out! 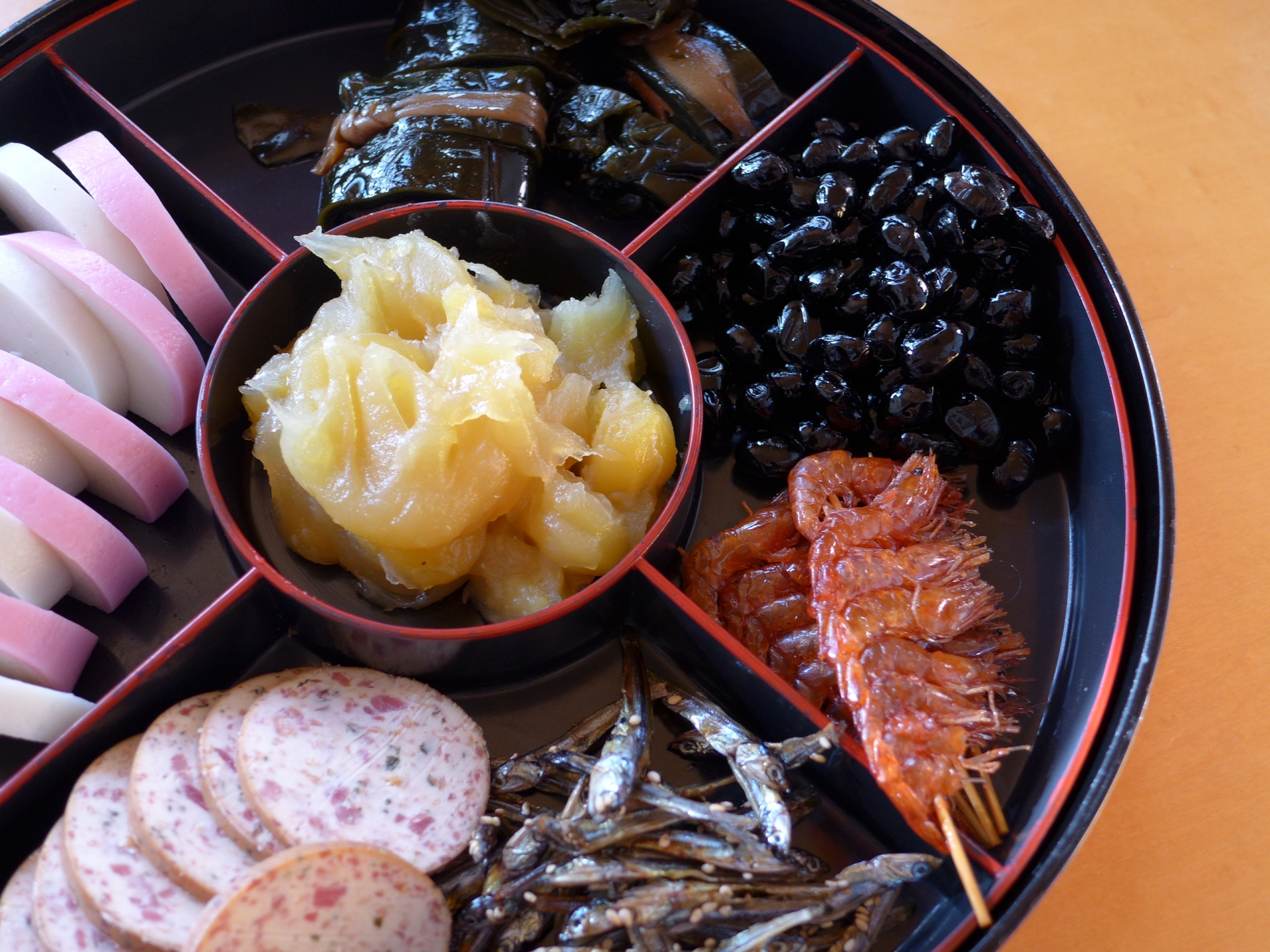 There are many New Year’s traditions in Japan, but the most delicious, most exciting tradition is the eating of Osechi – a special food eaten to give thanks and express hope, wishes for happiness and prosperity in the New Year. For the Japanese, Osechi is arguably the most important meal of the year. Why? Because each dish serving as a symbol or wish for the upcoming year. Let’s take a look at the auspicious meaning behind these Osechi foods.

* Kuromame (黒豆) – black soybeans (seasoned with sugar and soy sauce). Because the word “mame” sounds like the word for “hard work and good health”, eating this during New Year is a symbol of good health for the upcoming year.

* Datemaki (伊達巻) (sweet omelet mixed with fish paste or shrimp) symbolizes a wish for success, rapid promotion and scholarship because the shape of the datemaki greatly resembles a scroll.

* Ebi (えび) (shrimp) is a symbol of renewing life – because the animal molts its skin and longevity – because of their long antennae and curved body (like the curved back of the elderly).

* Subasu (酢ばす) (vinegar lotus root), with its many holes, is a symbol of an unobstructed view of the future.

Ehomaki is seen as a symbol of luck and is translated as “lucky direction roll” because of its length. However, the belief does not stop there – the ehomaki must be eaten as a whole (uncut roll), as cutting would be seen as ending the luck. In additions, the ehomaki’s lucky symbol also depends on how it is eaten: The roll must be eaten in its entirety in one sitting, without a single grain of rice grain left behind so that not a single bit of luck is lost. Interestingly, the roll is filled with seven different ingredients with a traditionally auspicious number.

February each year is an important period in the Japanese cultural event of Setsubun (meaning seasonal divide). Because of the unique transition between seasons, the Japanese have established the practice of mamemaki – throwing lucky beans, commonly known as fukumame inside and outside of the house while chanting “Oni wa soto! Fuku wa uchi” – “Demons out! Luck in!”. So what is the origin of luck for fukumame? “Fuku” is a homonym for luck, happiness in Japanese, and mame is a symbol of health and well-being. Another fukumame-related custom is eating beans equivalent to one’s age, plus one – an extra bean is to signify the hope to lengthen a year of living. 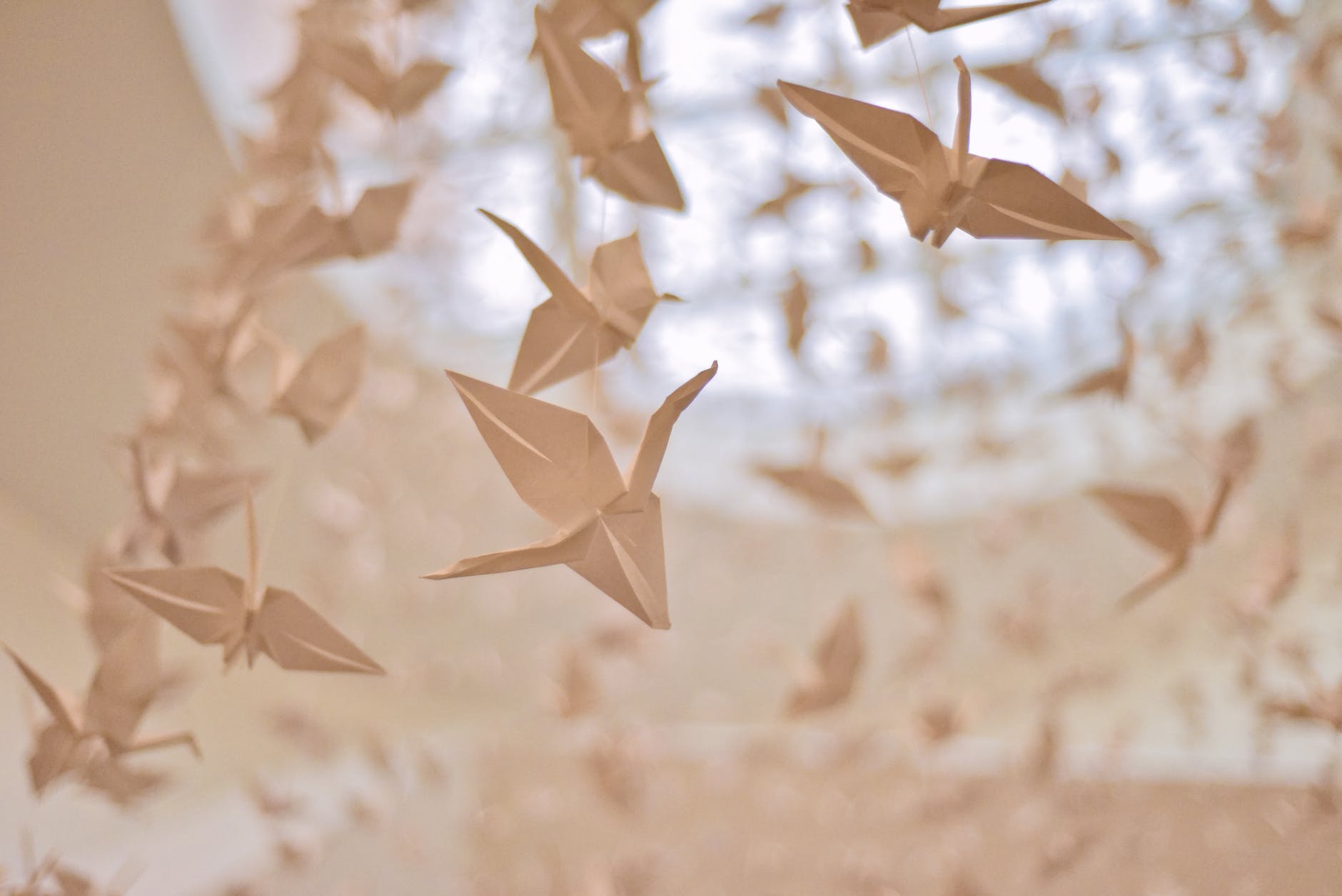 Senbazuru is a handmade string of 1000 origami cranes. It is believed that anyone who finishes making a string of cranes within a year will be granted with a wish or recovery from illness or injury. But out of all animals, why are cranes so important to the Japanese? A crane (or Tsuru) in Japan is a commonly seen symbol in most Japanese artworks and is regarded as a good luck charm for the Japanese. If you ever attended a traditional Japanese wedding, you can easily spot crane embroideries on the bride’s kimono as well as wedding presents and paintings.

Senbazuru is also traditionally given as a wedding present because it is a wish for a thousand years of happiness and prosperity for the couple. Many give Senbazuru to a newly born baby with many hopes for their good health and well-being. Many also hang Senbazuru inside the home to bring good luck and ward off bad lucks.

Remember the famous scenes from The Notebook, Breakfast at Tiffany’s and Chasing Amy where rainy days are always followed by passionate kissing in the rain? Yes, those scenes. I don’t know about you, but my life does not usually work that way. In reality, to some, rain always brings a feeling of melancholy, loneliness, or simply irritation and anxiety because tomorrow’s outdoor barbecue party might be canceled.

If you live in Japan long enough, you will know that among the common four seasons in Japan, there is also a specific “fifth season” that brings anxiety to the Japanese – rainy season. Unfortunately, this rain season comes at a time when most of the outdoor festival or harvest events are held. And of course, they have a quick remedy for that too! A Teru Teru Bozu Doll!

Teru Teru Bozu or “Japanese rain-prevention dolls”, are traditionally handmade dolls made from tissue paper or cloth, usually white and ghost-like in appearance, and usually seen hung outside doors and windows in Japan in hope of sunny weather. They are thought to bring good weather if you hang them upright at night. However, be careful! Because if you accidentally hang them upside down, they can bring rain and gloomy weather. 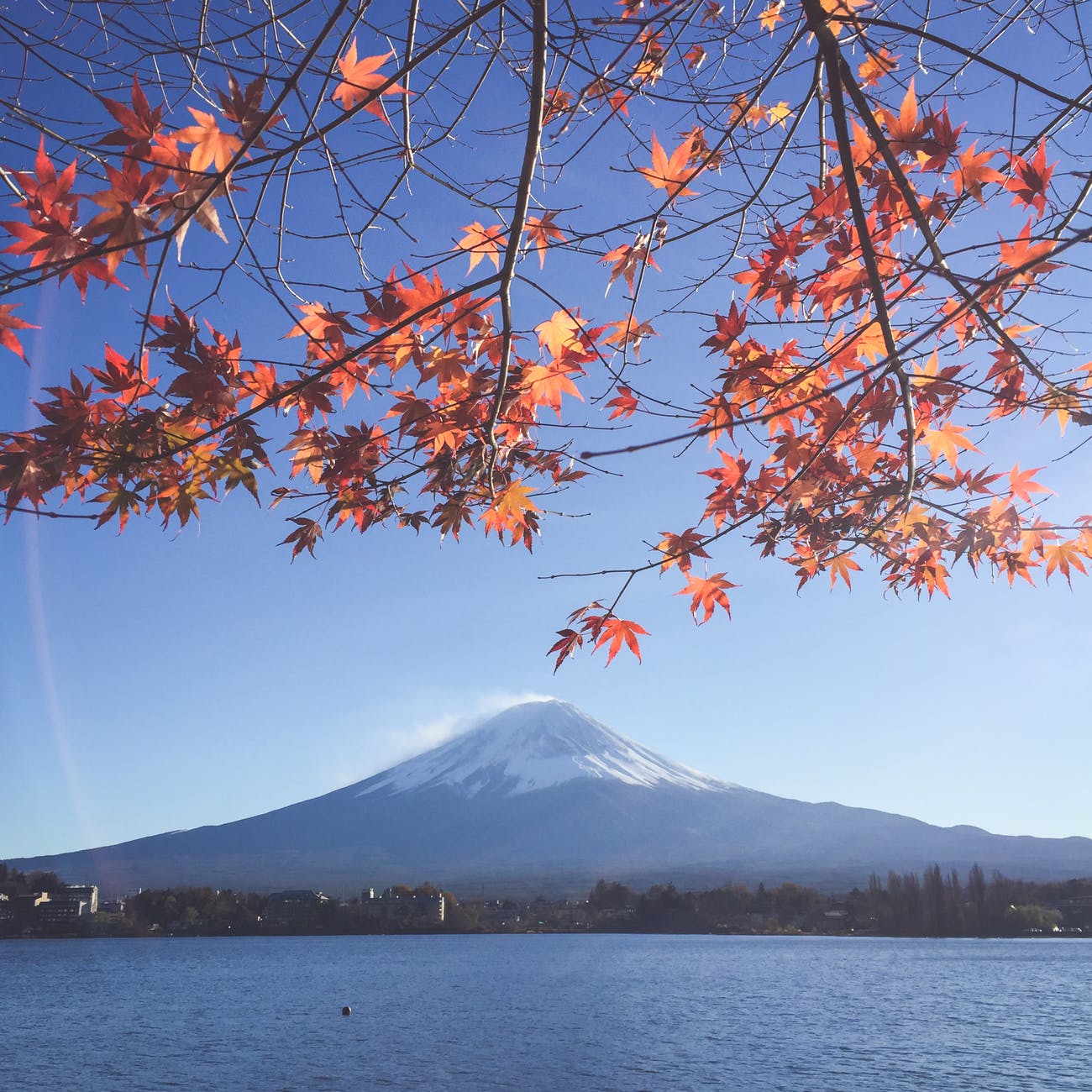 3. Hatsuyume (初夢)
Literally translated to “the first dream”, Hatsuyume is a way Japanese predict their fortune for the New Year based on the first dream after December 31st. Traditionally, there are three symbols indicating good luck for “Hatsuyume”: Mt. Fuji, a Hawk, and an Eggplant. Now you may wonder, why specifically these three combinations? Take a closer look at their Japanese words. Mt. Fuji originally symbolizes “Safe”, a Hawk (Taka in Japanese) means “Higher” and an Eggplant (known as Nasu in Japanese” represent “Achievement”. The Japanese believe that if you dream about one or all of these symbols, it will bring you good fortune throughout the year.

Have not dreamt of any of these symbols? Don’t worry, there are alternatives! Instead of Mt. Fuji, dreaming of tobacco is also said to produce a similar effect, because tobacco smokes rises to a great height!

Have not dreamt of any of these symbols? Don’t worry, here is a tip from to see a good “Hatsuyume”. In the past, the Japanese would do this one common practice, which was putting a Takarabune picture – an artistic and sophisticated drawing of a ship with the word “Treasure” written in Kanji on it – under the pillow with a palindrome such as  “長き世の 遠の眠りの みな目覚め 波乗り船の 音のよきかな” (“Nagai yo no tō no nemuri no minamesame naminori-sen no oto no yō kana”), your dream will become much better.

With your new-found knowledge of lucky days, lucky symbols and lucky food in Japan, will you be able to have luck be in your favor soon? Who knows, buying a lottery on Taian day, eating Ehomaki before an important test or dreaming of Mt. Fuji on the first day of New Year, you might see yourself receiving more good fortune than you could ever imagine! Have a simple try of luck and your life may change forever!

Did you find this article about Japanese superstitions interesting? Then check out the article below about Weirdest Rural Festivals in Japan: